Controversy and Confusion over the Covenant: Is it not time to settle it?

Controversy and Confusion over the Covenant: Is it not time to settle it?

Now this I say, that every one of you saith, I am of Paul; and I of Apollos; and I of Cephas; and I of Christ (I Cor. 1:12). Thus the inspired apostle Paul pointedly describes the party spirit in the church of Jesus Christ in Corinth. A church divided it was, contrary to the command of the apostle and of the Lord Jesus Himself. Paul severely rebuked the Corinthians for this division in their midst and instructed them to seek unity in the truth of Christ crucified.

Sad to say, the church on this earth has needed this biblical instruction—being rent many times by doctrinal disputes. A notable example of this is the difference on the sacrament of the Lord’s Supper that created a gulf between the great Reformer Martin Luther and the Swiss Reformers such as Ulrich Zwingli and Martin Bucer. What a shame, we say, that they could not bridge the gulf. It gave the church of Rome occasion to taunt the Reformers for their failure to be united on something so crucial as the sacraments. Indeed it caused bitter strife between these two branches of the Reformation.

Consider some of the debated aspects of the covenant. First, Reformed churches cannot agree on a covenant with Adam prior to the fall. Some insist that no covenant existed between Adam and God prior to the fall. If churches can agree that such a covenant existed, they cannot agree on whether or not Adam wascreated in a covenant relationship. Many maintain that God came to Adam after his creation proposing a covenant. Then too, disagreement arises over whether Adam couldmerit with God or not. And still unresolved is the relationship between the covenant with Adam before the fall and the covenant of grace established after the fall.

Concerning the doctrine of God’s covenant of grace, so many more issues need resolving. First, what is the covenant? Is it an agreement? Is it a promise, or perhaps a promise and demand? Is it a relationship of friendship? Is it a suzerainty treaty (between the sovereign King and His vassal)?

Then there is the all-important question: With whom does God establish the covenant? Some seem to teach—with all men. Most would limit it to believers and their seed, following God’s word to Abraham. But who exactly are “the seed”? All baptized children? Does God establish His covenant only with the Jacobs born to believing parents, or also with the Esaus? Is God’s covenant with Christ (the Seed)? And thus perhaps with the elect alone? But then why are all children of believers given the sign of the covenant, baptism?

This gives an idea of the conflict and confusion that currently swirl about the doctrine of the covenant. One well-known professor of a Reformed seminary, after setting forth two conflicting views of the covenant, introduced his view of the covenant with the comment that he was in “the muddled middle.” It was, I believe, intended to inject a bit of humor into his speech. Nonetheless, I fear that the comment is close to reality. The doctrine of the covenant is “muddled” in the writings of theologians, in the decisions of churches, and in the minds of Reformed believers generally. Although the term is frequently used, and the doctrine discussed, it is most often left undefined and rather vague.

What makes this so tragic is that the theologians and churches with these unresolved conflicts have bound themselves to observing the Reformed confessions—the Heidelberg Catechism (preached in their pulpits), the Confession of Faith (taught to their children), and the Canons of Dordt. Others are bound by the Westminster standards, which contain some explicit teaching on the covenant. Yet, in spite of their common confessional foundations, they cannot agree on these basic questions on the covenant!

And now, making things infinitely worse, cloaked by the covenant confusion, heresy is being surreptitiously introduced into some of these very churches. The heresy is not some minor, insignificant doctrine. Rather, it destroys the very heart of the Reformation, namely, the doctrine of justification by faith alone—the hinge on which, according to both Luther and Calvin, the whole Reformation turned. In this very issue of the Standard Bearer, Rev. Spronk (“All Around Us”) reports on the battle with the heresy of Federal Vision that is, it appears, worming its way into one of these churches. In earlier articles, both Rev. Spronk and Rev. N. Langerak have demonstrated that the heresy of the Federal Vision is founded on a particular view of the covenant.

The confusion and conflict over the doctrine of God’s covenant is therefore not only a shame on the Reformed churches, it is also threatening the very life of these churches.

It is also robbing God of His glory. God’s covenant of grace, His relationship with His people—a central part of the glorious saving work of God in Christ—and the church cannot set forth this beautiful truth except in a muddled, disputed form. This is intolerable. It should be intolerable for every Reformed preacher and every Reformed believer. We may not simply shrug it off as unavoidable, and each of us continue on his own path with a particular view of the covenant.

To be sure, there will always be controversy over and attacks on the doctrine of God’s covenant. Our adversary, the devil, is relentless in his attacks on all the doctrines of God, from creation, to the atonement, to the second coming of Christ. Unto the end of time, false teachers will seek to slip their damnable heresies into the church (II Pet. 2:1). But the churches that subscribe to the Reformed confessions ought to come to a settled doctrine of the covenant that is in harmony with and within the bounds of their confessions.

The doctrine of the covenant must be within the bounds of the confessions, and in harmony with those confessions, because the Reformed churches are confessional, and all their teachings must be so. The development of the doctrines of Scripture by the church can be compared to the work of building, as Paul does in I Corinthians 3. After using the agricultural figure of planting, watering, and growth to describe Apollos’ and his respective labors in Corinth, he makes use of the carpenter trade. He writes:

For we are labourers together with God: ye are God’s husbandry, ye are God’s building. According to the grace of God which is given unto me, as a wise masterbuilder, I have laid the foundation, and another buildeth thereon. But let every man take heed how he buildeth thereupon. For other foundation can no man lay than that is laid, which is Jesus Christ. (My emphasis, RJD.)

Then Paul reminds the ministers:

Surely this is not only appropriate for each minister as he labors in the church of Christ; it is also true of the church itself as it sets forth the truths of Scripture. In this sense the church of Jesus Christ on earth is actively building, always building. Yet the church must be building upon the right foundation, not on sand. Essentially the foundation is Christ, the chief cornerstone, together with the apostles, that is, the truth they set forth under the inspiration of the Spirit of Christ. The Reformed churches have adopted confessions, and every officebearer in them vows that “all the articles and points of doctrine” contained in the confessions “do fully agree with the Word of God” (Form of Subscription adopted by the Synod of Dordrecht, 1618-1619). That all by itself indicates that the foundation on which the doctrine of the covenant must be established is the Reformed confessions.

But that is not all. The fact is that the doctrine of the covenant is treated in the Reformed confessions. The Three Forms of Unity repeatedly call Christ the Mediator, which is a reference not only to His work of intercession, but also to His official position as Mediator of God’s covenant. Eleven times the Three Forms explicitly refer to the covenant, not counting the several times that the Canons reject the Remonstrants’ misrepresentation of the covenant. The liturgical forms drawn up by the Reformed churches in the Netherlands likewise give instruction on the covenant of grace, with at least eleven explicit references to the covenant (primarily in the forms for Baptism and the Lord’s Supper, but also in the form for the Confirmation of Marriage and the form for the Ordination of Missionaries). The Westminster standards have numerous references to the doctrine of the covenant, and an entire chapter of the Westminster Confession of Faith is devoted to the doctrine “Of God’s Covenant with Man” (Chapter 7), followed by the related chapter “Of Christ the Mediator.”

The point is, the doctrine of God’s covenant of grace must be set forth so that it is in harmony with the existing Reformed confessions. The Reformed churches who seek to clarify this significant doctrine must consciously do so.

The burden of this and subsequent editorials is a call, a plea really, that the Reformed churches strive to settle the controversy, clear up the confusion surrounding this crucial Reformed doctrine. The main point of the editorials is not to make a case for one particular form of the covenant, though the informed reader knows my conviction and commitment to the doctrine of the covenant as taught in the Protestant Reformed Churches. But it is not my purpose to make a case for my view or the teaching of the Protestant Reformed Churches. Rather it is simply to make the case that the Reformed churches must not allow this confusion on the covenant to continue.

With that goal, we look next time to a brief history of the doctrine of the covenant, and even at the very idea that a doctrine has a history of development.

¹ Note that I will use the terms Reformed and Reformed churches in the broad sense of those churches that hark back to the sixteenth century Reformation, both those originating on the European continent that go by the name Reformed, and those of Great Britain that go by the name Presbyterian. I recognize that the doctrine of the covenant developed somewhat differently in the two traditions, but both groups have a covenantal tradition, and both are struggling with the doctrine today. 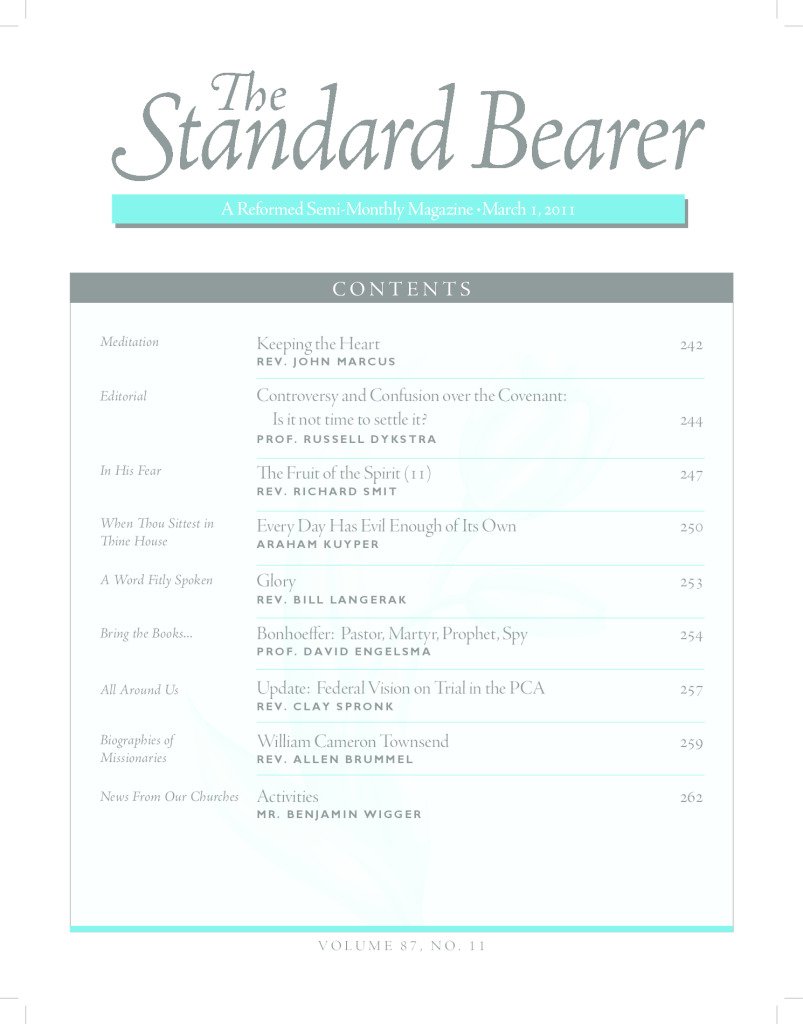