In the Standard Bearer of Feb. 1, I was greatly amazed what you wrote in your editorial “Classis, Jan. 9, 1952, Impressions.” I am rather surprised at the language you use in stating that the people out west are ignorant. I am sure that if you would take an aptitude test on the knowledge of the “Declaration of Principles”, and the Canadian Liberated immigrants, you would be surprised what we here in the west do know. The folks out west have a mind of their own. We, and I know I am speaking for many of our people, think for ourselves. I am sure it would be a good idea if you would first state facts about the ignorance of the west before you print such insults in the paper.

Again we see some more writings against two faithful ministers of the Gospel by the Reverends H. Hoeksema and G. M. Ophoff. Is this edifying to the soul? You may think it is. I am sure that no bles­sing is or will come out of these writings.

In conclusion, I am afraid you, Rev. Hoeksema, are making a misuse of your position of influence in our churches with respect to some of your fellow mini­sters. Especially in the way you write about them in the wrong light. You must not forget that your words still carry much weight with a lot of our people. Also when you write about your fellow ministers in a disparaging way.

With malice toward none,

2.  I did not write anything “against two faithful ministers”. I merely asked for an explanation in a matter that vitally concerns all our churches. I will continue to do so.

3.  Point out to me that I wrote in a disparaging way.

Allow me a reflection on your “Impressions”. Of course I refer to that part that concerns the Consis­tory of Randolph. In the main your recalling of information was correct and we also can agree with your over-all evaluation of this part, though we reserve thereby the criticism, if we would make any at all, of being too lenient or too charitable with Chatham. More about that later. Here, however, we wish to substantiate the information just as given, with the exception of the material as found on page 221 be­ginning with the last sentence in the second column. There we read: “Moreover, if I remember well—and I think I do—said party refused to partake of communion in the proper way, but insisted to have his baby baptized nevertheless, so that he demanded of the Consistory of Randolph to make separation be­tween the two sacraments, baptism and the Lord’s supper!” Now I would be able to defend the above evaluation of the matter because of the words “in the proper way”, but still would like to give the facts as they transpired here. On a particular Sunday, June 3, 1952, we administered both sacraments in the midst of the congregation. In the forenoon we celebrated the Lord’s Supper and in the afternoon service holy baptism was administered to another child of the con­gregation. The “said party” attended the table in the morning, but in the afternoon refused to have their child baptized. The reason, of course, was as you stated in your Impressions. This, from the nature of the case, could not be allowed to happen again and therefore the “party” was told that, unless he has his child baptized prior to the next celebration of Com­munion (which was imminent) he could not very well partake of Communion, because certainly attending the table presupposed the answer which he “could not and would not” give at Baptism. The “party” realized that this was the first step of others to follow and therefore, characteristically, asked for his papers, i.e., drew himself away from his solemn promise at the time of confession of faith. That promise, to “submit to . . . Church discipline” meant nothing at all. Had the Consistory Randolph taken any other stand it would have become guilty of desecrating (or becoming party to same) the Lord’s Supper. Therefore we hold that not the Consistory Randolph but the “party” was guilty of making a difference between the two sacraments and that the Consistory Randolph did de­sire to have the “party” make use of both sacraments, but that the “party” refused to have anything to do with either one. For to demand the celebrating of either upon a wrong basis is tantamount to refusing it . . . unless the Consistory would compromise (in which case it all would become mockery!). And so, we hope, dear editor, that it will have become plain too, that you in your words “they rather have recourse to slander and backbiting” were too charitable. Elide the latter and you have the truth of the matter.

We were not driven to write this because of any fear that anyone acquainted with the case might get the wrong impression, but because a one-sided pre­sentation and that unchallenged might have disastrous results if used by the “wrong party”; and also because of your insertion: “and if this is not correct, the Con­sistory of Randolph can set me straight”. 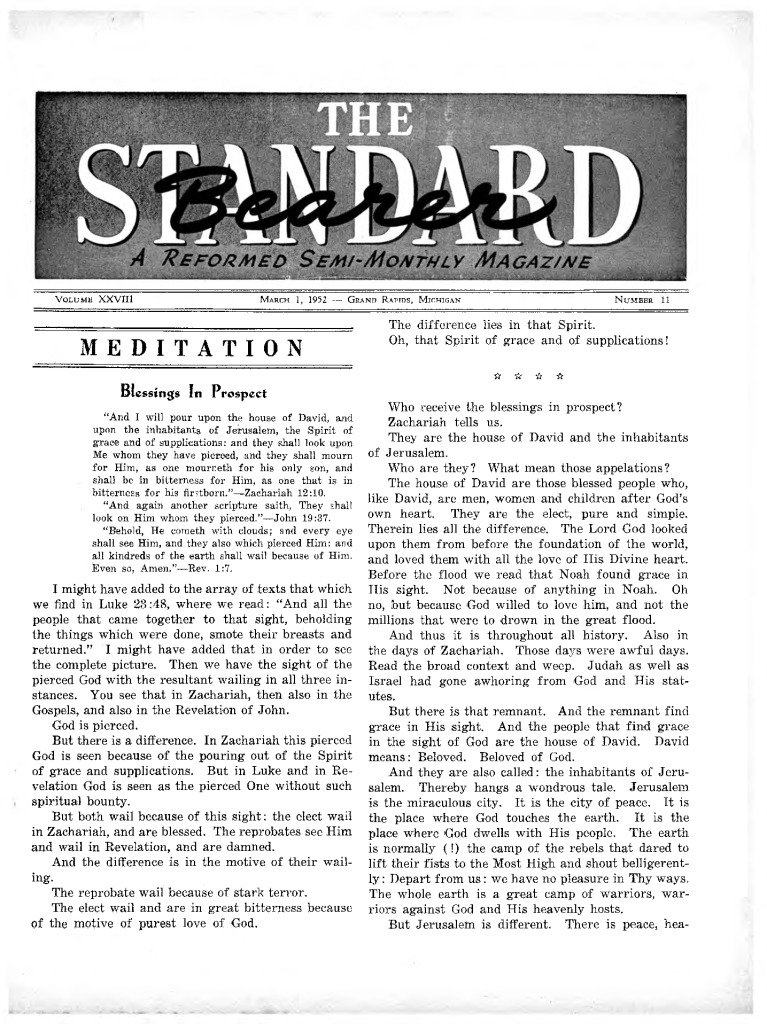