The article of Mrs. P. D. B., “By Their Fruits Ye Shall Know Them” in Our Church News of March 28, with which I wholeheartedly agree, prompts me to write these lines.

I was particularly interested in Mrs. D. B.’s article, since the poem referred to, which appeared in The Banner, also especially drew my attention as being very Arminian.

I wrote an article to Mr. R. Postma “Uncle Dick,” who is editor of the children’s page, on which page the poem appeared, and who approved very much of the poem, and asked him to place my article in The Banner. After waiting for about a month and receiving no reply on my article, I contacted Mr. Postma and also Rev. H. Kuiper, The Banner editor, who refused to place my article, and I had quite an argument with both of them. The reason why the article was not placed came down to this, “It was not in accord with the Three Points. It was one-sided.” “Not their-sided, of course.”

I requested again to have it placed and to have Mr. Postma write an article stressing “the other side,” and refuting my arguments, which they refused to do, so I am asking you, dear editor, to place my article in The Standard Bearer.

It grieved me to read in The Banner of February 21, the poem of Mary Van Houten, and it grieved me still more when I read your article above the poem. After all the child cannot be blamed, very likely never having been otherwise instructed. But I cannot understand how a man who reads and studies the Word of God, can approve of such a poem, and rejoice instead of grieve, to have music composed to such words.

“What will you do with Jesus?” is the first line. “I will reject and crucify Him” is the only answer the natural man can give. “No man can come to me, except the Father which hath sent me, draw him” Jesus tells us. And if God draws him, he does not boast, and say “I will take His hand” as the poem has it, but he says, “He will take my hand, and strengthen me to hold His hand. I have not chosen Him, but He has chosen me.”

“Jesus is tenderly calling,” we further read. Yes, He is tenderly calling. Who? His sheep, and they hear His voice and they follow Him, they cannot do otherwise, because He is their Shepherd. “Whatsoever the Father giveth me, shall come to me,” Jesus teaches us.

“Give Him your heart, oh sinner,” we further read. Surely we read in Proverbs, “My son, give me thine heart,” but not as it is represented here, as a God who is begging and pleading to give your heart to Him, but we have here a command to His child, “My son,” a command from Him, who speaks and it is done, and then He does not ask, “will you,” but he makes us willing and ready, and the son in whom that new life has been implanted can do nothing else, and will do nothing else but give Him his heart. It is a necessity for him to serve God with his whole heart, and he walks in those good works which God hath before ordained that he should walk in them, and again, all boasting is excluded.

And so we can go on with the other stanzas. Surely these words being sung by our covenant children, cannot be to the praise of our God, who is a jealous God, zealous for His honor and glory. May we never in any wise ascribe any honor to man, but let him that glorieth, glory in the Lord.

In all sincerity I would like to ask you, “What is there in the poem that you like so well?”

May we as covenant parents and teachers be found faithful in the instruction of our covenant children, and teach them sound hymns which are based upon that word, as these, “Not what my hands have done,” “On Christ, the solid rock I stand,” and many more. Then alone can we and our children have comfort, when we know that our salvation is sure, because it is not dependent upon us, for then we would be lost, but upon our Almighty God, who will surely perfect that which concerneth us, and will not forsake the work of His own hands. He is faithful that promised, and He takes our hand and leads us all the way.

Surely God deals with us as moral, rational creatures, and we work out our own salvation with fear and trembling, but we can be admonished to do so only because it is God that worketh in us both to will and to do of His good pleasure, and then we respond, we must respond, and we again confess that it is all of grace. We can be pleasing to Him only when we compose poems which make us nothing, and God all, when we teach our children to sing, “Nothing in my hand I bring, Simply to Thy cross I cling.” Then we and our children are on the right track, but we can never say to God, “Look what I’ve done, I’ve given my heart to Thee,” but in true humility let us sing, “All that I am I owe to Thee.”

May God give us much light and wisdom in order that we may train our covenant children according to His precepts, and ever give Him the praise which is due unto His Name.

I am writing these lines as a seeker of Zion’s welfare. Please receive them as such.

It is really deplorable that The Banner refuses space to its own readers for articles of this kind. The Standard Bearer is not afraid that open discussion will ever injure the truth. Hence, if Mr. Postma should feel inclined to defend his position over against Mrs. Jonker (who, by the way is none other than “Mr. M. J.” about whose identity we were wondering a few numbers back), we will be glad to place his contribution. 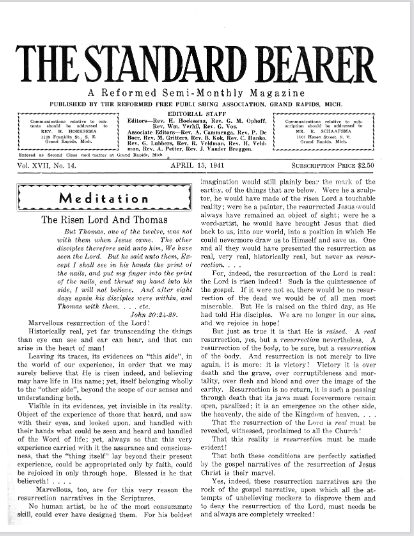