Will you be so kind as to publish the following open letter to my Christian Reformed friend and brother because I sincerely believe that there are many more Christian Reformed friends and brethren who should stop to think and diligently set themselves to answer the questions contained in it, and any other questions which may arise. Accept my thanks and my continued good wishes for the welfare of our Standard Bearer.

To my Christian Reformed friend and brother:

Do you think that the language used in I John 4:20 is fit to publish in the Banner? Permit me to quote the first part of this text: “If a man say, I love God, and hateth his brother, he is a liar.” The apostle of love certainly uses strong language, but one would hardly dare say it was unfit to publish. I quote again: “But he that hateth his brother is in darkness, and walketh in darkness, and knoweth not whither he goeth, because that darkness hath blinded his eyes,” I John 2:11. “Whosoever hateth his brother is a murderer; and ye know that no murderer hath eternal life abiding in him,” I John 3:15. It is just that serious because did you not say that you hated one of our Protestant Reformed ministers? Is he not your brother or is he perhaps a “publican and a sinner”?

Your churches love to emphasize texts like Luke 6:27, 28, “But I say unto you which hear, love your enemies, do good to them that hate you, bless them that curse you, and pray for them that despitefully use you,” for the purpose of creating and maintaining a doctrine of common grace. Pray, does not charity begin at home? How about loving the brother? A little common decency would not be amiss. One of the first principles of common decency is that an accused be permitted to defend himself through the same medium, of course, by which he was accused. However, where the office of believer is expected to function only through the pope and the priest one cannot expect such common decency. The sheep might not be able to read, much less judge, correctly.

May I exhort you to study the Scriptures, all the Scriptures, and the Reformed Confessions as well; in order that I and others may not feel constrained to ask whether or not you really are Reformed and whether or not you really have any desire to be Reformed. Do we not all say that we love God? “And this commandment have we from Him; that he who loveth God love his brother also,” I John 4:21.

Yours in the Lord, 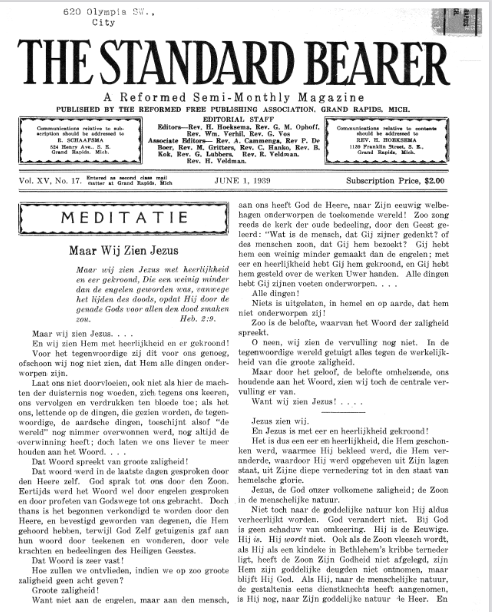