The above is a historical fact which neither you nor anyone who has studied history dare deny.

Now, it so happens that in our time, the Christian Reformed Church in America, of which you are a pastor, and I a member; lost also the TRUTH of the Scriptures and instituted in its seminary the doctrine of COMMON GRACE, expressed in THREE POINTS based upon the erroneous philosophy of NATURALISM, a sister of HUMANISM and MODERNISM.

A few ministers of this church objected to this doctrine as being a corruption of the simple and pure Biblical doctrine of SPIRITUAL GRACE.

These pastors, well known and well beloved by the churches, but hated by a younger generation of clergymen, were in an unauthorized meeting of their own brother pastors deposed and cast out of the Christian Reformed Church, while and after its SYNOD had declared them sound and doctrinally reformed.

These pastors, being honored and beloved by the congregations they served, remained their pastors, and what is more natural, sought as a Luther and a Calvin before them, to enlighten their brethren within the Christian Reformed Churches.

Like as the Roman Catholic Church strenuously objected against Luther and Calvin to set the LIGHT OF TRUTH again upon the chandelier, so today does the Christian Reformed Church object to having their own cast out brethren replace the LIGHT OF TRUTH within the sanctuaries of God.

Such is but natural. It is human, although ungodly and wrong,

That the leading element within the Christian Reformed Church is more interested in the theological phraseology and philosophies of its wise and learned men, than in the unsophistical, plain truth of the Word of God is exhibited upon the pulpits of the churches, with exceptions, but especially in its church organs.

How these publications are used to mislead the unaware can be seen in The Banner of the 11th of July, 1941, for in that number appears a letter of a certain Calvin College student, named A.C. Kett.

This particular letter is not an insult to the pastor whom he tries to blame but it is an insult to the love of TRUTH, to Biblical Spiritual grace, and to the intellects as well as Banner editors and Banner readers.

This letter is addressed to OUR PEOPLE, and therefore to the writer as well as any other member of the Christian Reformed Churches.

I do object to the sentiment of hatred expressed and the more so because the letter ends with the words, “YOURS FOR THE KINGDOM.” No doubt, but the student refers to the SPIRITUAL KINGDOM OF GOD, and that Kingdom is void of malice and hatred.

According to the spirit of that letter this KINGDOM is a Kingdom in which no one but a Christian Reformed student, pastor and layman have a place, which is abnormal and unbiblical.

In a very uncultural way this student informs OUR PEOPLE that “Rev. Kok, of Hoeksema’s church” was in the audience when he as student was preaching. Said the student: “No, he, Kok, did not preach. HE CAN’T DO BUSINESS HERE!” Think on that. The Synod of ‘24 declared Hoeksema sound in doctrine, but this student says: “HE CANNOT DO BUSINESS HERE.” In other words,—Sound doctrine is prohibited here, but the doctrine of error, of which I am a student, shall be peached here. Horrible!

That the HOLY SPIRIT has no hold upon this student is evident and plain to anyone who reads that letter. For, says the student, I BECAME ANGRY. What a confession. Being angry because a certain preacher is in his audience.

Is it possible that an angry man can preach the Gospel of LOVE and of TRUTH?

I became angry, said he. “No, not at him, because after all, he is paid by his church, must deliver the goods, and to them, the Jesuit saying: “Finis justificat modum” is still in force.”

MUST DELIVER THE GOODS. Is such a statement not an insult to the HOLY SPIRIT, to Jesus the Christ and to God?

Shame upon Rev. H. J. Kuiper, who dare to lower his church organ as a means to insult the Triune God, in order to wreak vengeance upon a minister of the Gospel who, as well as himself, is by GOD ORDAINED to preach the Gospel.

An urchin upon the streets of Sodom could not use any worse language to show his disrespect for the Holy things of God, than Rev. H. J. Kuiper sees fit to publish in a publication of which it was oracled that it speaks the language of Canaan.

Not only became this poor Calvin College student angry at Jesus for sending such men as Rev. Kok into His vineyard; but he also became angry at OUR PEOPLE to fall for his TACTICS.

That this student has not the least conception of THE KINGDOM OF GOD, is evident in his street- language. He has succeeded too express his ignorance, his hatred, and his lack of the Spirit of God in such a measure, that I would like to counsel Rev. Kok to remember this student in his prayers, and we ourselves are glad that we may comprehend that Jesus upon the cross prayed, FATHER, forgive them for they know not what they do.

Surely, if Calvin College is able to produce such students who possess such an erroneous conception of the KINGDOM OF GOD, then it is plain that the faculty of Calvin has sunken to the most degenerated spiritual level.

God may have grace and mercy upon my poor, beguiled MOTHER; its clergy has none, but a worldly grace as expressed in the Three Points, which in total deny the FIVE POINTS OF CALVINISM. 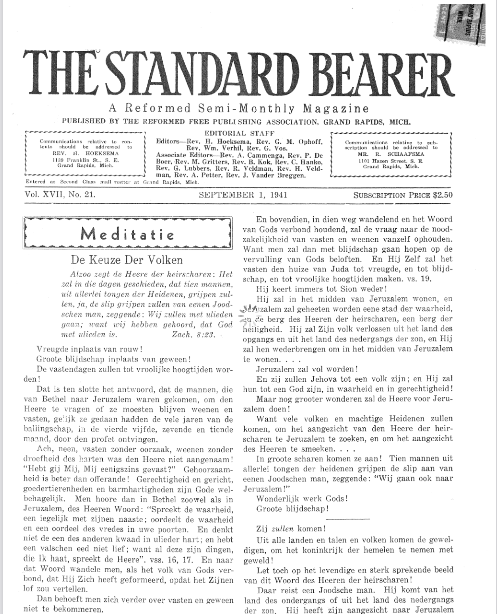