Considering the Contradiction of our Lord

Considering the Contradiction of our Lord

Rev. Moore is pastor of the Protestant Reformed Church of Hull, Iowa.

“For consider him that endured such contradiction of sinners against himself, lest ye be wearied and faint in your minds. “

By God’s grace, as we walk in faith, we face the opposition of Satan and the powers of darkness. Also the world of unbelief (the coworkers of the devil) tempts us and tries to destroy our faith. Besides this, we carry with us the old man which constantly assails us as we would walk down life’s pathway as the children of God. The holy writer in Hebrews 12:3 takes note of the fact that we can grow weary or faint in the walk of faith, as we come under the continual attack of Satan and his co-workers, and he would lead us to look to Christ the author and finisher of our faith. Lest then we should grow weary and faint in our minds in this battle of faith, he would have us consider Christ our Head. In this text he says, “For consider him that endured such contradiction of sinners against himself, lest ye be wearied and faint in your minds.”

Let us consider Jesus, who goes before us and who endured the contradiction of sinners Himself. We have also the cloud of witnesses that the writer has just mentioned in the former chapter, who likewise suffered contradiction. At their head and ours is Christ, who was contradicted above all. If we shall be contradicted for His sake, as we by grace walk as His body, then it is well that we consider Him, in order that we may be encouraged and know that we are so contradicted because we belong to Christ, and to know that even as our Head endured to enter into glory in victory, so by His grace we also shall endure.

The text teaches us that the contradiction of the sinners was against Himself. The contradiction that Jesus endured was not directed against only a particular doctrine or aspect of His walk, but against Himself, that is, against His person. It was directed against His whole appearance, all that He was. Already in the old dispensation in Israel there were many who would not be led by the law of the Lord, and who turned against the prophets that spoke in the name of Christ as it was the Spirit of Christ which was in them that did testify (I Pet. 1:11). The prophet is therefore led to say, in Isaiah 30:9-11, “That this is a rebellious people, lying children, children that will not hear the law of the Lord: Which say to the seers, See not; and to the prophets, Prophesy not unto us right things, speak unto us smooth things, prophesy deceits: Get you out of the way, turn aside out of the path, cause the Holy One of Israel to cease from before us.” And as the sinners contradicted the prophets of Christ, so would the sinners contradict Christ as He came into our flesh. Thus Simeon prophesied when holding the child Jesus, “Behold, the child is set for a fall and rising again of many in Israel, and for a sign that shall be spoken against” (Luke 2:34). Now during His whole life on earth these words were fulfilled in and against our Lord. And so it still is today as the child of God is contradicted, spoken against. It is Christ that is opposed by sinners and is the object of their contradiction, even as they bring their attack against His body, the body of believers.

Considering the contradiction of Jesus we see that, as He walked in our midst and preached the Word of His Father, they contradicted His teaching. There was never anyone who had his word more consistently contradicted than the Christ. When He preached the gospel to the poor and deliverance to the captives, the recovering of sight to the blind and the healing of the broken heart, fulfilling prophecy, they said, “Physician heal thyself.” When He said, “I am the bread of life,” they said, “This is a hard saying, who can hear it?” When He was teaching in Jerusalem, and they were unable to overcome His word, that is, they could not demonstrate any fault in it, they said, He is from Galilee: “Search and look: for out of Galilee ariseth no prophet” (John 7:52). This continued when our Lord rebuked the sinners. They would not hear, but accused Him of being a Samaritan, and having a devil (John 8:48). And as He replied to the unbelieving Jews that He is one with the Father, they called Him a blasphemer and plotted to put Him to death (John 10). Jesus said that the Son of man must be lifted up, that is, taken from this earth (signifying by what death he should suffer), and the sinners answered, “We have heard out of the law that the Christ abideth for ever, and how sayest thou, The Son of man must be lifted up?” (John 12:34). They took a part of the Word, took a passage out of context, to contradict the word of Christ. They refused to hear what the whole of the Word said. They contradicted the word of our Lord. And so it continues even today.

Jesus was also contradicted of sinners with regard to His works or deeds. We may take note that this also the Scripture well documents in order that we may be instructed thereby. Well known examples we can repeat. Jesus healed on the Sabbath, and the sinners said He was in transgression of the law. When Jesus sought to save that which was lost and brought the gospel to the lost, they said He was a companion of publicans and sinners. When in distinction to the Baptist, who was accused by them, Jesus came eating and drinking, they called Him a glutton and winebibber. When He cast out the devils, they said it was because He had partnership with Beelzebub, the prince of the devils. And when He performed the greatest of miracles, apart from the cross, and raised Lazarus from the dead, they said he was a danger to Israel, and plotted to kill Him. So Jesus was not only on occasion contradicted but the sinners opposed all of His mighty works.

But the sinner not only contradicts, stands opposed to Jesus’ word and deeds, but ultimately the sinner contradicts Jesus Christ Himself, as our text points out. The reason is that all of Jesus’ teaching and all of His works are concentrated in Jesus Himself. They were but means of Christ’s self-revelation as the Son of God, who is ever with the Father, and thus the revelation of God Himself unto man. In all that Jesus spoke and did He became revealed as the Christ who was sent into the midst of this world, sent as the anointed of the Father, sent as the promised Messiah who would redeem God’s chosen people and who would establish the kingdom of God forever. He, in all that He did and said, revealed that salvation is by grace alone, has its source in God and has its end in God. To God belongs all the praise.

The opposition of sinners against Jesus’ word and deeds was therefore basically this, it was an opposition to His being the Christ. The sinner does not want Him! The sinners do not want such a King over them. O, when He dwelt on this earth they wanted a king, but one who could serve all of their earthly needs and pleasure. They would not have a king who spoke of another country, and who is a heavenly one. They would not have a King that must suffer the reproach of man and die on the cross because of the sin of the people whom He would deliver. To desire such a King meant that they would have to deny themselves all glory and praise, and would require of them to confess their sin and to look only to the lowly Christ for salvation. This Jesus they hated with all of their heart. They would not be bound by the Word He brought, by the Word of God. All their opposition to His doctrine and deeds was thus aimed at Jesus Himself. They would not bow before God. And they meant in all of their attacks to remove His very name from the earth. So it is always, also .today as the sinner refuses to bow before the testimony of the Name of our Lord.

Finally, such contradiction must end in violence. They brought our Lord to the cross and crucified Him. Sinners would have, and do have, nothing to do with Christ. Throughout the new dispensation the enemies of Christ have not ceased to assail Him and the revelation of God through Him. He is yet contradicted on every hand; Again and again false teachers have arisen in the church, and, as Peter says, they are “denying the Lord that bought them” (II Pet. 2:1). As the attack is brought to the truth in the church, it is a denial of Christ. Also today, He still is the sign that is spoken against. And those that would hold to the gospel of Christ and live according to the word of Christ bear that contradiction of sinners. One stands either for or against, not a doctrine or truth, but the Lord. So the sinner stands against Jesus and against all that is of Him.

But lest we lift ourselves up in pride and point our fingers at others, we must understand that by nature we too are sinners that contradict Christ. We also by nature would not bow before God and confess our sin and confess that we are in absolute need of the Christ. We by our sin really also crucify Him. This is the condemnation of sinners! This is our condemnation as we stand apart from grace, all that we desire with regard to God and His Christ is in opposition to Him. We have contradicted Christ in thought, word, and deed. This we must confess! And if we do not confess that we are those who have contradicted Christ, we are condemned already, as the Scripture says in John 3. But if by the grace of God we see our own sin of contradiction, then the blood of Him whom we have contradicted is our salvation.

The child of God confesses his own sin in this, because Christ has suffered such contradiction and endured. He walked in obedience over against our disobedience, even to the death of the cross, and He endured. He satisfied God’s judgment against the elect sinner, and He ascended in glory to send forth His Spirit unto our hearts, that we may begin to flee contradiction and walk in the blessed obedience of sons.

Now, as by His grace we so walk, indeed we shall also suffer contradiction. And in battle we grow weary. But, considering the Lord, who is our Head, we may take courage. For surely as He has suffered Himself to endure contradiction even to death, so surely shall He sustain those that are contradicted for His sake. By His enduring contradiction, we are assured that no on can take our victory away. 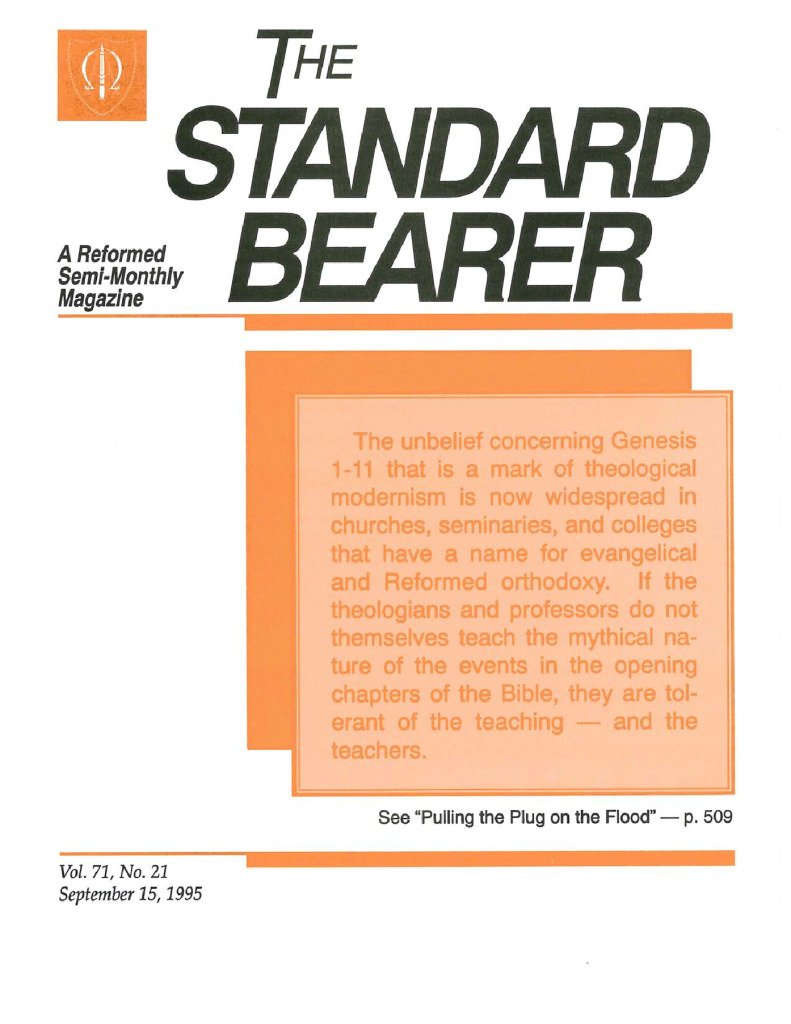