The title of Bredenhof ’s piece is “Personal Responsibility.”

His charge is that the PRC condemn as Arminianism a covenant doctrine that is, in fact, a doctrine that does justice to “human responsibility”:

So is it Arminian to insist on human responsibility? Of course, the Protestant Reformed allege exactly that. Followers of Herman Hoeksema, most notably David Engelsma, have insisted that we are essentially Arminian because we hold to the view that there are conditions in the covenant of grace.

I will exert myself to be blunt and simple.

Let Bredenhof apply himself to understand the fundamental issue.

Wes Bredenhof, the Canadian Reformed, and Klaas Schilder may hammer on this responsibility as strongly and endlessly as they think necessary, without objection from the PRC.

The issue is not responsibility!

The issue is not the responsibility of elect, regenerated Jacob to live the thankful life of covenant obedience.

Neither is the issue the responsibility of reprobate, unregenerated, but circumcised Esau to repent and believe and, thus, to live a life of covenant obedience.

We do remind Bredenhof and the Canadian Reformed that occasionally in their covenant theology they ought to do more with divine sovereignty than pay brief lip service to it, in order to commend their Reformed credentials. Bredenhof does this in his blog post. Having devoted the entire post to an enthusiastic advocacy of human responsibility, at the very end, in one brief line, he assures his readers that “I acknowledge God’s full and complete sovereignty.”

Not only the Protestant Reformed readers of the blog, but also all Reformed Christians expect from Bredenhof recognition of Romans 9’s teaching that there are two kinds of offspring of believing parents, elect and reprobate, Jacobs and Esaus, children of the flesh, who are not the children of God, and children of the promise, who are counted for the seed. Some are Israel; others are merely “of Israel.”

It is no denial, or even weakening, of responsibility to observe, at the very least, that the only possibility of a child’s fulfilling his responsibility of loving and serving God is God’s work of sovereign grace, uniting him to Jesus Christ, regenerating him by the Spirit of Christ, and causing him to believe. And that God works His saving grace in those children whom He has elected in eternal love. “Jacob have I loved.” God Himself declares, concerning His saving work of the covenant regarding the children of believers, “I will have mercy on whom I will have mercy.”

Treating of responsibility on the part of covenant children, of which responsibility faith and obedience are surely the outstanding response, Bredenhof has nothing whatever to say about sovereign, covenantal grace. About this, Bredenhof is silent. Except for the bare acknowledgment of God’s sovereignty, which, in view of his doctrine of the conditionality of covenant grace and salvation, rings hollow.

This clear teaching about, and emphasis on, divine sovereignty—concerning the children of believers, with regard to covenant salvation!—is not the special interests of the PRC and Herman Hoeksema, who suffer from a weakness concerning responsibility. But they are the gospel of Holy Scripture, which is concerned above all else to give the glory of the salvation of the children of believers to God.

The issue in the controversy of the PRC with the Canadian Reformed over the covenant is not responsibility. Not whatever!

Suspicious, dubious, and even reprehensible as the term itself is, the issue is not merely the use of the term itself. If one meant by the term “condition”—truly meant by it—only that in His covenantal salvation of elect children God requires faith as the means of justification and obedience as the way of gratitude to God for His gracious salvation, that is, the responsibility of the regenerated child of the covenant, we would urge better, less misleading, terminology, but we would not, on the ground of the careless term itself, charge heresy. Orthodox theologians in the past used the term, occasionally, to express responsibility.

Further, it is the covenant doctrine of Wes Bredenhof and the Canadian Reformed that God actually establishes His covenant in some, important sense, usually described as “legally,” with all the baptized children alike. Whether, however, the covenant comes to fruition in the salvation of children depends upon their fulfilling the condition of faith. Covenant salvation is conditional in that it depends upon the child’s faith. With all the baptized children alike does God establish His gracious covenant in an important sense. What accounts for the continuation and further development of the covenant in some only is their performance of the condition of faith.

It is to this conditionality of the covenant in “liberated” theology that the PRC object. It makes no difference that, when pressed to the wall (and they must be pressed to the wall before they make the confession), the “liberated” Reformed confess that some children fulfill the condition with the help of God’s grace. In fact, this changes nothing: It remains the performance of the condition by the children that is decisive. In “liberated” theology, the covenant and its salvation still depend upon the children’s performance of conditions.

I do not here prove my analysis of the covenant doctrine of Schilder, the Canadian Reformed, and the “liberated” Reformed. For one thing, I am confident that no one can challenge the accuracy of my analysis. For another thing, I have painstakingly demonstrated the “liberated” Reformed doctrine of the covenant from their own writings in several books, including The Covenant of God and the Children of Believers: Sovereign Grace in the Covenant; Covenant and Election in the Reformed Tradition; and Battle for Sovereign Grace in the Covenant [all published by the Reformed Free Publishing Association, www.rfpa.org].

I permit myself to demonstrate the grievous error of Schilder and of the “liberated” Reformed with one statement by Schilder himself, which I quoted originally in my The Covenant of God. “It belongs to the contents of the promise that has to be embraced in faith, that the Holy Spirit desires to sanctify us, (indeed) imparting to us that which we have in Christ (in the promise by rights).” This is Schilder’s explanation of the line in the Baptism Form that the infant children of believers, prior to their baptism, are “sanctified in Christ.” According to Schilder, the Holy Spirit has a gracious attitude toward all the physical children of believers. In this grace, the Holy Spirit “desires” the salvation of all the baptized children. Carrying out this gracious desire, God the Holy Spirit actually “imparts” to all baptized children that which they have in Christ, which can only be salvation in some form or other. But all of this gracious desire and gracious imparting are conditional, that is, depend for their saving efficacy and fruition upon the children’s act of believing.

This has nothing to do with (Reformed) responsibility. It is Arminian conditionality: The saving grace of God, which is wider than election, depends for the fulfillment of its purpose and for its efficacy upon the faith of the sinner.

The doctrine of the covenant of Wes Bredenhof and the Canadian Reformed is the conditional theology of Arminianism, with specific reference to the gracious promise to the children of believers and with specific reference to the saving of the children of believers. The gracious promise of salvation, the gracious desire of salvation, and even the beginning of gracious salvation are unavailing unless the children perform the condition upon which all depends. Grace—baptismal grace—is not sovereign. The Canons of Dordt in its entirety condemns this doctrine.

For Bredenhof, faith is not a God-given and God-worked gift to the elect children, by which means God bestows the grace of salvation. But faith is a condition by which the child himself effects the fulfillment in himself of God’s desire concerning all the baptized children that they be saved. Ignore the notion of merit, about which the “liberated” Reformed are loud in their claim that they deny it. A condition upon which the saving work of God depends is as much a heresy as Roman Catholic merit. Indeed, condition and merit are alike the offspring of Pelagius and Arminius. Condition as much as merit sins against the gospel of grace. The Canons of Dordt expressly deny that “faith…is…a condition of salvation” (Canons I, Rejection of Errors, Error 3).

The issue of the PRC with “liberated” and Canadian Reformed covenant theology is not responsibility.

I frankly confess that I am doubtful that this, or any other critique, will convince Bredenhof and his Canadian Reformed colleagues of the error of their covenantal ways. The reason for my doubt is the recent rise of the heresy of the Federal Vision, which by its own forthright and very public acknowledgment is simply the further development of the doctrine of the covenant of Schilder and the “liberated” Reformed. All the theological world recognizes that the Federal Vision is the open, bold denial of the gospel of grace, in all the “five points of Calvinism,” as confessed by Dordt. If Bredenhof and the Canadian Reformed Churches will not recognize the essential heresy of their conditional covenant theology from the development of it in the Federal Vision, they will not acknowledge the false doctrine in response to anything that I write.

The Canadian Reformed Churches and theologians not only are unable to condemn the Federal Vision but also defend the heresy, exactly because they recognize the Federal vision as the legitimate development of their own covenant doctrine—the doctrine of a conditional covenant.

What the Canadian Reformed Churches will not admit, the Federal Vision has proved conclusively. 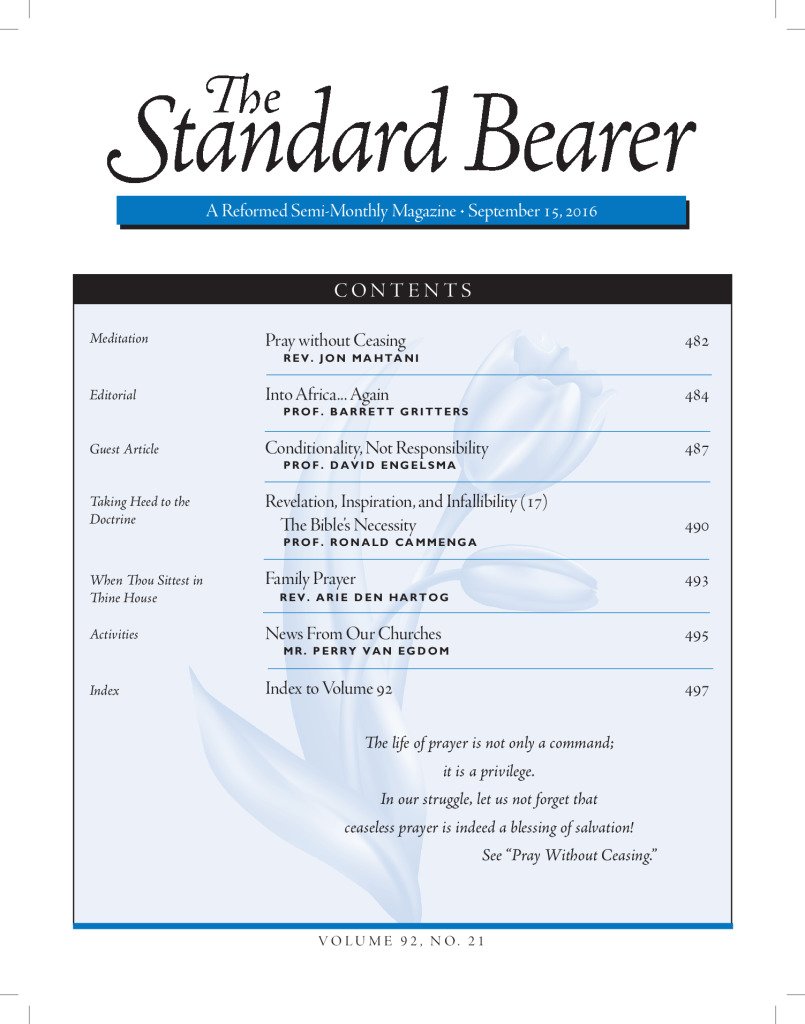