Coming Down: A Section of the Wall (concluded

Coming Down: A Section of the Wall (concluded

Last time we began to quote from the report we gave to the Mission Committee of our churches concerning the labors spent on the island of Jamaica and in our mission field there the months of February through April of this year. We began to point out how these children of God have received the Reformed Faith; and we continue now to show what has been accomplished by God’s grace among these of His children who differ from us in race, color, and temperament.

“As to the schooling with the ministers, I took along complete sets of the mimeographed outlines which Iuse at home in my class on Heidelberg Catechism for Juniors; and we went through the first eight lessons, school being held every other Tuesday because of the expenses and travel difficulties. Before leaving for home I drew up a set of 29 questions and answers on the instruction I had given; and when the ‘students’ pleaded for more copies and enough for each of those in their consistories that could read, I. had 50 copies mimeographed at the cost of $3.20. One Sunday morning we were gladdened to hear Rev. Ruddock drilling his people at Mt. Lebanon in Sunday School on these questions and answers as we arrived at church. The remarks of Elder Johnson of Lucea’s Congregation at the ‘farewell’ sermon April 19 were to the effect that Rev. Lubbers and I can be sure that what we taught the ministers in school at the missionary home in Coral Gardens, they in turn do bring to the congregations; and he thanked us for our labors. This work also must by all means be continued.

“The two highlights of the work during these twelve weeks came during those 21 days when the Meulenbergs were with us. We spent an enjoyable week with the six of us from January 27 through February 4. Then Rev. and Mrs. Lubbers left for Grand Rapids, and Mr. and Mrs. Meulenberg left for Florida. We then stayed alone for a month, and the Meulenbergs returned March 4 to remain with us till March 23. We were then alone again for a month until we left for home on April 22. But during those three weeks when the Meulenbergs were with us the conference was held at Reading, a district of West Lacovia, and Kenneth Brown was enrolled in Heralds High School to begin his training for the ministry of the Word of God in the Protestant Reformed Churches in Jamaica.

“I understand that the Mission Committee is already busy with the report of this conference, having been supplied with details by Mr. Meulenberg, so I will give no further report on this matter than to state that the churches are in the process of deliberating on this move. Several have already signed the agreement. (We have signed agreements from four of Rev. Ruddock’s five churches in our possession.) One or two have indicated that they are not ready to sign. One probably will not do so at all. We urged them to move slowly and to be sure of what they are doing. A man in the field while they come to their decisions would be very beneficial.

“Kenneth Brown has now completed some five weeks of school, and I was furnished with a report from the principal of the school—at my request—of his progress and abilities for study. The report is quite favorable. Her concluding remarks are, ‘I trust that at the end of this term when his report sheet is sent to you, there will be plenty of reason for you to be proud of the efforts you are expending on him.’ Incidentally, the name of the school is misleading; and upon finishing his studies there Kenneth will have the equivalent of a junior college education and not simply high school. And educational standards in Jamaica are high, the final examination and test papers being marked not by the local teacher but in England. Kenneth has signed a contract with us in the presence of Rev. Frame and myself and I am attaching a copy of it for the Mission Committee to keep in its files. I am including one also for Synod’s files. But Kenneth needs more than the $18 (Jamaican money, which roughly is $22 U.S. money) per semester, of which there are three a year. He needs room and board andencouragement, for he is a member of a divided family, being the only one belonging to the Protestant Reformed Church at Shrewsbury. And at school as well he stands alone.

“I also earnestly request our committee to consider advising Synod to release the building fund collections so that those churches which declare themselves willing to form the association of churches that will be incorporated as the Protestant Reformed Churches in Jamaica, and have placed or promise to place their properties in the name of the congregation can receive from this fund at once. The reasons are three in number: (1) This incorporation may take a year to be realized, (2) some of the churches need to buy land which is now available and may not be a year from now, and (3) some churches are badly in need of repairs and cannot hold services when it rains. (This matter has been taken care of, and while we were laboring in Jamaica and missed the committee meetings an arrangement was accepted whereby some help can be given at once from this fund to the churches in need, and more help can be given after they have become organized.)

“Finally, since this is the report and opinion of one, I strongly recommend to the Mission Committee that Mr. Meulenberg be asked to submit a brief report of his findings and opinion of the progress or lack of it in this field for Synod’s benefit and information. Elder Meulenberg was one of the first emissaries to the island. He has labored there with Rev. C. Hanko, Rev. G. Lubbers, and with myself and witnessed first hand the work and the reaction to the work. He has observed the field closely for some seven, eight years, and has just returned from it after seeing a concentrated effort of six consecutive months of labour. He is in a position to give the committee and Synod a valued evaluation of what has been done or needs to be done.

“On my own part, after four visits to the field from 1965 till the present, and after four periods of labour in the field I have found two significant elements which give hope for the future. Through these few brethren and sisters with whom we have been working a new sound is being heard on the island; and those around about them are beginning to become aware of such a sound that is so different from the Arminian messages that are so universally proclaimed today the ‘farewell’ sermon we pointed out to them what a blessing and privilege they have to be the only group on the island that knows this truth of the Reformed Faith and the Five Points of Calvinism. And we urged them to beware lest they fall from their steadfastness in that truth. We may be thankful to our God that through us the truth that shines so brightly in our midst now is reflected and sent forth also here in Jamaica by these brethren and sisters of a different color, race, and temperament. The truth IS being sounded forth by them. And the other element is that being attacked they fight back with the instruction which we gave them. This is indeed a blessing for them. For nothing strengthens the muscles of faith like a prayerful use of them in maintaining the truth. May our covenant God keep them in this faith and watch over them that they remain steadfast in that truth.”

To this report was added the following which was not possible when it was drawn up on April 29, 1970: “P.S. In verification of the last paragraph above I received a letter today, May 4, 1970, from Rev. Frame in which, referring to the blackboard instruction sessions which we had for the Lucea congregation in Middlesex, he writes, ‘The people outside of the church (who came in goodly numbers to these sessions) believe this truth, and as they talk with me they decide to add (join) the church at Middlesex, Praise the Lord.’ The Lucea congregation is moving to Middlesex where most members of the congregation live.

“And with the truth and instruction which we gave them (and by ‘we’ I mean Rev. C. Hanko, whom they still remember very keenly, and Rev. G. Lubbers, as well as myself) they do strive to defend this glorious truth. Kenneth Brown told us of an argument which he had with a young man at school. This young man insisted that God loves everybody and that therefore all children who die in infancy go to heaven, because they did not sin: Kenneth answered with a pointed question: What about those infants that died at the flood under that terrible wrath of God? Avoiding the point the young man responded that this was in the Old Testament dispensation and that today God deals differently. Kenneth again countered with a question: Does God, of Whom the Bible says that He is the same yesterday, today and forever, change?

“Indeed, it does one good to hear others defend the truth and to speak that which glorifies God rather than denies Him some of His glory. And it does one good especially to see this in those of another race, and color and temperament WHERE WE HAD NOT SEEN THIS BEFORE. To see a section of the wall come down and to see the hand of God lifting out of the Arminian man-exalting and God-debasing philosophies to place upon the solid ground of the truth that “Salvation is of the Lord,” as Jonah stated it, and that God is the alpha and omega of our salvation as well as of our creation, and that in Him we live and move and have all our spiritual as well as our physical being, is indeed a joy. To see and hear men with black skin stand beside us with white skin and give God ALL the glory is a thrill we would like to have all of you experience.

“In a day and age when so many drift from the truth into Arminianism and Pelagianism and from them into modernism, it is like rain upon the dry ground to witness a turning to this truth of the Reformation and to see the fulfillment of the words, “The ends of all the earth shall hear And turn unto the Lord in fear; Allkindreds of the earth shall own And worship Him as God alone.” 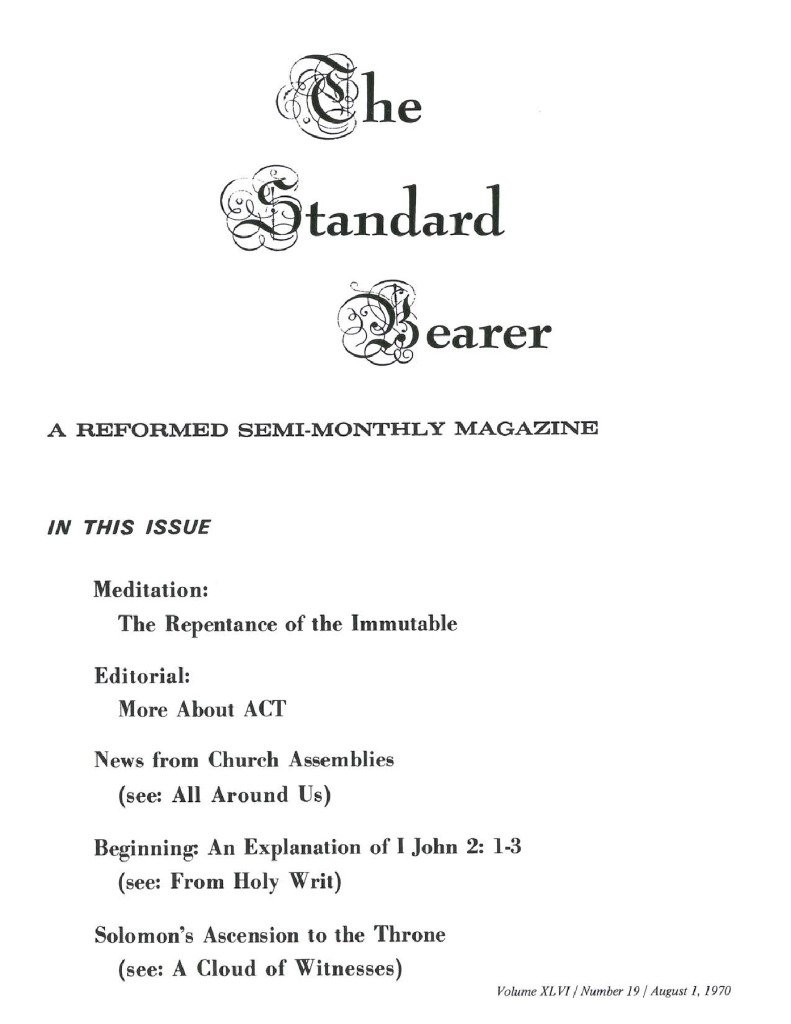