As I am writing this we are still in the old year. By the time that you read it we will already have passed into the new year.

Three hundred and sixty days have come and gone. Much of what has happened in the past year is already forgotten; much more will fade from memory before very long. Yet every moment of every day is become a part of the record of God, waiting to be revealed in that Great Day when the Great White Throne is set up and we shall all be called to give account of the deeds done in the body. There is something very final about that, for what is written is written, and absolutely nothing changes that.

Our present day world is glad to turn its back to the old and look forward to the new.

You will say that this has always been the case, and I agree. Yet there is a difference. The cry for change is louder now than ever. The old is vehemently condemned and rejected; eagerly every one (almost everyone, anyway) looks for a “better” tomorrow.

It is quite commonly agreed that we are living in a time of universal upheaval and revolution.

The people in the ghettos cry for something new. The students in the universities clamor for the new. Everyone wants to do his own “thing” in his own way. In general, it seems that every one is weary of the old “establishment,” and wants something different without actually knowing what he wants.

Some cry for restitution for past offences, as do the Negroes throughout the country and the Indians on Alcatraz. Some want a better distribution of wealth, pinning their hopes on prosperity as a solution to all the world’s ills.

Even the church is in unrest. Especially the younger generation opposes the church institute with its offices, its preaching of the Word as the chief means of grace, and its form of worship. They clamor for no one knows just what, but it must be different, it must appeal, it must create an ‘experience,’ or ‘turn one on.’

But obviously God is not in all their thoughts and His Word is not their guide.

Now Scripture has spoken of the new as long as there was a written Word, referring back even to the dawn of creation. Does no one take note of that?

God reminds us of this very thing in the prophecy of Isaiah. He says: Behold, the former things are come to pass, and new things do I declare: before they spring forth I tell you of them” (Isaiah 42:9).

Before I say anything about this, please notice the verse preceding this wonderful announcement. There we read: “I am the Lord (Jehovah): That is My Name! Ana My glory will I not give to another, neither My praise to graven images.”

The coming of Christ is the big new thing in history.

This promise is repeated in chapter 43, verse 19: “Behold, I will, do a new thing; now it shall spring forth; shall ye know it?”

That new thing was the birth of the Savior. That is something new! It makes an end of the old and introduces that which is eternally new. Who ever heard the like of it? Jesus born of a virgin. Life from death. The clean born from the unclean. Total defeat of all the powers of darkness—sin, Satan, world, death, and the grave. Eternal victory unto life everlasting in a new and perfect heavenly creation.

From that birth of Jesus, as wonderful as it is in itself, follows the Cross and THE Resurrection. A new thing! God was in Christ bringing reconciliation for the sins of His people by that one and only perfect sacrifice of His dear Son for our sins. A new thing: Christ arose from the dead to live and reign forever as Head of His Church and Lord over the whole universe.

That was the beginning of the new creation breaking forth in a world of death, which soon must pass away.

That is new for us in the sense that now we are crucified with Christ, risen with Him, and set at God’s right hand in the heavens with Him. (If you question that last statement, please look up Ephesians 2:5, 6.)

This is so completely new that only faith, wrought by the Holy Spirit in the heart, can grasp and appropriate it!

And now let us turn to II Corinthians 5:17, “Therefore if any man be in Christ, he is a new creature: old things are passed away; behold, all things are become new.”

Scripture refers here to regeneration. For the child of God all things have been made new. He is a new creature in Christ, engrafted into Christ, to draw His life from Christ. With a new heart he sees through spiritual eyes, hears through spiritual ears, and speaks through a spiritual mouth, revealing in word as well as in deed that for him all things have become new. Although his sins are as scarlet, he knows that he is righteous and sinless in Christ. Although by nature he is still so depraved that he is incapable of any good and inclined to all evil, yet he is a saint in Christ, belonging to that holy people whose God is Jehovah. He is friend-servant of God, a member of the Royal priesthood of believers.

No one can express that better than by joining in with the writer of Psalm 34:3-6:

“O magnify the Lord with me, and let us exalt His Name together.

I sought the Lord, and He heard me, and delivered me from all my fears.

They looked unto Him, and were lightened: and their faces were not ashamed.

This poor man cried, and the Lord heard him, and saved him out of all his troubles.”

And finally, will you turn to Revelation 21:5?

“And He that sat upon the throne said:

‘Behold, I make all things new.’

That brings us face to face with the new creation. That gives us a glimpse of the holy city, the new Jerusalem, the church, coming down from heaven, prepared as a bride for her husband.

That is the new covenant fully realized in intimate fellowship of friendship between God and His people in Christ, there where all is new.

We stand amazed. Eye hath not seen, and ear hath not heard. It is even scornfully rejected by the fondest of human imaginations. But God reveals it to those whom He loves. He gives them the eye of faith to see, and the ear of faith to hear the heavenly mystery.

For that is all NEW. 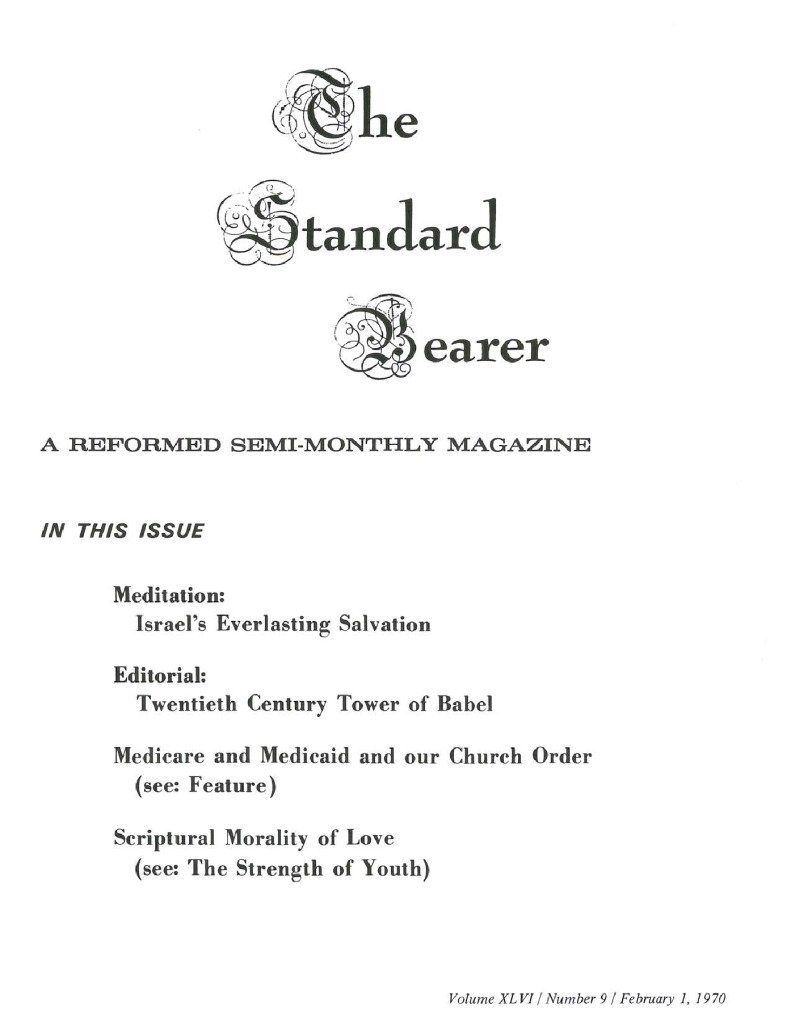