About a decade ago, a poem appeared in the Netherlands which was entitled, “The Message.”¹

In this poem the author writes about the mandate that comes from God to the faithful minister of the Gospel, “Go, tell the church. that a severe storm is approaching.”

To this the minister responds: “But there have been many storms raging for many days and many years.”

He is told: “Though that may be ever so true, the Great Storm is about to break loose.”

But the minister counters: “Lord, the people have heard that so often that they disregard it entirely.”

He even adds in bitter complaint: “This people craves sports and bread, ever more bread and ever more sports. No matter how much they have been warned, they smile and dance, and remain totally indifferent to any warning. There are but a few—mostly women and children—who still show a semblance of concern.”

And then when the minister has poured out his soul in bitter complaint, he is told, almost impatiently: “Prophet, arise! Prophet, prophesy! My people must repent before I come in judgment upon the earth.”

First, one is reminded of the time of king David, “And the conspiracy was strong; for the people increased continually after Absalom.” II Samuel 15:12.

Second, one thinks of the parable of the ten virgins: “Then shall the kingdom of heaven be likened unto ten virgins, which took their lamps, and went forth to meet the bridegroom. . . .While the bridegroom tarried they all slumbered (or dozed) and slept.” Matthew 25:1, 5.

When has the conspiracy against God and His church ever been stronger than it is today? And it grows day by day.

The very foundations are shaken.

What has happened to the Five Points of Calvinism for which our fathers fought with blood and tears: Sovereign Election; Total Depravity; Limited Atonement; Efficacious Grace; Preservation of Saints?

And as if that were a small thing, the infallibility of the Scriptures is flatly denied. The Bible is considered a collection of myths, traditions, old wives’ tales, but no longer the verbally inspired and authoritative Word of God that is the only power of God, unto salvation!

Along with this, the miracles of Scripture are denied. Whatever does not harmonize with the findings and deductions of the unbelieving scientist must be rejected. So there goes the creation account Genesis 1 and Genesis 2; along with the revelation of God concerning our first parents, the serpent, the tree of knowledge of good and evil, the temptation, the fall, and all its consequences for us. What happens to the virgin birth, the cross, the resurrection, the ascension, Christ’s second coming?

The Confessions are shelved; the Bible is cast aside; the church institute is scorned. The preaching of the Word is no longer considered God’s marvelous power unto salvation; it is not even considered relevant for such an age as this. Church worship is degraded into a social get-together; the sacraments are corrupted into “love-feasts.”

Everything must go. Even heaven and hell. Yes, even God. Man must have his whim, that he may be exalted as God.

No wonder that denominational walls crumble before the impact of ecumenicity. Small wonder that the World Council of Churches with all its modernistic tendencies gains in popularity. The harlot of Revelation 17 is taking her place on the red horse, dressed in purple and scarlet, decked with gold, precious jewels and pearls as gifts from her lovers. Church and world, religion and politics, philosophy and “faith” go hand in hand down the road that dead-ends in hell.

And the virgins remain complacent; some dozing, some sound asleep. The bridegroom tarries too long; the interest has turned to bread and sports, ever more bread, more luxuries, more complacency in the things of this world.

I read an interesting item in the newspaper a short time ago.

It began: “Catholics and Protestants have been enjoying their ecumenical get-together for almost a decade now.”

It went on to say: “The exciting topic in religious circles is the growing togetherness of Christians and Jews. . . .” The gates of God are open to all. The Christian need not go via Judaism, nor the Jew via Christianity, in order to enter in to God.”

But then this: “If we are to realize the high potential of this God-given scene, the Christian community needs to do some housecleaning, like a careful self-examination of all Sunday school materials put out by the various denominations. Too many of these have old-line, unreconstructed comments about the Jews killing Christ (Emphasis added) and the necessity of bagging more Jewish converts. The majority of our church leadership today no longer believes this doctrine and it is proper to clean it out of the textbooks.”²

And then he goes on to say that something will have to be done about the right wing fanatics, who pass along their fanaticism sometimes even in the form of Christianity.

Strange that remarks like that should come from areas where a universal brotherly love is emphasized. (Maybe not so strange). But brotherly love does have its limitations, it seems. It has no use for those who refuse to be conformists. One is reminded of what Jesus once said: “If ye love them which love you, what reward have ye? do not even the publicans the same?” Matthew 5:46.

The time may not be so far off that “narrow-minded, bigoted” people, who have no room in their theology for other views and other gods may find their church doors under padlock, and may have to worship in secret. The bodies of the two witnesses may soon be lying dead on the streets of the great city, “which spiritually is called Sodom and Egypt, where also our Lord was crucified.” Rev. 11:7, 8.

It is later than we think.

It need not surprise us when these things happen.

The Old Testament already spoke of prophets who prophesy falsehood. Jeremiah 14:14, and other passages.

Paul warns: “For the time will come when they will not endure sound doctrine, but after their own lusts shall they heap to themselves teachers, having itching ears; and they shall turn away their ears from the truth, and shall be turned to fables.” II Timothy 4:3.

Many more passages could be added, but this is enough.

The church must be aroused and alerted.

“Prophet, prophesy!” That is the mandate. The end of all things is at hand. The church must be aroused and alert.

Your redemption draweth nigh! 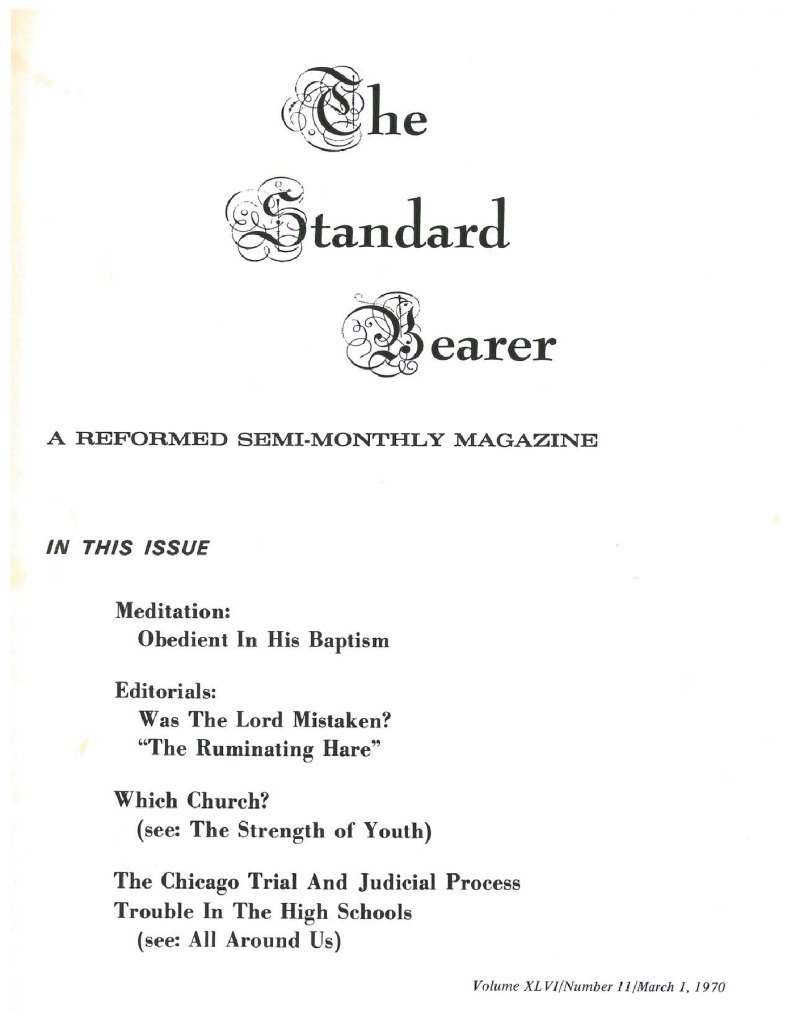