There is an old dictum (I am probably not quoting it exactly) which goes; “He who will not learn from history’s mistakes is doomed to repeat them.” In a sense, we take this dictum: very seriously in the Seminary. It holds true, and was originally formulated with a view to, world history. Nations and peoples who do not know history and have no appreciation for what has happened in the past are ignorant of the sins of long ago: In ignorance of them, the same sins are repeated again and again—with the gravest of consequences. We see this happening in the world all the time. That which brought the Roman Empire to its knees a millennium and a half ago is bringing upon America and Western civilization the same destruction.

But if this is true in world history, it is much more true in the history of the Church of our Lord Jesus Christ. And the consequences are more serious. We are speaking, after all, of the Church, that one body of believers in the world which is so important that all history has to do with it and with it alone. The Church which will not learn from its own history is a Church doomed to make the same mistakes which brought ruin and desolation upon the cause of Christ in the past. How else can one explain that the same old heresies which raised their ugly heads in years gone by are heresies which reappear in today’s Church world? Is the true and essential divinity of our Lord Jesus Christ denied today? Indeed it is. But the heresy is no different from that which brought havoc in the Church over 1500 years ago. Arminianism, as our Canons say, is the age-old heresy of Pelagianism resurrected out of hell. Yet Arminianism controls the life of the Church in large measure up to our present time. The evils are as great; the devastation brought about by it is as terrible.

I suppose that many would be shocked to learn that our Seminary has no fewer than six semesters devoted to a study, of the history of the Church. Church History is not considered all that important in today’s Theological Schools. This is not to say that there is no instruction in Church History; but, as often as not, this instruction is cursory and considered relatively unimportant. The reason is obvious. Today the plea is made for a gospel which is relevant to our modern times and can address man as he lives in the Twentieth Century, in our modern scientific age—an age when old truths are out-of-date and when new truths are called for. If the history of the Church is studied at all, it is studied because it is always somewhat interesting to erect museums which have on display ancient artifacts and which will satisfy people’s curiosity as to how others lived in bygone years. So, presumably, students who aspire to the ministry of the Word ought to have some passing acquaintance with the oddities of the Church of long ago so that, if necessary, they will be in a position to satisfy the curiosity of their parishioners should the question ever arise: “How did people do these things once upon a time?” And so Church History has taken a back seat to more contemporary studies; and, indeed, there is, in many areas of the Church’s life, a concerted and deliberate attempt made to disparage Church History and to wean the people of the Church from their heritage.

A total of six semesters! That is a great deal of time to be spending on the past!

What do we do with all that time?

The regular Church History courses are four in number. The first course deals with the history of the Church from the time of the apostles to the time of the Semi-Pelagian controversies of the Fifth and Sixth Centuries. In this course the students are required to learn about the history of the post-apostolic Church; the history of the great trinitarian and Christological controversies which filled the Church ,with turmoil but brought forth the great creeds of Christendom: The. Nicene Creed, the Chalcedonian Creed, and the so-called Creed of Athanasius. They will be exposed to the bitter battle which, the great Church father Augustine waged against the heresy of Pelagianism, the father of all Arminianism. They will have to know how the, devil sought by devious means to destroy the Church through every conceivable heresy and how God raised up great men who stood fearlessly for the truth though all the world was against them. They will have to learn how the Church argued and fought about the dates when Christmas and Easter would be celebrated; how the saints endured bitter persecution under the heavy hand of imperial Rome; how the evils in the Roman Catholic Church began in this period already when the calendar of the Church was crowded with, holidays for saints, when men sought holiness by sitting for years on the top of poles or letting bugs bite them in the desert sands of North Africa, when a hierarchy of clerics arose in the Church to rob the people of God of their office of all believers.

The second course leads the students into those strange years called the Middle Ages, when popes fought with kings for power and riches, when the truth seemed almost lost in the errors, of Romish thought, when those who defended the, truth of Scripture were tortured and burned at the stake, when Rome ruled the world and the antichrist, sat upon the “throne of Peter.” There is much to learn here too; but there is great difficulty in finding the true Church of Christ. It is not always so easy to see that there are always seven thousand who have not bowed the knee to Baal. And just as newspapers record, only the bad things that happen, for these things are the news, so history records only the history of a church become corrupt—so corrupt that she lost completely the power to reform herself. But the Church was there, sometimes to be found in the strangest places; God preserves His Church.

The third course deals with the Reformation and concentrates upon the mighty and glorious work of God in restoring the Church to doctrinal purity. The names of the great men of God ring down the centuries: Luther, Calvin, Knox, Beza, Cranmer, Ridley; Latimer, and a host of others.

The fourth course must cover all the history of the Church from the Reformation till today, but it will give to the students most of all a knowledge of their own unique heritage: the Reformed faith as that developed in the Netherlands and in this country. It will bring the students to our own Protestant Reformed Churches and the place in the history of the Church which God has given to us.

Added to these courses are two more which trace the history of the development of doctrine from the time of the apostles till the present. These are separate courses and are intended to concentrate especially upon the truth as the Spirit of Truth led the Church into her confession of that truth. So once again the student is led through the whole of New Testament times; now to look at all this history from the viewpoint of the doctrines which developed until the present.

Why are all these courses so important?

There are many answers, to this question, a few of which ought to be mentioned.

Presupposed in all this is a particular view of Scripture. Those who take the position that history—whether of the Church or of doctrine—is relatively unimportant do so with a definite view of Scripture in mind. This view of Scripture is not always explicitly stated, but it lurks in the background for all that. History is irrelevant because Scripture does not set forth an objective, fixed, and authoritative body of doctrine to which the Church can hold in every age. Just as many of the things taught in God’s Word are time-conditioned (the views of the people of Bible times, irrelevant to modern man), so the doctrines which the Church confessed are the passing fads of a particular era, conditioned by the times, relevant for the moment, but ever changing and never sure. The Church today needs new doctrines, new truths, new expressions of her confession if she is to be truly relevant. Gomarus is as outdated as Augustine and Calvin as outdated as Athanasius; Knox is as outdated as Gottschalk and, presumably, Luther is as outdated as Paul.

The importance of Church History is based upon the firm conviction that Scripture is the infallibly inspired Word of God which is given to the Church as the revelation of Jehovah God in the face of our Lord Jesus Christ. It contains the whole mystery of salvation which to believe is to be saved. It is everlastingly sure and fixed and relevant for the Church in every age. The history of the Church and of her doctrine is the history of God, through the preaching of the Scriptures and by the work of the Spirit of Christ in the Church, gathering, defending, and preserving His Church until the end as He leads that Church into all truth. The history of the Church is the demonstration of the marvelous work of grace. It is the exciting adventure of the marvelous work of grace. It is the exciting adventure of the full realization of the work of Christ in the salvation of the elect. Amid the cries of martyrs who loved not their lives unto death, in the crash of’ the battles for the defense of the faith, through the triumphs and tragedies of a Church living in every age, one comes face to face with the truth: upon the rock which is Christ God builds His Church and the gates of hell cannot prevail against it.

It is necessary to know that truth. When Israel forgot the wonders which God performed for the nation, Israel went apostate. When the Church does not know her heritage, the Church loses her heritage and joins Laodicea in being spit from the mouth of Christ. A Church which has no appreciation for the blood of martyrs will not be faithful until death. A Church which does not understand the subtleties of Satan in his fierce attacks against the truth will be easy prey for every wind of doctrine. A Church which does not appreciate and give thanks to God for the work of the Spirit of Truth in leading the Church into all truths will be a Church that despises the truth and sells her heritage for a mess of worldly pottage. A Church which will not learn from the mistakes of the past is doomed to repeat them. But a Church which lives out of her past is a Church vibrant with life and power in this present age to fulfill her calling before God. 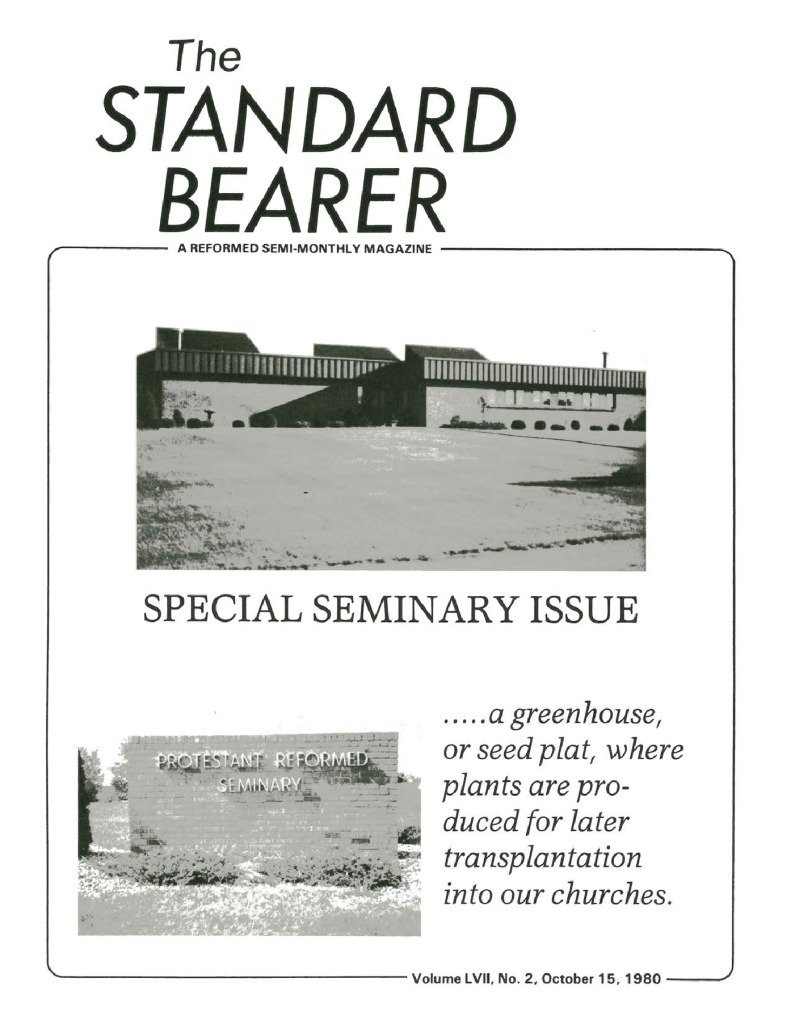