In 1942 the first draft of the Constitution of the Mission Committee of the Protestant Reformed Churches was forged and proposed to the synod of that year. The second paragraph of the proposed pream­ble to the constitution carefully expressed the sentiment of many in the churches at that time.

We believe that this missionary activity includes the work of church extension, and church reformation, as well as the task of carrying out the Gospel to the unchurched and heathen. Although we look forward to the time that the way will be opened for us to labor among the heathen, both here and abroad, and among the dispersed, we are convinced that our present duty still lies in the field of church extension and church reformation, wherefore we conceive of our present field to be among our Reformed brethren that are deviating from the old and beaten paths of our Reformed heritage (1942 Acts, pp. XXIV-XXV).

This draft was placed under the scrutiny of a commit­tee of pre-advice at the synod of 1942. After some study of this proposed constitution the committee offered to synod its revision to the above paragraph:

The ground for this abbreviated alteration to the preamble stated, “This phraseology not only has the advantage of greater brevity, but also to our mind avoids any possibility of misunderstanding as well as unneces­sary limitation.” This was approved by Synod of 1942 in Article 20.

Both the initial submission of the preamble to synod and the revision of it reveal the thinking of the Protestant Reformed churches at that time.

In the first place, at that time, in the mind of many, church extension and therefore domestic mission work should focus on laboring “among our Reformed brethren that are deviating from the old and beaten paths of our Reformed heritage.” In other words, they believed that their mission work consisted in laboring among members in the Christian Reformed Church in an attempt to per­suade them yet of their error. This was church reforma­tion.

In the third place, the synod of 1942 envisioned a time when our mission work would no longer be limited to church reformation. Notice what was proposed initially to synod of 1942: “Although we look forward to the time that the way will be opened for us to labor among the heathen, both here and abroad, and among the dispersed, we are convinced that our present duty still lies in the field of church extension and church reformation” (emphases mine). Although this entire sentence was elided in the final draft of the Mission Committee Constitution, nevertheless the vision remained the same. Our fathers understood that domestic mission work certainly includ­ed (and still includes) the labor of church reformation, yet is not limited to this labor, but of necessity must be broader in its scope. They even “looked forward” to the time when the way would be opened to carry the gospel to the unchurched and heathen both in the United States and abroad. We wish to examine in a number of articles whether that time has come.

To do this we need to have a clear definition of the terms before us.

To extend means to enlarge in scope or to increase in size. When applied to the labors of the church, it refers to the desire of the church to enlarge its scope or increase its size by means of her witness to those outside the bounds of her institution. This does not mean, of course, that the church is numbers-orientated. Church extension is not utilitarian in its purpose but is truly concerned with the salvation of God’s people. The desire of the church is that through her witness sinners might be brought to faith and repentance and might seek to join themselves with the cause of Christ in this world. Yet, it is by this means that the church is extended.

Traditionally the term “church extension” has been used to refer to two types of work in the Protestant Reformed Churches.

The first is the effort that the local congregation puts forth through various means to gain new members to its congregation. The congregation is involved in church extension, that is, an effort to increase its size by adding members. Each individual congregation, through the preaching of the gospel and other means, such as the printed page, Internet, radio ads, sponsoring lectures, etc., publishes and declares to those in the locale of their church the good news of the gospel. The hope and desire of the members of the congregation is to call others out of darkness and into the safety and confines of the church of Christ.

That this has been the traditional use of the term “church extension” in our churches is obvious from the fact that many of our evangelism committees in the past were called church extension committees. This is also evident from the various writings of men in the Standard Bearer in the past, and in past decisions of synod. For example, the Domestic Mission Committee was instruct­ed by the synod of 1964, in Article 137 (p. 34), “that as long as we have no missionary, the Mission Committee consider any request from local churches to assist them in church extension in their local areas by the supplying of pamphlets, radio broadcasting, and necessary financial aid in carrying out this work.” Although the name of these committees in our local churches has changed to Evangelism Committees, nevertheless the bulk of their labor is still in the area of church extension.

of Article 15 in their Church Order Commentary, define church extension as “the organization of new Churches” (p. 71, Third Edition, 1954). Again, this does not mean that mission work is numbers-orientat­ed. The church of Jesus Christ must faithfully follow the mandate of the Great Commission to preach the gospel to all peoples in order to save those who are lost in their sin. But the church does not do this without purpose or without a goal in mind. It is always the de­sire and prayer of this missionary and of those among whom he labors that God will so bless those labors to bring our mission work to fruition by the organization of a church. This is why mission work can also receive the designation church extension work.

The task of church reformation is defined for us in its very name: it is the work of re-forming a church that has become deformed by means of doctrinal impurity. Dr. Abraham Kuyper describes this particular work of the church in A Pamphlet on the Reformation of the Church.

Reformation of churches implies first of all that the churches of Christ have a certain form or shape or figure which are uniquely hers as church. It implies, secondly, that this form or shape or figure can become impure by deformation or deformity. And it implies, thirdly, the obligation to restore this deformed or misfashioned or mis­formed church by reformation or renewal to the original form and good shape and normal figure which flows forth from her essence and is determined by her character.

This action [to make known their position regarding common grace—WGB] by the combined consistories was occasioned by several different invitations from dif­ferent parts of the Christian Reformed Church to deliver lectures on the controversy that had led to the deposition of so many officebearers. Requests of this nature had been received from Iowa, Wisconsin and Illinois. The consistories decided to delegate Reverend H. Hoeksema in order that he might inform those that evinced interest in the cause about the things that had taken place relative to the origin of the Protesting churches….

The Lord has been with them.

Always He has pointed out to them new fields of labor through the means of requests that were received from various Christian Reformed communities to lecture and to preach for them (pp. 258, 259).

This work was truly church reformation—an attempt to reform the church that had become deformed. It is little wonder, then, that the 1942 constitution of the Mis­sion Committee would state: “we are convinced that our present duty lies primarily in the field of church extension and church reformation.”

It must be understood, however, that the labor of church reformation may not have as its object only one particular denomination. The Protestant Reformed Churches recognize this as well. In their domestic mission work, the call was answered to help churches or groups of people of various religious backgrounds. This was true in Jamaica, Northern Ireland, Loveland, and Spokane, to name a few.

Neither ought the church of Christ question the valid­ity of church reformation when attacked for carrying on mission work in this manner. This is a legitimate and important labor of the church in domestic missions. Prof. David Engelsma, in his pamphlet Evangelism and the Reformed Faith, makes such a defense.

Evangelism is not limited to work done with heathen, with those who make no profession of faith in Jesus the Savior. On the contrary, it includes the work of the Church with those who profess Christianity and belong to a church, but who are either ignorant of the truth of the gospel or have departed from it. To bring the gospel to such is not “sheep-stealing,” but sheep-gathering; it is not “fishing in troubled waters,” but is fishing for men.

Prof. Engelsma in that same pamphlet quotes the Presbyterian theologian John Murray in this regard. Murray also insists that evangelism is not limited to the unsaved or those who are without God and without hope in this world. The objects of the church’s evangelism must include those who have departed from the truth and embrace error. He writes: “The evangelism that the true church of Christ undertakes must therefore contemplate the bringing of the gospel in its full import and demands to those who, though believers, are nevertheless the victims of ignorance, unfaithfulness and compromising associations” (“The Message of Evangelism,” in Collected Writings of John Murray, vol. 1, p. 124). This, in the true sense of the word, is church reformation.

Historically the Protestant Reformed Churches have linked together church extension and church reforma­tion. This is evident in the constitution of the Domestic Mission Committee. Because we have done so, many in our churches have assumed that church extension or do­mestic mission work may be accomplished only by means of church reformation. Certainly this has been the way we have conducted our mission work, for the most part, in the past. Today, it is difficult for many to break outside this mold in order to expand their view of missions.

But we will need to address this subject in another article. 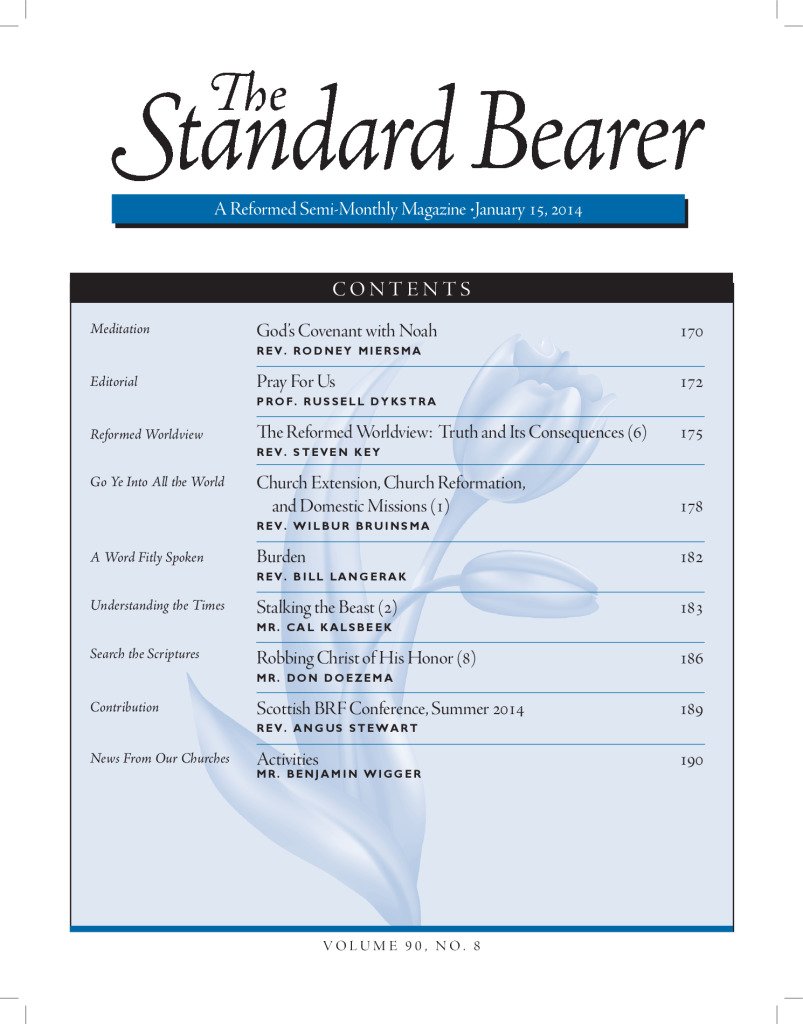