In his book, Tractaat van de Reformatie Der Kerken, Dr. A. Kuyper devotes a large section to the general subject of the deformation of the church. In this section, he discusses at some length the causes of such deformation. His remarks on this matter are so pertinent that they seem sometimes to have been written in our own time. Parts of this section follow below. We offer these quotes to the reader for two reasons. The first is that we may see more clearly how it is that churches go the way of apostasy and may understand the reasons for this. The second is that we may understand better the process of deformation in order to guard against it.

Kuyper talks about the fact that Satan himself is the cause of much deformation. After explaining this, he writes:

“This bitter enmity Satan has manifested in two different ways, viz., external persecution and internal poisoning. . . . (When Satan understands by hindsight that persecution) generally had the opposite effect (of destroying the church), and that a new sprout of the church of God shoots up from the blood of martyrs. . . , he moves the world to contract peace with the church, prompts magistrates to overload the church with treasure, favor and honor; and when the poor church, stunned by so much brilliance and glory, falls asleep in her triumph, then the evil enemy comes in the still of the night and drops his deadly poison in her veins, so that she, after not many days, feels her spiritual strength give away and must once more exchange her triumphal song for a bitter and sad complaint of deadly exhaustion and spiritual decline.

“Yet Satan cannot bring this fearful evil on the church of God in any other way than under the approval and control of Almighty God. If God had willed that His church on earth had celebrated her cross-triumph in quiet peace, this would have happened. But this is not His good pleasure. Like Job, God surrenders a church gathered from the wicked in the midst of a wicked world again and again into the hand of Satan. This partly because through spiritual struggle and triumph, the truth would glitter; and partly because the power of the Lord of lords is the glorious fruit of the preservation of a church always under fiery attack. God is not the Author or Worker of the evil which comes upon His church, but nevertheless, this is brought about according to His eternal and unshakeable purpose. The evil of suffering is necessary so that it may be manifest what is the power of the faith which God has put in His church. So also the evil of sin is present so that it may be manifest what is the power of the destruction from which He has delivered her. But however much we pay homage to the majesty of the counsel of the Lord without fear and with all resoluteness, so that God is esteemed not only for tolerating this raging of Satan in the church of Christ, but also for willing it, yet this does not take away from the children of God their deep, shocking. and irresponsible guilt. We surely confess from the heart that God’s inscrutable decree to permit the history of our race to go through sin and grace mitigates in no respect the damnable guilt of Adam. How much less can there be sought in that counsel of God an escape from guilt for God’s regenerated children who have tasted the power of the coming age, who know the love of Christ, and who are able to lift up the shield of faith; and yet who have not quenched the fiery darts of Satan, but who have, with unholy pleasure, received these darts into their own breast. And therefore we must not stay with the farthest cause of this deformation, but must also enter into the nearer causes which lie in the sin of each individual and in the sin of the church as a whole.”

After discussing individual sins in this connection, (a section which we omit), Kuyper turns to the corporate sins of the church as a whole.

“Besides the sins of individuals, there is a sin of the church as a whole. As members of the church, men do many things together. Men form together a sphere of life in which a certain atmosphere reigns. They breathe out a certain atmosphere of communal life. They form common ideas. The shape a moral judgment. They create a common opinion which becomes a certain power. And thus it is that there is both corporate responsibility and corporate guilt, which again works most perniciously on the few; and in doing this, it infects the whole of the body of Christ. At last even the holiest is affected, and sin in the church of God becomes general.

“This can go so far that finally also for the church of the New Testament the word comes: ‘If you spread out your hands, then I hide my face, and if you multiply prayers, then I do not hear. . . .’

“All deformation of the church of God is apt to begin with this, that faith loses its animation. The church hangs on Christ. Tendrils, half cut off from the vine, begin to languish and wither. At first, as the fruit of fearful struggles and oppressions, Christ obviously lives in His own, the thrill of His life is experienced, the warmth of His divine love radiates through them. There is enjoyment of His salvation; the manifestation of His power. The Holy Spirit works thus through the children of God to make sensitive, to adorn with spiritual adornment, and to make! the purchased of the Lord live close and tenderly with their God. But then comes, one scarcely knows by what cause, an unrecognized cooling. There is a leaving of the first love. It becomes less tender, less close, less inward; and presently the observer sees that the inner fellowship of the Holy Spirit; and by this the inner life of love with the Bridegroom, begins to depart from the heart of the bride. Really, already then the deformation of the church has happened, although it is not yet obvious. But this condition does not last long. Indeed, ‘If thou doest well, shalt thou not be accepted? and if thou doest not well, sin lieth at the door.’ And so the work of the Holy Spirit is scarcely ceased or the door opens and sin slips in. The ungodly heart is released from its holy bond and begins to howl again in its own devilish lust. This begins in the smallest way, with trifles; which indeed work through. So sin breaks out more strongly. And finally one finds in the church of God whole groups which find the mask of piety burdensome and openly commit fornication with the I world. In this stage by no means all the church is seized, by this poison. On the contrary, in her large majority, she is still zealous against it. But that zeal is already too little energetic and too inanimate to banish the evil. The evil is still judged, but no one dares to condemn it openly. The faculty of faith for punishing this moral operation with discipline is lacking. But this in turn makes sin and worldliness all the bolder. The situation is quickly turned around. Instead of being able to rise with moral strength against worldliness, the children of God themselves come under the pressure of the world. They are almost ashamed to maintain the old ways of life. They begin to excuse themselves instead of condemning the world. No longer does discipline proceed from them upon the sinners, but the sinners proceed to exercise discipline over God’s children by intimidation .and mockery. Thus the standard of external spiritual life declines and finally sinks away. And the end result is that the Lord, by His righteous judgment, punishing such faithlessness, gives His church over into the power of her adulterers, so that she shall again have to learn to recognize her guilt and discover the way of prayer.”

After comparing this “turning of the tide” with a set of balance scales, Kuyper goes on to say:

“The church then is appalled at what has happened, and evil proceeds to take on greater proportions, creeping also into the shepherds. In the church of Christ, one is always able to know the turning point. If the church as church knows, in spite of the evil which creeps in, how to hold high her holy character, then one still always finds the shepherds being examples to the flock. In their priestly urgency they plead for the deliverance of the flocks with the sound of the trumpet of penitence, admonishing conversion. But if that sound ceases, the circle of the shepherds itself becomes unsound, and worldliness creeps in among those who, as witnesses of God, ought to tight with and for the sheep. Then also the hour of spiritual decline has irrevocably struck—also for the church, and corruption begins to affect her organization. Thus corruption begins to alter the church in her public manifestation as church. She assumes, a corrupt form.

“The power of the lie creeps out of a congregation which has become sick and creeps into the shepherds. And then, as a third stage; it creeps out of the shepherds who have also become sick, into the doctrine and worship of the church, so that the church abandons her confession. and introduces into the Lord’s house a self-willed form of worship. In this way, heresy, getting to its feet, brings about a new devastation. Doubt comes in the place of faith. The things which were once fixed now are loosened. Everything pressures and prompts a union of the confession of the church and the confession of the world.

“This happens to the worship services. There is no longer any satisfaction with a simple, spiritual character for worship services, but members take flight into a sensuous way to radiate what is for the eye and ear alone; and in this way they grieve the Holy Spirit.

“In this way corruption runs its course. It begins with the loss of the first love. It proceeds to worldliness. This inclination towards the world creeps out of the flock and into the shepherds. Through these shepherds, it finds its way into the doctrine; from the doctrine, into the worship services, in order finally to lay hold on the whole system of the church’s ordinances and to alter the church so that she becomes an instrument of Satan lying in wait for the people of God, and, in this people, for God Himself.” pp. 91-96. 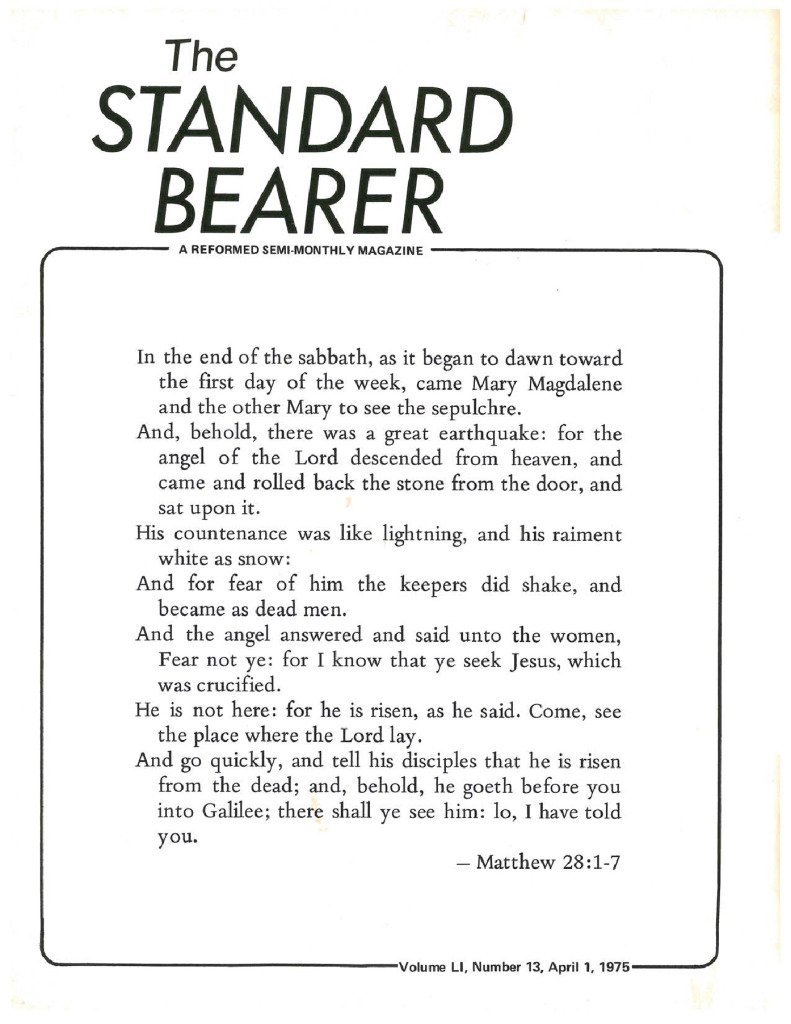