As, often as not, however, the attempt to make the gospel relevant has resulted in so altering the gospel and its contents that there is little or no resemblance any longer between the truth of the Scriptures and the relevant gospel which is brought to the people of our modern day. Relevance has become only an excuse to corrupt the gospel and introduce all kinds of heresy.

This was forcibly brought home to me once again when perusing a recent booklet distributed to the students at Grand Valley College in Allendale, Michigan. The pamphlet was intended, apparently, to make Christmas relevant to the students at that college. It is not the work of some fly-by-night evangelist; it is not a student publication—in which one can expect to find almost anything; it is not even an independent publication. It is a monthly publication of the Christian Reformed Board of Home Missions. It is therefore, an official publication.

We shall quote most of it, for it is not very long. What we omit are a few Scriptural quotations (from a modern translation) and two “evangelical cartoons.”

It begins with a page entitled “The ‘Live’ Manger Scene.”

Some of us kids portrayed another “live” manger scene this past week. Many people in cars came by to peek and see how cold the shepherds looked and how many were still holding out.

It’s always amazed me, Lord, that in the live manger scenes of today the only person not “real” in these scenes is You. You are usually portrayed by a Raggedy Ann, a Baby First Step, or a Tippy Tumbles doll.

But that’s really not true either, is it, Lord? Because You are alive in Cindy, who is playing Mary, and in Bob who is Joseph, and in Bruce, Doug, and Jane, who are decked out as the shepherds tonight. That’s where You come alive—not in the crib but in people!

You make it truly a “live” manger scene! Help me to see You “alive” in the middle of my life whether I’m at Bethlehem, Calvary or Chicago.

Now, forget for a moment the use of “You” and the questionable propriety of a creche. What does this opening paragraph really say when one attempts to understand its meaning? Although it says very little of any worth, and does not say that little in a very clear way, it does assert that Christ comes alive, not in a crib, but in people. Whether the authors intended this or not, certainly the very strong impression is left that “The Divinity” designated by “Lord” and by “You” is alive today only in people. It does not matter whether this vague and nebulous divinity came alive in Bethlehem; nor presumably, whether “He” became alive in any resurrection. The important thing is that He comes alive in people. Not only God’s people; just people. And what it means that he comes alive in people is not said. There are no modernists anywhere in the world who would not subscribe to that kind of language.

Impress by bigness, statistics and brute power, we tend to think God must be big—Real big: It takes Christmas to remind us that the bigness of God is not a matter of size. Look how quietly God entered human history, which is the best side of Christmas. The birth of Jesus is a fact of history; not a pious legend. You’d expect a big God to crash into the life of this disturbed planet with tough anger and force.

Jesus came to save, His humble means of entry is the best clue to His greatness. God enters His world in humble circumstances, lives life on the same terms as He expects all human beings to live it, accepts no special privileges, no protection, and in the end, is betrayed and executed. No tricks, no hookers to prevent it from happening at the last moment.

Christmas: the humble birth of the Man in whose flesh God chose to live, to die, to live again.

Here apparently there is some kind of an attempt made to bring into relevant terms the truth of the incarnation. But this is very vaguely and even heretically expressed. For one thing, this truth of the incarnation is especially expressed in the words: “in whose flesh God chose to live.” Not only is this almost an exact description of several ancient heresies related to Arianism which were condemned by the Church hundreds of years ago; but it is also crassest heresy. God did not choose to live in a man. The Word became flesh and dwelt among us. That is something quite different. A virgin conceived and bore a Son because the Holy Ghost came upon her and the power of the Highest overshadowed her. Therefore her child is the Son of God. The pamphlet’s expression too can surely be interpreted (and is most naturally interpreted) to mean that God dwells in this man in some way similar to the way He dwells in every man.

And that, I suppose, is why the whole point is made here that God came in a quiet way. He really did not, of course. When the apostle John speaks of the Word becoming flesh, He adds that “we beheld his glory, the glory as of the only begotten of the Father, full of grace and truth.” And the whole life of Christ was not quiet but world-shaking, for He came in judgment to destroy.

Two thousand years ago you’d have said that the life of a carpenter-turned-rabbi Jesus was insignificant. Yet, today there are millions who gladly serve and worship Him, and many who have demonstrated their willingness to die for His sake, The greatness of God, the greatness of Jesus, is quite different from the greatness which men usually notice: The greatness of a pure life humbly offered to give each person the opportunity to become a child of God.

A prayer is interspersed at this point:

Among the distant descendants

Of kings and shepherds

Before we send Christmas back

Because we can’t get it to work.

O God, what have we done

If we have to justify why

Why must we make such excuses as

We have always done it or

We do it for the children?

Send us searching through

Our attics and our trash

Lest in our blindness

We left our treasure there,

There was no advertisement, no press conference, no publicity. God just slipped in through back door Bethlehem. In fact, the entry of God into His own world was incredibly humble. There is little romantic or beautiful in the thought of a young woman having labor pains in an animal shelter inlaid with wall-to-wall straw. Sad commentary on a political power that would not give up a bed for a girl in labor—and that the Son of God must be born in a stable.

Yet the political power in which He was born utterly collapsed; all that remains—slag heaps. Yet the little baby, born in such pitiful humility and cut down in His prime, commands the allegiance of millions all over the world. You meet them in a ticket line, on a subway, over a sledding hill, during a coffee break at a rest stop, after a frigging, before a big decision.

He has become friend and companion. Jesus of Nazareth, this unique person, has become the ironing board for all the crumpled programs and aspirations of the ages. A most astonishing, phenomenon in human history. A solid rock of evidence.

The Christ described here is no different from the Christ of a thousand modernists. True, he is called “the Son of God”; but Arius called Him this; so did Servetus; so did hundreds who denied His divinity and who deny the blood of atonement. This is the Christ of a good example; a loving, caring Christ Who is but a leader among men, a pointer to a way of morality all should walk. He is the Christ of heresy, not the Christ of the Scriptures. There is no word of a Christ Who comes to take peace from the earth, Who comes as a refining fire, Who comes as God’s eternal Son with the burden of the guilt of the sins of His people upon Him. There is here no Christ Who is exalted in the highest heavens as Ruler of all, whose eyes are as a flame of fire and whose feet like to fine brass and whose voice is as the voice of many waters; Who has in his right hand seven stars and out of Whose mouth comes a sharp two-edged sword; and Whose countenance is as the sun shining in his strength.

Finally, the pamphlet is concluded with this:

Someone suggested that Christmas was necessary because “God had a lot of knowledge, but lacked experience.” Not a bad place to start thinking about the true meaning of Christmas. For although God knew the human condition, it was necessary to enter the planet in order to experience it. God was in Christ experiencing temptation, difficulty, ingratitude and disappointment. Intensely He felt the vibes of heartlessness, exploitation and stupidity. He hammered out undated maxim to last for the remainder of the planet’s life: words that have changed human life and history as no other words ever have.

Without flinching from His announced goal to save by loving, He confronted opposition and misunderstanding. He lunched with the arrogant and hypocritical. He spent mornings listening to prostitutes. He went on walks looking for the failing, the anxious ones; He waited in a line to help the hurt ones.

After all that and more, He experienced hell. And came back loving.

Proof that God is not some vast impersonal power, but is the God who, “because He wanted to,” experienced all those things for our sakes. Get the message? Open Christmas and discover a God who cares. Be sure of this. He cares.

But there is no Christ here Who comes into the hearts of His people with the irresistible power of His Spirit to create in them a new creature, freed from sin and guilt, holy and righteous, heir of heaven.

It is all so sad.

Supposing that one student would be “converted” by this pamphlet—something really impossible; what then? He would be converted to a Christ of man’s imagination, to a gospel upon which Paul pronounces in holy anger, his anathema.

But this is not the Christ God’s people have worshipped in adoration beginning with the shepherds and wisemen. He is not the kind of Christ before Whom we bow in awe and praise. Thank God it is not our Christ! 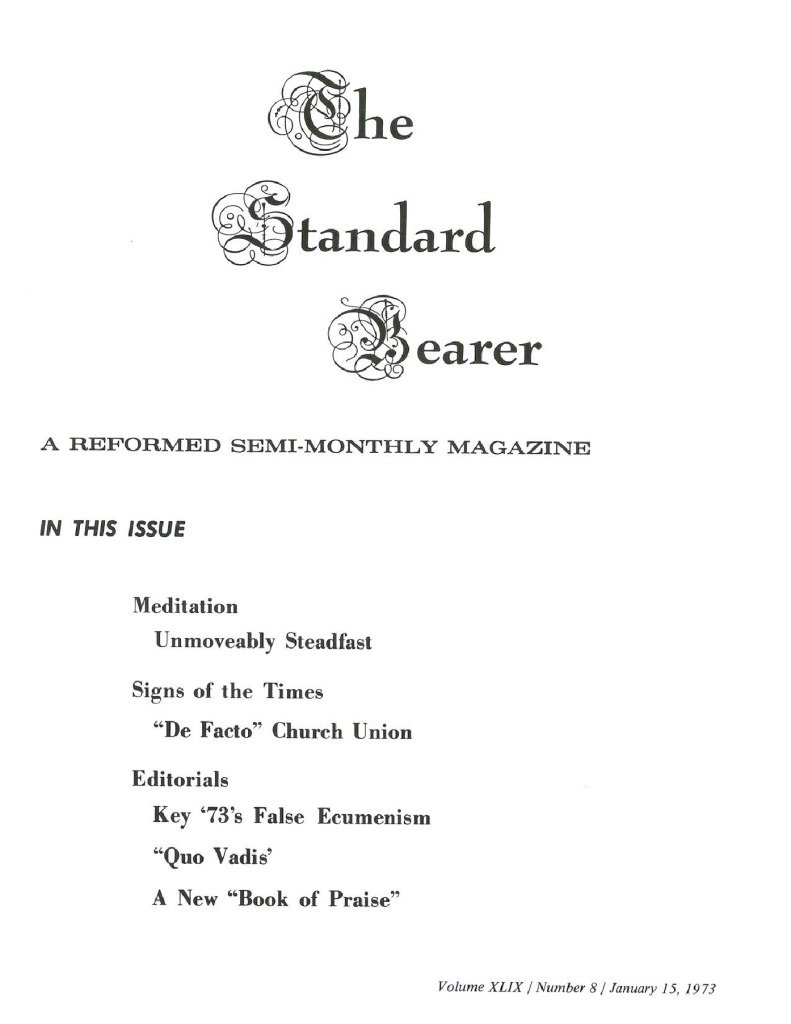