This subject takes us into an arena. This arena is not for spectator sports, rather for battle. It’s not the nicest place to be. It spells out many harsh words between young people and their parents. It has caused division among brothers and sisters in the household of faith. Why? Because in the exercise of Christian liberty one Christian says no, and sometimes another says yes; and there is supposed to be a place for both within the church. And that on moral judgments.

In Bible times it assumed the form of circumcision or non-circumcision, of meats offered to idols—to eat or not to eat. Today it assumes the form of dress codes, athletics, television, contemporary music, smoking, drinking, and what not. It always seems as if young people are on one side of the confrontation.

It is paradoxical that such a beautiful word has to be viewed against such a hostile background. Liberty! The word itself tingles with openness, with abandon. And so it should be, if viewed properly.

We are speaking of Christian liberty. This must be considered in contrast with the wild abandon of licentiousness which marks so much of the foolishness of modern youth. The drug cult, the sexual revolution, Woodstock and its byproducts, detail for us the worst form of bondage. Truly, man is born in sin and as such brings himself into greater expression of sin and death. Here is how God describes it, “For when ye were the servants of sin, ye were free from righteousness. What fruit had ye then in those things whereof ye are now ashamed? For the end of those things is death,” Rom. 6:20, 21. Do not confuse Christian liberty with licentiousness, lawlessness.

Rather, liberty for a Christian is to be conformed to the law of God and to rejoice in that law. Let’s listen to Scripture for a moment. “And I will walk at liberty: for I seek thy precepts,” Ps. 119:45. Here the Psalmist joins liberty and law. Further, “Jesus answered them, Verily I say unto you, whosoever committeth sin is the servant of sin. And the servant abideth not in the house for ever, but the Son abideth ever. If the Son therefore shall make you free, ye shall be free indeed,” John 8:34-36. Here we learn the added fact that liberty is in Christ, the Son of God; He must free us. That from which He frees us is pointed out in Rom. 8:2, “For the law of the Spirit of life in Christ Jesus hath made me free from the law of sin and death.” The content of the liberty is given to us in II Cor. 3:17, 18, “Now the Lord is that Spirit; and where the Spirit of the Lord is, there is liberty. But we all, with open face beholding as in a glass the glory of the Lord, are changed into the same image from glory to glory, even as by the Spirit of the Lord.” This then is the liberty of the Christian. We pass from a servant of sin unto one who acknowledges the glory of God.

THE SCOPE OF LIBERTY

So far there is no controversy.

Inevitably, we have to face the question how far does this liberty extend. To phrase it differently, in how far does the law of God bind the conscience of every child of God? What should be considered as dictated by the law of God (including all the moral teachings of the entire Scripture), and what should be included in liberty of conscience to be determined by each child of God? We must allow for both areas of Christian judgment.

On the one hand, we recognize that the Scriptures form moral judgments which must be obeyed. We usually consider them to be summarized in the ten commandments, as Christ did in Matt. 22:37-39. The Bible indicates that certain moral conduct is wrong and exhorts us to proper behavior. These must be upheld by every Christian, and within this area there is no room for equivocation. These include such things forbidden as drunkenness, fornication, murder, stealing, etc. We are exhorted to moral purity, to assist our neighbor, etc.

Besides this area, there is also indicated in the Scripture certain things which must be left to the individual judgment of the Christian. Each Christian must take the general principles of the Scriptures and apply them in some instances differently, As we cited before, the two most well known examples of Paul are with the circumcision of Timothy and the non-circumcision of Titus (Acts 16:3, Gal. 2:3). Also Paul explained the use of meats offered to idols, I Cor. 8. In both cases there was a yes and a no, and Paul determined what it should be in each instance on the basis of his Christian liberty. He was criticized for his decision, but he defended his action on the basis of his freedom to decide.

The double difficulty to which we made reference is this. If, on the one hand, we try to legislate ecclesiastically on certain issues which properly belong in the area of Christian liberty, we do wrong and go beyond the teaching of Scripture. To do this undoubtedly leads to Phariseeism: we would have a long list of dos and dont’s which if observed externally, would make a fine “Christian” but which Christ calls a white washed sepulchre. The church would then tempt the Christian by transferring his moral calling to judge moral issues to the church and freeing him from his duty as a Christian. The other difficulty is to extol Christian liberty to such an extent that everything falls under this category, and the doctrine of Christian liberty becomes an umbrella under which sin is condoned within the Christian community: church, home, school, and society.

Moreover, though it has already been occasionally adverted to, there was an advantage in deferring the fuller consideration of it (that is, Christian liberty) till now, for the moment any mention is made of Christian liberty lust begins to boil, or insane commotions arise, if a speedy restraint is not laid on those licentious spirits by whom the best things are perverted into the worst. For they either, under pretext of this liberty, shake off all obedience to God, and break out into unbridled licentiousness, or they feel indignant, thinking that all choice, order, and restraint are abolished. What can we do when thus encompassed with straits? Are we to bid adieu to Christian liberty, in order that we may cut off all opportunity for such perilous consequences? But, as we have said, if the subject be not understood, neither Christ, nor the truth of the Gospel, nor the inward peace of the soul is properly known. Our endeavors must rather be, while not suppressing this very necessary part of doctrine, to obviate the absurd objections to which it usually gives rise. (Institutes of the Christian Religion, Book III, chapter 19, page 131.)

It is not easy to define what comes under the heading of Christian liberty. In general, we have in mind those things not specifically condemned in the Bible nor commanded. Sometimes these are called “adiaphora” or “things indifferent.” It gets this designation because of the fact that you cannot go to the Bible and find direct proof whether they are right or wrong. We believe there are, however, Scriptural directives which help us in understanding how to handle things included in Christian liberty. We consider three of them.

First, strictly speaking, there is not such a thing as a thing indifferent, or that it doesn’t make any difference how we act. Simply because everything has moral value, it demands of us careful and responsible decisions. Before God, we must make the right decision in everything we do. We can use our Christian liberty for good or evil. Everything comprehended in this area will also enter into judgment, “But I say unto you that every idle word that men shall speak, they shall give account thereof in the day of judgment,” Matt. 12:36.

Secondly, our Christian liberty must be used to the glory of God. Not only must we not sin by things we do, but we must serve God! Listen, “For, brethren, ye have been called unto liberty; only use not liberty for an occasion to the flesh, but by love serve one another,”Gal. 5:13, 14. Peter warns, “As free, and not using your liberty for a cloak of maliciousness, but as servants of God,” I Peter 2:16. John Calvin correctly comments:

They say there are things indifferent: I admit it provided they are used indifferently, but when they are indulged in luxurious profusion, things which otherwise were in themselves lawful are certainly defiled by these vices. Paul makes an admirable distinction in regard to things indifferent: “Unto the pure all things are pure; but unto them that are defiled and unbelieving is nothing pure; but even their mind and conscience is defiled.”

Rather, we are to use our Christian liberty in serving God, “But now being made free from sin and become servants to God, ye have your fruits unto holiness and in the end everlasting life. Rom. 6:18.

In addition to the foregoing, we can add a third element, that our exercise of Christian liberty must also be for the good of our neighbor. Correctly Paul warns, “But take heed, lest by any means this liberty of yours becomes a stumbling block to them that are weak,” I Cor. 8:9. He adds later, “All things are lawful for me, but all things are not expedient, all things are lawful for me, but all things edify not,” I Cor. 10:23; We must ask ourselves whether our conduct may offend our weaker brother. The idea of offend is not “to make him feel bad or react unfavorably to our conduct”; rather, “to cause him to stumble and fall into sin.” This touches upon an important area of our Christian liberty. We may not simply say, “It is all right for me; I don’t see anything wrong in what I do.” We have to ask also, “Will my doing this give occasion for my brother to sin? Will I be a bad example, or give excuse for evil?” More positively, we may also add, our conduct must always be a good example and serve as a living testimony of the power of the living Christ. All things must edify, build up spiritually. This idea moves Paul to say in the Holy Spirit, “For though I be free from all men, yet have I made myself servant of all that I might gain the more,”I Cor. 9:19. Sometimes it is the Christian duty to go the “extra mile” to avoid offense and render spiritual direction by avoiding something that may seem “indifferent” and replacing it with something wholesome and worthwhile.

We suggest that if we are going to come to honest understanding in the area of Christian liberty, we have to deal with all three of these elements. The way we dress, our use of television, drinking, smoking, sports, have to be viewed in light of these things. It makes a difference before God as to our motive, do we do these things not out of empty pleasure (license), but truly as servants of God, and that by their use we are not causing our neighbor to sin, but are helping him be a better Christian. Surely there is an area of liberty, but that area must pass the scrutiny of the Word of God.

In our next article we will consider, D.V., why this seems to be such a crucial area in the life of young people. 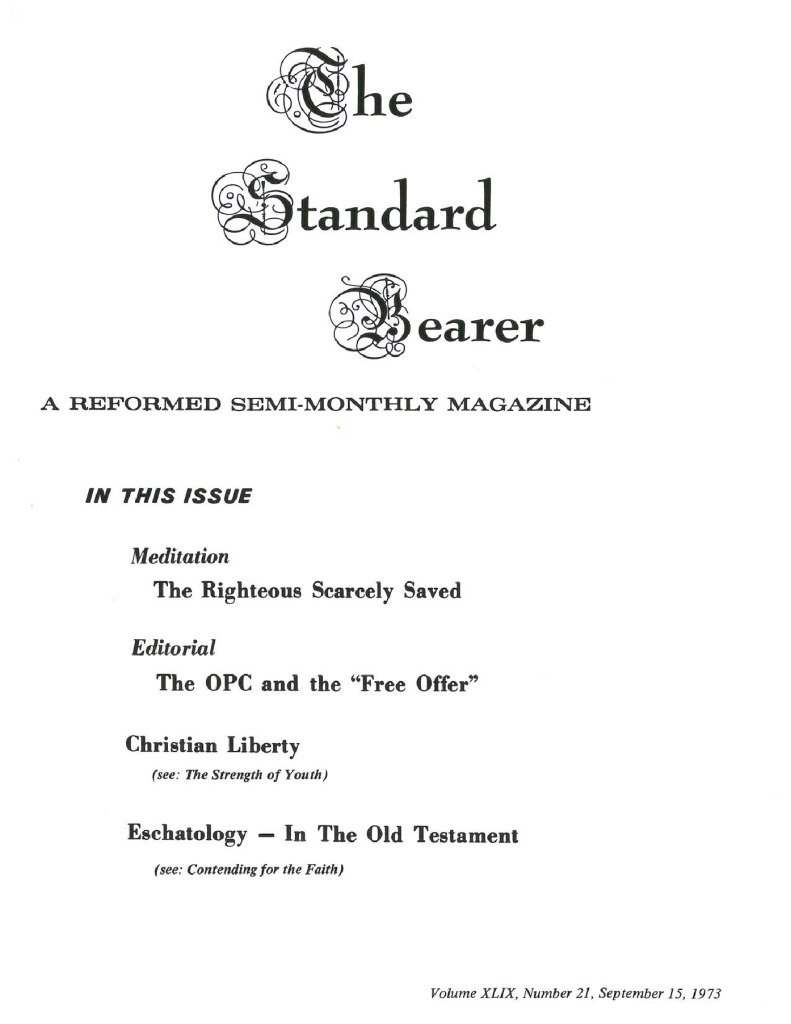