“We believe that Jesus Christ, according to his divine nature, is the only begotten Son of God, begotten from eternity, not made nor created (for then he should be a creature), but co-essential and co-eternal with the Father, the express image of his person, and the brightness of his glory, equal unto him in all things. He is the Son of God, not only from the time that he assumed our nature, but from all eternity, as these testimonies, when compared together, teach us. Moses saith, that God created the world; and John saith, that all things were made by that Word, which he calleth God. And the Apostle saith, that God made the worlds by his Son; likewise, that God created all things by Jesus Christ. Therefore it must needs follow, that he, who is called God, the Word, the Son, and Jesus Christ, did exist at that time, when all things were created by him. Therefore the prophet Micah saith, His goings forth have been from everlasting. And the apostle: He hath neither beginning of days, nor end of life. He therefore is that true, eternal, and almighty God, whom we invoke, worship, and serve.”

The Reformed believer delights in confessing with the inspired apostle: “By grace are ye saved through faith; and that not of yourselves: it is the gift of God: Not of works, lest any man should boast.” (Ephesians 2:8, 9) This is the heart of the Gospel. Salvation is always and only of God and never of man. And this is exactly the issue at stake in this tenth article of the Belgic Confession. At first glance the article may not seem to be too important or significant as far as the truth of Scripture is concerned. It appears little more than a detailed restatement of the truth concerning Christ presented in Article VIII. Besides, no one, at least not in Reformed circles, denies that Jesus Christ is the only begotten, eternal Son of God. But just a bit of reflection on this truth enables one to understand its key significance for the whole of the doctrine of the Word of God. To deny this truth is to deny the incarnation of the Son of God; to deny the incarnation is to deny the atonement; to deny the atonement is to deny the resurrection; to deny the resurrection is to deny the whole work of salvation; and then we are of all men most miserable, for we are yet in our sins. The entire doctrine of vicarious atonement rests on this truth: for if a mere man (no matter how good a man) died on the cross, the blood of Christ has no cleansing power, no power to atone for our sins. And no mere man could actually deliver us from the lordship of sin and death. But no mere man died on the cross; Christ, the eternal and only begotten Son of God in our flesh died and was raised again and lives in glory at the Father’s right hand. Salvation is of God. This is all our comfort.

We do well, then, to consider this truth in connection with this tenth article of our creed. This must ever be at the very core of what we all “believe in our hearts and confess with our mouths.” Christ is true and coeternal God.

This truth was under attack early in the history of the New Testament Church. These “Christological Controversies” were in close relationship with the Trinitarian controversies we noted earlier in connection with Articles VIII and IX. The two most significant of these were the Arian and Semi-Arian controversies. Briefly, (the reader interested in further study of these may consult Prof. H. Hanko’s Ancient Church History or the late Rev. H. Hoeksema’s History of Dogma, both of which are mimeographed syllabi published by and available from the Theological School of the Protestant Reformed Churches) Arianism arose in the early history of the Church. Arius, its father, taught that although Jesus Christ was the greatest and best of all men, He was man and man alone, of different essence than the Father. He simply denied the divinity of Christ. This controversy was raging for many years and there were times when it was doubtful that the orthodox faith could triumph. The error was condemned by the Council of Nicaea in 325 and again by the Council of Constantinople in 381. As the name would indicate the Semi-Arians taught a similar heresy. Although these condemned the Arian position, they also maintained that Christ was not of the same essence as the Father, but of like essence. The orthodox position was defended staunchly by the great Athanasius who even suffered for the sake of the truth. Athanasius succeeded in convincing the Council of Constantinople (A.D. 381) to condemn also this position. Much later in Reformation times a heresy which differed very little from the old Arianism and which was known as Socianism arose. It was uniformly condemned by the Reformers. Although it be in different garb there is still the denial of the deity of Christ. In our times it is the “modernism” of the liberal churches which teaches that Christ is not really God, of the same essence as the Father. Jesus according to this view is only a man, a very good man, a supreme example for us to follow; but only a man and not God. The atonement is denied as well as the victory of the resurrection. Character building and education become the theme of the “gospel” preached by these churches.

Over against all such departures the Reformed believer confesses that Jesus Christ is true and eternal God. Christ is, this means, according to His divine nature, not made nor created. He is the only begotten of the Father; and that, too, from all eternity. Thus Christ is not a creature, nor is He begotten in time. Still more, Jesus is co-essential and co-eternal with the Father. He has not a similar essence but the same essence as the Father. And as the Father is eternal, so Christ is eternal. Furthermore: “He is the Son of God, not only from the time that he assumed our nature, but from all eternity.” In other words, His Sonship did not begin at the moment of His incarnation, but from all eternity He is the Son of God. For this reason, He is the express image of the Father’s Person, and the brightness of His glory (Heb. 1:1ff.), equal with the Father in all things.

This truth, so essential to the whole of Christian doctrine, is clearly taught all through the Scriptures. Article 10 cites but a few of the many texts and passages which prove that Christ is true and eternal God. The Biblical proof for the divinity of Christ is often summed in Reformed Dogmatics under four heads: The Bible assigns divine names to Jesus, the Bible ascribes divine attributes to Christ, divine works are also ascribed to Christ by Scripture, and Christ according to the Word of God receives divine honors.

We find, therefore, divine names given to Christ. The most obvious of these is the name, Son of God, which occurs more frequently than we could number in the Bible. Christ is also called the Mighty God; and even, the Everlasting Father. In the Gospel according to John we find Jesus called the Word or Logos. This Word was “with God” and “was God,” “in Him was life,” and His glory is that “of the only begotten of the Father, full of grace and truth.” (John 1:1, 4, 14) This eternal Word “was made flesh, and dwelt among us.” (verse 14) Concerning this passage Dr. P.Y. DeJong remarks: “Only by denying the authenticity and authority of John’s gospel can the impact of this name which teaches our Lord’s deity be circumvented.” (The Church’s Witness To The World, p. 200)

Concerning the divine attributes ascribed by Scripture to Christ the Confession emphasizes His eternity. Because the Bible teaches that the Son made the world, “therefore, it must needs follow, that he, who is called God, the Word, the Son, and Jesus Christ, did exist at that time, when all things were created by him.” Our Creed then continues by citing the passage from Micah and the one from Hebrews 7:3. In Micah 5:2 we read of Christ as the one Who shall come forth out of Bethlehem and Who shall be “ruler in Israel; whose goings forth have been from of old, from everlasting.” The passage in Hebrews 7 speaks of Christ’s eternal priesthood after the order of Melchisedec. Other divine attributes than His eternity are also implied in these passages, especially. His almighty power and His wisdom.

When speaking of the divine works ascribed by Scripture to Christ, the Creed emphasizes the work of creation. Genesis 1:1 teaches that in the beginning God created the heavens and the earth. John 1:1 teaches that God created in the beginning all things by the Word which became flesh and dwelt among us. Col. 1:15ff. teaches the same when it states that by Jesus Christ were all things made. And, Hebrews 1:2 teaches that God made the worlds by His Son. In addition we find other divine attributes ascribed to Jesus. He forgives sins (Luke 7:48, 49) and He quickens the dead (John 5:20, 21). But these and others are treated in succeeding articles and need not be emphasized at this point.

The final evidence for the divinity of the Savior we find in the divine honors He is given. The Bible teaches that God has committed all judgment unto the Son: “that all may honour the Son even as they honour the Father. He that honoureth not the Son honoureth not the Father that sent him.” (John 5:21) No distinction is made in this passage between the honour which must be paid to the Father and that which must be given to the Son. The Bible teaches us that God delights in having His creatures worship the Son for: “. . . when he again bringeth in the firstborn into the world he saith, And let all the angels of God worship him.” (Heb. 1:7) Christ Himself accepted that same worship from Thomas who when he saw his risen Savior said: “My Lord and my God.” (John 20:28) In addition to the above, Scripture also teaches that we are to be baptized in the name of Christ. (Acts 19:5) And Christ Himself declares that He is of one and the same essence with God the Father when He said: “I and my Father are one.” (John 10:30). This truth affords great comfort to the sheep for whom the Good Shepherd laid down His life: for the fact that He and the Father are of one essence means no one can pluck the sheep out of the hand of Christ. They cannot go lost!

This Christ; true and eternal God, is our Lord and Savior! He it is by Whom the worlds were created. He is the Christ Who was born of the virgin, having been conceived by the Holy Spirit. He is the one Who as our merciful high priest was touched with all the feelings of our infirmities and was tempted in all points like as we, yet without sin. He is the Christ Who offered His blood as atonement for our sins and Who was raised again on account of our justification. It is this Christ Who, having ascended to the right hand of His heavenly Father, returned to live with us by His Spirit. For this Christ’s return in power and glory at the end of the ages we look and fervently pray! Because He is true and eternal God we are saved and shall never go lost. On the basis of the clear testimony of the Word of God we conclude with our Confession: “He, therefore, is that true, eternal, and almighty God, whom we invoke, worship, and serve.” 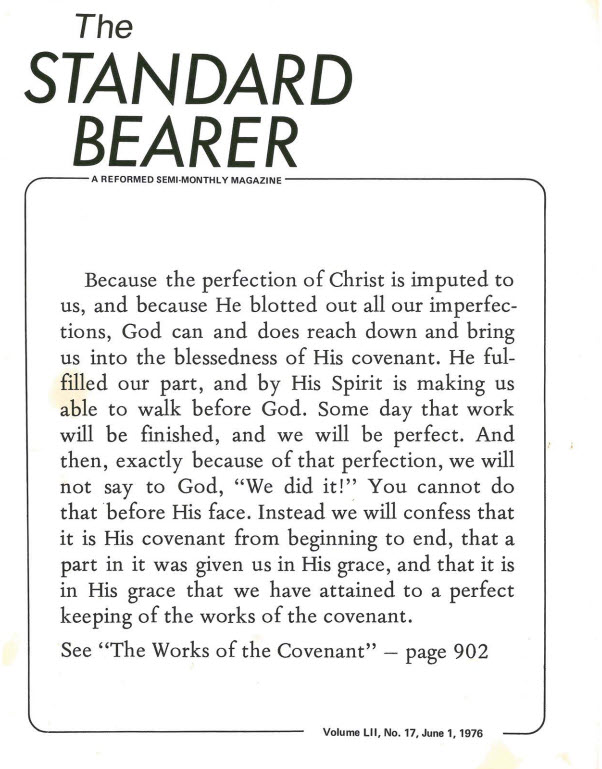