Rev. Moore is pastor of the Protestant Reformed Church of Hull, Iowa.

In this meditation we have an occasion for great rejoicing and gladness as the elect church of Christ dwelling in the midst of a sin cursed world. We would consider the simple declaration of the Scripture as it is set forth in Mark 16:6, where we read, “And he saith unto them, Be not affrighted: Ye seek Jesus of Nazareth, which was crucified: he is risen; he is not here: behold the place where they laid him.” The instruction of the passage is one that we have heard many times in the past; but for God’s children this testimony never does grow old. This is especially true because it speaks to us the word of salvation and is the central theme around which all of the Scripture is set.

The morning of Resurrection Day

The women approached the grave of Jesus early in the morning on Resurrection Sunday intending to anoint the body of Christ properly. It was with sorrow in their hearts that they approached the tomb, for they were separated from their Master by His death. And, yet, they came to His tomb to finish the work of love. They would properly anoint His body for His burial, which they were not able to accomplish before the Sabbath Day. Even as they approached the tomb they had questions as to how they would remove the stone that closed the mouth of the tomb. But they continued on toward the tomb in the faith that somehow they would be able to carry out their task.

In the women that came to the grave that morning we have a picture of the church of the ages, of God’s people who, walking in submission to God and filled with love for their Lord, find blessing in His service. Even in His death they would still serve Him by this work of love. However, as is always true of members of Christ’s body when traveling down life’s pathway, the women still struggled, in their service, with sin of the flesh. This became apparent as they came close to the tomb and became afraid. We read in Mark 16:5, “And entering into the sepulchre, they saw a young man sitting on the right side, clothed in a long white garment; and they were affrighted.” They were afraid when they saw the angel of the Lord at the sepulcher—not because Jesus body was not there, but because they came into the presence of the holiness of God reflected in the angel.

We ought to have, and by the grace of God we will have, this same trembling before God’s holiness when we come into the house of God, as we stand before His Word as it is proclaimed from Lord’s Day to Lord’s Day. How could it be otherwise as we still dwell in this flesh? As we dwell in this earth, this must needs be our reaction because, simply stated, we are sinners. And, as sinners entering the presence of God, we are conscious that we are worthy only of judgment, as were also these women. Certainly, against the holiness of the angel, who was come from the presence of God, sin stands out in stark contrast. It was sin that had brought Jesus to the cross and to the grave! Our sin!

But the cross and the grave are not the end. Into the holy presence of God we may come, for Christ isrisen! Risen indeed!

This is the glorious message that the angel had for the women as they came to the grave, and for us as we hear the testimony of our text. As we consider the wonder of this truth and its true significance for the women and for us, we would first take note of the fact that we have here the record of the Scripture that Jesus in fact has risen from the grave. The presence of the women at the grave serves to verify the fact that Jesus arose. It was providentially brought to pass that the church might have the eye-witness account that Jesus was raised from the grave. There is in fact an overwhelming testimony that Jesus has risen bodily. It is a testimony that begins with the women coming to the grave, where it is declared by the angel waiting there, “He is not here, but risen.” The grave itself, with the burial clothes and their position, gave testimony that Jesus had risen. And there were many appearances of Christ to the church of the day, that made this clear, Surely He arose.

Jesus’ human soul is united with a body glorified and raised from the grave. We are given a glimpse of what our own resurrection will be like, for the body Jesus received is altogether different from the body He had while He lived with us in our flesh (as we learn from Jesus’ conversation with Mary Magdalene Touch Me not). Yet the body is the same, from the point of view that He received His own body glorified, as is evident from the fact that the apostles could and did recognize that this was their Lord that they were able to see. And now, as the women came to the tomb, the angel brings the message that He is not here, but risen; and thus God gives testimony to the wonder of the resurrection. The grave could not hold Christ. Death could have no victory.

In Jesus Christ is fulfilled the Scripture recorded in Isaiah 53:7: “He was oppressed, and he was afflicted, yet he opened not his mouth: he is brought as a lamb to the slaughter, and as a sheep before her shearers is dumb, so he openeth not his mouth.” He had been mocked, rebuked, judged, and crucified without justification. He bore our griefs and was bruised for our iniquities; but now in His resurrection we have the public declaration of God that speaks of His innocence and of His righteousness. It is the word of God saying unto His Son, “Well done, my good and faithful Servant.” Jesus is publicly justified and exalted, and this exactly as the representative of those given Him of the Father.

The blessed testimony at the tomb that morning is that there is salvation for those chosen in Christ. This is expressed in the prophecy from Isaiah 53, which is fulfilled by Jesus’ death and resurrection. We quote:

Yet it pleased the Lord to bruise him; he hath put him to grief: when thou shalt make his soul an offering for sin, he shall see his seed, he shall prolong his days, and the pleasure of the Lord shall prosper in his hand. He shall see of the travail of his soul, and shall be satisfied: by his knowledge shall my righteous servant justify many; for he shall bear their iniquities. Therefore will I divide him a portion with the great, and he shall divide the spoil with the strong; because he hath poured out his soul unto death: and he was numbered with the transgressors; and he bare the sin of many, and made intercession for the transgressors.

In perfect obedience and righteousness Christ bore the sin of those given Him, and He receives a portion with the great, being exalted to the throne of God. We see in Colossians 1:15-19 that this was determined in God’s eternal counsel, and that all of creation served this sacrifice of Jesus for the church, which is the body of Christ, who is the beginning, the firstborn from the dead, that in all things Christ might have the preeminence unto the glory of God. This means that the resurrection of our Lord is set in the eternal counsel of the living God, and that Jesus on the cross accomplished that eternal will of the Father perfectly. Therefore we are given to understand that the God of our salvation knew each of His children by name, and had chosen them in His Son to be saved from their sin exactly through this means of the cross and Jesus’ resurrection. All the works of God were subservient to this end—they were to serve the glory of God through the salvation of His people in the perfect obedience of the Son through the death of the cross. For Jesus was determined before the foundation of the world to be the firstborn of many brethren, and this exactly by removing our guilt by the atonement and by His being raised as the firstborn from the dead.

The resurrection is central in the proclamation of the gospel. The true church is content and blessed in preaching the Christ crucified and raised. This is the testimony that we need to hear, for no matter where Gods children turn, there is in this life a continual testimony that opposes them. There is a testimony that we are guilty of sin and transgression against the living God. We know that the wages of sin is death; and as by grace we see this, it dwells in our consciousness every day.

Further, in our very soul is the abiding conviction that the condemnation of our sin cannot be escaped in any other way than through the death and resurrection of our Lord and Savior. Only when we receive the testimony of the resurrection can there be any hope. But, like the women at the grave, we too need not be afraid, for Christ is not in the grave, but is risen! Risen in victory, in righteousness, not only for Himself, but also for us! Therefore this became the heart of the preaching, from the very first sermon that Peter preached after Pentecost. The preaching of the cross and resurrection was central to the preaching of the apostles, and it continues to be the true gospel proclaimed in the church today.

By the resurrection God declares that Jesus is He “who was delivered for our offenses, and was raised again for our justification” (Rom. 4:25). As the Spirit of Christ applies this word to our hearts, and we see Jesus’ broken body and shed blood and His resurrection, we know that all is well and that there is peace. Our conscience is delivered from all that which would trouble our souls. For indeed now are we partakers of Christ’s resurrection!

On the basis of His satisfaction by blood, the Spirit is poured out and we are made dead to sin, so that no longer do we live therein. It is in this strength of faith that we are able to and do stand in the presence of God, seeking all things of Him. For by the Spirit of Christ we are made partakers of Christ’s resurrection life. Paul teaches us in Romans 6:4-5: “Therefore we are buried with him by baptism into death: that like as Christ was raised up from the dead by the glory of the Father, even so we also should walk in newness of life. For if we have been planted together in the likeness of his death, we shall be also in the likeness of his resurrection:” We have therefore the assurance that all things shall work together for our good. We may go forth on this pilgrims’ pathway knowing that God shall surely bring to pass His counsel. We shall with Christ be glorified, as Paul promises in Romans 8:29-30: “For whom he did foreknow, he also did predestinate to be conformed to the image of his Son, that he might be the firstborn among many brethren. Moreover whom he did predestinate, them he also called: and whom he called, them he also justified: and whom he justified, them he also glorified.” 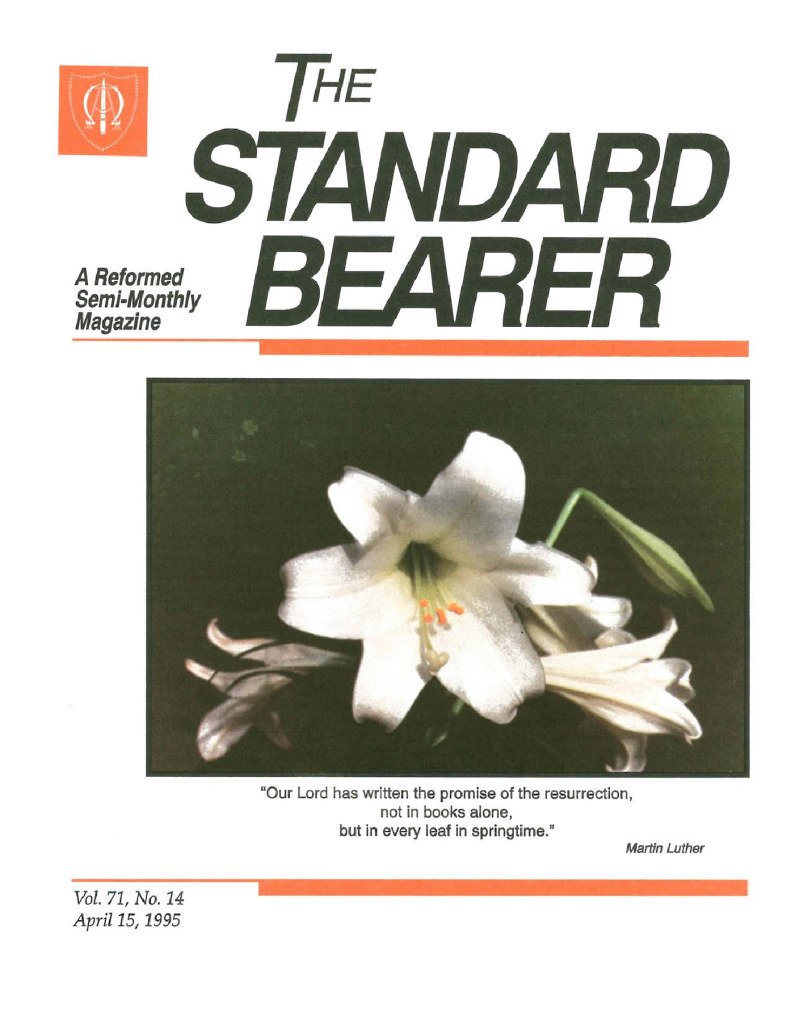