“I will build my church.”

I believe a church.

Since I believe in God, I also believe a church.

I do not believe in a church, but I believe a church. There is an obvious difference. I do not put my trust in the church as the source and fountain of my salvation, because I believe in God, the complete Author and Finisher of my faith. In Him alone I trust. Yet since I believe in God implicitly, I also believe that there is and always will be an organism known as the church.

The very fact that I believe a church, rather than accept this as mere fact, already places the church in a category beyond the earthly and the tangible. Anything that I can perceive with my senses is not an object of faith. But eye hath not seen, ear hath not heard, and it exceeds the fondest imagination of mere man, what God hath prepared for those who fear Him.

I believe a church because God has revealed that to me in His holy Word. He has sealed the testimony of His Word to my heart by His Holy Spirit, Who also assures me, that “I am and forever shall remain a living member thereof.” The marvelous power of faith assures me, not merely that God is God, but that this God is my God. By that same conviction I am convinced that God has His church in this world, of which He makes me a living member, now and forever.

That church is, according to the Scriptures, the Body of Christ, the assembly of the elect believers and their spiritual seed.

“Glorious things of thee are spoken, City blessed of God, the Lord.”

Let it be said with all fear and reverence: the church isholy.

The church is holy because she belongs so intimately to God Himself. He forms her, creates her. He even redeems her unto Himself by His own precious blood. He gives her to His Son, Who is the Servant par excellence in God’s House, our Lord Jesus Christ, in Whom God pays the purchase price for His church unto all eternity. Nothing could be more fully, more intimately God’s than His church. We have the testimony of God Himself for that, “But now thus saith the Lord that created thee, O Jacob, and that formed thee, O Israel, Fear not: for I have redeemed thee, I have called thee by thy name; thou art mine!” No earthly shepherd with a cherished flock as his sole possession could be more possessive of his prized treasure than the Lord Himself. He says: “All that the Father giveth Me shall come to Me, and him that cometh to Me I will in no wise cast out.” (John 6:37).

The church is holy because she is sanctified in Christ. She has the forgiveness of sins and the cleansing power of the Spirit through the atoning death of Jesus Christ. The church receives the personal assurance that though her sins are as scarlet, Christ’s blood washes her whiter than snow. Believers are calledsaints. They are saints, not in themselves, not in outward appearance, not according to their old nature of sin, but they are saints as new creatures in Christ, saved by His grace. God sees us in Christ, sees the righteousness of Christ in us, as if we never had had any sin. God makes us new creatures, restored in the image of Christ, with the life of Christ within us. We have the beginning of eternal life in our hearts even now.

The church is holy because God is in the midst of her. Paul compares the church to a holy temple a dwelling place of God. “Now therefore ye are no more strangers and foreigners, but fellow citizens with the saints, and of the household of God, and are built upon the foundation of the apostles and prophets (the Holy Scriptures) Jesus Christ himself being the chief cornerstone; in whom all the building fitly framed together groweth unto an holy temple in the Lord: in whom ye also are builded together for a habitation of God through the Spirit.” (Eph. 2:19-22) And what applies to the temple in her entirety also applies to the individual. Paul expresses surprise that members of the church could so readily fall into the sin of fornication. He severely rebukes them by saying, “What? know ye not that your body is the temple of the Holy Ghost which is in you, which ye have of God, and ye are not your own? For ye are bought with a price: therefore glorify God in your body and in your spirit, which are Gods.” (I Cor. 6:19, 20).

Therefore it must follow that the church is holily devoted to God. Jehovah says of her, “This people have I formed for myself: they shall shew forth my praise,” (Isaiah 43:21). Every individual member of that church has his own personal calling to be holy, as God is holy. He knows himself to be friend-servant of the living God. “But ye are a chosen generation, a royal priesthood, an holy nation, a peculiar people; that ye should shew forth the praises of him who hath called you out of darkness into his marvelous light.” Already in the dispensation of shadows we were taught to sing:

He has chosen thee, most precious, He delights in thee to dwell:

God’s own city, who can all thy glory tell?”

This holy church is also universal.

We do, not make it our ambition to attain this universality. We do not hope that this may be realized. We believe a holy, universal church.

If in any sense of the word the gathering of God’s church depended upon man, we could never be certain that it would ever attain its fulness. In fact, we could be sure that man must fail. But praise be God’s holy Name! God gathers His church. He has entrusted this work to His Son Jesus Christ, Who assures us:

“I will build my church.” “I will build my church,” implies that Christ has always before His consciousness the church as a temple in all its fulness. At all times He sees and knows that church according to the eternal blue prints drawn up by our heavenly Architect. God determines the length, the breadth, the height of that temple. He chooses each stone as a precious jewel in its own particular place. Jesus loves that temple so much that He was willing to come into our flesh as the Man of Sorrows, the suffering Servant of God, to redeem unto God that church as she is chosen unto life eternal. Through His suffering and death He fulfilled the Scriptures, “The stone which the builders rejected is become the head stone of the corner. This is the Lord’s doing; it is marvelous in our eyes.” (Psalm 118:22, 23) Even before He ascended to heaven Jesus gave us the assurance: “Other sheep I have, which are not of this fold: them also I must bring, and they shall hear my voice: and there shall be one fold, and one shepherd.” (John 10:16)

What a significant statement that is! Jesus speaks of other sheep besides those which are already gathered within the fold. He sees the entire church of the old dispensation as one flock of sheep already gathered. Before His mind’s eye He sees the church gathered in the line of the generations of believers from Adam to Noah, to Abraham, Isaac and Jacob, to Judah and David, even to Mary, the mother of our Lord. The true, spiritual seed of Abraham had been brought to the faith, and had died in that faith, not having received the promises, but having seen them afar off, even unto the generation that could fix its eyes upon the promised Seed, the Christ. Not one of Christ’s sheep, given to Him of the Father, had perished.

Now He adds, “Other sheep I have.” Not: I will have. Much less: I hope to have, if these sheep are but willing to heed My call. God forbid. Other sheep I have already, given to Me of the Father to be redeemed unto God by My blood. “For whom He (the Father) did foreknow, He also did predestinate to be conformed to the image of his Son, that he might be the firstborn among many brethren. Moreover, whom he did predestinate, them he also called: and whom he called, them he also justified, and whom he justified, them he also glorified.” Before God we are not only foreknown and predestinated unto eternal life, but we are also called, justified, glorified!

“Them also I must bring.” It is the voice of Jesus calling, “Come unto Me, all ye that labor and are heavy laden, and I will give you rest.” No one can resist that call, for the Lord knows His own and draws them by His Spirit in their hearts. Therefore Acts 2:47 informs us, “And the Lord added to the church daily such as should be saved.” And again in Acts 13:48 we are told that the word of God through the apostle Paul was so powerful in Antioch of Pisidia that “as many as were ordained to eternal life believed.” Just as Acts 16:14points out that the Lord Himself opened the heart of Lydia to believe.

One flock, one Shepherd. John on Patmos sees that wonder fulfilled. “And I John saw the holy city, new Jerusalem, coming down from God out of heaven, prepared as a bride adorned for her husband. And I heard a great voice out of heaven saying, Behold, the tabernacle of God is with men, and he will dwell with them, and they shall be his people, and God himself shall be with them, and be their God.” (Rev. 21:2, 3).

This is the universal church, gathered from the beginning to the end of the world, each stone carefully shaped and polished through the power of the Word for its own unique place in God’s temple, to the praise of the glory of His grace forever!

Today that church has fallen upon evil times. One is inclined to take up the bitter lament of the days of old,

“In Thy heritage the heathen, now, O God, triumphant stand;

They defile Thy holy temple, they destroy Thy chosen land;

Ruthless they have slain Thy servants,

They have caused Thy saints to mourn,

In the sight of all about us we endure reproach and scorn.”

The church, in the estimation of many, has been reduced to a “grace market,” where Christ and all His benefits are offered for sale to whoever may want Him. Others regard the church as a social center, where the banquet hall, the gymnasium, the swimming pool, and the counsel chamber have all but replaced the pulpit. The minister is surrounded with all sorts of assistants, a music director, a youth director, a psychologist, etc. The preaching has been degraded to a dissertation on the political affairs or social needs of a troubled world. The attention is focused on man, that to man may be the glory, the praise, and the dominion as long as this world can last. The people’s church has replaced God’s church, so that God’s church has the appearance of a hut in a vineyard and of a besieged city.

Yet the same One Who builds His church assures us: “The gates of hell will never overwhelm her.”

He calls us to put on the whole armor of God, in order to tight the battle of faith even to the end. He requires that we be faithful, as a Bride to her Husband, faithful even unto death. Even as He calls He is braiding for us the victor’s crown in the heavens.

I believe a church. And of this church I am and forever shall remain a living member. 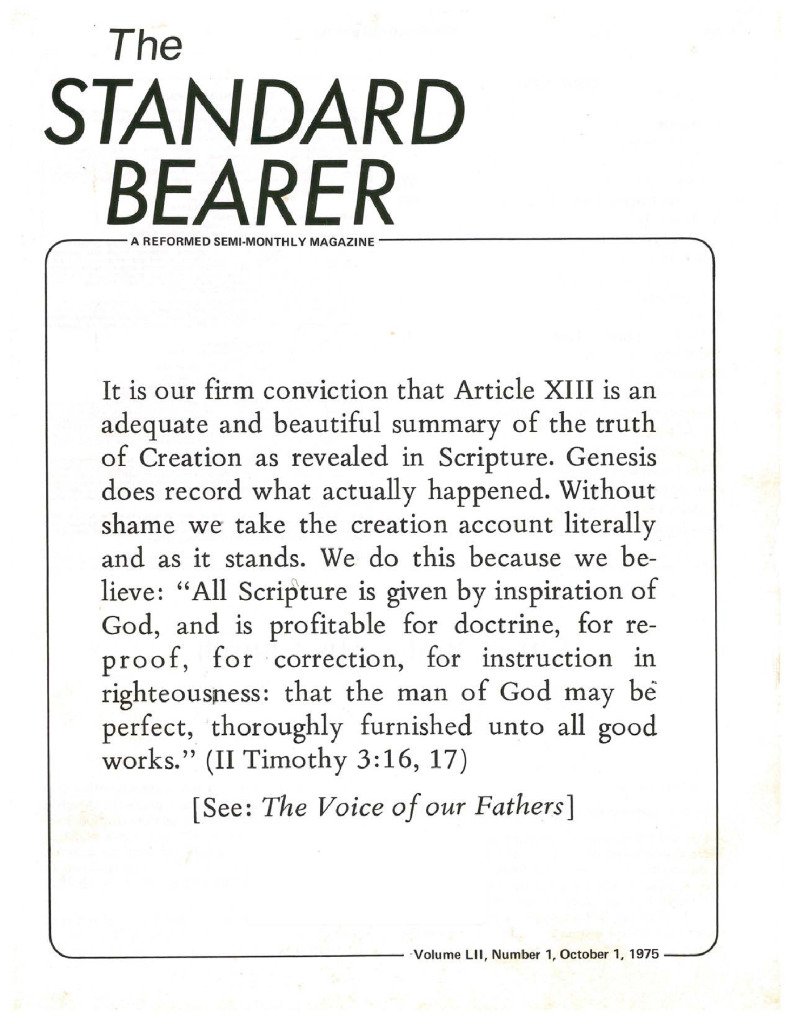