Prof. Hanko is professor emeritus of Church History and New Testament in the Protestant Reformed Seminary. Previous article in this series: March 15, 2006, p. 282.

Charles Finney’s work can be criticized for many reasons. He was thoroughly Pelagian in his theology, not because he was ignorant of the Reformed faith, but because, although he had been taught it as a youth and young man, he had deliberately abandoned it. He was a sort of self-appointed evangelist and an itinerant preacher who pretty much “did his own thing,” without being responsible or accountable to anyone but himself. He was also and preeminently a revivalist, and his revivalism was unbiblical in all respects. This latter especially needs to be emphasized because revivalism is today a major element in evangelistic and even Reformed thinking. Many see the only solution to the church’s woes as revival. Many therefore confidently expect that it will come, and they pray earnestly for it. They pray against the will of God who does not work in His church in that fashion.

Revivalism and the Covenant

In the last article I criticized revivalism for a number of reasons. I waited till my final criticism to deal with what I consider the most important objection of all. I refer to the fact that revivalism does not and cannot have any proper conception of the covenant of grace. This charge is true on especially two counts. It has no biblical conception of the place of children in the covenant, and consequently it has a wrong view of conversion; and it lacks a proper and biblical conception of how God works salvation organically in the line of the covenant. About both I must say something.

Although this is the Reformed view of the covenant, many do not hold to such a conception. They insist that children of believing parents, though they may belong to the covenant outwardly, are not truly and inwardly in the covenant until they are converted, or, as some say, until they accept the provisions of the covenant. Especially in revivalistic preaching, conversion is the one condition that is required for salvation. If revivalists speak of a covenant at all (Finney did not), they emphasize that conversion is necessary for entrance into God’s covenant of grace.

This view leads to a very sad attitude that people take towards their children. Perhaps a personal experience will underscore this point. In our work in the British Isles we came up against a strange phenomenon in connection with people who were concerned about the work of salvation. People were constantly asking whether their children or their acquaintances or their fellow members in the church were either converted or unconverted. And, if they were considered converted, the time and place and circumstances of their conversion could readily be described. Furthermore, the more interesting the “conversion story,” the more likely the conversion was genuine. This was especially sad in the attitude that parents took towards their children. They watched eagerly for signs of conversion in their children as they grew up, and they dealt with their children as unconverted until such signs appeared, frequently only after their children had married and had families of their own. Children and young people, aware that their parents considered them unconverted, began to consider themselves as unconverted, and many concluded that, since they were unconverted, they might just as well live that way.

It struck us as strange that characterizing people as converted or unconverted should be so much on the minds of people. But it soon became evident that this whole tendency to judge people when we ought not to judge them arose out of a wrong view of the covenant and God’s way of working conversion.

Most people were unconverted, whether in the church or outside it. The churches were dead chiefly because they were filled with unconverted people, officebearers, and even ministers. Such a state of unconversion within the churches persists and seemingly grows worse. Revival is the one thing that can bring change. When revival comes, along with it comes mass conversions. Hundreds and thousands are brought under the conviction of sin and are introduced to the happiness that forgiveness can bring. The whole process, brought about by the revivalists, is accompanied by mass meetings, emotional preaching, and the most outrageous behavior imaginable. Especially strange and wrong behavior is supposed to be indicative of true conversion, although, even then, experts in what constitutes true conversion are sometimes required to judge whether a person’s experiences were genuine or not, for room is allowed for the deception of the devil, who likes nothing better than to give people a false sense of being converted, for that is the surest way to hell.

Add to all this mix the Arminian gospel of Finney, along with his anxious seat, and you have a situation where true conversion is the work of man, brought about by the revivalist who presses the claims of the gospel and demands an immediate decision, but who assures you that the final decision is yours to make.

How much more God-glorifying is the way the Holy Spirit saves. Without contesting the fact that sudden and remarkable conversions may take place on the mission field, especially in those foreign fields where the gospel has never been preached, we insist that, even on the mission field, the Holy Spirit as the Spirit of Christ ordinarily saves believers and their seed. He saves households, not individuals. He brings into the fellowship of the church covenant families, not solitary souls.

And when, within the covenant, the Holy Spirit works conversion, He does so in the elect children of believers in their infancy, or even before birth (Jer. 1:5). And when the Holy Spirit works conversion, He works it in such a way that it is quiet and all but unnoticed in the heart of the elect sinner and it continues all his life. He works, not through the earthquake, the fierce wind, the fire of revivals, but through the still, small voice (I Kings 19:9-18) of the irresistible power of His Spirit transforming the heart and mind. He works through the elect believer’s life so that daily the believer is brought to the consciousness of sin, flees to the cross, and finds peace in the blood of his Savior. He works so that the believer daily fights with sin within and without, and finds strength for battle in the cross. He works as a fern that I once saw, the spore of which was buried beneath the asphalt road, but which, slowly, without daily measurable growth, unnoticed and unattracting, nevertheless was able to force its way through two inches of tarmac.

This was the lesson Elijah had to learn. He thought revival had come on Mt. Carmel when all the people shouted, “Jehovah, he is the God.” But he found that once Carmel’s revival was over, Israel returned, as converts frequently do after revival, to their deadly normal way of life. He had to learn that fire, thunder, earthquakes, and wind will not accomplish God’s purpose. The still small voice of the Holy Spirit reserves to God a seven thousand who refuse to bow the knee to Baal.

As it is God’s purpose to save in the line of generations and thus to accomplish His decree of election, so it is also God’s purpose to accomplish reprobation in the line of generations. God visits the iniquity of the fathers upon the children unto the third and fourth generation of them that hate Him. Thus, when individuals forsake the church and turn their backs on the true gospel, these go lost in their generations. It is true that, as generations go lost, God saves a remnant out of these generations. Much of home missions consists of that work. But the time comes when a church (or a family within the church), once having departed from the way of truth, becomes the false church in which the blood of atonement is denied. So it was in the northern kingdom of Israel; so it is today.

In this way God completes His work. He saves the true human race of eternal election. That human race must be and is gathered from all the nations of the earth. Jesus points to the fact that one of the signs of His second coming is that “this gospel of the kingdom shall be preached in all the world for a witness unto all nations; and then shall the end come” (Matt. 24:14). The end comes because the gospel, having gone throughout all nations, has gathered the elect from all nations. But God’s work is always perfect. That same gospel has accomplished its sovereign purpose of hardening, and the whole world has, through its rejection of the gospel, become ripe for judgment.

God always performs His work in an orderly way. What is done in the church must be done decently and in good order because God does things orderly. Revivalism teaches that God, through special outpourings of the Holy Spirit, returns again and again to a dead church to bring revival. A church dies, the Holy Spirit brings revival; the same church dies again, revival comes again. And so it goes, on and on without any end. No, God does not work this way. He causes the gospel to be preached and He saves in the line of generations, believers and their seed. He hardens in the line of generations, unbelievers and their seed. In such a way the church is gathered from all nations and tribes and tongues, and the wicked are hardened in their sin and become ripe for judgment.

But the power is always the preaching. Our Heidelberg Catechism makes part of our confession of the church this statement: That the Son of God, by His Word and Spirit, gathers defends and preserves unto Himself a church… (Q. & A. 54). It is not revival that the church needs, but preaching. It is not special outpourings of the Spirit with horrible manifestations of power. It is the pure preaching of the gospel. It is Christ-centered, biblical and confessional, expository, lively preaching of the Word that the church needs. How sad it is when the church looks to revivals that will never come except in a form that does violence to all that Scripture teaches concerning God’s way of saving His church, all while true preaching falls in the streets.

Let the church tend to her task of preaching. When the church preaches, it is faithful to her divine commission. Then the Holy Spirit will work, by the still, small voice of His efficacious power, to save those ordained to eternal life. And God will accomplish His purpose to the glory of His name. 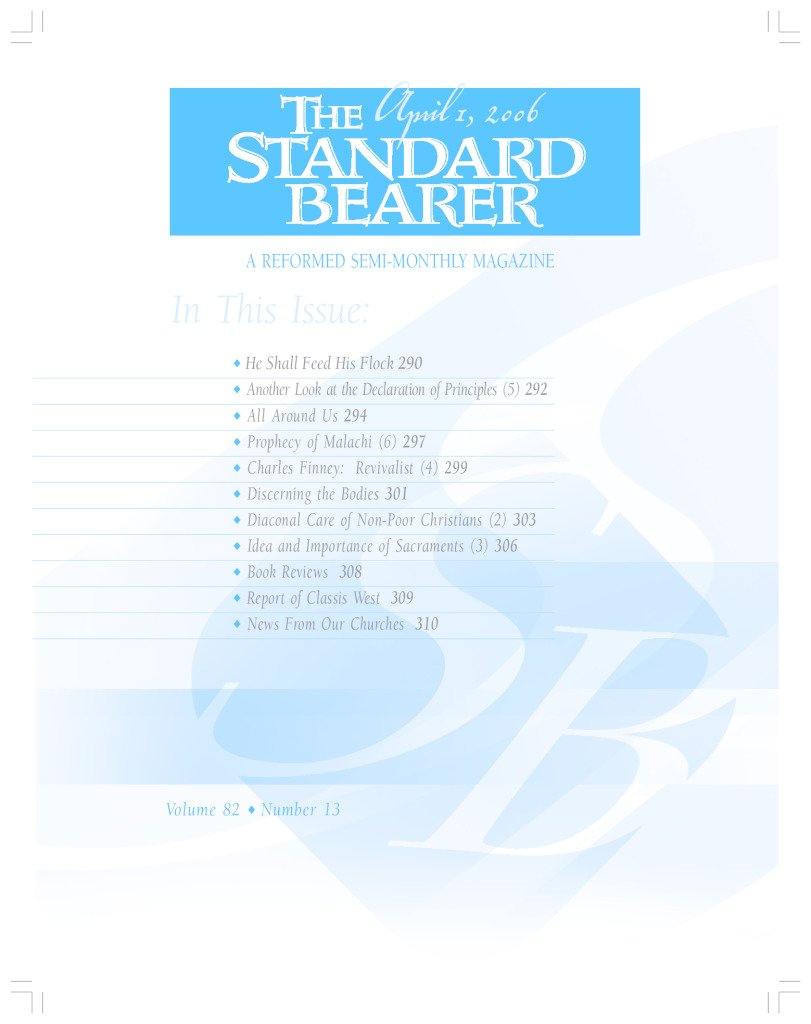