Prof. Hanko is professor emeritus of Church History and New Testament in the Protestant Reformed Seminary. Previous article in this series: December 1, 2005, p. 116.

It is something of a mystery how he managed to remain a minister in good standing in the Presbyterian Church in the US, because Finney departed from the doctrines and creeds of the denomination at significant points. He was, in his doctrinal position, an out-and-out Pelagian—insofar as he paid any attention at all to doctrine, for he was indifferent towards and uninterested in doctrinal matters.

His life revolved around revivals. And his reputation even today is of a great revivalist who brought awakening to a dead church. He developed a doctrine of revivals in which he claimed that revivals were brought about by men, seeming to eliminate the Holy Spirit’s work altogether. He claimed that in his day revival could be brought only by him—which was, as a matter of fact, true. When he went on a cruise in the Mediterranean Sea, or when on three different occasions he went to England, revivalism in America disappeared and churches fell back into spiritual lethargy.

He developed a method of revival preaching in which emotional preaching was dominant, and the anxious bench, the precursor of the altar call, was the means to force people to make an immediate decision for Christ.

Because it is not necessary to show how the Pelagianism of Finney’s views is unbiblical, and because Finney is especially noted for his revivalism, it is my purpose in this article to concentrate on the wrong of revivalistic doctrine and method.

It is clear that many supporters of revivalism appeal to the divine origin of revivals on the grounds that there is no other explanation for what takes place at a revival than that it is the work of the Holy Spirit. I shall not attempt to engage in a religious or psychological explanation for the bizarre behavior that frequently characterizes revivals, or even for the mass turnings to religion that are supposed to be the fruits of revivals. Mass hysteria explains much of it, especially because of what the Welsh, famous for their revivals, call a hywl. This term is used to describe the peculiar tone of voice and inflection that a revival preacher uses to arouse people’s emotions and to bring about what is truly a hypnotic state.

In the first quarter of the nineteenth century came the theology and practice of that arch-Pelagian Charles Grandison Finney, with his “new measures.” Finney organized the “anxious seat” method, in which new converts were exhorted to come to the front of the meeting and make profession of their faith, a practice that still characterizes much of evangelicalism to this day. In addition, Finney was able to deploy certain personal characteristics he had developed, the virtually hypnotic state, the sustained emotional harangue, and the branding of local ministers and elders as failures and hypocrites because their churches were (by Finney’s standard) “dead.” This contagious egocentric wrote voluminously, and his literature on “revival” amounted to being a manual of “how-to-do-it.”

My concern in this article is the question: Are revivals biblical? That is, do the Scriptures ever give any indication that the Holy Spirit works in a revivalistic way when He saves Christ’s church? Our answer to that question will determine our entire attitude towards revivals.

No Revivals in Scripture

If one attempts to find any evidence of revivals taking place in Bible times and recorded in Scripture, one’s search is futile. Scripture gives no evidence of anything approaching revivals. Defenders of revivals attempt to show that Scripture does contain records of revivals by appealing to reformations brought about in Israel during the times of Samuel (I Sam. 7:1-12) and reformations such as took place during the reigns of Asa (II Chronicles 15), Hezekiah (II Chronicles 29-31), and Josiah (II Chronicles 34, 35:1-19). But there are three reasons why appeals to these reformations are spurious. 1) They bear no resemblance whatsoever to the revivals that took place in our dispensation. 2) Though revivals are defined as being special visitations of the Holy Spirit, this could not have happened in the Old Testament times, because, as Scripture points out to us: “the Holy Ghost was not yet given” (John 7:39). 3) Israel was a picture, not of a given nation such as America or Wales, but of the spiritual church of Christ. Within the nation, Christ was being carried. God preserved the nation through good kings who brought about a measure of reformation so that Christ could come in the fullness of time. But such reformations have no resemblance to revivals.

Others appeal to Pentecost as a revival. How foolish such an appeal is! Pentecost was the time when the ascended Christ poured out His Spirit upon the church for the first time. That outpouring of the Spirit was not accompanied by bizarre behavior and strange conduct, but by signs that spoke of the work of the Spirit in the people of God and in the new dispensational church. It was a once-for-all event, though the Spirit continues in the church forever in the same way He was present with the church on Pentecost.

Revivals and the Church Institute

Revivalists worked in biblically wrong ways because of their disdain for the church institute.

Revivalists, with their frequent indifference to doctrine, were almost always broadly ecumenical. They, apart from their own personal beliefs, were willing to cooperate with anyone and everyone, in spite of heresy and unbiblical teachings. Arminians, Pelagians, deniers of infant baptism—revival brushed it all aside in the name of restoring spirituality to the church. In other words, revivalists believed that the Holy Spirit, the Spirit whom Christ has given to the church to lead the church into all truth, did not any longer care about truth when He began His revivalistic work.

Revivalists did not seek the unity of the church, but were divisive in their work and frequently brought schism to the church. This is a major point in Charles Hodge’s scathing critique of revivals in the Introduction to the book The Constitutional History of the Presbyterian Church. Revivalists damned the church as dead. They frequently entered congregations without the approval of the officebearers and began to preach to the people—if not in the church building itself, then in any appropriate place. They charged the ministers with being unregenerate if the ministers refused to cooperate with revivalistic efforts. And they did their work independent of the church in which they were working.

Our sermon [the sermon of Clement on which the author is commenting, HH] ends by calling all who are present to repentance. The preacher begs his listeners to repent from the bottom of their hearts that they might be saved. Evangelism did not require a special message preached for the unconverted, different from the one for the converted, nor did it mandate that the faithful hear and enthusiastically support again and again evangelistic sermons that were not really directed to them. Rather, when Christ is proclaimed as Lord and Savior, when God’s promises are proclaimed and a witness is given that God is faithful and that in Christ those promises have been fulfilled, and will yet be fulfilled, then evangelism is done. Whenever the way of life which Christ taught his disciples is shown to be the fulfillment of the Law and the prophets, then evangelism is done. Whenever the beauty and the power and the sheer joy of holiness are proclaimed and God’s people see that this is something for them, evangelism is done. When Christian preaching is done the way it should be done, then it is evangelistic.

It is not surprising that revivals and charismatic meetings have many things in common, for both are mystical. Mysticism speaks of revelation directly from God to the individual without the mediation of Scripture. Wesley believed he had such direct contact with God; so did Finney. As we noticed in an earlier article, Finney frequently spoke of inner voices or feelings that guided him in what he did and where he went.

Robert G. Tuttle, himself a Wesleyan Methodist, points out in his book Mysticism in the Wesleyan Tradition that mysticism tends to bypass Jesus Christ. This is understandable. Scripture tells us that Christ is the revelation of God, and he who sees Christ sees God also. Jesus tells Philip at the time of the Last Supper, “He that hath seen me hath seen the Father” (John 14:9). When mystics claim to have direct contact with God, as Evan Roberts, the father of the Welsh Revival of 1904-1905, claimed, and as Finney claimed, they were bypassing Christ. From bypassing Christ in revelations, it is inevitable that such mysticism would also bypass Christ in prayer, in faith, and in doctrine. Finney really had no room for Christ in his theology and preaching. 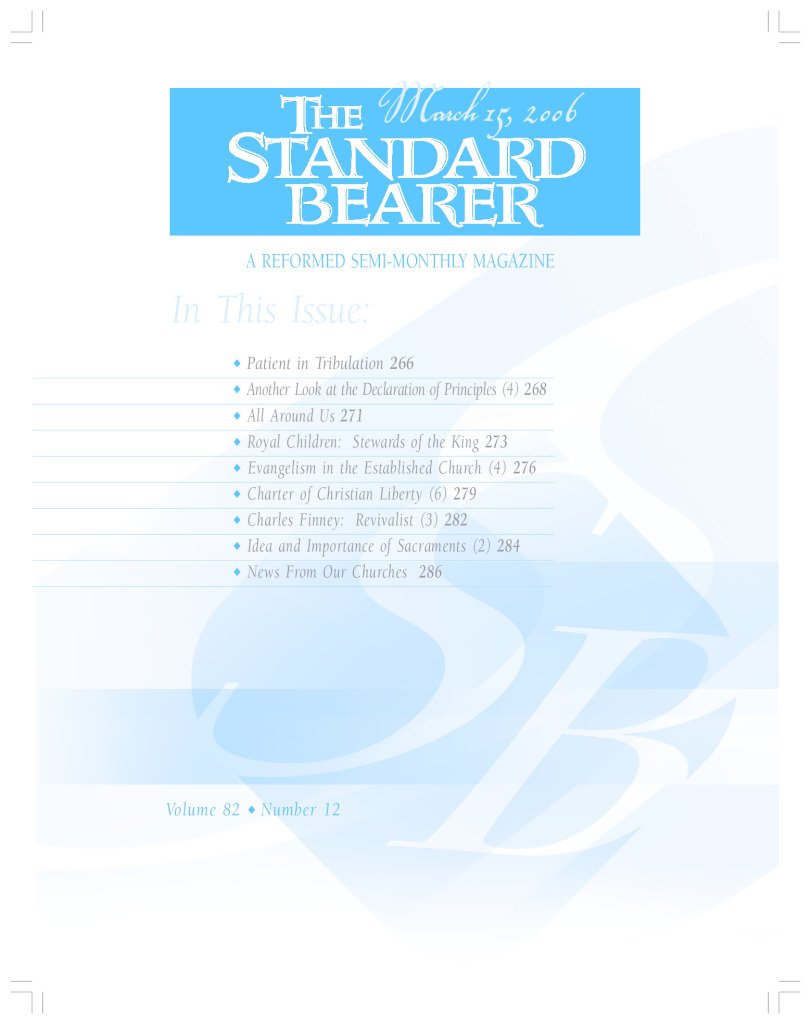