Prof. Hanko is professor emeritus of Church History and New Testament in the Protestant Reformed Seminary. Previous article in this series: February 1, 2005, p. 210.

Theistic evolutionists have fatally compromised the biblical doctrine of creation and sold out to unbelieving science. To accomplish this, and because they must still appear to be Bible-believing Christians, they have reinterpreted and misinterpreted Scripture, specially in Genesis 1-3. Realizing that Genesis 1-3 is not the only part of Scripture that needs reinterpreting to defend their viewpoint, they have also come to reinterpret Genesis 1-11, not to speak of other parts of Scripture where creation in six days is clearly taught.

We must briefly examine the wrongness of the approach of theistic evolutionists.

A Wrong View of Faith

Before making more specific criticisms of the position of the theistic evolutionists, I call your attention to the fact that there is one grave error that is made, not only by theistic evolutionists, but by many creationists as well. This error is described in Del Ratzsch’s book Battle of Beginnings: Why Neither Side Is Winning the Creation-Evolution Debate. Ratzsch himself does not, apparently, dispute the point that is made, although it is as wrong as wrong can be and leads to all sorts of confusion.

Both models, creationists claim, are beyond the reach of human proof—and consequently are not parts of real (inductive) science. (Gish, though, sometimes appears to subsume both theories under “faiths,” then claims that there is overwhelming evidence both for creationist and against evolutionist faith).

Gish goes on to say, according to Ratzsch, that since indirect, circumstantial evidence does not either constitute proof for or measure up to creationist definitions of science, the acceptance of either will constitute only belief.

There is an important point here, not widely understood, but a serious point that we have to get straight.

I remember being told this very thing in the days of my schooling. The moral of the story was usually: You need not be ashamed of your faith; even the evolutionist rests his case on faith.

Now this sort of argumentation is not only dead wrong, but it is pernicious as well. If both the theory of evolution and the doctrine of Scripture rest on faith, then faith is nothing else but the blind acceptance of unproved and unprovable assumptions. But then the argument is reduced to a debate over who has the best line of argumentation and can summon the best proof for his position. We will acknowledge that both start with faith; now let’s evaluate the lines of proof and see who has the better of the debate.

God forbid that our defense of creationism should ever come down to that!

The fact of the matter is that we who believe in creation have an ironclad case that is unassailable. We have absolute proof for creation, proof than which there is no stronger. That proof is that God Himself tells us how He made the world. If that isn’t proof, then I do not know what is.

I have sometimes used this illustration. A group of men travel to a castle on the Rhine River in Germany to learn how that castle was constructed. Upon crossing the drawbridge over the moat and entering the castle they discover a book lying on the table, written by the architect and builder of the castle, explaining exactly how he accomplished this task. But this learned group of Ph.Ds, upon examining the book, decide that the author described his work in symbolic ways and that the book is of no use in their quest to learn how the castle was built. So they proceed through the castle, picking up a bag of dust here (to analyze in the laboratory), pulling out a stone in another place, examining under a magnifying glass various pits in the rocks, various parts of broken walls, various ruins made almost meaningless by the erosion of time. They collect all their data and decide, after ponderous discussion, that the castle came into existence by itself, although some superintendent, 10,000 miles away, may have attempted from time to time to offer some guidance.

We will never agree with the definition of faith that it is the blind acceptance of unproved assumptions.

What is faith? Faith is the bond that unites the elect child of God in a living connection with Jesus Christ. Faith is a complete change of the darkened mind into one able to think properly and correctly. Faith is a change of a stubborn will into one that makes a believer a humble servant of Jesus Christ. Faith gives a knowledge that no one without faith can possibly possess. Faith sees Scripture and Scripture’s claim to be the Word of God—and believes it. And faith is such a power that, when believing the Scriptures, it brings one face to face with Christ Himself, to know Him in a rich, blessed, wonderful, and saving way.

Del Ratzsch, in his book mentioned above, points us to various weaknesses in the arguments of both creationists and evolutionists. But then he finally comes to the one major point: What role does Scripture play in all this? And he is silent.

Creationists, however, typically advance one further type of objection, and that is that theistic evolution cannot be reconciled with many of the details taught by the early chapters of Genesis…. Underlying this type of objection are two presuppositions: first, that a faithful and responsible reading of Genesis requires that it be understood literally, and second, that understood literally, early Genesis actually teaches what creationists think it does. I will not address those issues here.

In other words, the one point that is more important than any other will not be discussed.

Scripture tells us that “By faith we understand that the worlds were framed by the Word of God, so that things which are seen were not made of things which do appear” (Heb. 11:3). This passage teaches, among other things, that faith is the only way in which one can understand creation.

That kind of knowledge, which is the only true knowledge, is by faith.

Theistic evolution is wrong right down the line.

Because it accepts that law as truth, theistic evolution believes (and must believe, to maintain its position) that there was death before the fall. How can one have a fossil record that is millions, if not billions, of years old unless death was present in the creation before man appeared on the scene and sinned, bringing down on him and the creation the curse of death?

That death came into the world through the fall is taught by Paul in Romans 5:12-14: “For as by one man sin entered into the world, and death by sin….” Perhaps we cannot imagine a world in which there was no death. No matter. “By faith we understand that the worlds were framed….”

Theistic evolutionists, as we pointed out, must deny the literal meaning of Genesis 1-11. This is difficult to do. It is, in fact, so difficult that we get a new interpretation of these chapters about every ten years or so. I pointed this out earlier and need not belabor the point here. Let us, however, be aware of the fact that, if Genesis 1-11can be interpreted in a way that is not literal, then any historical narrative, including the virgin birth, atoning sacrifice, and bodily resurrection of Christ, can also be interpreted symbolically, doxolog—ically, or whatever. And indeed, the force of logic compels those who will not takeGenesis 1-11 literally to reject many other parts of sacred Scripture.

Theistic evolutionists deny providence. In his defense of the Framework Hypothesis as an interpretation of Genesis 1, Lee Irons speaks of creation taking place by “ordinary providence,” rather than “special providence.” By ordinary providence, Irons means the laws of nature. That is a denial of providence altogether. Providence teaches, not that the creation operates by natural law, but that God, who created all by the Word of His mouth, continues to speak that same Word so that the creature continues to exist. Providence teaches that God, who upholds the beetle and mosquito as well as the planet Jupiter by His almighty Word, directs each creature in all its existence in the pre-ordained way that He has determined. This includes man—and his unbelief. God moves every drop of blood in my veins, and guides the ant across the sidewalk at my feet. God brings rain to water the earth, and water from the rock at Rephidim. God causes the deer to bring forth their young (Ps. 29) and brings about the conception of a new child in the womb of its mother. Theistic evolution denies providence.

Theistic evolution denies Christ. That is a bold statement, but true. Already when I was taught the period theory in college, the class was told that it did not make any essential difference whether one was a creationist or an evolutionist, because neither had anything to do with our faith. We could believe in the period theory and in Jesus Christ as our Savior. Genesis 1 had nothing to do with the gospel.

This is a ploy to deceive the unwary.

Christ has everything to do with creation. Proverbs 8 claims for Christ, the Wisdom of God, “I was set up from everlasting, from the beginning, or ever the earth was…. When he prepared the heavens, I was there…, rejoicing in the inhabitable part of the earth” (Prov. 8:23, 27, 31). John 1 boldly says, “In the beginning was the Word, and the Word was with God, and the Word was God. The same was in the beginning with God. All things were made by him; and without him was not anything made that was made” (John 1:1-3). Paul sings a doxology of praise to God in Christ “who is the image of the invisible God, the firstborn of every creature: for by him were all things created, that are in heaven, and that are in earth, visible and invisible…: all things were created by him, and for him: and he is before all things, and by him all things consist” (Col. 1:15-17). And Hebrews 1 introduces the whole book with the words: “God, who at sundry times and in divers manners spake in time past unto the fathers by the prophets, hath in these last days spoken unto us by his Son, whom he hath appointed heir of all things, by whom also he made the worlds” (Heb. 1:1, 2).

When God pronounced His creation “good,” He meant by that word that everything that He had made was perfectly adapted to the purpose for which He had created it. That purpose is the full revelation of His own glory in Jesus Christ, His eternal Son, through whom is the redemption of an elect church and the whole of the new heavens and the new earth. The original creation was perfectly formed to be the stage on which, over 6000 years, would be enacted the drama of salvation from sin and death in Christ.

To deny creation is to deny salvation in Christ.

To believe in creation is to be saved by Christ. 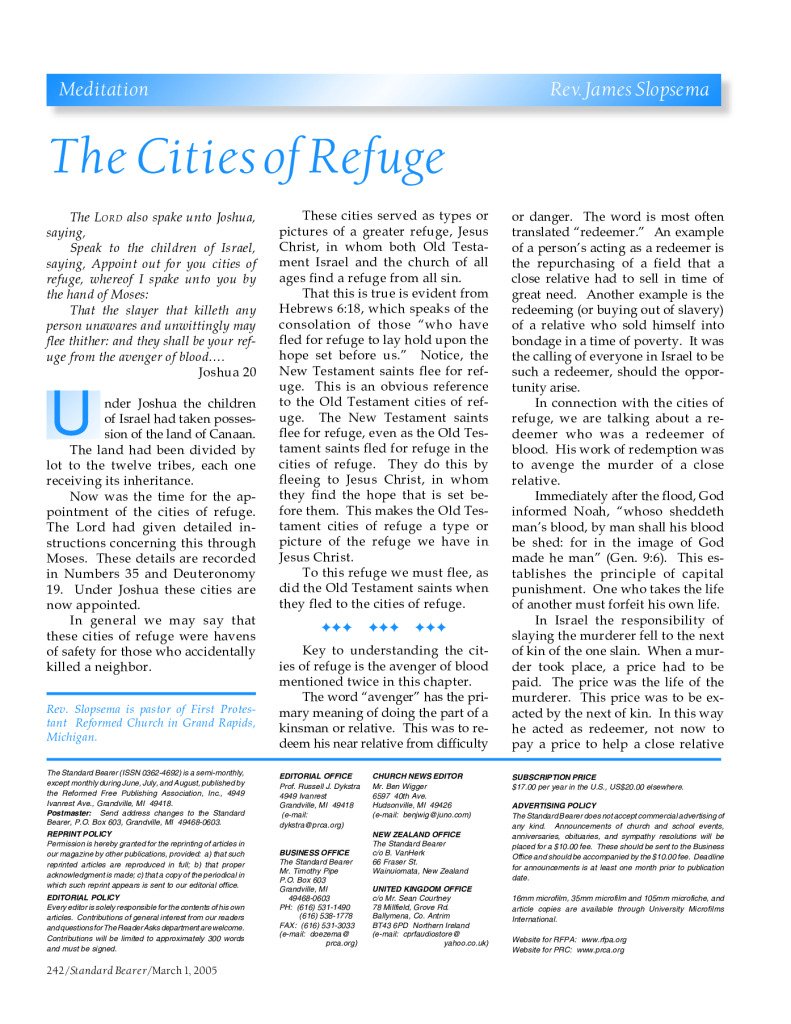