In previous articles, I have set forth and defended the Reformed doctrine of the intermediate state of elect believers. At the moment of death and by means of death, which Christ has made the servant of our salvation, God separates the soul and the body. What God has joined together in the creation of man in the beginning and in the conception of each individual human, God can, and does, put asunder. In the body, the believer sleeps in the grave until Christ awakens him in the resurrection of the body. In the soul, the believer is raised by Jesus into conscious, heavenly life and glory immediately upon the believer’s dying.

In Roman Catholic theology and practice, purgatory is the place in which the souls of the saints, with the rare exception, are purged of the pollution of sin that continues to defile them upon their death. The saints purge themselves of this pollution by suffering punishment for their sins. Only after thus purging themselves by satisfying for their sins are the souls of the saints received into heavenly bliss and glory.

Rome adopted the doctrine of purgatory as official, binding church dogma in the Canons and Decrees of the Council of Trent (A.D. 1563).

The [Roman] Catholic Church . . . has . . . taught . . . in this ecumenical Synod that there is a Purgatory, and that the souls there detained are helped by the suffrages of the faithful, but principally by the acceptable sacrifice of the altar (“Decree Concerning Purgatory,” in Philip Schaff, Creeds of Christendom, vol. 2, Baker, repr. 1983, 198).

Significantly, Trent also taught purgatory in its defense of justification by faith and works.

If any one saith, that after the grace of Justification has been received, to every penitent sinner the guilt is remitted, and the debt of eternal punishment is blotted out in such wise that there remains not any debt of temporal punishment to be discharged either in this world, or in the next in Purgatory, before the entrance to the kingdom of heaven can be opened [to him]: let him be anathema (“Decree on Justification,” in Schaff, Creeds, 117)

Inseparably bound up with the monstrous heresy and heretical monstrosity that is the Roman Catholic doctrine and practice of purgatory are prayers for the dead (which lessen the torment and shorten the stay of the dead in purgatory), indulgences (which are papal certificates bought with money or earned by meritorious works also lessening the torment and shortening the stay of the dead in purgatory), and masses for the dead (which are, in Roman Catholic theology, the priests’ sacrificing of Christ again and again “in an unbloody manner” for the remission of the sins of those satisfying for those sins in purgatory).

A Protestant recalls the powerful role that purgatory and its attendant evil, indulgences, played in the sixteenth century Reformation of the church. In the providence of God, purgatory occasioned the Reformation. The Roman cleric Tetzel was selling indulgences in the precincts of Wittenberg with the effective ditty, “As soon as the coin in the coffer rings, the soul from purgatory springs.” Tetzel dug deeply into the pockets of the German faithful, as Rome still does today, into the pockets of her members in all nations, by preaching purgatory with this pathetic plea: “Listen to the voices of your dear dead relatives and friends, beseeching you and saying, ‘Pity us, pity us. We are in dire torment from which you can redeem us for a pittance.”

This most sacred Synod accepts . . . the venerable faith of our ancestors regarding this vital fellowship with our brethren who are in heavenly glory or who are still being purified after death. It proposes again the decrees of the . . . Council of Trent (The Documents of Vatican II, ed. Walter M. Abbott, S.J., The America Press, 1966, 83, 84)

Some of His [Christ’s] disciples are exiles on earth. Some have finished with this life and are being purified. Others are in glory (Documents of Vatican II, 80).

[Vatican II teaches, approves, and confirms the doctrine and practice that] because it is “a holy and wholesome thought to pray for the dead that they may be loosed from sins” (2 Mach. 12:46), she [the Roman Catholic Church] has also offered prayers for them (Documents of Vatican II, 81).

The Greeks teach of one eternal fire alone, understanding that the temporal punishment of sinful souls consists in that they for a time depart into a place of darkness and sorrow, are punished by being deprived of the Divine light, and are purified—that is, liberated from this place of darkness and woe—by means of prayers, the Holy Eucharist, and deeds of charity, and not by fire [whereas Rome teaches purification by “purgatorial fire”—DJE] (Ivan N. Ostroumoff, The History of the Council of Florence, tr. Basil Popoff, Holy Transfiguration Monastery, 1971, 48, 49).

The only other text in the canonical Scriptures that Rome half-heartedly appeals to as teaching purgatory is I Corinthians 3:12-15: “Now if any man build upon this foundation gold, silver, precious stones, wood, hay, stubble; every man’s work shall be made manifest: for the day shall declare it, because it shall be revealed by fire; and the fire shall try every man’s work of what sort it is. If any man’s work abide which he hath built thereupon, he shall receive a reward. If any man’s work shall be burned, he shall suffer loss: but he himself shall be saved; yet so as by fire.” The only possible, superficial connection this text has with purgatory is its mention of fire in the context of the saving of some in the final judgment. What the apostle teaches in the passage is that some ministers, although personally elect believers, who will be saved at the final judgment, corrupt their ministerial work in the church so that their bad works—teachings and behavior—will be burned up as worthless (“wood, hay, stubble”).

Rome itself realizes that there is no proof of purgatory in the canonical Scriptures. Therefore, she has always grounded her doctrine of purgatory on the teaching of prayers for the dead in the apocryphal book of II Maccabees, chapter 12, verses 42-46:

But the most valiant Judas exhorted the people to keep themselves from sin, forasmuch as they say before their eyes what had happened, because of the sins of those that were slain. And making a gathering, he sent twelve thousand drachms of silver to Jerusalem for sacrifice to be offered for the sins of the dead, thinking well and religiously concerning the resurrection, (for if he had not hoped that they that were slain should rise again, it would have seemed superfluous and vain to pray for the dead,) and because he considered that they who had fallen asleep with godliness, had great grace laid up for them. It is therefore a holy and wholesome thought to pray for the dead, that they may be loosed from sins (Douay-Rheims version, Baltimore, 1899).

This appeal to II Maccabees brings home to Protestants the significance of the Reformation’s distinction of the “sacred books” of the canonical Scriptures from the “apocryphal” books accepted by the Roman Catholic Church, including I and II Maccabees, and its exclusion of the apocryphal books from the canon. In the words of the Belgic Confession, II Maccabees is “far from having such power and efficacy as that we may from [its] testimony confirm any point of faith or of the Christian religion; much less detract from the authority of the other sacred books” (Belgic Confession, Articles 4 and 6, in The Confessions and the Church Order of the Protestant Reformed Churches, Protestant Reformed Churches in America, 2005, 25, 26).

Purgatory is a denial of the cross of Christ. Fundamental to that heresy is the teaching that Christ did not, by His one sacrifice of Himself on the cross, fully satisfy the justice of God with regard to all the guilt of all the sins of those for whom He gave His life. According to the doctrine of purgatory, after Christ died, in spite of His triumphant declaration, “It is finished,” some guilt of some sins of those for whom He died remains unpaid. Sinners must see to the payment of this guilt and must satisfy divine justice regarding these sins themselves. They must do so in the fires of purgatory. This doctrine is condemned by Hebrews 10:12, 14: “But this man [Jesus Christ], after he had offered one sacrifice for sins for ever, sat down on the right hand of God . . for by one offering he hath perfected for ever them that are sanctified.”

Contemporary Roman Catholic theologians and apologists exert themselves to minimize and even obscure this aspect of the Roman doctrine of purgatory, especially in ecumenical discussions. They emphasize rather that purgatory is intended to purify the dead. But the fact remains—the fact of Rome’s confessional statement concerning purgatory—that this purging takes place by means of the suffering of the punishment of a certain aspect of the guilt of sin.

The doctrine of purgatory is destructive of the hope and comfort of those who believe it, in the face of death, that “king of terrors.” At the instant of death, the Roman Catholic can look forward to the torments of excruciatingly painful fire in the punitive wrath of God (the Roman Catholic will be paying for his or her sins). The only difference between this fire and the fire of hell is that eventually the purgatorial fire will burn itself out in his or her soul.

The Italian poet Dante gave vivid expression to the agonies of purgatory in his Purgatorio. What purgatory is both in Roman Catholic theology and in the mind of the people Dante expressed when, about to enter purgatory, he said: “Now shall I sing that second kingdom [hell being the first kingdom and heaven, the third—DJE] given/the soul of man wherein to purge its guilt/and so grow worthy to ascend to Heaven” (Dante Alighieri, The Purgatorio, tr. John Ciardi, New American Library, 1957, 320). The agony of purgatory, Dante pictured in many descriptions of torment, including that of fire: “And there I was—the flames/to the left of me, and the abyss to the right/. . . I could not help but look into the fire./Then I saw spirits moving through the flames/. . . as long as they must stay/within the holy fire that burns them there” (The Purgatorio, 257, 258).

Understandably, purgatory has always filled dying Roman Catholics with dread, and the bereaved with anguish.

Luther was not too strong, therefore, when, in the Smalcald Articles (A.D. 1537), he damned purgatory as the “vermin” begotten of the “dragon’s tail” and as the “devil’s ghost.” He was right also in exposing its fundamental error: “For it [purgatory] conflicts with the chief article: only Christ, and not human works, can set souls free (Galatians 5:1)” (“The Smalcald Articles,” in Concordia: The Lutheran Confessions, Concordia, 2005, 291).

The gospel of salvation by grace alone in its basic tenet of justification by faith alone demolishes the fiction of purgatory. The dying believer is justified by faith alone in Jesus Christ, who paid the price of redemption from sin, death, and hellish agonies completely. No wrath of God remains, only the bliss and glory of the divine grace in Jesus Christ. Being with Christ and, in Him, enjoying the beatific vision of God, immediately upon death, in the soul, are his sure hope and mighty consolation in the face of impending death.

With regard to the purifying of the soul, without which the dying believer cannot be taken into the presence of God in heaven, that holy of holies, Christ wonderfully purges the soul of all the defilement of sin at the instant of death by His Holy Spirit.

Hellish fires, suffered by the soul of the believer after death, could not accomplish such purging.

Only the grace of the Spirit of the crucified Christ can, and does, wash away our sin. 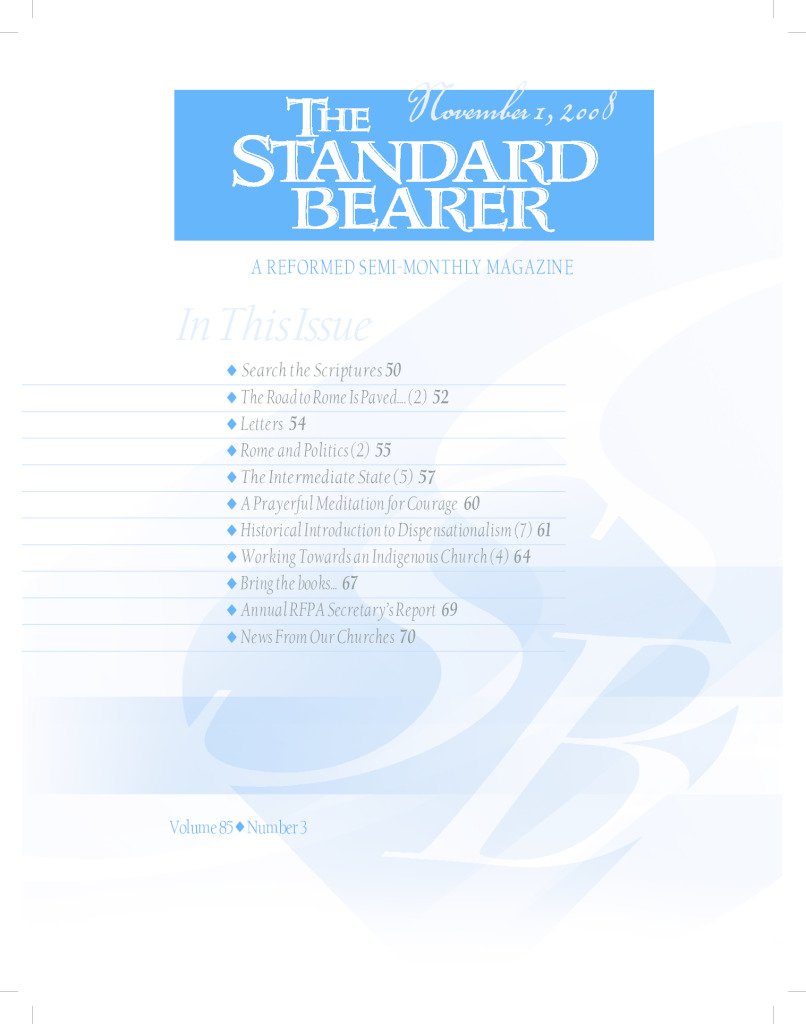