Hence, chapters four and five of the Confession treat the subjects of creation and providence, following the decrees of God in chapter three.

In this issue let us consider Chapter IV — of Creation.

1. It pleased God the Father, Son, and Holy Ghost(a) for the manifestation of the glory of His eternal power, wisdom and goodness(b) in the beginning, to create, or make of nothing the world, and all things therein, whether visible or invisible, in the space of six days, and all very good.(c)

2. After God had made all other creatures, He created man, male and female,(a) with reasonable and immortal souls,(b) endued with knowledge, righteousness, and true holiness, after His own image,(c) having the law of God written in their hearts,(d) and power to fulfill it;(e) and yet under a possibility of transgressing, being left to the liberty of their own will, which was subject unto change.(f) Beside this law written in their hearts, they received a command not to eat of the tree of the knowledge of good and evil;(g) which while they kept, they were happy in their communion with God, and had dominion over the creatures.(h)

The first section establishes the fact that the world and all within it are not self-existent, nor eternal. That they exist is because of the creative power of the one, only, true God.

This applies equally to that which cannot be seen as well as to that which can be seen. “Visible and invisible” is the language of Colossians 1:16. By things invisible is meant space and time, concepts, and spirit being.

That all things within the world had a beginning is proven by the Scriptural references which speak of a “time” (we call it time for the obvious lack of better terminology) when the world was nonexistent. “Before Thou hadst formed the earth and the world, even from everlasting to everlasting, Thou art God” (Psalm 90:2). Also Jesus speaks of the glory “which I had with Thee before the world was” (John 17:5,24).

Also, the Scriptures never imply the presence of anything pre-existing or anything without God’s creation. “By the word of the LORD were the heavens made; and all the host of them by the breath of His mouth” (Psalm 33:6). “Through faith we understand that the worlds were framed by the word of God, so that things which are seen were not made of things which do appear” (Hebrews 11:3).

That to God is attributed the creation of the world and all therein is contrary to the findings of ungodly science. Such, so-called, science concludes with an evolutionary process which determines the age of the world to be in the millions and billions of years.

What difference does it make that the Bible and the Confession were written long before the science of geology came into existence? The truthfulness of the facts and/or theories of science is determined only by their agreement to Scripture. It is the Word of God alone which serves as the basis for all truth. God’s Word is not to be reconciled to a discovery or theory of man.

Through faith we believe that the record in Genesis has been given by divine revelation and, therefore, is infallibly true. The Scriptures and the book of creation (nature) are both of God and perfectly agree. If it appears that these two do not coincide, then the facts or theories supposedly derived from creation are imperfectly understood.

As the motivation of the eternal decrees of God is “the manifestation of His glory” so, we are told immediately, it is for the execution of those decrees in creation.

Creation took place not of itself in an evolutionary manner, Nor were things created by a power other than the one true God. He is THE Creator. And He created for Himself. Romans 11:36 tells us that all things are “of Him.” “All things were created by Him” (Colossians 1:16).

Not only is it a Biblical truth that all things are of Him, but also all things are “to Him” (Romans 11:36) or “for Him” (Colossians 1:16). Proverbs 16:4a states it explicitly, “The LORD hath made all things for Himself.” Revelation 4:11 gives us more of the same: “Thou hast created all things, and for Thy pleasure they are and were created.”

Let us look about us and examine creation from this perspective! Let us look for the glory of God’s power, wisdom, and goodness in creation. See His glory in the heavens. See it and marvel in the human body. Wonder in awe as you see it in animals, fish, and fowl. See it in a leaf and blade of grass. And return to God the glory.

“Thou art worthy, O Lord, to receive glory and honour and power: for Thou hast created all things, and for Thy pleasure they are and were created.”

We record here without comment the interesting reference to angels found in the Larger Catechism, but not found in the Confession.

Section two deals with the creation of man, the crowning work of creation.

Last of all, God created man. Man’s place is last to indicate that he is the end and crown of all creation. In the creation week God was building up to the climactic creation of the king of creation: man. All of creation serves man, that he, in turn, might serve God.

Evolution denies that man was created by God. It makes man the last in a long chain of gradual and successive developments from the lower and more simple.

That man was created directly by God is positively given to us in Genesis 1:26-27 and Genesis 2:7.

God created man one human pair, male and female. From this couple the entire human race in all its varieties has descended by generation. This is taught explicitly in Acts 17:26, “And hath made of one blood all nations of men for to dwell on all the face of the earth.” The genealogies of Genesis 10 shows clearly the same. Also this is implied in the Scriptural doctrine of original sin. Job 15:4, “What is man, that he should be clean? and he which is born of a woman, that he should be righteous?”

A reservation must be expressed against the use of the term “immortal.” The same criticism applies to the same use of this term in the Belgic Confession, article 37. It seems that this philosophical conception was current at the time of the formulation of these creeds. What is meant is that there is existence after death. But the term “immortal” very poorly expresses this idea, first, because the word itself means “not able to die” and man, body and soul, certainly came under the penalty of death at the fall into sin, and secondly, the Scriptures use the term only to refer to the glorified state of the believer after death (cf. I Corinthians 15:53).

The confession continues its description of man as God created him by stating that God created man after His own image, namely, endued with knowledge, righteousness, and true holiness. Man resembled God in a creaturely way, i.e., he reflected creaturely God’s perfections. That means that he possessed a reasonable soul; he was a rational, moral being. As God created him, man stood in a positive relationship to God. He was capable of a right apprehension of all things, including God, and also he was capable of doing that which was right, being within himself also right with God.

The fathers continue to describe man’s original position by saying, “Having the law of God written in their hearts.” We do not question this description as being apt, but we seriously question the use of Romans 2:14-15 as Biblical support for this. Romans 2:15 speaks of the “work of the law written in their hearts,” not of the law itself being written there. That in the first place. Also, the reference in Romans 2:14-15 is to those who are not believers. It is the work of God’s re-creation within His chosen people in regeneration that gives us insight into how God originally created man. Confer Ephesians 4:24 and Colossians 3:10. We concur with Martin Luther’s exposition of Romans 2:15 in his commentary on this text.

Although Adam was created holy and capable of obedience, he was at the same time capable of falling. The terminology of the Confession is being left to the liberty of their own will. This does not mean that Adam and Eve were sovereignly free, for they were always within the bounds God had set for them. Nor was their liberty that they could determine what was good for themselves. God told them to obey Him by eating of the Tree of Life and not eating of the Tree of the Knowledge of Good and Evil. God commanded I them to choose the good and reject the evil.

Rather, the liberty of their own will means that they were morally free. They were able to do good, but they could fall; they could entertain sin. The Tree of the Knowledge of Good and Evil placed them concretely before this choice of good or evil, of obedience or disobedience. If they obeyed, they would know good and evil in the love of God: loving good and hating evil. But if they disobeyed, they would know good and evil in enmity against God: loving evil and hating good. God placed them concretely before the Tree of Life which represented joyful fellowship with God in the way of obedience.

So it pleased God for the manifestation of the glory of His eternal power, wisdom, and goodness to create the world, and all things therein, and all very good. 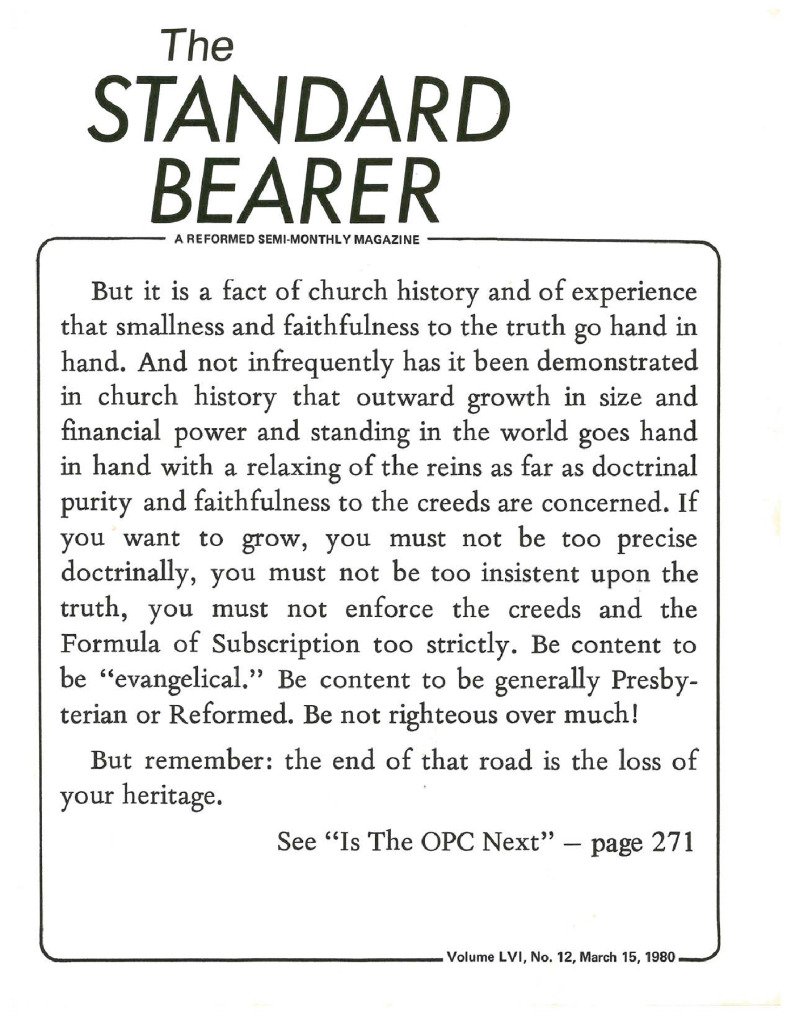