Chapter Four: Postmillennialism (8): Hoeksema’s Interpretation of the Loosing of Satan

Chapter Four: Postmillennialism (8): Hoeksema’s Interpretation of the Loosing of Satan

The explanation of the loosing of Satan, in Revelation 20:7-9, that I have given differs from that of Herman Hoeksema. Whereas I understand the loosing of Satan as Christ’s freeing him to unite the nations under Antichrist in a worldwide assault upon the true church, Hoeksema explained it as referring to the battle of Armageddon.

The battle of Armageddon, mentioned only in Revelation 16:16, will be a physical war between two distinct elements of the kingdom of Antichrist. One element will be the nations of the West, descended from the old Roman empire, as Daniel 7:19-26 prophesies. These nations are strongly influenced by Christianity and, therefore, nominally Christian. From these nations, the personal Antichrist will arise, and among these nations will be the seat of power of the antichristian world-power.

The other element will be the pagan nations of the world. These are the nations referred to as “the kings of the east” in Revelation 16:12.

For a short time, Antichrist, the beast out of the earth ofRevelation 13:1-10, will succeed in uniting these two groups of nations in one political federation, one kingdom, one empire, under his aegis. This will be the time of the great tribulation for the church (Matt. 24:21) and of the killing of the two witnesses (Rev. 11:7-10).

But the magnificent kingdom of Satan and Man will last only a short while. For towards the very end of history, immediately before the coming of Jesus Christ, God will devastate the world-power of the Antichrist in His wrath. He will do so by the judgments of the seven vials of Revelation 16. One of these judgments—the sixth vial—will be the breakup of Antichrist’s kingdom by the battle of Armageddon (Rev. 16:12-16). The pagan nations of the East, whose attachment to the Antichrist was tenuous, will declare ³war on the nominally Christian nations of the West.

To the world engulfed in war, Jesus Christ will return in the body, to destroy the personal Antichrist, raise the dead, conduct the final judgment, renew creation, and usher in the new, everlasting age.

Hoeksema interpreted the loosing of Satan, resulting in the attack of the nations, Gog and Magog, upon the camp of the saints and the beloved city, in Revelation 20, as the battle of Armageddon. “What is here [in Rev. 20:7-9] presented in a separate vision had partly been pictured in a different setting in…Chapter 16:12-16…[as the] battle [that] will be realized in the period of the sixth vial.”¹ In his outline of the contents of the book of Revelation, Hoeksema explained the loosing of Satan this way: “III. Satan loosed: 1. Deceives the nations: a. A great number. b. Their deception: 1) They purpose to fight against Christ and His Church. 2) Which actually in the nominally Christian world is Antichristendom. c. Once again the battle of Armageddon. Cf. chapter 16:12ff.”² Revelation 20:7-9, therefore, does not predict the war of Satan against the true church towards the end of history, but a battle of the heathen nations of the world against “the nominally Christian world,” against “nominal Christianity,” against “Christendom, no matter how apostate.”

According to Hoeksema, the battle of Satan’s hordes against the camp of the saints and the beloved city will be a war of the pagan nations of the world against the nations that constitute the center of the antichristian world-power.

A Removal of the Church before the End

This explanation of the loosing of Satan and the battle that ensues is closely related to Hoeksema’s strange teaching that the true church will be taken out of the world into heaven at the onset of the outpouring of the wrathful judgments of God upon the antichristian kingdom, some time before the second coming of Christ.

Hoeksema proposed this event in his interpretation of the resurrection and ascension of the two witnesses, inRevelation 11. The two witnesses represent the true church. The beast from the abyss, which is Antichrist, will make war against the two witnesses, overcome them, and kill them (Rev. 11:7). “After three days and an half the Spirit of life from God entered into them, and they stood upon their feet; and great fear fell upon them which saw them. And they heard a great voice from heaven saying unto them, Come up hither. And they ascended up to heaven in a cloud; and their enemies beheld them” (Rev. 11:11, 12).

Hoeksema explained the resurrection and ascension of the two witnesses as teaching that “before the time of the end, while the Antichrist and the Gog and Magog are still on earth, the church shall be taken away from her shame and persecution and terrible suffering. The living saints shall be changed. Those who have died shall be raised. And the church of Christ shall be glorified.” Prior to the judgments that fall on the antichristian kingdom, “the church is already in heaven.” After this deliverance of the church, “history shall be continued for a while.”4

Hoeksema returned to this teaching in his consideration of the seven vials, in Revelation 16. Noting that the judgments of the seven vials “touch only the children of wrath,” Hoeksema explained: “I know of but one reason, namely, this, that the church has been taken away. At the beginning of these signs they have been taken up into glory, and they do not have to suffer because of these universal plagues.”5 Regarding the battle of Armageddon—the sixth vial—in Revelation 16:16, Hoeksema asserted: “In that last battle the people of God shall have no part. They shall have been taken away…The Lord will come as a thief, unexpectedly, unawares…to take His people away from the earth…. The church of God shall be upon earth no more.”6

He found the removal of the church from the earth before the coming of Christ also in the call to the saints to separate themselves from Babylon, in Revelation 18:4.

They shall be removed. The voice mentioned here will go forth with power; and the people of God shall be taken away from the world. Not, indeed, as if a long period would intervene between the removal of the last of God’s children and the end of the world; but they shall be removed. The voice…will call powerfully the faithful and chosen from the midst of the arena of strife and tribulation to be with Christ in glory forever…. And the purpose of this removal of the children of God is…that they not partake of her [Babylon’s] judgment. Before the final punishment is inflicted on Babylon, the children of God shall be no more in the world.7

Because Hoeksema identified the battle of Gog and Magog, in Revelation 20, with the battle of Armageddon and because, in his view, the true church will have been taken to heaven before the battle of Armageddon, the object of the attack of Satan’s army, in Revelation 20:7-9, cannot be the true church, but merely nominal Christendom. It is, therefore, either a rare inconsistency on Hoeksema’s part or, what is less likely, some doubtfulness about his own view that accounts for his allowance that the church “will still exist in [the] midst” of the “nominally Christian world” attacked by Gog and Magog and for his statement that when Gog and Magog attack the camp of the saints, that is (on Hoeksema’s view), the nominally Christian nations of the West, “the people of God shall look for the coming redemption, which shall then be very nigh.”8

Already during Hoeksema’s life, this peculiar feature of his eschatology, namely, Christ’s taking of the church out of the earth into heaven some time before His second coming, was challenged. The challenge, courteously framed as questions, put its finger on the obvious weaknesses of Hoeksema’s teaching: “Do you not teach here two future comings of the Lord? Is it your position that there will be no saints upon the earth at the final coming of Christ? Do not certain dispensationalists teach something similar to this in the ‘rapture’ theory?”

In his response, Hoeksema acknowledged that “I have been asked about [this teaching] by more than one before.” Hoeksema was concerned to distinguish his view from the “rapture” doctrine of premillennial dispensationalism. But he resolutely defended his view: “The resurrection of the dead and the change of the living will take place in two stages with the destruction of Gog and Magog in between.”9 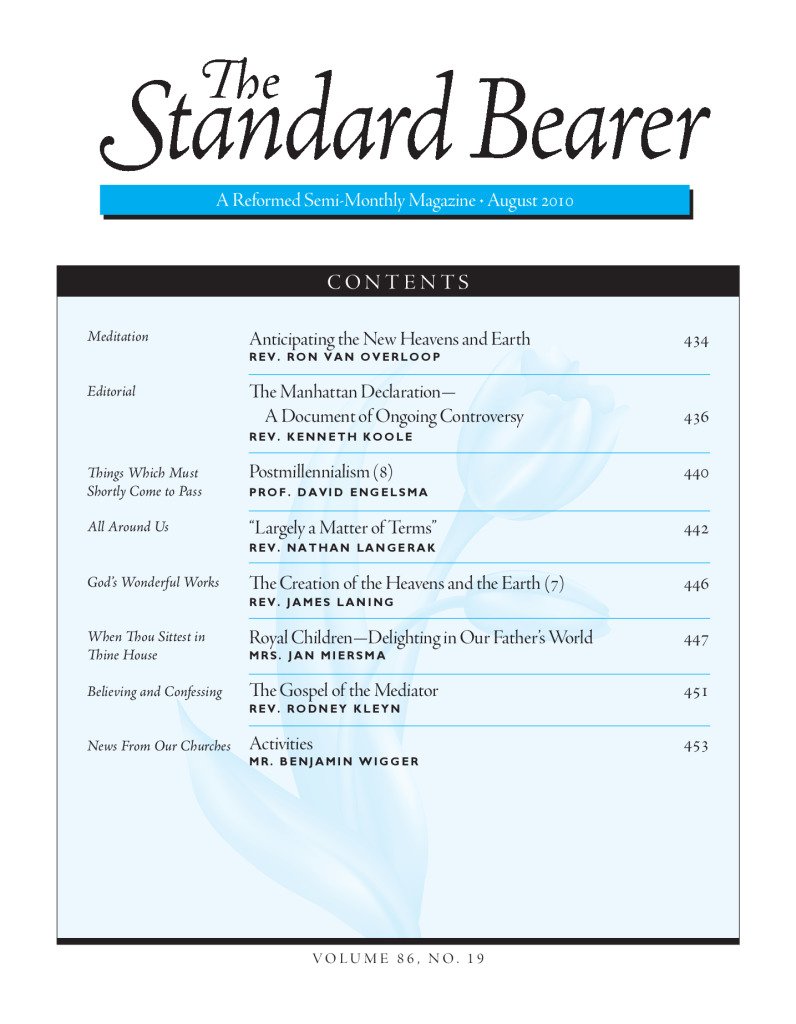