There is absolutely nothing in the Reformed confes­sions that supports, or even suggests, the eschatological doctrine of a coming “golden age” for the church before the second coming of Jesus Christ—a millennium of the earthly victory of the kingdom of Christ.

In light of the importance of such a millennium in the theology of those who advocate the theory, one would expect the creeds to reflect this importance. But there is not a word about it.

On the contrary, the Reformed creeds plainly oppose the doctrine. They oppose postmillennialism, first, in their teaching on the return of Christ. The Heidelberg Catechism directs the hope of the Reformed believer to the second, bodily coming of Jesus Christ.

What comfort is it to thee that Christ shall come again to judge the quick and the dead?

That in all my sorrows and persecutions, with uplifted head, I look for the self-same One who has before offered himself for me to the judgment of God, and removed from me all curse, to come again as Judge from heaven; who shall cast all his and my enemies into everlasting condemnation, but shall take me, with all his chosen ones, to himself, into heavenly joy and glory.1

According to the Catechism, the Reformed Christian’s hope is “heavenly joy and glory,” not at all the earthly joys and glory of a “golden age.”

Article 37 of the Belgic Confession fully agrees with the Catechism. The church has one hope: the “corporal and visible” coming of Christ from heaven. “We expect that great day with a most ardent desire…. Even so, come, Lord Jesus. Rev. 22:20.”2 This hope is not diluted, or misdirected, by an ardent desire for a millennium.

Like the Catechism, the Belgic Confession under­stands Scripture to teach that, all the while she is in the world, the true church is the object of the hatred and opposition of the world of ungodly men and women, including the false church: “the wicked, who most cru­elly persecuted, oppressed, and tormented them in this world.”3 Throughout history, the cause of the true church is “condemned by many judges and magistrates as hereti­cal and impious,” including ecclesiastical judges—synods and theologians.

Postmillennialists object that for one thousand years, at least, and probably for millions of years, the church will rule the world, live in peace, prosperity, and power, and thus be in the position herself to condemn the cause of the world of the ungodly and the cause of the false church as heretical and impious.

A second way in which the Reformed creeds repudiate the false doctrine of postmillennialism is their presenta­tion of the kingdom of God as a spiritual and heavenly kingdom, rather than the earthly, carnal kingdom of post­millennialism.

That the kingdom of God in the world is spiritual and heavenly is the clear, conclusive teaching of the Heidel­berg Catechism.

What is the second petition [of the model prayer]?

Thy kingdom come. That is: so govern us by thy Word and Spirit that we may submit ourselves unto thee al­ways more and more; preserve and increase thy Church; destroy the works of the devil, every power that exalteth itself against thee, and all wicked devices formed against thy holy Word, until the full coming of thy kingdom, wherein thou shalt be all in all.4

The kingdom of God is the reign of God in Jesus Christ in the hearts and lives of elect believers: “Govern us…that we may submit ourselves unto thee always more and more.” The kingdom is not the impressive, external Christian empire envisioned by Christian Reconstruction and by the culture-Calvinists, over all of society.

The kingdom comes progressively by the “Word and Spirit” of Jesus Christ. It does not come by the aggressive activity of postmillennialists to transform and dominate all spheres of human life. Neither does it come by a (spu­rious) common grace of God at work in the reprobate, unbelieving citizens of the kingdom of darkness.

Like Q&A 52 of the Catechism and Article 37 of the Belgic Confession, the Catechism, in Q&A 123, views the kingdom of God as always battling a hostile kingdom of the world of the ungodly, including the false church: “destroy the works of the devil, every power that exalteth itself against thee, and all wicked devices formed against thy holy Word.”

The progressive coming of the kingdom aims at, and ends in, “the full coming of thy kingdom.” This is not the millennial kingdom of postmillennialism, but the king­dom that Christ will establish perfectly in all the new creation at His coming, for only then will God be “all in all” (see I Cor. 15:23-28).

We…condemn Jewish dreams that there will be a golden age on earth before the Day of Judgment, and that the pious, having subdued all their godless enemies, will pos­sess all the kingdoms of the earth. For evangelical truth in Matt., chs. 24 and 25, and Luke, ch. 18, and apostolic teaching in II Thess., ch. 2, and II Tim., chs. 3 and 4, pres­ent something quite different.5

This creedal statement drives a stake through the heart of postmillennialism.

And the Second Helvetic accurately expresses Re­formed thinking on the doctrine of the last things. Schaff (who gives only the Latin original of the creed) calls the Second Helvetic Confession “the most elaborate and most catholic among the Swiss confessions.” He adds that “it was adopted, or at least highly approved, by nearly all the Reformed Churches on the Continent and in England and Scotland.”6

Not only did the Reformed churches in Europe in 1566 have no place for the fantasies of postmillennial­ism but they also rejected postmillennialism as “Jewish dreams.” That is, postmillennialism is the same notion about an earthly, carnal kingdom of God that was the delusion of the Jews, according to John 6, and because of which they rejected the spiritual kingship and kingdom of Jesus Christ. 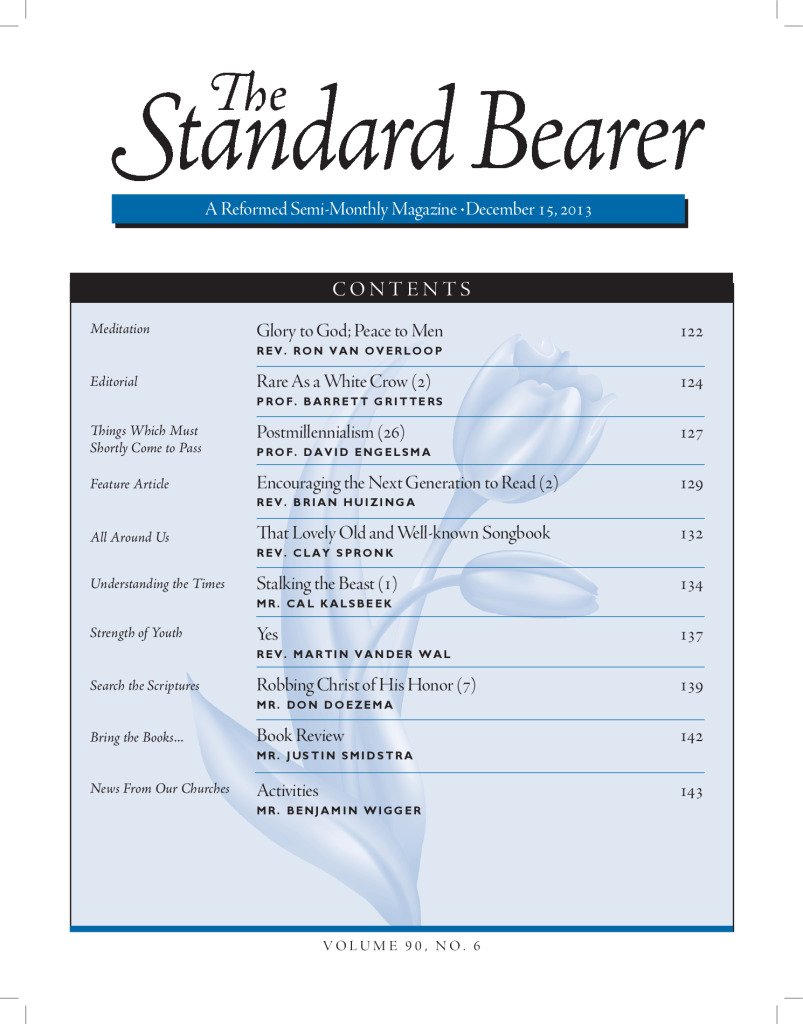