This part of my treatment of postmillennialism consists of a critical examination of the biblical proof put forward by the postmillennialists for their doctrine of the last things.

I have already considered their Old Testament proof: the passages that prophesy future glories for Israel, especially Isaiah 65. I have also considered two of the main New Testament passages upon which post­ millennialism rests its case: Matthew 24 and Romans 11:25, 26.

In the preceding installment in this series, I began a consideration of another important passage in the New Testament for postmillennialism: Revelation 20, the only passage in the Bible that mentions the millen­nium, or period of one thousand years. I presented the interpretation of the passage by the postmillennialists.

In this article, I subject the postmillennial interpreta­tion of Revelation 20 to criticism.

Criticism of the Postmillennial Interpretation of Revelation 20

First, those who reign with Christ during the mil­lennium, according to Revelation 20:4, are those who “were beheaded for the witness of Jesus, and for the word of God.” That is, they are humans who had been killed for Christ’s sake in the world. They are martyrs. Therefore, verse 4 states that these humans are “souls.” Their reigning with Christ on thrones is not bodily. Nor is the place of their reign the earth. Rather, they occupy a position of glory and share somewhat in Christ’s reign in heaven.

Verse 4 clearly describes the intermediate state of elect believers, particularly elect believers who have lost their (earthly) life for Christ’s sake in the world.

If postmillennialism is determined to explain the reigning of the martyrs as taking place on earth in the bodies of these martyrs, it is compelled to teach a bodily resurrection at least of some saints prior to the final resurrection at the second coming of Christ. This brings postmillennialism into conflict with the teaching of Scripture and of the Reformed creeds that there is one resurrection of the dead and that this one resurrection happens at the return of Jesus Christ. “The hour is coming, in the which all that are in the graves shall hear his voice, and shall come forth; they that have done good, unto the resurrection of life; and they that have done evil, unto the resurrection of damnation” (John 5:28, 29). “Then [at the coming of the Lord Christ]…all the dead shall be raised out of the earth, and their souls joined and united with their proper bodies in which they formerly lived” (Bel. Conf., Art. 37).

Not only does the postmillennial interpretation of Revelation 20:4 bring postmillennialism into conflict with the biblical and Reformed doctrine of one resurrection. The interpretation also involves postmillennialism in absurdity. For postmillennial­ism has resurrected, glorified saints, for example Deacon and Evangelist Stephen and church father Polycarp, living and working in a world of sin and death, rubbing shoulders every day with reprobate sinners, in the millennial kingdom. Notwithstanding the carnal prosperity of the world into which they have returned, it must seem to such saints, who have enjoyed the vision of the glory of God, face-to-face communion with Jesus Christ, and the perfection of heaven, that they have been banished to a kind of purgatory, or worse.

To those who teach that resurrected and glorified saints will return to this world of sin and death, in order to reign for a thousand years over continuing earthly life, the appropriate response is that which a Scottish Presbyterian minister once gave to the postmillennial­ists: “Mee thinkes, you speak nonsense.”1

The truth is that perfected, sinless, glorified, heav­enly saints cannot live in a sinful world, in the stream of an earthly life. Nor would God impose such misery and confusion on saints who have, through death, been delivered from this world of sin and death, and trans­formed into heavenly creatures.

The first resurrection of Revelation 20:5, 6, which accounts for the living and reigning of the martyrs with Christ, is Christ’s translation of His own, through physical death, from the death of sinful, earthly life into sinless, heavenly life, in their soul. When the child of God dies, he does not naturally fly off into heaven in his soul. But Christ raises him, in his soul, into the new life of heaven.

For Christ to send those whom He has raised into heavenly life back into earthly life, where death reigns and sin abounds, would be a cruel reversing of their resurrection.

A second feature of Revelation 20 that is devastating of the postmillennial doctrine, if not fatal to it, is that, according to verses 7-9, the millennium is followed by an attack on the kingdom of Christ by Satan and his hordes for a little season.

Apart from postmillennialism’s errors in demanding an earthly victory and a victory within history, the charge of postmillennialism against amillennialism is false. When Jesus Christ returns in the body, with all His mighty angels, “to recompense tribulation to them that trouble” us, “in flaming fire taking vengeance on them that know not God, and that obey not the gospel of our Lord Jesus Christ,” and “to be glorified in his saints” (II Thess. 1:6-10), the kingdom of Satan will by no means be triumphant on earth. It will be in disarray. The Battle of Armageddon will have divided and well-nigh destroyed it (Rev. 16:12-16). By His judgments, God will have demonstrated that Satan could not erect, and maintain, a worldwide kingdom of earthly peace and prosperity. His greatest effort and best attempt at a utopian world-kingdom apart from God in Jesus Christ will have been exposed as a failure.

But Revelation 20, favorite passage of postmillenni­alism, delivers a heavy blow to postmillennialism’s dear doctrine that the kingdom of Christ will have an earthly victory within history. In fact, the blow is twofold.

First, evidently, there are countless enemies of Christ, His kingdom, and His people during the millennium. Outwardly, they yield to the physical power of the saints, who have dominion. Inwardly, they hate the king and His kingdom. Throughout the millennium, they await their chance to revolt, and plot the revolution. If, when the thousand years are expired, Satan marshals humans in all nations to fight the kingdom of Christ, “the number of whom is as the sand of the sea” (Rev. 20:8), all these godless foes of Christ were present dur­ing the millennium. This renders the alleged victory of the kingdom of Christ highly suspect.

And when the thousand years are expired, Satan shall be loosed out of his prison, and shall go out to deceive the nations which are in the four quarters of the earth, God and Magog, to gather them together to battle: the num­ber of whom is as the sand of the sea. And they went up on the breadth of the earth, and compassed the camp of the saints about, and the beloved city (Rev. 20:7-9).

It is doubtful, therefore, that any chapter of Scripture is more telling against postmillennialism, at its very heart, than is Revelation 20.

Recently, a leading proponent of postmillennialism has candidly recognized how troublesome Revelation 20 is for postmillennialism’s message of victory. Martin G. Selbrede has acknowledged the force of the criticism given above, in light of the teaching of Revelation 20 that Satan will be loosed after the millennium to wage war against the kingdom of Christ. Selbrede’s response to the criticism is to deny that there will be any loosing of Satan following the millennium and to affirm that during the millennium every human then living will be converted to Christ, and saved. No enemy of the kingdom of Christ remains.3

Thus, this postmillennial theologian attempts desperately to explain away the plain teaching of Rev­elation 20:7-9 that, following the millennium, Satan launches a worldwide attack on the kingdom of Christ and its citizens. This attempt to solve postmillennial­ism’s problem is an exercise in futility. The passage is too clear.

The only other solution to its problem for postmil­lennialism is the exceedingly painful one of giving up Revelation 20 entirely, as referring to postmillennial­ism’s “golden age.” This was the solution recommended by the Presbyterian postmillennialist B. B. Warfield.4

The Truth of Revelation 20

The millennium of Revelation 20 is the entire new dispensation from Christ’s exaltation, when He bound Satan, to the time just before His second coming.

During all this time, Satan is governed by Jesus Christ so that he cannot deceive the nations, that is, unite them under Antichrist, in order to destroy the true churches of Christ, persecute the saints, and estab­lish the kingdom of the beast worldwide. Were Satan not to be bound, the gathering of the church would be impossible.

Also during this time, the elect saints, particularly the martyrs, are, at their death, resurrected by Christ out of death into heavenly life in their soul. In heaven, they share in the life and glory of the enthroned Jesus Christ. So far from befooling the church in the world with the optimistic message of earthly victory, Revela­tion 20 thus warns the church that throughout history she and her members are objects of the persecuting, killing hatred of the ungodly world. Their encourage­ment and comfort in the face of this hatred are not a future earthly victory, but deliverance at death into the victory of reigning with Christ in heaven.

At the end of the thousand years, Satan is freed from his restricted imprisonment and bondage. This may very well be taking place now. Subject to the will of the Lord Jesus, who frees Satan, as once He bound him, Satan deceives the nations into forming the world-kingdom of Antichrist, which assails the kingdom of Jesus Christ, the true church, her members, and her works. Revelation 11 and Revelation 13 give further description of this last, still future war of Satan on the church.

The last and greatest battle of the church, which is still impending at the beginning of the twenty-first cen­tury, will be won, not by the church herself, but by the power of God, who arises for the defense of His king­dom and its citizens. As so often in the history of the Old Testament church, the victory will be a wonder.

Then follow the second resurrection—the resurrec­tion of the body—and the final judgment.

The end of history, therefore, will be the complete victory of the church with everlasting, beneficial con­sequences. “End,” however, does not refer to the closing moments, or thousand years, of history, but to the goal of history.

The victory will not be the accomplishment of the heroic efforts of the saints, but a wonder of the grace of God in Jesus Christ. Jesus personally will conquer, con­suming the Lawless One—the personal Antichrist—with the spirit of His mouth, destroying him with the brightness of His coming (II Thess. 2:8), and “taking vengeance on them that know not God, and that obey not the gospel” (II Thess. 1:8).

Everlastingly, for all those “found written in the book of life” (Rev. 20:15), the benefit will be life in the new heaven and the new earth (Rev. 21:1), where are neither death, nor sorrow, nor sin, nor sinners, but perfect fel­lowship with God in Jesus Christ (Rev. 21, 22).

This, this is the hope of the church and the saints.

This, this is the victory of the kingdom of Jesus Christ.

1 Alexander Petrie, in 1644, with specific reference to Puritans at the Westminster Assembly. With reference to postmillennial­ism, Petrie added: “old erroures are lyke old whoores, that is, the more to be abhorred.” Quoted in Crawford Gribben, The Puri­tan Millennium: Literature & Theology 1550-1682 (Dublin: Four Courts Press, 2000), 53.

4 See B. B. Warfield, “The Millennium and the Apocalypse,” in Biblical Doctrines (New York and London: Oxford Univer­sity Press, 1929), 641-664. “The millennium of the Apocalypse [Revelation 20] is the blessedness of the saints who have 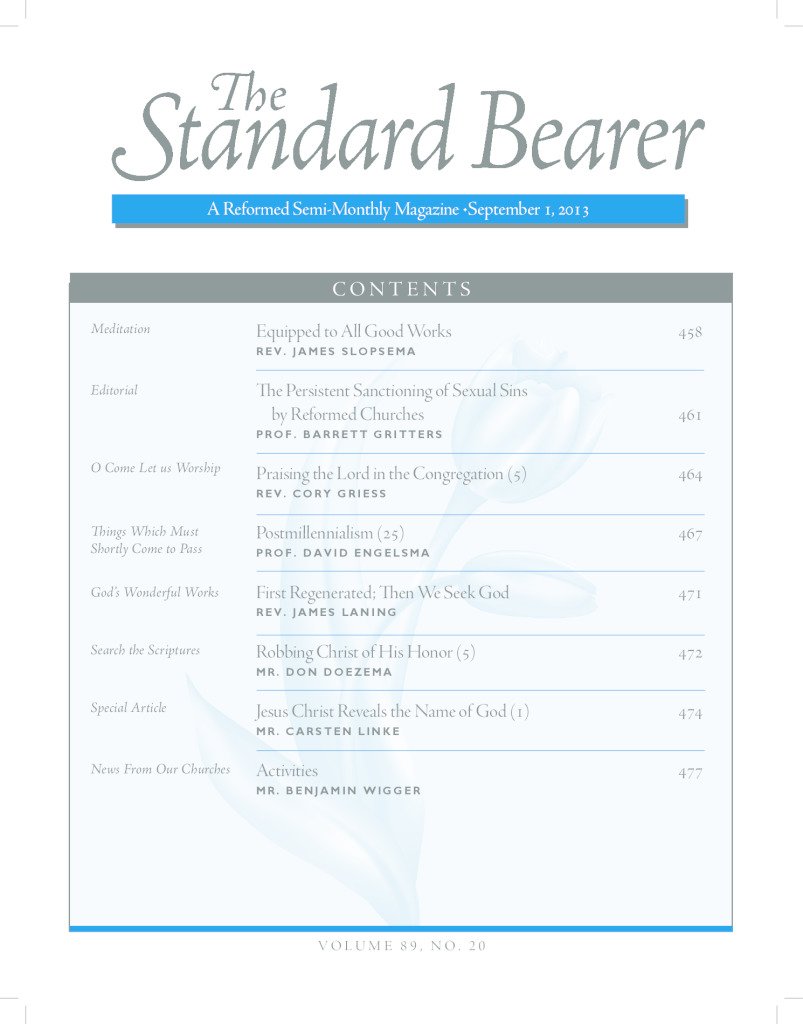