For a creedal, biblical critique of postmillennialism as it has appeared in the Reformed tradition, it is necessary that we recognize the fundamental elements of this doctrine of the last things.

An Earthly Victory within History

At the heart of postmillennialism is the conviction and desire that there will be an earthly realization of the victory promised by the gospel to the kingdom of Christ. The Messianic kingdom will enjoy an earthly triumph within history. There must be a “golden age” for the church before history ends with the coming of Christ. At the very least, Christians must someday outnumber non-Christians. The nations of the world must come under the influence of the gospel and law of God in such a way that they become “Christianized,” socially, culturally, and politically. The church must have earthly dominion.

Postmillennialist David Chilton regarded the earthly victory of the church as the main element of postmillennial eschatology and the central issue in the controversy over the truth of the last things.

The eschatological issue centers on one fundamental point: Will the gospel succeed in its mission, or not? Regardless of their numerous individual differences, the various defeatist schools of thought are solidly lined up together on one major point: The gospel of Jesus Christ will fail. Christianity will not be successful in its worldwide task. Christ’s Great Commission to disciple the nations will not be carried out. Satan and the forces of Antichrist will prevail in history, overcoming the Church and virtually wiping it out—until Christ returns at the last moment, like the cavalry in B-grade westerns, to rescue the ragged little band of survivors.²

North and Chilton are Christian Reconstructionists. But non-Reconstructionist postmillennialists agree that the gospel demands the earthly victory of the church within history. Presbyterian J. Marcellus Kik has written:

“Postmillennialism,” exclaimed Loraine Boettner, “does not despair of the power of the Gospel to convert the world, but holds rather that it cannot be defeated, that over the centuries it will win its way, and that eventually the goal will be achieved.”4 The goal Boettner had in view is the “Christianizing” of all the nations of the world by the dominant influence of the Christian religion for a thousand years.

K.H. Miskotte expressed this theme of postmillennialism this way: “History’s fulfillment must be within history, in order to reveal the glory of the Lord as widely as possible.”5

The charge of postmillennialists against amillennialism is that it is defeatist and pessimistic. Amillennialism’s doctrines of a great apostasy, of the increase of lawlessness, and of the rise of Antichrist in the last days are, in reality, a message of the defeat and shame of King Jesus.

Amillennialism…[is] in retreat from the world and blasphemously surrender[s] it to the devil. By its very premise… that the world will only get worse…it cuts the nerve of Christian action…. If we hold that the world can only get worse…what impetus is left for applying the word of God to the problems of this world? The result is an inevitable one:…amillennial believers who profess faith in the whole word of God…are also the most impotent segment of American society, with the least impact on American life. To turn the world-conquering word of the sovereign, omnipotent, and triune God into a symbol of impotence is not a mark of faith. It is blasphemy.6

The earthly victory of the church within history is of the greatest practical importance for postmillennialism. Only the prospect of this “success” motivates the church and the believer to zealous Christian activity. In postmillennialism’s promise of earthly victory is found the incentive for the church to preach the gospel, especially in the work of missions; to teach her members and the human race the law of God; and, in the end, to make human society Christian.

The Puritans saw, and their doctrinal descendants still see, the postmillennial hope of the conversion of large numbers of converts, perhaps a majority of the human race, as the incentive for missions. “The hope [of the Puritans and their disciples] for the [postmillennial] latter days was the compelling motive behind Anglo-American missions.”7 It is the theme of Iain H. Murray’s The Puritan Hope that the expectation of the conversion of multitudes in a coming “golden age” was the driving force of the mission zeal of the Puritans and their disciples and that only this “Puritan hope” will energize the church today.8

Post millennialism’s hope of a “Christianizing” of the nations is also the incentive for the believer to carry out his Christian calling in the world. Without the promise and hope of postmillennialism that the efforts of Christians will be successful in forming a Christian world, at least externally, charge the postmillennialists, the church and Christians become lethargic and impotent. Only belief of a “millennium or a triumph of Christ and His Kingdom in history,” wrote Rushdoony, will motivate Christians “to conquer the world and to assert the ‘Crown Rights of King Jesus.'”9

It is by no means only the Christian Reconstructionists who make the outward, earthly, visible, sensibly impressive success of the word of God in history the main motivation of the Christian’s zealous conduct in the world. Despite his acknowledgment of the hope of the second coming of Christ—an acknowledgment that is largely defensive—Iain Murray exhorts the “Puritan hope,” that is, postmillennialism’s “golden age” and the great revival that will usher it in, as the motivation for diligent Christian activity that will positively influence culture. Murray suggests that the main reason for “the loss of national purpose, the loss of will to advance, the indiscipline and futility of permissiveness” of our day is the “pessimism” that results from the church’s failure to hold and proclaim the “Puritan hope.”10 The title of the concluding chapter of The Puritan Hope is “The Prospect in History: Christ Our Hope.” The preposition says it all.

Not the hope of the second coming of Christ as the end of history with its blessings and glory for the church and the elect child of God—the biblical hope—but the hope of a millennium within history—the Puritan hope—is the main incentive of the church’s activity and of the Christian life.

Conversion of the Jews

Although, in fact, all the prophecies of the Old Testament concerning a glorious future for Israel as the Messianic kingdom of God contribute to this expectation, postmillennialism’s hope for the Jews rests mainly on Romans 11:1-32. Particularly, Romans 11:25, 26 is the basis: “Blindness in part is happened to Israel, until the fullness of the Gentiles be come in. And so all Israel shall be saved.” Postmillennialism, whether Puritan, Presbyterian, Reformed, or Christian Reconstruction, reads the passage as though the word “so” in verse twenty-six were “then” and understands “Israel” in verse twenty-six as physical Jews.

Based on its interpretation of Romans 11:25, 26, post millennialism teaches that sometime in the future, when God has brought the fullness of the Gentiles to salvation, He will then convert a large number, perhaps the majority, of physical Jews. Some, with “unbounded optimism,” expect the conversion of every living Jew. And “then” (as postmillennialists interpret “so” in verse twenty-six) all Israel, that is, all the Jews (as postmillennialists understand “Israel” in verse twenty-six), will be saved. This salvation of all Israel will be the beginning of the coming great revival. Then, postmillennialists add, the revival will continue in the saving of multitudes of Gentiles among all nations. Thus will be brought about the “Christianizing” of the whole world and the “golden age.”

Jonathan Edwards expressed the Puritan conception of the national conversion of the Jews and its importance for postmillennialism.

The Jews in all their dispersions shall cast away their old infidelity…and shall flow together to the blessed Jesus… and shall…declare his praises unto other nations. Nothing is more certainly foretold than this national conversion of the Jews in the 11th chapter of Romans…. Though we do not know the time in which this conversion of the nation of Israel will come to pass; yet thus much we may determine by scripture, that it will be before the glory of the Gentile part of the church shall be fully accomplished.11

contains a prophecy that someday in the future the Jewish people en masse will receive Jesus Christ as their Messiah and enter into the Christian Church. This conversion of the Jews will be accompanied with, and result in, the Spiritual resurrection and reconciliation of the whole world to Christ—global revival and reformation—the Christianization of the earth.12

The future conversion of large numbers of physical Jews is of fundamental importance to postmillennialism because this is the one prophecy of Scripture (as postmillennialists read Scripture) that clearly foretells brighter days ahead in history for the church. If the church can look forward to a mass, even national, conversion of Jews in the future, why can she not also expect the mass conversion of all nations? and the “Christianizing” of the entire world? and the church’s (or, Christian Reconstruction’s) dominion over all the life of all nations? and a “golden age” of a thousand years, or hundreds of thousands of years, of earthly peace and prosperity?

Against all the overwhelming testimony of the New Testament to dark days of lawlessness, apostasy, Antichrist, and tribulation for the church in the last days; against all the plain teaching of Scripture that both under the old covenant and under the new covenant the church is always a remnant and a little flock; against all the evidence of two thousand years of new covenant history that it pleases the Lord Christ to establish, maintain, and expand His kingdom in true churches and in faithful saints, with their children, who live in antithethical opposition to a world that lies in darkness (whose god is Satan); against the unanimous witness of the Reformed confessions that the kingdom of Christ will be perfected and the fighting Christian will reign with Christ over all creatures only “hereafter,” that is, at and by the second coming of Christ13—against all of this, a wonderful conversion of masses of Jews in the future is the biblical wedge (so reason the postmillennialists) by which the optimism of postmillennialism may be introduced into the eschatological thinking of the church.

And thus may be driven out of the church’s thinking the debilitating pessimism and defeatism of “blasphemous” amillennialism—the pessimism and defeatism of the testimony of the New Testament to dark days; of the scriptural teaching of the remnant; of the evidence of history that the kingdom of Christ is always a spiritual, opposed, and battling kingdom, arrayed to the very end against the hordes of Satan (Rev. 20:7-9); and of the Reformed confessions, which direct the hope of church and believer to the coming of Christ, the resurrection of the body, the vindication and reward of the final judgment, and the everlasting reign of the saints over all creatures in a new world.

8 Iain H. Murray, The Puritan Hope: A Study in Revival and the Interpretation of Prophecy (Edinburgh: Banner of Truth, 1971).

12 Joe Morecraft III, “The Triumph of Christ’s Kingdom in History: The Victory Orientation of the Futurereview (sic) of the Bible and the Westminster Standards,” New Southern Presbyterian Review 2, no. 2 (Fall 2004): 94.

13 “…until the full coming of thy kingdom, wherein thou shalt be all in all”; “…with free conscience fight against sin and the devil in this life, and hereafter, in eternity, reign with him over all creatures” (Heidelberg Catechism, Questions 123, 32, in Philip Schaff, Creeds of Christendom, vol. 3, Grand Rapids: Baker, 1966, 352, 353, 318; emphasis added). 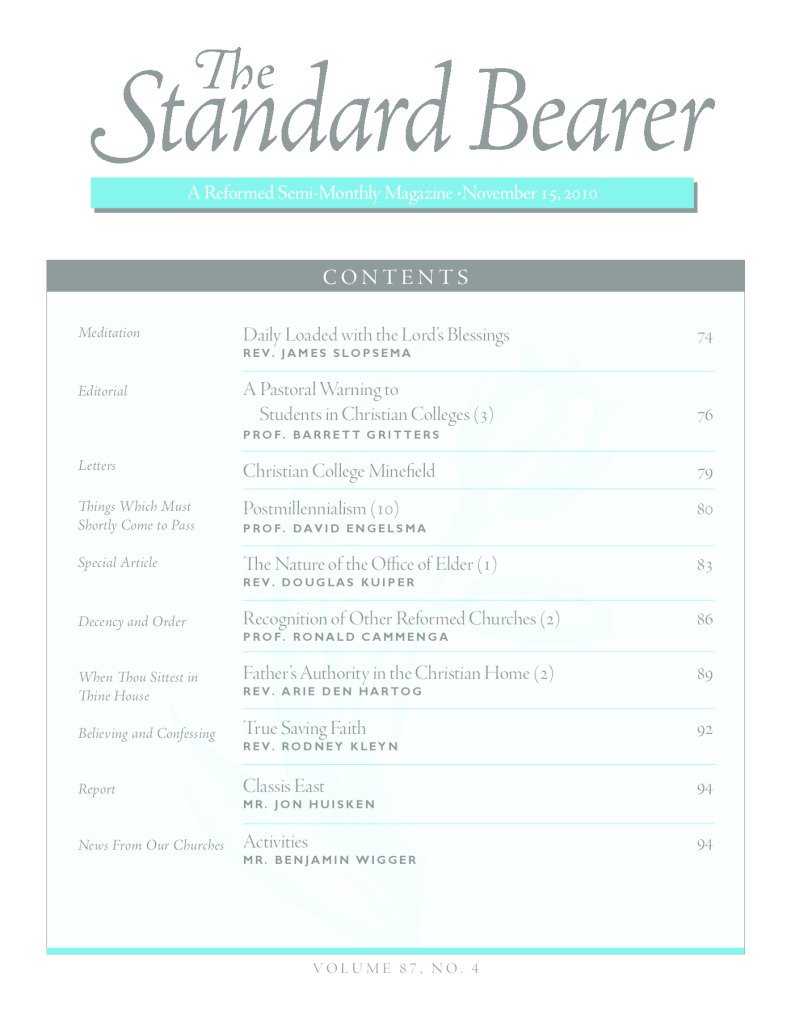