The late Homer Hoeksema was professor of Dogmatics and Old Testament in the Protestant Reformed Seminary.

God’s Creation of the Heavenly Luminaries

The next question to be considered is: for what purpose did God create the heavenly luminaries?

Moreover, in this same connection we may note that these lights serve to measure off time. Not only do they divide between day and night; but also seasons and days and years, according to the text, are measured according to these light-bearers. Also here, of course, there is no conflict with the first part of Genesis 1. Time is not created on the fourth day. Time, with all that it implies, is created with the very beginning of the heaven and the earth and belongs to the very increated nature of the creature. But the measurement of time is fixed and ordered in connection with the heavenly lights. The days and the years are measured off by the relation of the sun to the earth, the month by the relation of the moon and the earth. Minutes and hours and days and months and years—time in its minute division—were ordered by the creative work of the fourth day.

In the third place, the Scriptures inform us that these lights are for “seasons.” The reference here is hardly to the four seasons of the year. In the first place, the general meaning of the word is that of set, or appointed, times, including hours and days and months and years. Besides, it is not at all impossible that the seasons as we know them were not known in the world before the Flood, but rather originated at the time of the Flood. It is after the Flood that we read of God’s word to Noah: “While the earth remaineth, seed time and harvest, and cold and heat, and summer and winter, and day and night shall not cease.” If this view is correct, then we also have another glimpse of the nature of the catastrophe of the Flood. For this would mean that the earth was tilted on its axis, thus bringing about our seasons, through the Flood. However this may be, the reference is to the various appointed times, the different periods determining and regulating the life of the creatures and the cycle of their life, such as the time for sowing and for harvesting, the time for the breeding of animals, time for growth and for dormancy, the time for the migration of the birds and for the hibernation of the beasts of the forest, and so forth. We must always remember that all these aspects of the life of God’s creatures are not a matter of some ill-defined and vague instinct, but are a matter of their creation and of divine regulation and ordering.

Further, the Scriptures speak of the greater light ruling the day and the lesser light ruling the night. This ruling is, of course, not to be understood in the heathen sense of the word. They soon conceived of the heavenly bodies as being animated and as gods; and they worshiped the host of heaven—something against which God’s people are repeatedly warned in Scripture. They worship the host of heaven as ruling not only over day and night, but over man. This is the folly of sin, and it is the perversion of God’s ordinances. For it was iprecisely in the foolishness of sin, according to Romans 1, and under the revelation of the wrath of God from heaven, that they changed the glory of the incorruptible God into an image made like unto the corruptible creature. They changed the truth of God into a lie, and worshiped and served the creature rather than the Creator (Rom. 1:18-25). But the meaning is that creation is governed through the influence of sun and moon. The sun by day controls the atmosphere, gathers the rain in clouds and disperses them. It controls the wind and the storms, it quickens the seed in the earth, produces life and light and joy, and rules over the period of labor and toil for man and for beast. In this sense the sun is divinely appointed to govern the day. The moon with its weaker and borrowed light rules the night. This is not only to be understood figuratively, as pointing to the fact that the moon is the chief light in our night, even as the sun is the light of our day. But also the moon has its influence in the creation, determining, for example, the ebb and flood of the tides in the oceans. Also the moon, therefore, keeping watch in the silence of the night, has its function of rule, together with the sun. In fact, as its powers of investigation increase, science discovers more and more of the details of this rule which was ordered in the creation on the fourth day.

Finally, Scripture speaks in this connection of “signs.” Again, these signs are not to be understood in the sense of the superstitions of astrology, so that by the stars and their constellations future events in the history of mankind may be foretold. This is nothing but a perversion of these God-instituted signs which arises out of the corruption of man’s totally depraved nature. But, in the first place, the reference here is to natural signs. It is in connection with the heavenly bodies that the four quarters of the compass are determined. They are signs for direction and navigation. Signs there are, too, of the weather—something to which the Lord Jesus alludes in emphasizing the Pharisees’ ignorance of the signs of the times.

But especially does Scripture point us to the fact that the lights in the firmament are signs in the spiritual sense of the word. In the first place, quite in general, these works of God’s hand, according to many passages of Scripture, though they have no gift of speech, nevertheless utter a powerful language concerning God’s power and wisdom. This we have already mentioned in connection with Psalms 8 and 19 and 136. In the book of Job one will find many similar references to the stars and their constellations. In the second place, Scripture points us to the fact that at the end of the world there will be special signs in the sun and in the moon and in the stars—signs that are fearful and terrifying to the wicked, but signs of the final coming of our Lord Jesus Christ in glory. In the third place, Scripture points us to this truth also with respect to the sun and moon and stars, namely, that God, having before determined that all things should be united in Christ, made of the temporal a picture of the eternal, of the natural a symbol of the spiritual.

To this Scripture points very often. Let us note only a few of the many references. In Psalm 84:11 we read: “For the Lord God is a sun and shield: the Lord will give grace and glory: no good thing will he withhold from them that walk uprightly.” Malachi 4:2 prophesies that “the Sun of righteousness shall arise with healing in his wings.” The Lord Jesus tells us in Matthew 13:43 that “the righteous shall shine forth as the sun in the kingdom of their Father.” According to Isaiah 60:19, 20, the sun and moon are descriptive of the church’s glory. Very often Scripture points to the stars as spiritual signs, and symbols. In their multitude the stars are a sign of the multitude of Israel’s seed, the church. To mention no more, in the book of Revelation the angels of the seven churches are pictured under the symbolism of the seven stars in the right hand of Christ. The Lord Jesus Himself is called the bright and morning star.

Thus, in the light of Scripture, in the light of Christ, there is rich gospel in the firmament with its heavenly lights. God is the Sun, the Light of lights, the sole fount of all goodness and glory. In His light of righteousness and holiness do we see the light. His people are light, but only as they receive their light from Him and reflect it, through our Lord Jesus Christ. They are not light in themselves, but only reflect the light, and that, too, only in continual communion with God, who is light and life in Himself. All of this has its unity in Christ Jesus; the Sun of righteousness, the bright and morning star. Through Him we receive the light of eternal life from God.

Thus conceived, there is also clear prophecy here. In Paradise the first, the night of death fell over us. But the Sun of righteousness has arisen in Christ Jesus. Through Him the light has dawned in our hearts, the light of the eternal day. To that eternal day, in which there shall be no night and in which the light of God shall fill the city of God, all things point, and all the signs in the firmament of the heavens remind us of it. Even the silvery moon in the silence of the night is a reminder of the presence of the sun and thus a reminder of the faithfulness of our God, a reminder that though we are surrounded by the darkness, yet we are not without light, the light of His Word, and that ere long the day shall dawn, the eternal morning, when we shall see face to face. 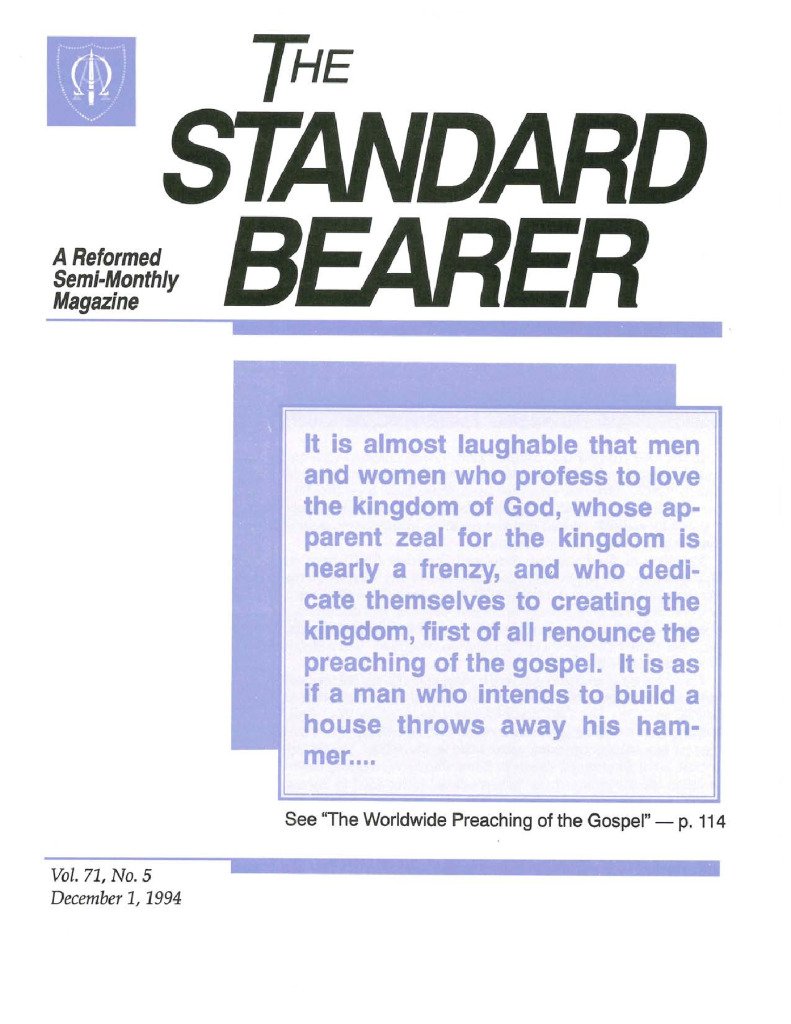