Caught on the Horns of a Dilemma

Caught on the Horns of a Dilemma

The Reformed Guardian of September 10, 1959 presents an editorial written by the Rev. Edward Knott under the title “Observations.”

Reviewing the present situation of the churches that left us in the schism of 1953, Rev. Knott, as we see it, observes that his churches are really caught on the horns of a dilemma.

To put the dilemma into figurative language, Knott sees his churches being chased to death by a furious bull which has deadly power in each of his two horns, and Knott’s churches must choose which horn they desire shall strike the final blow. The dilemma is this: On the one hand, there is the danger of joining the Christian Reformed Church which will mean that they will lose their historic basis on which the Protestant Reformed Churches have stood from their inception in 1924. On the other, there is the danger of continuing a separate existence, resulting in a slow death and/or failing to realize their ecumenical calling. And our observation of Knott’s “Observations” is that he wants his churches to take their time in choosing which horn they wish to be impaled on.

The four observations that Rev. Knott makes are briefly the following:

1. “It should be clearly understood and emphatically stated that officially our doctrinal position as churches has not changed.” By doctrinal position he refers to the “Acts of Agreement” adopted by the Protestant Reformed Churches in 1924 which in part express the following basis: “That we adopt as our common basis the Three Forms of Unity and the Church Order of the Reformed Churches.” Knott maintains that this position and basis has not changed. He admits, of course, that the committee of contact with the Christian Reformed Church has proposed “radical change in that position” and that if their Synod had adopted the proposed change his churches would have “abrogated their position.” But he points out that to the present day at least his churches have not yet adopted the proposed change. So they are officially still on the basis of 1924.

He insists that “this particular element cannot be ignored or forgotten. It places the churches in a very specific position in their relation to and attitude over against every other church. Perhaps it can be said this way: The Protestant Reformed Churches historically have stood, and still stand on the Scriptural and Confessional teaching of the free, sovereign, irresistible grace of God, and have refused to be bound and still refuse to be bound to any synodical decision which alters or abridges that position (reference is, of course, to the action of the Synod with respect to the Declaration of Principles which previously had been adopted). This is the conviction of the Protestant Reformed Churches today.”

Here Knott forgets or purposely fails to reveal that the Declaration of Principles which his churches have rescinded is exactly a confirmation of the basis on which he purports to stand with his churches. Moreover, he also forgets or purposely fails to reveal that his churches have sustained the conditional theology of De Wolf which neither he nor anyone else can find in the basis of the Protestant Reformed Churches. We maintain that by the sustaining of the theology of De Wolf and the rescinding of the Declaration of Principles they have clearly given evidence of having been removed from the original basis.

2: “In the second place, we would observe that we, too, desire to be obedient to the call for unity . . . the unity of all those who confess the Name of the Lord Jesus in truth. But we are also convinced that we may not be so enamored of unity that we ignore, or are careless in the achieving of that unity in the proper way: unity cannot be gained in the way of crisis.”

At this point Rev. Knott comments on the writing of Rev. M. Gritters in The Guardian of June, 1959, where he also pleads for unity. Knott observes that “Rev. Gritters speaks of separations caused by sin and the efforts made to build bridges ‘platformed by Truth and Creed’, but he does not tell us how these bridges shall be built. Building bridges calls for a careful examination of the terrain and crevasse which must be spanned in order that when a unity is achieved between that which has been separated, it may be enduring and permanent. And between two denominations which have a history of separation, unity, even though it is recognized as being enjoined and desirable, cannot be reached or realized if it is not the result of a recognition of each other’s doctrinal position and a mutual desire to unite in the framework of the Word of God and the Confessions. And within that framework allowances must be made for differences of opinion and interpretation in the conviction that both desire to be true to the Reformed heritage.

“And in our present consideration of the results of our discussions with the Christian Reformed Church these things must be kept in mind. True unity cannot be achieved by ‘concessions’, or by simple conformity to the position of the larger denomination, to which basic objections have been raised through the years of our separate existence, and are still being raised. It is desirable that we discuss the issues which separated us and that we find the largest possible common ground between us. It is gratifying that we recognize each other as ‘church.’ But that does not necessarily predicate, nor allow, organic union. There are still important areas of difference between us, and although these differences need not be exclusive, they have been in the past, and continue to be, when agreement to the statement of these differences, either objectively or in reformation, becomes a condition for membership. And then, to our mind, external unity is not more important than the freedom of one’s conscience before God.”

We make two remarks on the above quotation. The first is, that Knott’ speaks a different language than others of his colleagues who have already returned to the Christian Reformed Church or have expressed their readiness to return. Knott, it appears, wants to go back in the history and remove all that has been the cause for separation, and if this is impossible he would rather sacrifice unity and keep a free conscience. This is commendable. But, in the second place, does not Rev. Knott realize that this will mean rehearsal of past history, and did not the Christian Reformed Church tell us they are not interested in such rehearsal?

3. “In the third place, we would observe, that whatever the way, we must continue to act like and conduct ourselves as a church.”

Here Rev. Knott takes some of the members of his group, including some of the ministers, to task for their “indifferent” and “lackadaisical” attitude respecting the future of their churches. He observes that “it would sometime appear that there will be a termination of our denominational life simply by default.”

He points up that there are several reasons why his group does not and should not need to fold up. There are evidences of real spiritual life in the churches. There is a proper and healthy balance in the preaching . . . There is a sense of need of preserving that balance by obtaining a full-fledged seminary of their own . . . There is the expanding missionary witness. Knott insists that these are indications of life, and he continues, “A living body does not ask whether it is alive, or whether it has the right to be alive. It conducts itself as the living organism that it is.”

We remark that this last statement taken by itself may be very well true. But it is also true that when a living body has in it the seed of death it is only natural to ask how long it will be before death overcomes the living body. Rev. Knott tells us that there are those in his group that see signs of death for the organism. It seems to me that if there really are signs Rev. Knott had better reckon with them and not imagine that in spite of the signs of death, he and his churches are going on forever.

Moreover, it may be commendable that the group of churches Rev. Knott represents feels the need of a seminary of their own. But surely what they have now or hope to have in the future cannot give his people any basis for a happier attitude than those Rev. Knott describes above who are indifferent and lackadaisical. And the missionary witness of which he speaks fails in our estimation to give any ground for hoping for a continued existence. It is not difficult to understand that a majority of his people could believe that this kind of missionary witness would have considerably more potency if it was joined with a larger denomination with greater means at its disposal.

4. “Finally, we would observe that although there are many apparent reasons for disappointment, we must not allow gloom and despair to overcome us. The church is not measured by Quantity. Usually, we know, it is evaluated on the basis of numbers. We like statistics, especially when they are favorable and show increases, but become uneasy and discouraged when the reverse is true.

“But regardless of statistics, history cannot be ignored. Our responsibility as ministers of the Word may not be denied. Societies may die, organizations may cease to exist, but the life of the church does not, and may not come to an end as we put a point at the end of a sentence. Nor may we simply terminate the existence of the Protestant Reformed Churches in a moment of time. Mergers are not made in a day, nor must they be hurried or forced. And until there is plainly and convincingly no longer any necessity for a separate existence, we must continue separately . . . not because we desire or long for separate existence, but because there is no other way.

“It is almost insulting to say these things to the church of Jesus Christ that lives out of her Head . . . but we must by all means recognize our calling. Ecumenicity is not possible for a church that is not a church . . . unity with another denomination cannot be achieved by a church that has no life, neither is it desirable without convictions. Only as we are alive, vigorous, stable, active can we conduct the affairs of the church in a proper ecclesiastical manner.”

We would say in conclusion, that though we did not quote all of the editorial we did nevertheless give the gist of it. Sufficient evidence is here given that Rev. Knott sensed a spirit of defeatism in his group and he tried with his editorial to overcome it. Whether he succeeded time only will tell. Personally, we think he failed. At least this much is clear, he also is in favor of returning to the Christian Reformed Church. Only he wants to take his time in doing so. It also becomes apparent from the editorial that Rev. Knott perceives his churches are caught on the horns of a dilemma. 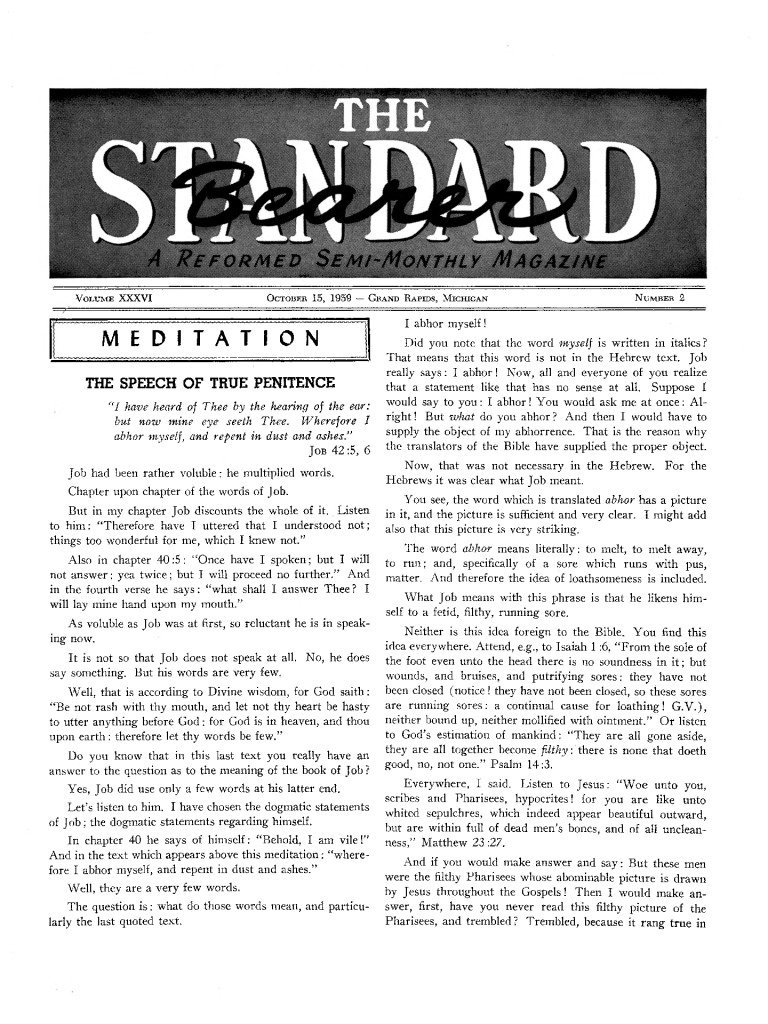