In the last article (September 1, 1999) I introduced our readers to John Cassianus and Faustus of Riez. These were the two men who, while Augustine was still living, made serious objections to Augustine’s views. They did not like Augustine’s sharp and unequivocal defense of sovereign grace rooted in eternal predestination.

Three remarks are necessary before I spell out the specific views of these two men.

In the first place, these men did not write personally to Augustine and express disagreement with his position. They attacked him in the churches in France where they worked. They not only taught views directly opposite those of Augustine, but they repudiated what Augustine taught and condemned his doctrine by name. This was not honest on their part, even though no official stand had been taken on these issues by the church.

In the third place, one must not conclude from what I have written about John Cassianus and Faustus of Riez that these men were Pelagians. They were not. They attacked Pelagianism with just as much vehemence as they attacked Augustine’s views. They condemned Pelagius as strongly as they condemned Augustine. They proposed a “middle way.” They had the solution to what seemed to be a knotty problem, reconciling Augustine’s radical position with Pelagius’ equally radical views. They rejected a bit of both and came up with a bit of both. That middle way they recommended to the church.

This urging to adopt a middle way has led to a strange controversy over names that has attracted the attention of some historians. Some people want to call the views of Cassianus and Faustus “Semi-Augustinianism.” They do this to underscore that some parts of Augustine’s position were accepted by these men. But others insist that these men ought to be called “Semi-Pelagians.” The idea is that they tipped towards Pelagianism more than towards Augustinianism.

We call these men Semi-Pelagians. But let it be understood, this is for purposes of identification only. In the doctrine of sovereign grace there is no half-way position. One is either for or against — for or against Augustine; for or against Christ. There are no Semi-Christians, Semi-Reformed, Semi-Calvinists, Semi-Arminians, Semi-Protestant Reformed. Our fathers at Dordt called the Arminians (teachers of a modified Semi-Pelagianism) Pelagians who were resurrecting the errors of Pelagius from hell. That kind of language is not a “semi”-condemnation.

The Views of the Semi-Pelagians

Cassianus and Faustus attacked predestination, and particularly reprobation. They had several objections. (The reader ought to note the similarity between these objections and ones brought today against the same truth.)

In the first place, they argued that predestination did not do justice to human responsibility. These two gentlemen, who hated predestination, claimed that there was contradiction in Scripture between man’s responsibility, which was rooted in the freedom of the will, and God’s sovereignty. Faustus wrote:

If you pay careful attention, you will recognize clearly and abundantly how through the pages of the Scriptures sometimes it is the power of grace and at other times it is the assent of the human will that is asserted.

It is interesting that, in connection with this question of human responsibility, one of the main objections to Augustine’s teachings was that Augustine’s view denied the invitation of Christ in the gospel, which invitation necessarily implies the desire of God to save all men.

In the second place, Augustine’s views were branded as fatalism in the heathen sense. His view was interpreted to mean that “by God’s predestination men are compelled to sin and are driven to death by a sort of fatal necessity.” Thus the doctrine of predestination was characterized as nothing short of heathen worship of Fate. One is struck by the fact that the Arminians accused the fathers at Dordt of the same sin (cf. Conclusion to the Canons).

In the third place, especially Cassianus brought up some other objections, which included a charge that Augustine made the baptism of the reprobate of none effect, since the reprobate were predestined to destruction. He argued that evangelism became a useless endeavor if predestination was true. (“The PRC cannot do mission work.”) He claimed that the call to repentance became meaningless in Augustine’s view, because a true call implied both divine grace and human freedom. (If Cassianus had known the term hyper-Calvinist, he would have used it against Augustine.) Even prayer becomes useless if predestination is true, because man then becomes “unfeeling and inept material that has to be moved from one place to another.” And predestination destroys all morality because it instills in man a spirit of disregard for God’s law; that is, it makes men careless and profane.

How wearyingly familiar it all sounds.

Even the texts, the so-called universalistic texts, appealed to today were already quoted against Augustine back in the fifth century. I mention only two here because it is important to quote Augustine’s answer to these men who appealed to such texts in support of their position. I refer to I Timothy 2:4 and Matthew 23:37. The readers can look them up. They are familiar.

In short, these men believed that, though man was born depraved, some remnants of good remained in him. These remnants were strengthened by baptism, which restored a free will in man. The result was that man was not dead but very sick. The healing of his sickness lay in calling the great physician. Christ could heal. But Christ would not heal except the sinner call for Him, for Christ would heal no man against his will. In the healing process, the sick sinner cooperated with the physician, sometimes Christ taking the initiative, sometimes the sinner. But Christ would save only those who called upon Him to come to their aid, because Christ died for all men and desired that all men be saved. Yes, already then the doctrine of particular atonement was at stake.

The whole thing was a modification of the crass views of Pelagius, but it was only an attempt to dress up a terribly ugly heresy in a more attractive suit of clothes.

I said earlier that Augustine sharpened his views on sovereign grace and predestination in his battle with Semi-Pelagianism. He wrote two extremely important books at this time — books which anyone interested in the truth of sovereign grace ought to read. One was “A Treatise on the Predestination of the Saints,” and the other, “A Treatise on the Gift of Perseverance.”

This is not the time or the place to go into detail on Augustine’s views. I want to make two quotes from Augustine, one on I Timothy 2:4, and the other on Matthew 23:37. They are both taken from Augustine’s book Enchiridion, and both are enlightening.

The first one is Augustine’s comments on Matthew 23:37.

But even though she (Jerusalem) was unwilling, He gathered together as many of her children as He wished: for He does not will some things and do them, and will others and do them not, but “He hath done all that He pleased in heaven and on earth.”

On I Timothy 2:4 Augustine writes:

… But that we are to understand by ‘all men’ the human race in all its varieties of rank and circumstances, — kings, subjects; noble, plebeian, high, low, learned, and unlearned; the sound in body, the feeble, the clever, the dull, the foolish, the rich, the poor, and those of middling circumstances; males, females, infants, boys, youths; young, middle-aged, and old men; of every tongue, of every fashion, of all arts, of all professions, with all the innumerable differences of will and conscience, and whatever else there is that makes a distinction among men.

We are not compelled to believe that the omnipotent God has willed anything to be done which was not done: for setting aside all ambiguities, if “He hath done all that He pleased in heaven and in earth,” as the Psalmist sings of Him, He certainly did not will to do anything that He hath not done.

No one can be in any doubt but that Augustine would have repudiated any notion of the well-meant offer of the gospel. It was being taught in his time by Cassianus and Faustus. Augustine wanted no part of it.

After Augustine’s death the controversy continued, although Augustine had few supporters. Most of the debate concerned various modifications of the views of Cassianus and Faustus. The differences of opinion in Gaul were sufficiently great to warrant the calling of a synod. This synod became known as the synod of Orange.

The synod, in itself, was a meeting of very minor importance. It was attended by only thirteen or fourteen bishops. It was a local gathering. It could by no means speak for even all of Gaul, much less the whole Western church. What makes it important is the fact that Pope Boniface II endorsed its decisions and made them binding on the Western church. By doing this, Pope Boniface II officially committed the Roman Catholic Church, at least in the West, to Semi-Pelagianism. And that remained official Roman Catholic doctrine.

Even before the synod met, a certain consensus emerged among Gaul’s theologians. The consensus acknowledged, generally speaking, that election was indeed true and that grace was necessary to salvation because of the sinful condition with which man was born. But having tipped the hat, so to speak, towards Augustine, the consensus also thought reprobation reprehensible. It insisted that the idea that men are predestined to evil and that damnation belongs to the will of God is so wrong that anyone who teaches it must be anathematized. The theologians pretty much agreed that, even though predestination is true, nevertheless God wills the salvation of all men, and that baptism enables a person to do what is necessary to the salvation of his soul.

The synod of Orange went in the direction of this consensus. As if to prove its orthodox character, the synod insisted on original sin, total depravity, and the inability of the natural man to do any good. It felt perfectly free to anathematize anyone who denied these truths. But then, in the same decision, with a complete about face, the synod also spoke of the ability of any baptized person to work out his own salvation. And, so synod said, God gives the beginning of faith and charity — with an emphasis on the word “beginning,” which made it clear that synod meant to teach that, from that point on, salvation was up to man.

More crucially, the synod refused to adopt the doctrine of reprobation and would only pour its anathemas upon the heads of all who taught that God predestinated to damnation. With this thundering anathema, the synod anathematized its own Augustine, whom the church had declared a saint.

Herman Hoeksema makes this comment on the synod of Orange:

It appears very clearly that they were afraid to maintain the strict doctrine of Augustine. The synod assumed an apologetic attitude. And although it opposed the doctrine of the Semi-Pelagians, it nevertheless was far from maintaining the positive doctrine of predestination and sovereign grace. 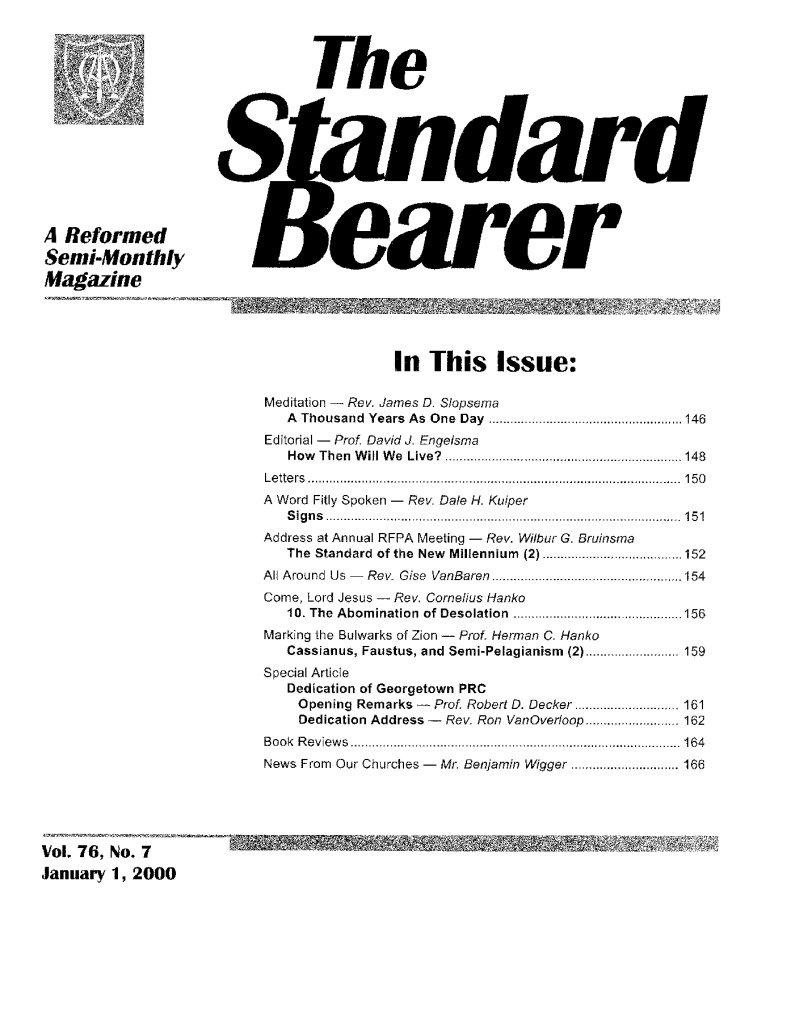