Calvin as a Preacher

Calvin is always remembered as a theologian, not always as a preacher. From the sixteenth to the twentieth century his sermons remained for the most part unpublished, and many of the manuscripts of his sermons were sold in the early nineteenth century for waste paper. Many, while extolling his virtues as a theologian and commentator, bewail his deficiencies as preacher. One writer, who seems not to have read Calvin’s sermons, says:

The defects of Calvin’s character showed themselves in his work as a preacher. There is a lack of sympathy and charm, deficiency of imagination, sparing use of illustration, no poetic turn, no moving appeal, no soaring elegance.1

To read Calvin’s sermons is to find in them all the warmth, passion, and love of God that are the marks of a great preacher. In his tribute to Calvin, delivered from Calvin’s own pulpit in Saint Peter’s Church, Geneva, on the four-hundredth anniversary of Calvin’s birth, Emile Doumergue said of him:

That is the Calvin who seems to me to be the real and authentic Calvin, the one who explains all the others: Calvin the preacher of Geneva, moulding by his words the spirit of the Reformed of the sixteenth century.2

Calvin’s Career as a Preacher

Few preachers in any age have matched Calvin’s output as a preacher. During the greater part of his years in Geneva he preached twice every Lord’s Day and on alternate weeks every weekday as well. This adds up to something just short of 300 sermons a year, an amazing total, especially when one remembers that he was also lecturing nearly every weekday in the Genevan Academy.

Generally he preached from the New Testament on the Lord’s Day, both morning and evening, usually continuing from the same book morning and evening, and from the Old Testament on weekday mornings. We know that he preached through the books of Genesis, Deuteronomy (200 sermons), Job (159 sermons), Judges, I and II Samuel (194 sermons), I and II Kings, all the Major and Minor Prophets (342 sermons on Isaiah and 174 on Ezekiel), all four Gospels, Acts (189 sermons), I and II Corinthians, Galatians, Ephesians, I and II Thessalonians, I and II Timothy, Titus, and Hebrews.

Of these his sermons on Genesis 14:13-22:14 (The History of Melchisedech), Genesis 25:12-27:38 (Of the Free Election of God in Jacob and of Reprobation in Esau), Deuteronomy, the Ten Commandments, II Samuel, Job, Psalm 119, Isaiah 53, Jeremiah, Micah, Galatians, Ephesians, I and II Timothy, and Titus as well as several selections of sermons (published under the titles, The Mystery of Godliness and other Selected Sermons and The Deity of Christ and other Sermons) have been republished in English in recent years. These sermons not only prove Calvin a sound expository preacher, a man of enormous talent as a preacher, and one thoroughly in touch with his audience, but they are as fresh and profitable for reading today as they were when they were first delivered. There can have been, in the history of preaching, few who came anywhere near Calvin’s stature as a preacher.

In his preaching, Calvin followed what is sometimes called an analytical style, preaching from the text and working phrase by phrase and verse by verse through a whole book of the Bible. His sermons generally lasted from forty minutes to an hour and were delivered extemporaneously. He took no notes or manuscript into the pulpit and preached directly from the Greek or Hebrew text, giving his own translation of the Hebrew and Greek as he preached.

He usually had no introduction but simply began his sermons with the words, “We have seen,” or a similar phrase. Even when he returned to Geneva after four years absence in Strasbourg, having been banished from Geneva through the machinations of his enemies, he began his first sermon after returning with the words, “As I was saying…,” as though he had not been gone and as though nothing had happened.

Reading his sermons today one finds them doctrinal but without technical and academic terminology, down to earth, full of application, intensely practical, thoroughly exegetical and expository, and totally lacking in anything but sound interpretation of the Word of God. A few examples from his sermons on Isaiah 533 must suffice as illustrations of his vivid language, earthiness, and concern for his hearers.

For today we like to count the votes, and many waverers look about them and say: “O dear! Only a little handful of men believe in the Gospel. If they were the larger party, I would join them willingly and gladly. But what is the good of joining forces with such a small group and leaving the multitude?” Now to destroy the force of these objections, the Prophet says that not just half a dozen or ten, but nearly everybody in general will refuse to obey our Lord Jesus Christ.4

What could be more down-to-earth or practical than that?

Speaking of work-righteousness in a sermon on Isaiah 53:7, 8 he says:

These hypocrites altogether mock God and all religion and have never understood what it is to have transgressed the Law of God. And we see also how they think they can clear themselves. If they have sung a mass, if they have mumbled their prayers, if they have performed some fooleries and trashy trifles, God will be pacified, like a baby with a rattle.5

His sermons are not mere commentaries, but the Word of God taught and applied to God’s people, for instruction, for edification, for rebuke, and for correction. In his preaching, Calvin certainly proved the truth of his own words: “Indeed, nobody is fit to teach in the Church, unless he voluntarily humbles himself, to be a fellow-disciple along with others.”6

That he was in touch with his audience is illustrated not only by such examples but by many stories. He is reputed to have paused in the middle of a sermon on a Lord’s Day morning and said: “Those three drunkards back there might just as well have stayed in the tavern, for all the good they are getting from listening to the Word of God.” On another occasion: “How can a man profit from the Word when his belly is so full of wine and meat that it takes all of his effort just to stay awake?”7

When I mount the pulpit it is not to teach others only. I do not withdraw myself apart, since I should be a student, and the Word that proceeds from my mouth should serve me as well as you, or it is the worse for me.8

He believed this because he believed that the preaching of the Word was a means of grace for God’s people—the main means of grace. “When we come together in the name of God,” he said, “it is not to hear merry songs, and to be fed with wind, that is, with vain and unprofitable curiosity, but to receive spiritual nourishment.”9 For this reason he believed that preaching ought to be “without display,” that God’s people might recognize in it the Word of God and that God Himself and not the preacher might be honored and obeyed.

One cannot help but notice when reading Calvin’s sermons that despite all efforts to prove that Calvin believed in the well-meant offer of the gospel, his sermons really prove otherwise. There is in them nothing of appeals, altar-calls, pleading with sinners, calls to the unconverted to accept Christ, but only plain and unvarnished exposition of the Word of God, accompanied by a quiet trust that God’s Spirit will move and save the hearts of men through the preaching. They are for the most part unemotional, yet moving, simple, and straightforward exposition that touches the heart with saving power. One would like to have heard him in person.

Analysis of Calvin the Preacher

In spite of D’Aubigne’s criticism of Calvin’s sermons (“They are considered by many persons the weakest of his productions, and it is hardly thought worthwhile even to glance at them”10), it was under Calvin’s preaching that Geneva became, in the words of John Knox, “the most perfect school of Christ on earth.” Of his preaching Beza said, “Every word weighed a pound” (tot verba, tot pondera), and the evidence is there to prove Beza correct.

His own confession on his deathbed was:

I protest before God that not rashly, and not without being persuaded of the truth, have I taught you the doctrine which you have heard from me; but I have preached to you purely and with sincerity the Word of God according to the charge which he gave me concerning it.

His preaching proved it.

3.Sermons on Isaiah’s Prophecy of the Death and Passion of Christ (London: James Clarke, 1956). 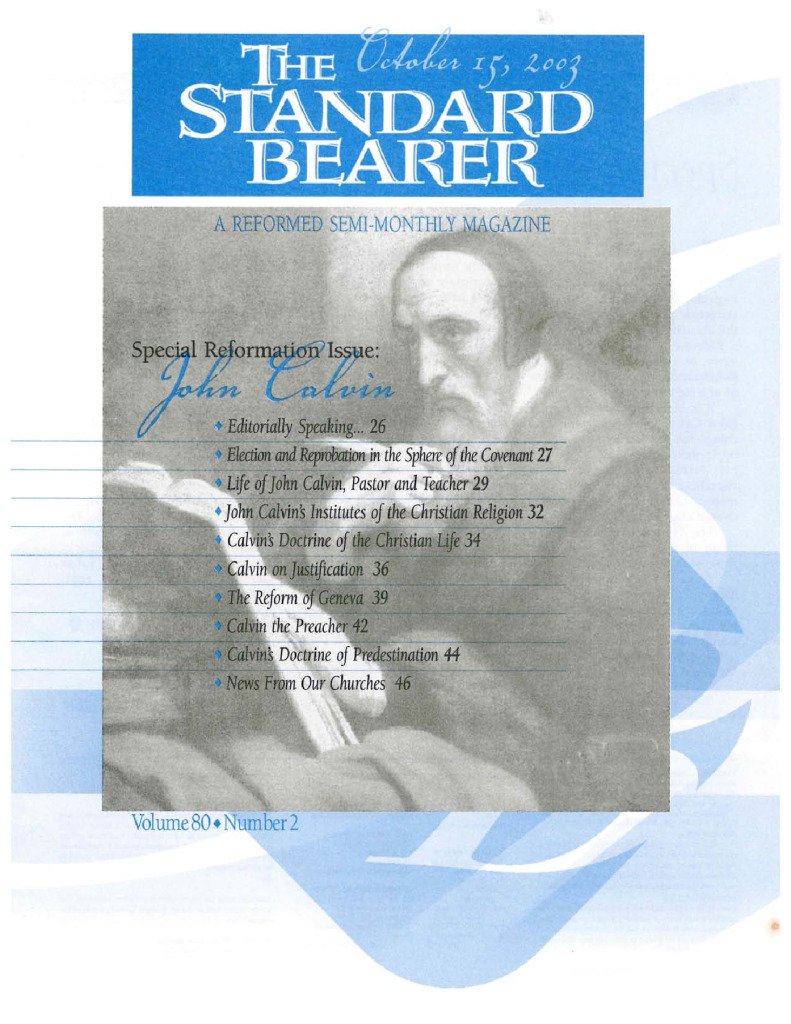