Our readers will recall that in our columns it was reported earlier that the Board of Trustees of Calvin College and Seminary had appointed a committee to investigate the teachings of three college professors. One of these was Prof. Howard Van Till, whose book, The Fourth Day, I criticized in earlier issues. The other two were Profs. Clarence Menninga and Davis Young, both geology professors. The secular press—both the Detroit Free Press and the Grand Rapids Press—has been reporting on this matter from time to time. On the front page of both its February 12 and February 13 issues, the Grand Rapids Press reported on the outcome of the investigation, namely, that the three professors were cleared. The February 12 edition did this under the headline, “Calvin profs criticized, but not penalized.” The February 13 edition carried the headline, “Calvin students applaud ruling absolving profs.”

It is not my purpose to report all that was stated in these articles. I will try to cull from them what thePress reported concerning the findings of the Board of Trustees and its committee, as well as a few statements shedding light on the matter.

First of all, the following excerpts from the Press of February 12:

•Calvin College’s Board of Trustees approved a report Thursday night that was “very critical” of three science professors accused of teaching a form of evolution that conflicted with a literal interpretation of the Bible.

But the report called for no sanctions against Clarence Menninga, Howard Van Till or Davis Young.

A statement issued by the college today said their teachings “‘fall within the limits set by the Christian Reformed Church’s guidelines for how to interpret the Bible.”

•”The committee report was very critical in a careful, pastoral and studied way, ” said the Rev. Charles De Ridder, president of the Calvin College Board of Trustees.

•Van Till, whose book on creation was the focus of much of the inquiry, said the report contains both criticism and praise and speaks of both caution and encouragement. “

With regard to his book, “The Fourth Day,” Van Till said, the report “urges me to refine my interpretative methods in such a way that neither ‘the event character nor the revelational meaning of biblical history will be called into question.'”

•Asked if the boards action meant the professors could teach whatever they wanted, college provost Gordon Van Haarn responded, “The answer, very simply, is yes, “

•Members of the committee who wrote the report said they hope the matter is resolved.

“I’m pleased with the direction of the report. It reminds the professors of their responsibility to the church,” said the Rev. Henry Vanden Heuvel, chairman of the subcommittee that prepared the report.

“I hope our report will serve as a kind of position for the entire college and church community.” Vanden Heuvel said he doesn’t think the three professors will “be watched very carefully” as a result of this report.

“I feel the air has been cleared. I hope the cloud has been lifted, and the professors can go back about their work without further scrutiny of the board. “

From the Press of February 13, we quote the following:

•At issue were the writings and teachings of the professors, all of whom hailed the report for supporting them in their research.

“By their recognizing the need for academic freedom . . . and by their encouraging us to perform our scholarship with intellectual integrity, the Board of Trustees have become the real heroes in this story,” said Van Till.

•A subcommittee report, which was received by the full board, found little fault with the writings of Menninga and Young and had only a few words of caution for Van Till, said the Rev, Charles De Ridder, president of the Board of Trustees.

On Friday, De Ridder said the subcommittee report was “very critical in a careful, pastoral and studied way.”

The report, however, was not especially critical of the professors and their work. It was “critical” only in that it took a hard look at the scientist’s work, he said.

“This report was collegial and well-balanced,” he said. “It takes issue with one professor (Van Till) and that I believe is rightfully so.”

•The professors said they are ready to get on with their work without the cloud of criticism hanging over their heads,

•After studying the matter for a year, the board’s five-man subcommittee submitted the report Thursday.

While it detailed a few differences in approach and interpretation, the report concluded all three men are teaching and writing in a manner that is within the tradition of the church.

The committee cleared Menninga and Young of any deviation from the CRC’s bedrock beliefs and had only minor complaints about Van Till—mainly that his theological definitions and arguments were not as clear as they could be.

•Even some of the harshest critics of the three professors said Friday that they are pleased with the report.

Before the investigation, the Rev. Henry Vanden Heuvel, pastor of First Christian Reformed Church in Zeeland, said he was concerned the professors, especially Van Till, weren’t “adhering to the principals (sic) of the Reformed faith.”

After serving as chairman of the sub committee, the minister has come to believe the professors are not: veering far afield from the traditional doctrines of the faith.

“We have pointed out that there are some limitations that they must follow, but I’m pleased with the direction of our report,” he said.

He said he hopes the “church can now renew its trust in the faculty at Calvin College.”

It is plain, therefore, that the professors are in the clear.

This outcome is not surprising. For this is not the first time that this same fundamental issue has confronted the Christian Reformed Church. One who has followed these matters will recall that similar issues confronted the CRC as far back as the 1960s and were even before the Synod itself.

Nor does the main significance of this judgment lie in the fact that the Board of Trustees has given its approval to evolutionism as such, though that is also significant.

The deepest significance lies in the fact that by this decision the Board of Trustees has given its approval to a certain view of and approach to Holy Scripture. I pointed this out when I was critisizing Dr. Van Till’sThe Fourth Day. I limited my criticism, in fact, to his view of Scripture.

It is this view of Scripture which is the common denominator in the teachings of all three professors.

And it is this view of Scripture which has now, apparently, received the approval of the Board of Trustees of Calvin College and Seminary.

Further, if you inquire how this was possible, I suggest that the answer is simple. All involved were supported or stymied by a position adopted earlier by the CRC, namely, the position of Report 36/44 on the Nature and Extent of the Authority of Scripture.

That explains why even a reputed conservative such as the Rev. Henry Vanden Heuvel was compelled to go along with the approval of the three professors’ teachings. 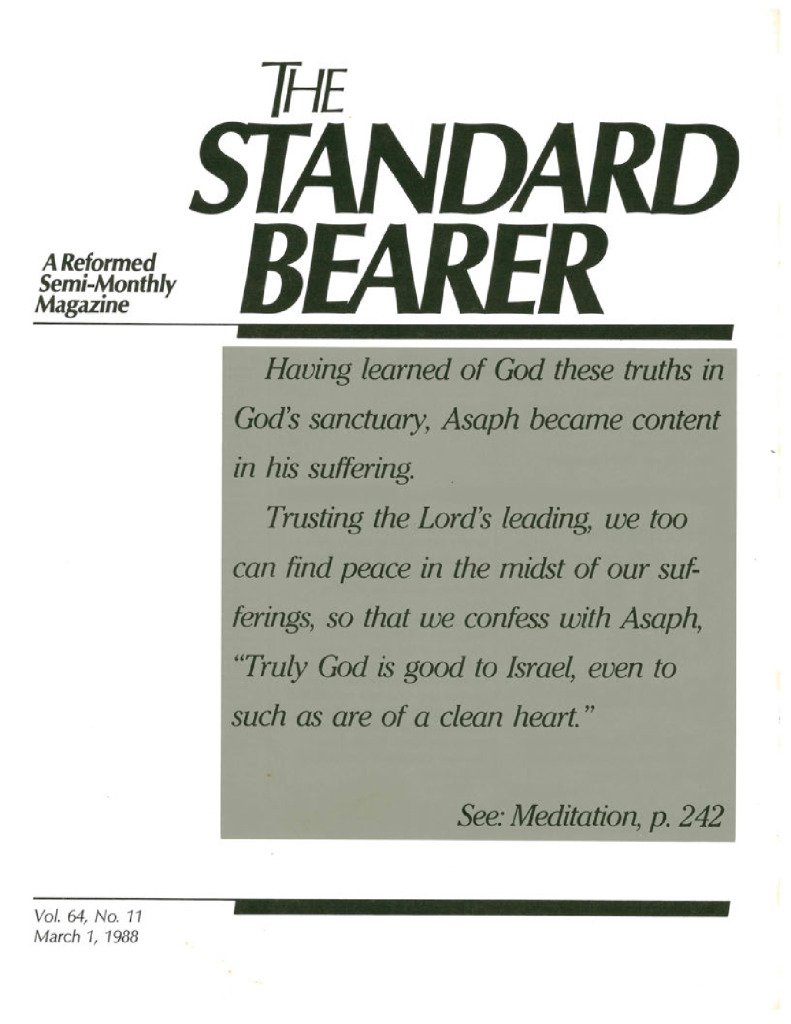