Prof. Gritters is professor of Practical Theology in the Protestant Reformed Seminary.

If Reformed ministers today in their 50-year pastorates did half of what Calvin did in his 27, preached a quarter as often per week as Calvin preached, worked with a tenth as much energy as did this man of God, reached even to Calvin’s knees in theological stature, were devoted to the people’s care with a fraction of his devotion, willing to suffer for only one year what Calvin suffered most of his ministry, and had hearts of love for God a quarter of the size of this man’s heart, their congregations would be healthy. Reformed churches would be prospering. Under the good providence and grace of God they would be able to survive in these evil days, and be good and strong witnesses of the Lord.

When a Reformed minister today reads about Calvin’s devotion to his work because of Calvin’s devotion to his God, he might tempted to respond with shame: “What have I done with my gifts? How have I served my Lord with my time?” But he might also respond differently. Understanding, first, that God gives men of Calvin’s stature and strength, capacity, and caliber, very infrequently, and second that each man is to work with the gifts that God gave to him…he might instead be spurred on to more faithful labor so that, following Calvin’s model, he too can be a blessing to the church of Christ in his corner of the kingdom as Calvin was in his.

But Calvin, a model? His detractors in Geneva said: “Better with Beza in hell than Calvin in heaven.” A pattern for Reformed ministers today? This reformer, writer, theologian, scholar?

Yes, like the apostle Paul in Philippians 3:17 (“as ye have us for an ensample”), Calvin can be a model for Reformed ministers.

His enemies in Geneva testified otherwise. His contemporaries slandered him with the kinds of accusations that today would make a man file defamation lawsuits. One of his first biographies, by Jerome Bolsec, was a vile piece filled with accusations of ambition, “filthy lucre,” womanizing, even homosexuality. Such evil accusations spurred Calvin’s colleague Theodore Beza to write the first biography that spoke truth about this man of God.

I have been a witness of him for sixteen years and I think that I am fully entitled to say that in this man there was exhibited to all an example of the life and death of the Christian, such as it will not be easy to depreciate, and it will be difficult to imitate.

If there is any truth in the claim that great temptations for pastors are sloth, self, sex, and silver, this was not learned from observing John Calvin.

First, Calvin was selfless. Although God thrust him into the limelight, he did not seek publicity and acclaim. Before he died, he left clear instructions that his grave-site not be marked, lest people venerate him instead of his God. Likely he would have shuddered to think that the doctrines of grace and the true system of the Christian faith would be named Calvinism. Unlike some of God’s servants, his ego did not match his abilities. Because he was conscious of the danger, he taught: “The only true dignity of a Christian is indignity.” His last words before his death were: “God had pity upon me.”

Sexually he was upright. Before he was married he was hesitant to take a wife. “I shall not belong to those who are accused of attacking Rome, like the Greeks fought Troy, only to be able to take a wife.” When finally he began looking for a wife he made it known to his friends who were looking for him: “Always keep in mind what I seek to find in her, for I am none of those insane lovers who embrace also the vices of those with whom they are in love, where they are smitten at first sight with a fine figure.” After his wife died, when he was only 40, he pledged that he would from then on “lead a solitary life.” And he did. Chastely. For 14 more years.

As to
silver, some of his enemies accused him of filthy lucre, but most knew better. He was not rich, nor interested in riches. Fighting off the hurtful accusation, Calvin said: “If some will not be persuaded while I am alive, my death at all events will show that I have not been a money-making man.” And who has not heard the pope’s purported praise of Calvin: “The strength of that heretic consisted in this, that money never had the slightest charm for him. If I had such servants, my dominion would extend from sea to sea.”

And any accusation of sloth is reckless. What man today could go stride for stride with this man in his tireless devotion to the work? He slept very little and probably did not know what a vacation was. A worker, Calvin preached seven and more times per week, lectured to seminarians, wrote letters in the thousands, authored books, visited sick, led consistory meetings, met with troubled refugees, counseled and advised the deacons and hospital directors. Even on his deathbed he wanted to work on dictation. When one of his friends urged him to rest, Calvin responded, to the effect: “What, would Christ find me idle when He comes?”

Second, Calvin was a willing and patient sufferer.

Calvin suffered such physical hardships you might be inclined to call him the “Genevan Job.” Headaches, stomach cramps, asthma, the knifing pain of kidney stones, and hemorrhoids. You first smile, then wince, when you hear that his doctor recommended that he ride a horse to jar loose the painful kidney stones, but that his hemorrhoids were too painful for him to sit on the horse. He worked through physical ailments that would have made most strong men today apply for early retirement.

His pain of heart must have been harder. His very first son lived only two weeks. Three years later a precious little daughter died at birth. Two years after that, another child was born prematurely, and died. When his dear help-meet of only nine years contracted TB at age 40, he lost her, too, and lived a widower for the rest of his ministry—almost 15 years.

Just as difficult was his “cross-bearing.” The common people in Geneva treated him poorly. They named their dogs after him, composed songs to mock him. Calvin’s love for David’s Psalms may be explained by his David-like opposition—for Christ’s sake. Willingly he endured all these troubles. Before Calvin became Geneva’s pastor and Rev. Farel was thundering at him to stay, Calvin said: “If I had the choice, I would rather do anything than comply with your wishes in this matter. But when I remember that I am not my own, I offer my heart as a burnt sacrifice to the Lord.” When, after he had been banished from Geneva, the authorities changed their minds and asked him to return, he said, “I’d rather go to the executioner.” But he went anyway, because Calvin did not pastor where he would be most comfortable, but where he would be most useful.

Third, Calvin was a wise and sympathetic pastor.

To describe (or think of) Calvin as a scholar, theologian, church reformer, disciplinarian (in the good sense), liturgist, catechist, organizer of schools, hospital and orphanage builder, or anything else, without describing him first of all as a pastor of the church in Geneva, would be to do him great injustice. Calvin was all these, but to be accurate we must describe him as “The Pastor of Geneva.”

He was a sympathetic pastor, with a heart that yearned for the people’s good. Calvin longed to deliver the people from suffering. He suffered with them. Geneva’s poor, orphans, widows, and sick, found an advocate in Pastor Calvin. Under his influence the office of deacon was restored in the church. His heart was so full of charity, he wrote: “Do we want to show that there is reformation among us? We must begin at this point, that is, there must be pastors who bear purely the doctrine of salvation, and then deacons who have the care of the poor.” Calvin’s compassion made Geneva a refuge for those fleeing persecution. Others could not flee but were arrested. Calvin personally tried to gain their release and took time to write letters to them. He ministered to many in need, not only visiting face to face those from whom he could have contracted the plague, but giving from his own small stores to help orphans. Nothing could stop him from this God-given care: I am prepared “to pawn my head and feet, that it (money) will be found forthcoming here.”

He was also a wise and balanced pastor. This man served with a rare wisdom. He refused to support radicals (the “200 percenters”) in the city, resisting his own colleagues at times. He gave good counsel to churches torn by strife, telling the people both that “some of you are impelled by a zeal not tempered by moderation,” and that they must be patient with their less-than-satisfactory pastor. Then, to the consistory: “It will be your duty to bring [the people] to reason with all meekness and humanity…(and) you know the rule which the Holy Spirit lays down…that each should yield and give up his right.” His wisdom even anticipated Article 11: “Sometimes, for the good of the congregation, ministers must go even if they are innocent.” His pastoral wisdom warned against judging a man’s salvation, called the people to seek the salvation even of their enemies, cautioned the “hyper-Calvinists” of his day (“We cannot yet distinguish the elect from the reprobate”), and kept him by the side of the heretic Servetus right up to his execution, if peradventure God might give repentance…(cf. II Tim. 2:25).

Fourth, Calvin was a teacher of the church’s children.

As good ministers today know, Calvin knew that the church would not last another generation if the children did not receive catechetical instruction, plus thorough parental Christian education. He saw the urgent need not only for training in the faith, but also for secular education from good teachers.

So he instituted catechism. After he was banished from Geneva, he would not return except under four conditions, one of which was catechism. He (and the consistory) demanded that parents send their children, beginning already at age 7, and that they be disciplined if they refused. He required the children to memorize answers, sing the Scriptures to commit it to memory, and attend classes until they made confession of their faith. And that qualified officebearers be the teachers.

With a pastor’s heart, he also drew up ordinances for Christian schools. Calvin understood that the church also had responsibility to promote the Christian education of the children. So Geneva established the Academy to train preachers, magistrates, lawyers, etc. Also a school for the children, beginning at age 7.

Children learned theology, but also the arts and sciences, because Calvin was convinced that the Reformation could grow and increase only through a study of the arts and sciences as well as that of theology. As to finances, the schools were to be well-funded, so that even the poor could attend. And, just as with catechism, parents were to be punished if they refused or neglected to send their children to the school. Very clearly, Calvin saw that, although the education of the children was the duty of the parents, both church and state had part in it.

Passionately this pastor was interested in the welfare of the lambs! 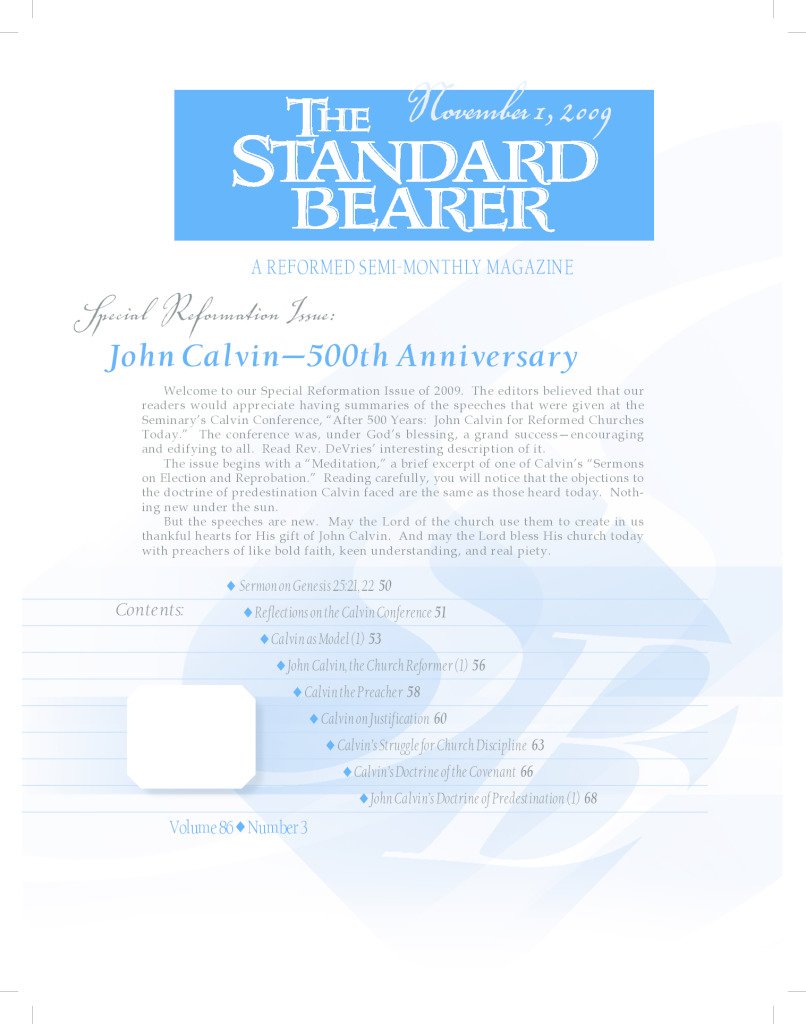