I want to take this opportunity to congratulate my close friend and colleague in the ministry on the publication of this beautiful and important work. There is not, as the author comments in the introduction, any such commentary in the English language on the Canons. This book fills a great lack and we hope and pray that it has the widest possible circulation. An exposition of the Canons of Dordt is welcome for a number of reasons. For one thing, the Canons are still the Confessional basis of a large number of Reformed Churches both in this land and abroad. An exposition in English ought to be welcome to all who hold this confession dear. Secondly, although the Canons were adopted finally by the Reformed Churches in the Netherlands, Reformed theologians from throughout Europe participated in the work and finally signed these Canons, so that the Confession is of much wider interest than Dutch Reformed Churches. The Canons were truly a document produced by all the Protestant and Reformed Churches about a century after the Reformation. Thirdly, while it is sad but true that many within the Reformed Churches are departing from the heritage of the faith, those who want to maintain this heritage will have to know their Canons thoroughly. This book will be of assistance to them. E.g., in the case of the recent “Boer Gravamen” which was rejected by the Synod of the Christian Reformed Church in 1980, the Synod rejected the gravamen (against reprobation in the Canons) largely on the basis of a committee report which corrupted the doctrine of predestination and gave to the Canons a “new interpretation which neither our fathers at Dordt nor the Reformed Churches ever gave to them. To defend the Church against this requires that one know our Canons thoroughly. In the fourth place, the Canons were written against the heresy of Arminianism. Who will deny that Arminianism (though of a different brand) is still rampant in the church—even more so than in the days of Dordt? The Canons are the answer of the Reformed Churches to Arminianism and the development of what has become known as the Five Points of Calvinism. With the renewed interest in Calvinism throughout the world today, this book will find a broad acceptance.

The first section of the book is very valuable. It contains a history of the Arminian conflict in the Netherlands, a history of the Synod of Dordrecht, an important discussion of the confessional status of the Canons, the author’s translations of the historical forward to the Acts of the Synod of Dordt and the opinions of the Arminians concerning the five articles. This historical section alone is worth half the price of the book.

Every article in both the positive section of the heads of doctrine and in the negative section (the rejection of errors) is treated concisely, yet thoroughly and in an interesting way. A separate chapter is devoted to the Conclusion of the Canons—an important chapter, for it is the conclusion which has been used by many enemies of sovereign predestination who try to make the Canons teach something they in fact do not teach. At the end of the book is found an index of Scriptural passages cited.

Because our Canons are such an important and beautiful Confession, all those interested in the truth of Scripture ought to purchase their own copy of this book. The price may seem steep to some, but in comparison with prices of books nowadays (I recently read a paperback book of less than 200 pp. which sold for $5.95), it is cheap. And we often forget that we quickly spend more than $20 to eat out at night, while for less, than $20 one can purchase a book which will give to the reader countless feasts for the soul.

From a letter which came with the book we learn that, “the new paperback edition of this standard commentary on the Revised Standard Version of the Bible makes its scholarship available to a broad range of people at a modest price. The editors have revised and replaced some volumes in the series and have drawn on the leading contemporary biblical scholars in an attempt to provide a commentary that is balanced and up-to-date in terms of both its scholarship and its reflections on the contemporary relevance of the biblical text.”

The commentary is not really a very successful one. In the first place, it is very brief—almost too brief to be of help. Secondly, it is fairly technical and makes many references to many different scholarly works. While this gives the volume some value for students in theology, it is not of much help for the people of God. Thirdly, it must be read with caution, for it is not always as Scriptural and Reformed as one would like in a commentary. One quotation from the commentary will demonstrate this and give, at the same time, some flavor from the commentary. The quote is the exegesis on the well-known passage in 2:13.

They are not, however, left to themselves in this enterprise (of working out their own salvation). At first glance it seems to remove all responsibility from the Philippians, except perhaps the passive consent to let God work in their midst. This is why G. Bornkamm (‘Der Lohngedanke im Neuen Testament’, Studien zu Antike und Urchistum, Munich, 1959, p. 91) can call the verse an oddly paradoxical sentence, raising all manner of dogmatic issues to do with justification sola gratia and synergism. But such matters seem remote from this Pauline situation, even if later generations of Christian thinkers have to wrestle with the mutual relations of human accountability and divine initiative and grace (see Barth, ,pp. 71-5). In the context Paul probably introduces the promise of divine help to reassure his friends that, since he cannot be with them (‘in my absence’), they should not despair but remember that God’s gracious assistance (his ‘active good will’, Gr. eudokia; .the Heb. equivalent is rason, meaning God’s declared purpose of good in electing and blessing His people; cf. Lk. 2:14 and E. Vogt’s discussion ad rem in The Scrolls and the New Testament, ed. K. Stendahl, ET London, 1958, pp. 114-17) is available both to will (i.e., promote the desire) and to work (Gr. evergein, effectual action in bringing human aspiration to good effect is implied). The Greek phrase rendered for His good pleasure is a little unusual. Hyper tes eudokias is ‘in the interests of, for the sake of, His good pleasure, and this wording suggests to BDF (Sec. 231.2) that it should be detached from verse 13, and made the opening of the next verse: ‘for the sake of (human) goodwill (as in 1:15;

Both of these volumes are reprints of works which date back to 1857 and 1860. Many of our older ministers probably have commentaries by Charles Hodge in their libraries. But for a long time students and younger ministers could only obtain secondhand copies. Charles Hodge for many years was professor of theology and New Testament at Princeton Seminary in its better days. While one may not always agree with his exegesis, the fact remains that Hodge was a careful workman; and his commentaries are generally in the Reformed line and are helpful.

One of the helpful features of these volumes is the fact that in most instances the Greek is put in parentheses, so that its presence will not prove to be a stumbling block to the reader who does not know the Biblical languages.

This is a reprint. For some time now the original edition, published by Eerdmans, has been out of print. I do not know whether it is still possible to obtain the three volumes of the original Dutch edition; but perhaps most readers would prefer anyway to read this English abridged edition. Nevertheless, the fact that this work is newly available, especially for theological students, is beneficial. Every student should have a work like this among his reference works.

The original work of Kuyper in the Dutch language was a work of three large volumes. I have already indicated that the English edition is an abridgement. It includes the first fifty-three pages of Volume 1 and all of Volume 2. A bonus in this English edition is an interesting portrait of “Abraham De Geweldige” and an introduction by Benjamin Warfield.

Few contemporary New Testament scholars have the wideness and depth of learning which Dr. Bruce has. While recently retired from the University of Manchester (England) he continues to add books to the large number he has already written. Generally speaking, his books are worth purchasing and reading.

In this book the author attempts to collect all the data from Scripture and secular sources on the four men mentioned in the title because the author is convinced that knowing all we can about these men will help us to understand better the apostolic Christian community and the tensions, debates, troubles, and problems which existed within it.

The book is interesting and helpful, although it must be read with care. There is too much room left in the book for literary and historical criticism. To cite but one example: the author is of the opinion that the position which Stephen took in Jerusalem was more radical than that of any of the apostles with respect to the Old Testament economy.

We recommend the book to our ministers and teachers especially, although all can read it with profit.

A quoted view on modern English versions (of the Bible)

The most modern English versions (of the Bible) are none of them convincing on the level of language; I find this morally and intellectually confusing, since I find it means I am incapable of taking seriously anything that they say. Since I cannot think that I am unique in this experience, I am forced to regard the new versions as ill-judged, and their imposition as an act of folly. I am clear that the principles of English style are a moral matter, not just a question of taste. Reticence, clarity and sobriety, strength and simplicity, logical coherence and a decent habit of speech have their foundations in moral sensibility. The modern English Bibles are written in the language, or the non-language, of a class, and of a class that has no authority in spoken English.

“The Bible in its Literary Milieu.” 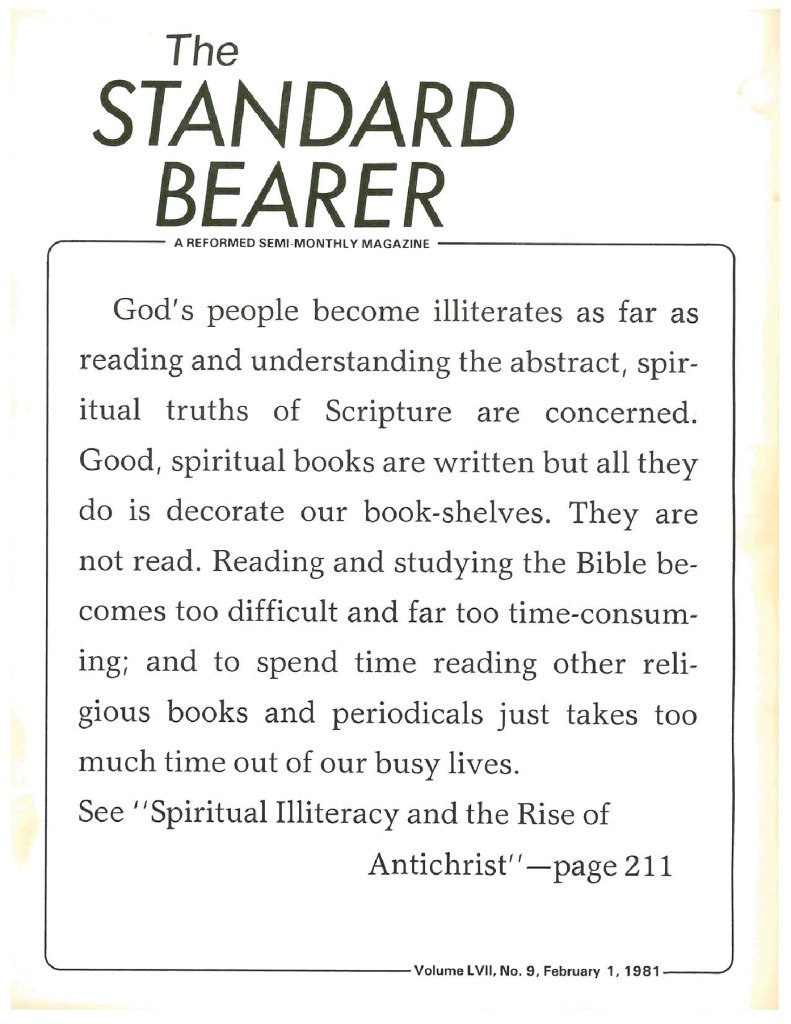