But Our Eyes Are Upon Thee

But Our Eyes Are Upon Thee

O our God, wilt thou not judge them? for we have no might against this great company that cometh against us; neither know we what to do: but our eyes are upon thee.

We know what took place in the past year. However, tomorrow, the new year, the remaining years of our life are a mystery to us. Since the future is a dark unknown, we are so inclined to ask many questions. Will we enjoy health, or will we become sick and perhaps even die? Will we have prosperous times, or will there be economic depression?

Because we do not know the details of the future we are inclined to become afraid. If our portion is going to be sickness, how will we be able to press on? Or will we give up? If the church of Jesus Christ will sustain a greater measure of opposition as she fights the battle of faith, how will she be victorious? How will God govern all things for her well-being? We know that the people of God will suffer more hardships as the end approaches, and the devil will work with greater determination to deceive the very elect of God—but we do not know the details.

Looking back is easy. Viewing all that one has come through, one can say, “Hitherto hath the Lord helped us.” However, looking forward is not so easy. Through our human eyes we look into the future and we tend to despair. Everything looks like an obstacle over which we will stumble.

At this time, as well as always, we need the Word of God to direct us, to shed light upon our path, so that the darkness of doubt and despair may be dispelled. We must look upon Jehovah, finding our strength and courage in Him. We can do that by following the example of Jehoshaphat, king of Judah, when he and the people of Judah were in a position in which they did not know what to do. This account is found in II Chronicles 20, particularly verse 12.

Judah was in danger. Three mighty kingdoms, Moab, Ammon, and Mt. Seir, had joined hands together in a confederation for the purpose of taking the children of God captive and spoiling the land. Militarily speaking, the confederacy had every advantage, and Judah had no chance. Further, Judah had received the distressing news that the enemy was arrayed for battle.

Understandably, the children of Judah were afraid. The very thought of having to meet such a formidable foe brought them to their knees, upon which they cried unto the Lord, “We know not what to do.” They could visualize the battle before their eyes. The helpless children and the sick would be brutally killed, while all the able-bodied would be taken captive to lead a life of slavery.

Their fear was a real fear. A perplexing question vexed their righteous souls. These were the enemies which God had forbidden them to destroy. How could God first forbid the destruction of those enemies, and then bring them up to destroy His children? Would God really allow this confederacy to wipe out His church? After all, Israel was not as the other nations, for she was God’s chosen possession and heirs to the promise. The promise was that they were to have the victory, that the seed of the serpent would go down in defeat. Did God change? Would Christ be born? How could the promised seed be born if the church were trodden under foot and destroyed?

No doubt, as children of God, you and I have similar questions as we begin this new year. We, too, are and shall be surrounded by enemies as long as we live.

There are powers that threaten our natural, physical lives. Today there are wars and rumors of wars. The nations of the earth continue to struggle for the psychological advantage of having the biggest, the newest, and the most. The environment is becoming more and more polluted with toxins invading our water and air. Abortion abounds, with euthanasia gaining momentum. What will life be like for me and my children in the year and years to come?

However, the real problem for the church of Jesus Christ is not that which will harm our physical lives. The battle which we will fight is not first of all an international political war, but a spiritual battle of faith against unbelief. Thus, the battle is in the heart.

That old adversary, Satan, goes about as a roaring lion seeking whom he may devour and destroy. In fact, your and my enemy does not appear to be our enemy. What he has to offer is pleasing to our flesh and very hard to resist. A life of fun and pleasure, luxuries and riches, appeals to our vanities. The old deceiver stands in the doorway of the theater, entertains us on our televisions and videos, beckons us to join him in a multitude of places for pleasure, so that we think less and less of church attendance and the studying of God’s Word, whether that be at home or with the fellow saints in Bible study society. When we look for work he tempts us with double wages if we will only work on Sunday. His labor unions will give us job security and better wages. Always we must be on our guard.

As if that were not enough, the father of the lie points to the achievements of men rather than to the glory of God. Man has subdued the earth from the depths of the sea to the outreaches of space. No problem is so great that man in his ingenuity cannot figure it out. Philosopher of philosophers, Satan has the answer to all our inquiries. His pleasing message is not to follow the narrow, strict, hard way of obeying the law, but to mold and shape our own destiny, as we have the right to do what we please with our own life.

Sounds pleasing, does it not? So pleasing does it sound that we are ready to join Satan and the world. In doing so we are ready to abandon the preaching of regeneration as God’s way into His kingdom. We are ready to trade our citizenship in the kingdom of everlasting life for that which is passing and temporary.

The knowledge that we are so inclined puts fear into our hearts. How shall we be able to stand in a world that is becoming increasingly wicked? We, too, cry “We know not what to do.”

In answer to the question of what to do we turn again to the example of Jehoshaphat. This scriptural history is more than just a Bible story. It is God’s message to us. What did Jehoshaphat do which serves as our guide even today? He gathered all the people before the Lord and they bowed down as they looked into the sanctuary of the temple. Although they did not know what to do, their eyes were upon Jehovah. This is always the answer for the troubled church. She must look away from herself and focus her attention upon her God.

Judah had good reason to lift her eyes heavenward. Their king, Jehoshaphat, reviewed before them all the wonderful works which the Lord had performed on their behalf. He led them safely out of Egypt and through the burning wilderness. During this journey He protected them from the burning sun by the pillar of cloud by day, and He guarded them by a pillar of fire by night. The shoes on their feet did not wear out; they were fed and refreshed with bread from heaven and water from the rock. When the enemy came He sent the angel of death to disquiet them. No, their God was not a man, but the living God, creator of heaven and earth.

In addition to listing all that Jehovah had done for them, the king had to make plain to the people that God had not so wonderfully preserved them because of their own goodness. Their history clearly showed otherwise, in that they constantly went awhoring after other gods from which Jehovah had to call them. The goodness was in the Lord Himself, as that goodness was represented in the presence of the blood of Jesus Christ typically manifested on the altar. On the basis of that blood, Judah could very well look to Jehovah and trust in His promises.That is your and my calling today. As members of the church today we have an even clearer understanding of Jehovah’s faithfulness. Christ no longer is simply a promise, but He has come in the flesh and fulfilled the work of redemption. We have the privilege to behold God’s covenant faithfulness as it is revealed in the cross and as the benefits of that cross are given to us through the working of the Holy Spirit.

By faith we now see Jehovah in the marvelous depths of forgiving love as we kneel before the cross and witness the suffering and death of the Son of God in our flesh. Like the children of Judah, we behold such power, such love, such mercy that we are moved to bow in humble adoration and confess that Jehovah is in truth the only God and worthy of all praise. Thus, to Him we turn for guidance and courage as we face whatever He sends us in the new year.

Knowing these things we confess three truths. Our first confession is that God knows all the future because He is God. God does not have to wait around for something to happen before He can act. Rather He is the sovereign determiner of all things.

Secondly, we confess that the whole purpose of God’s control is centered in His people as they are in Jesus Christ. No matter what He will in His wisdom do with us in the new year, we firmly believe that it will be for our good.

Finally, we seek our strength from Him, believing that He will not send us a great trial without also giving us the necessary grace to bear it.

What happened to Judah as they stood before the Lord with their little ones and their children, as they placed their burdens on the Lord, confessing that He is faithful and has control of the battle from beginning to end? They were not destroyed by the enemy. Rather, the enemy fought among themselves and were killed by those of their own number. Needless to say, Judah could not boast in this victory, for the battle was the Lord’s.

Before this God you and I also stand. Upon this God we must fix our eyes. When we grow fainthearted, discouraged, and know not what to do, we must remember Judah. For, turning to Jehovah in all our needs, we will have no fear for the new year and for all the years yet to come, but will have peace in our hearts, knowing that we shall abide forever in Christ, whom we shall follow into glory. 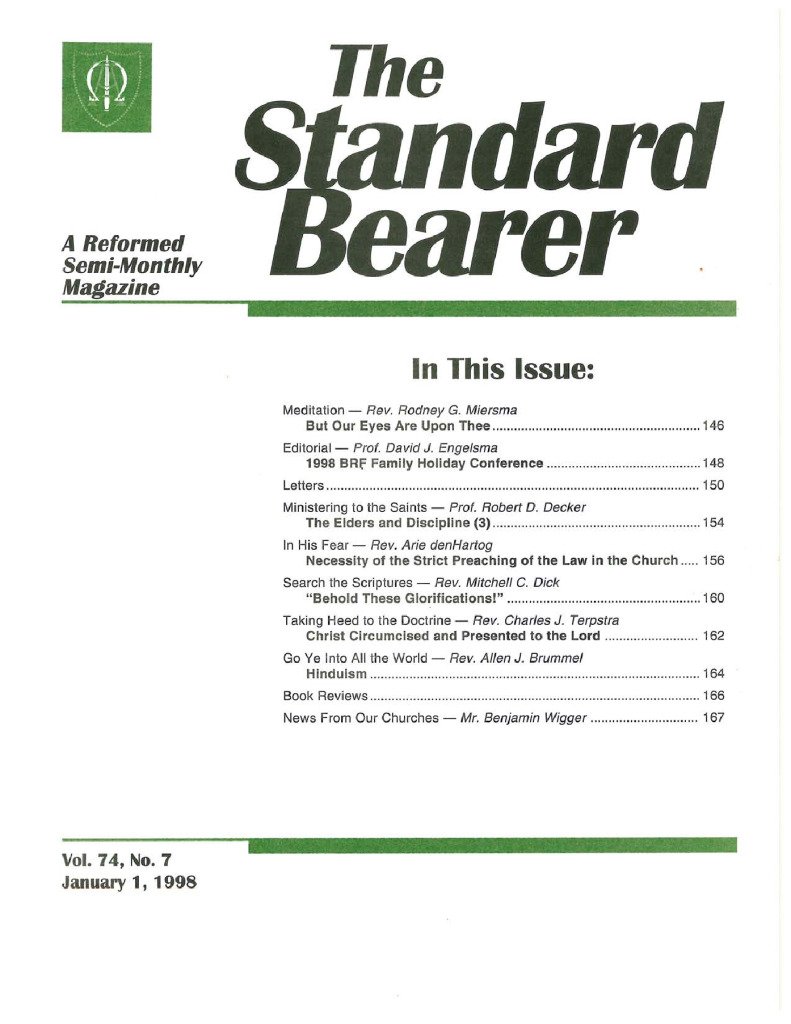