Of the writing of books on the doctrine of inspiration there is no end. And it is somewhat doubtful whether this latest book will advance the cause of the truth of inspiration or whether it will serve to quiet the current storm of controversy which rages over this truth.

The author’s expressed intent in adding to the number of books on this subject is to mediate between the “conservative” position which insists that the doctrine of inspiration means that the Bible is totally inerrant in all its parts, and the more moderate position which holds that the Bible is only fallible in what God intended it to teach-the position which is more or less taken in most evangelical circles. Not a great deal of attention is paid to unbelieving higher criticism, although the author refers to it now and then and criticizes it rather severely. The result of this position is that the truth of infallibility (or inerrancy) comes under heavy attack at certain crucial junctures.

Perhaps a quote from the blurb which accompanied the book will help to understand the position of the writer.

Marshall first considers various theories of the nature of inspiration, in the experience of the original writers, and for the status of the biblical text. This leads to a consideration of the “entire trustworthiness” of the Bible, the inerrancy debate, and the place of biblical criticism, on which he argues, “It is possible to distinguish between the proper use of methods of linguistic and historical study and the adoption of skeptical presuppositions . . . the answer to skepticism is not to ignore it but to do a better job.”

The heart of the argument of the book can be found in the author’s discussion concerning what exactly is meant by accuracy or truth. While this point is discussed in more than one place in the book, the author argues that the Bible is by no means accurate according to modern standards of accuracy, although it is accurate by biblical standards. He refers in this connection to the use of summaries of speeches, round numbers used b biblical figures, discrepancies in chronologies, etc. On pp. 54-57, e.g., he discusses various ways in which the Bible speaks of truth. He points out that the Bible uses language in a great variety of ways, sometimes to set forth factual data, sometimes in the asking of questions—which have no “truth” implied in them, and sometimes in commands which also do not imply any truth of falsity. (This is so obvious that one wonders why the author belabors the point.) Then again he points out that there are parables in Scripture which cannot be taken as factual truth—also an obvious fact. He reminds his readers that sometimes God is not speaking to man, but man is speaking to God, as in the Psalms. The latter is not necessarily “Truth” either—although he fails to reckon with the fact that the psalmists often spoke to God by divine inspiration also, a means which God used to reveal His Word. Finally, he points out that the question of truth involves the deeper question of “true for whom?”—as with the Old Testament levitical laws.

These questions lead him into flatly erroneous positions. He speaks of parts of the Bible as human (115), allows for some higher criticism (90), admits that later biblical teaching can correct former and earlier biblical teaching (108), and insists that the cultural situation determined what the instruments of inspiration said (110).

The weaknesses of the book can be summarized under the following points. In failing to distinguish properly between important concepts, he creates problems where there are none. He fails, e.g., to distinguish between formal and material inspiration, between revelation itself and Scripture as the infallibly inspired record of revelation, and between inspiration proper and graphic inspiration.

He fails to do justice to the miracle of Scripture; i.e., that Scripture belongs to the wonder of grace and that it is not understandable in empirical terms of investigation. While he denigrates the efforts of higher criticism to explain Scripture in human terms, he nevertheless opens up the doctrine of inspiration to critical analysis and thus makes room for higher critical methods.

He raises questions where none really exist and brings a certain doubt into the mind of the believing child of God.

He fails to deal properly with the fundamental truth that Scripture interprets Scripture, with the result that “discrepancies” are found in the record of Scripture which do not, in fact, exist.

And all of this is easily summed up in the one objection that he introduces a human element in Scripture which ought not to be introduced—in the interests of guarding against any kind of “dictation theory.”

I found the book stimulating and enjoyable in certain regards. It is well written and it forces one to examine closely the position of infallibility. This has its value and worth, for we must defend the biblical doctrine of inspiration on all fronts. But as a solution to the problem, it is inadequate. 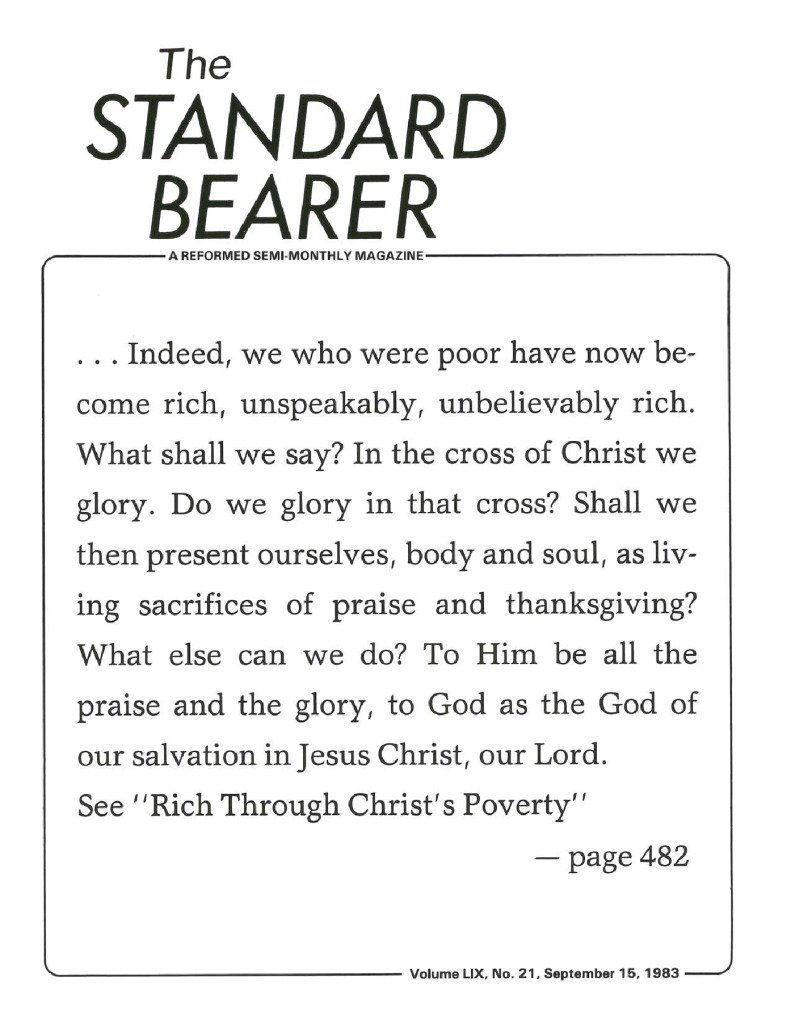