This book is a Chalcedon Study; i.e., it is sponsored by Chalcedon, Inc., a group of conservative Christian scholars of which Rousas Rushdoony is the President.

The justification for this book is found on the blurb of the outside cover. The authors believe that Christian scholarship has suffered from a kind of “intellectual schizophrenia . . . Secular textbooks are baptized (sprinkled, usually) with a morning prayer or daily required chapel. Sometimes students do not even get this. The students and their parents find themselves paying high tuitions for educational content which is not noticeably different from that provided by tax-supported public universities. People are in effect, paying for very expensive morning prayers.”

The authors plead for a Christian “reconstruction in every branch of the college curriculum.” “The essays in this volume represent a beginning. Too many academic disciplines are absent from its pages, but at least a preliminary start has been made. The writers are committed to the interpretive principle of biblical a priorism: the Bible judges both the framework and the content of each academic discipline.” As the subtitle of the book suggests, the authors are heavily indebted to Cornelius Van Til, long time professor of apologetics in Westminster Theological Seminary, for their basic viewpoint; and the book is an effort to put the epistemology of Van Til into practice in Christian higher education.

The first section of the book deals with basic epistemological questions, and gives the epistemological basis for Christian scholarship. The second section has to do with the application of these principles to various academic disciplines: Psychology, History, Economics, Education, Political Science, Sociology, Mathematics. The third section deals with “Foundations for Christian Reconstruction” and has chapters on Apologetics, Philosophy, and Theology. While this section was in this reviewer’s opinion, the most interesting, the chapter on Theology by John Frame was the best because it gave an excellent and helpful insight into the thinking of Cornelius Van Til.

There is much in Van Til with which I agree; there are some aspects of his apologetics with which I sharply disagree. Although this is not the place to go into these questions, the whole book emphasizes the importance of genuine Christian scholarship in Christian education. As was Van Til’s thinking, so also this book is highly philosophical, and therefore, not easy reading. It is however a book that ought to be read by those who are interested in this question of genuine Christian education.

In 1539, while Calvin was in Strassburg after his banishment from Geneva, Cardinal Sadoleto from the Romish Church sent a letter to the Council and citizens of Geneva which was intended to lure the people of Geneva back again to the Romish Church. This letter was given to Calvin to answer. He answered it in his own powerful way and with such persuasive arguments that God used this answer to preserve Geneva from the clutches of Rome.

I reread these two letters once again and enjoyed them perhaps more than the first time, now many years ago. They have been published by Baker in a small book with a forward by Lester De Koster, a rather lengthy and interesting introduction and an appendix which includes the portions of The Instituteswhich deal with the subject of justification by faith and the decrees of the Council of Trent which deal with the same subject.

Although these letters are also included in Calvin’s “Tracts and Treatises,” if any of our readers do not have this three volume work, they are urged to purchase this small volume and read these crucial documents of the Reformation. 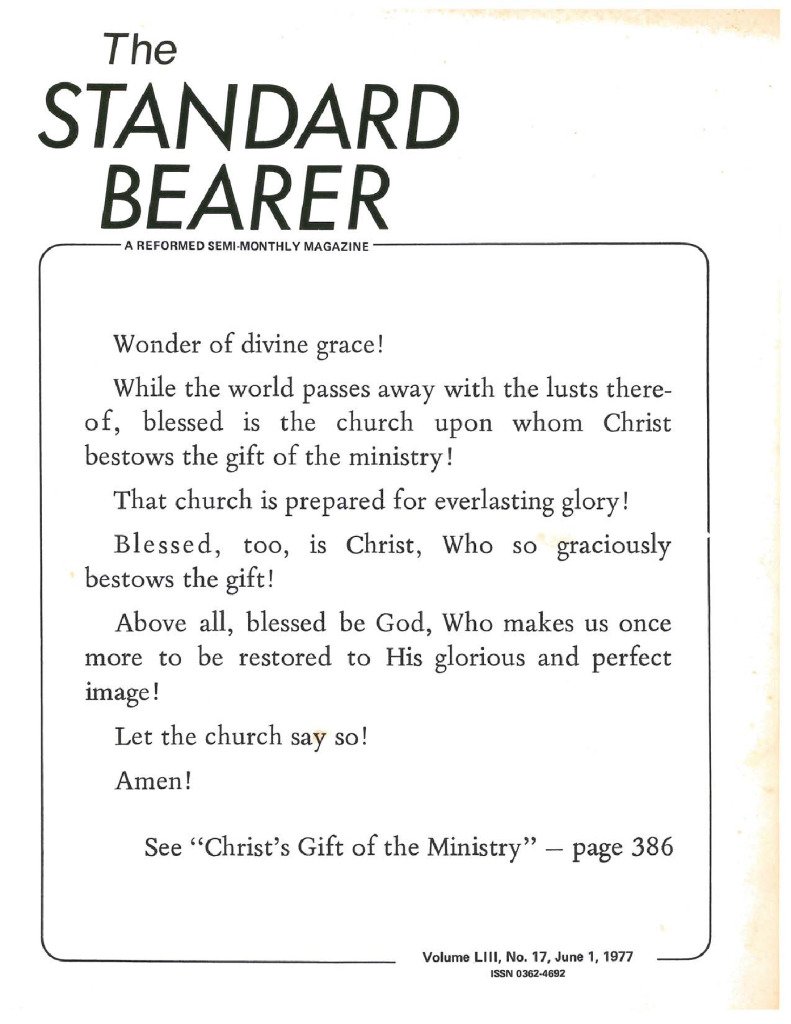