This book is part of the “I Believe In…” series which Eerdmans is publishing. It is authored by the Pastor of St. Michael-le-Belfrey Church in York, England. The author came to this Church when it was very small and all but dead. Using the methods advocated in this book, the author built up the church into a large and flourishing congregation. Abandoning in large measure the traditional view of the Church and advocating a restructuring of the Church in almost every respect, the author presents a view of the Church which, though not in accord with the Scriptural doctrine of the Church, is in his judgment better suited to meet the demands of the Twentieth Century. It is not much help in the all-important study of ecclesiology and gives insight only into what is being done today in an effort to revive dying congregations.

Jimmy Lyons is a missionary evangelist at large in the Presbyterian Church of America. He wrote this book as a sort of diary which he kept on a “round-the-world” trip to visit places of poverty in Southeast Asia and India. It is his purpose to tell of the incredible suffering of the Vietnam refugees, of the indescribable poverty of the masses in India, of the efforts which are being put forth by the Church to alleviate some of this suffering, and of the solemn duty which the Churches in America have to support these relief efforts. The book is not intended to be theological, nor is the bit of theology contained in it soundly Reformed. Its intention is more to give some impression of the suffering among the poor and displaced in Asia. But it is almost too brief even to do that.

I might add that the Reformed Educational Foundation which has published this pamphlet is a printing concern founded by men of the Presbyterian Church in America which offers a complete line of printing services and has as its goal the publication of materials of a Reformed and Presbyterian nature.

Gerard Berghoef is a furniture manufacturing executive who also served as elder in the Christian Reformed Church for twelve years; Lester De Koster is at present the editor of The Banner. These two have collaborated to prepare a book which can serve as a guide to ministers and elders in the work which Christ places upon them in the congregation.

The book is written from the viewpoint of Paul’s last admonitions to the elders in the Church of Ephesus which are found in Acts 20:28-31. It has six main sections to it: these sections cover the idea of the eldership, the calling of elders in relationship to each other, the calling of elders in relation to the church both on the local level and on the level of the broader ecclesiastical assemblies, the calling of elders with respect to particular problems such as divorce and remarriage, etc., and the calling of elders with respect to the future. There are many worthwhile aspects to the book, some of which ought to be mentioned. Generally speaking, the book is written from a conservative and Biblical viewpoint and can be used by elders within our own Churches. It has many excellent practical ideas in it for particular aspects of the work of elders and much practical advice which is helpful in the many problems which elders confront. I have no doubt but that the book can be read and studied with profit by anyone who is determined to perform the work of his office in harmony with the Scriptures. It has also a rather lengthy section which deals with particular texts which can be used by elders in different problems which they meet and in different aspects of their work. This section alone is very worthwhile.

Nevertheless, there are weaknesses in the book. I do not dwell on these weaknesses to leave the impression that the book is not worth getting; but rather to serve as a guide to those who make use of it, so that they may know for what to beware.

While the book is intended to be a practical guide to the work of elders and while there is some material in the book concerning the idea of the office, we nevertheless consider the book deficient in this respect. I suppose it is difficult to say how much on this subject is too much when the book aims to be practical. But the fact remains that a clear understanding of the office as to its Scriptural idea is important for an understanding of the work which elders must perform. That the book lacks this becomes also apparent in places. Some of the advice given to elders would apply equally well to a busy executive in charge of a large manufacturing plant. The book is written with too broad a purpose in mind! I mean that the book is intended to serve all elders regardless of their church affiliation and regardless of the type of church polity embraced in their particular denomination. It is therefore not always specific with respect to Reformed Church Polity and does not take a definite stand on particular doctrinal issues.

There are serious mistakes in the book. I mention three of the outstanding ones. In the first place, the book does not have a correct view of the relationship between the autonomy of the local congregation and the authority of the broader assemblies. While this subject is not treated in detail, the authors state:

Presbyterian and Reformed Churches locate authority, derived from Christ, in the congregation’s eldership. Broader assemblies derive their, authority, by delegation, from the local council or consistory or session. The classis, presbytery, conference, and again, the synod, general assembly, general conference can act for the local unity because they are presumed to be but extensions of it. It is out of this context that this handbook is written, allowing for such denominational adaptation as required. (p. 38)

In the second place, the book takes a wrong view of divorce and remarriage. It allows for those who are divorced and remarried to be members of the Church. This is contrary to the Scriptures, although well within the position of the Christian Reformed Church.

In the third place, the book openly advocates financial help from social agencies and government funds for the poor and, in fact, speaks of a broad function of the Church in social work. There is a promise in the book that another volume will appear on the work of the deacons, and, presumably, these questions will be treated more fully in that volume. But this viewpoint is nevertheless wrong.

Nevertheless, we recommend this book to those who are elders for it has much in it which can be of good use to them in their work. 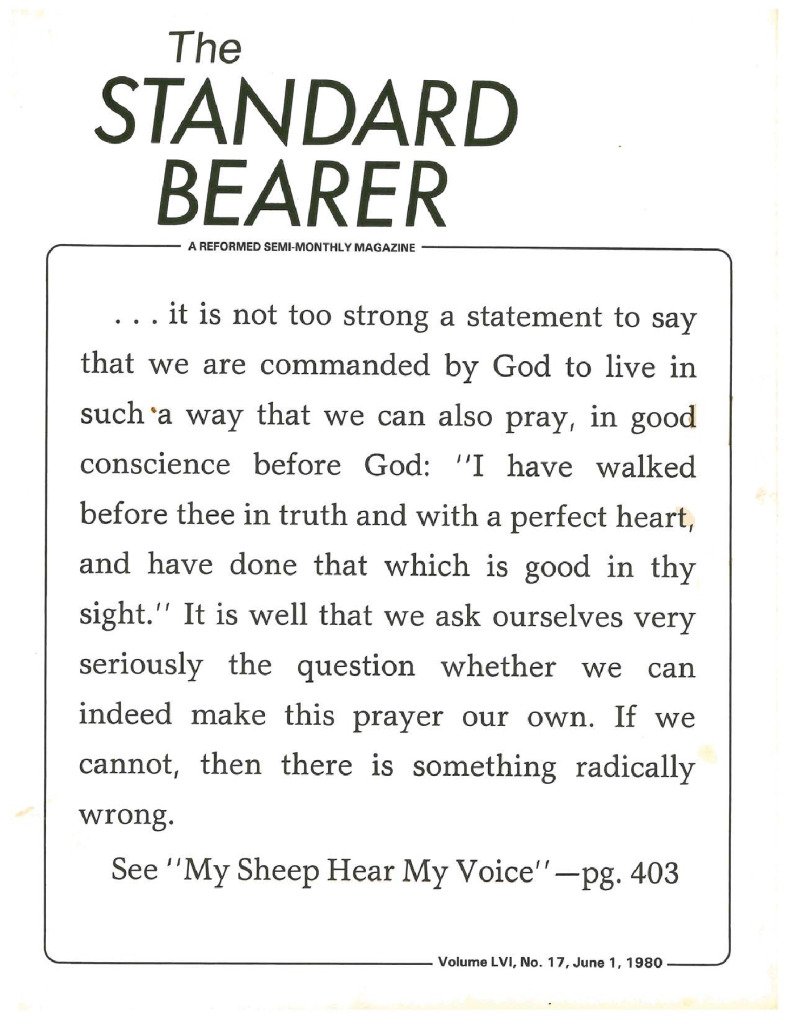