This book is a study of the Dutch, specifically the Dutch and Reformed, in America from the late 19th century to the present. In the very nature of the case, this study of an ethnic subculture, as it is called is at the same time and in large measure a study of the group’s religious history as well. This makes the book interesting for us: it is a book about ourselves, our ancestors, our churches, our struggles. More than this, the book is scholarly, well-written, and is filled with anecdotes and sidelights which make it very interesting. Besides, it is amply footnoted; and the footnotes are sometimes fully as interesting as the body of the text.

Anyone who studies this period and this segment of church history would do well to include this book in his reading.

At the same time, I would warn that at least some of the book must be read with discretion and critically. I would call it history with a tilt. Naturally, I was especially interested in Part III, which covers the history from 1917-1928, the period which includes the Janssen controversy and the common grace controversy, as well as the events and developments preceding these. And my interest was partly due to the fact that I lived close to one of the principals in these struggles and was able to learn much about them firsthand. In that light, I would mention the following:

1) I do not believe that the treatment of Dr. Janssen and the proceedings of the Synod of 1922 are accurately presented and evaluated. The author seems to follow the line of Harry Boer and theReformed Journal in this respect.

2) Along the same line, I do not believe that the common grace controversy and the Synod of 1924 and subsequent events are correctly presented.

3) I do not believe that the relationship between Dr. Janssen and Herman Hoeksema are correctly pictured. There was no great personal bitterness between the two. True, they disagreed fundamentally. But there was also a kind of mutual respect. Janssen respected Hoeksema for his honesty and consistency, and Hoeksema always had high regard for Janssen as a scholar. I can remember Hoeksema saying, for example, that as a scholar and a teacher Janssen stood head and shoulders above the professors who criticized him. And in later years Janssen still would send Hoeksema his greetings from time to time.

4) I think it is rather simplistic on the part of the author to depict the ongoing struggle in the CRC as a struggle between pietism and Kuyperianism. There were other currents. For example, at the time whenThe Witness was begun, one of the men (later a common grace proponent) complained that it was too late to do anything because the whole church was shot through with Arminianism.

5) I find it strange that after the account of 1924, Herman Hoeksema is hardly mentioned. Like it or not, he and the Protestant Reformed Churches were a force to be reckoned with also in explaining the history of the CRC. Hoeksema and his theology constituted an undeniable reference point in the post-1924 history of the Reformed community. The author seems to ignore the evidence on this score.

The discerning reader will undoubtedly find more points of disagreement and criticism.

Nevertheless, this book is a good addition to one’s history/church history shelf

As the debate in this country continues over the legality of abortion, the presses produce more and more books, articles, and pamphlets. It is impossible to keep up with it all, and the concerned Christian sometimes wonders what he ought to read and what he ought to lay aside. In my judgment, this is one book every Christian ought to read. It is complete without being tediously long. It is a thorough treatment of the subject without a lot of technical (both legal and medical) terminology thrown in. It presents the case against abortion from a Biblical viewpoint and gathers a surprising amount of material from the Scriptures to show the terrible evil of this national sin.

The “blurb” on the back cover is worth quoting.

Abortion is a topic of immense importance. Not only is it a burning controversy in its own right, but it is also symptomatic of a larger crisis in contemporary values. At stake is the very meaning of human life.

In spite of 1.3 million abortions annually in America, there is much the public does not know about what has become the nation’s more common surgical procedure on adults. The Christian public, in particular, needs a more thorough understanding of the questions surrounding abortion questions like, What does the Bible say about prenatal life? When, if ever, is abortion justified? What are the medical risks of abortion? Are the unborn individual persons, biologically, spiritually, legally?

Building on a broad base of biblical data, John Jefferson Davis answers these and many other questions related to the ethics of abortion. In so doing, he equips readers to challenge current assumptions in the areas of law, medicine, and social concern, and to affirm the value of human life both in and out of the womb.

In brief, the author first of all describes the three positions taken on this issue and gives the arguments in favor of them. These three positions are: 1) Unlimited abortion; 2) Abortion under certain circumstances; a) Abortion to save the life of the mother; b) in cases of pregnancy due to rape or incest; c) in case of subhuman retardation; 3) Only to save the life of the mother.

The author also enters into the medical dangers of abortion and claims there is a conspiracy of silence on this matter.

His arguments from Scripture are detailed and conclusive and present an excellent Biblical foundation for the position that abortion is murder. The one exception is, and with this the church has almost always agreed, that abortion may be performed to save the life of the mother.

We urge those who are interested in a study of this question to obtain this book.

The author is Associate Professor of Theology at Gordon-Conwell Theological Seminary. 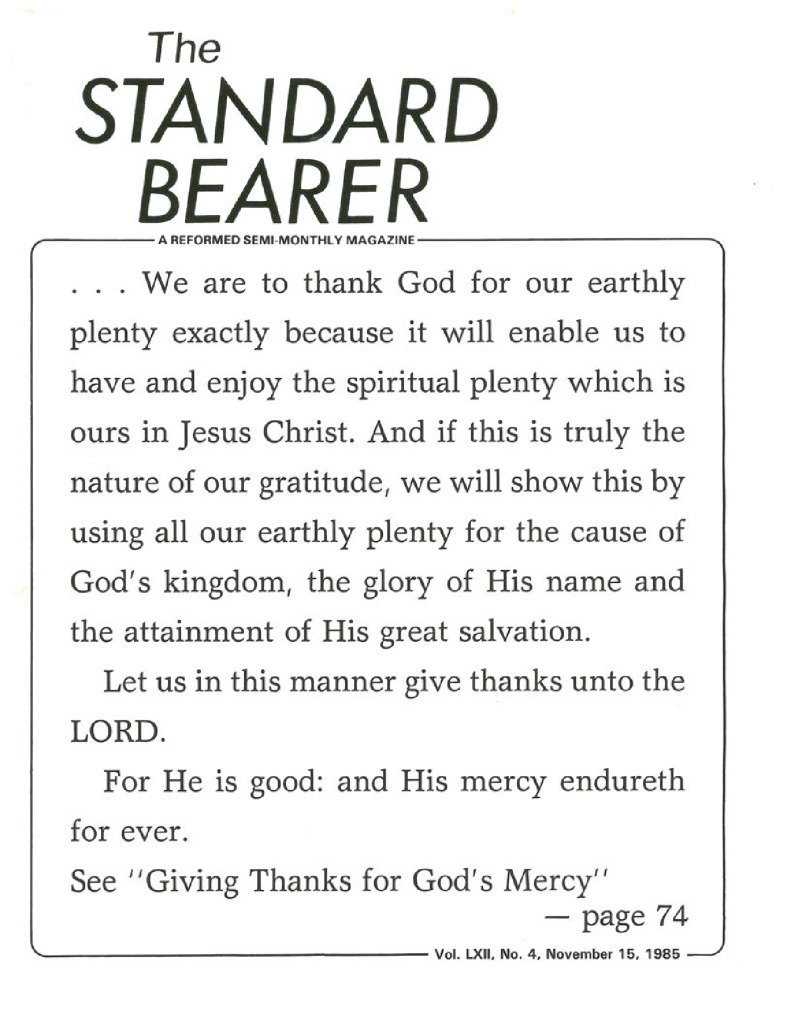