This is the notorious little book by the notorious Dutch theologian, which has already created no little stir among Reformed people in the Netherlands. It embodies in rather concrete form the deviating views concerning the doctrine of Holy Scripture for which Dr. Kuitert has become notorious. Yes, I mean “notorious,” not “famous.” For, in my opinion, no truly Reformed man can classify Kuitert as anything but a heretic, in spite of all his avowals to the contrary.

However, this reviewer wishes to add to his previous criticism of Kuitert’s views this thought, that the thesis underlying this little book and the views previously criticized is a proud one. It is proud, in the first place, because it implies that now for the first time the church is at last learning how to read and understand the Scriptures. This evinces disdain not only for the church of the past and all its labors, but, what is worse, disdain for the presence and work of the Holy Spirit in the church down through the centuries. It is a proud thesis, in the second place, because it really places all the ordinary members of the church, ordinary believers, in the class of nincompoops who cannot understand the Scriptures without the assistance of theologians and learned men of science. This is also essentially a disdain of the work of the Holy Spirit, Who has been given not only to theologians, but also to the entire church. Is it not the attitude of the Scribes and Pharisees, who spoke of the common people as “this people who know not the law (and who) are accursed?” Admittedly, this criticism is severe; but it is my firm belief that it is deserved. And the sooner the churches realize that the stakes in the current battle against the so-called “new theology” in the Netherlands (and, by import, on this side of the ocean) are not some abstruse theological questions which can safely be debated within the confines of the confessions, but the very heritage of the faith itself, and that, too, at one of its most crucial points, the truth concerning Holy Scripture,—the sooner we realize this, the better.

I recommend this book in a negative way. I recommend it not for the value of its teachings. But I recommend that it be read, by those who cannot read the original Dutch version, in order that those who read may understand what is going on in the Reformed community. Read it—and condemn it.

This is not a book for every reader, but a rather technical work. As the dust jacket “blurb” has it, “the pastor, the teacher, the seminarian and the theologian” will value this book.

As is evident from the wide variety of chapter headings, this is neither a unified dogmatical treatise on the doctrine of Holy Scripture, nor a hermeneutics. The subjects treated in this book are of both a dogmatical and a hermeneutical nature, and partly of an apologetic nature.

It is impossible in the space of a brief review to offer a summary of the entire contents, much less to offer a detailed criticism. A few general comments must suffice:

1) The book suffers from its lack of unity, a lack which is due to the fact that it is only a symposium.

2) The book contains, in some chapters, far too much material about the views of others and frequently very little positive development of whatever views the writer himself may hold.

3) The book claims “to understand the past, evaluate the (new) insights, and build upon them.” In the opinion of this reviewer, in some instances of an attempt to “build upon” the new insights, a break with the past is committed—or at least a compromise. And in some instances the book evinces a rather sterile, traditionalist view. Thus I consider, for example, M.J. Arntzen’s attempt to maintain the old, traditional idea of a divine and a human element in Scripture. In the opinion of this reviewer, this distinction—though sometimes well-meant—is neither safe nor correct.

All in all, however, I would recommend that the theologian or budding theologian who wishes to keep abreast of current developments in respect to the doctrine of Holy Scripture would do well to study this book. It does indeed, require more than a superficial reading. 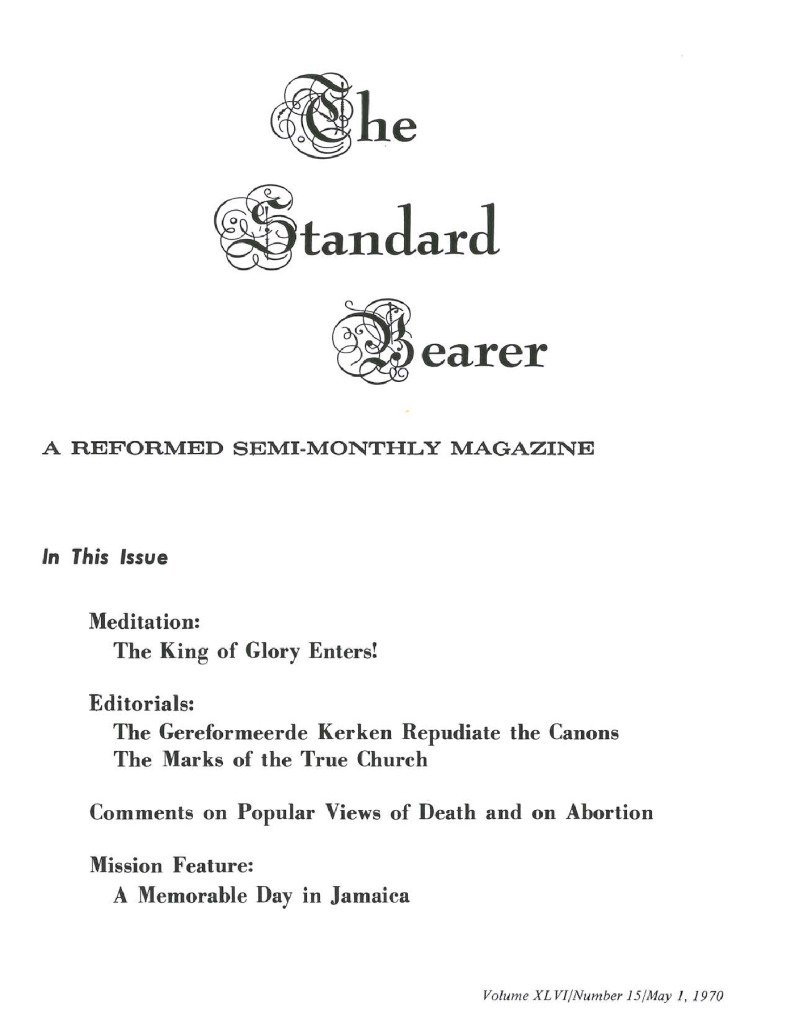