This book is in a sense a biography, in which the author relates his own experiences, as is evident from the fly leaf in which he relates, “In precious memory of my only son CALVIN JOHN who at the age of three years and seven months had finished his earthly sojourn and on the day of his departure said: “I am going to Jesus. Don’t cry, Daddy.”

The setting of the story is in the Netherlands, in the province of Zeeland. The story itself centers about Fransje, whose early experiences in his short life are told with a deep insight into the thoughts and life of a small child. Fransje is in many respects like any ordinary boy of his age, has his companions among children, but seeks also his friends among older people. He is keenly interested in the wonders of God’s creation, and at the same time shows a remarkable concern about spiritual matters. He enjoys his Bible Story Book, struggles with his personal sins, burdens his mother with many questions which she finds difficult to answer, and expresses a growing desire to be with Jesus.

The novel is written in an appealing, lucid style, which carries the reader along as an interested observer of the religious life of the community, the spiritual atmosphere of the home and the godly strivings of the parents. One may have a bit of difficulty at first with the dialect of the Zeelanders, which is generously interspersed throughout the book, but the translation of the various words and expressions in the back of the book proves to be helpful. We soon even enjoy the added flavor of the apt remarks of the people so characteristic to that community.

It is refreshing in a time when so many “religious novels” are tainted with a superficial religion and the error of the free-will, to find a book that describes the deep spirituality of a people who live close to the Lord. True, the mysticism of that part of the Netherlands also becomes evident in the story. The characters speak of ‘experiences,’ of ‘inner voices,’ and traumatic conversions. Yet the author points out that the real comfort of the believer is not found in the various experiences, but rather in the testimony of the Holy Scriptures applied to the heart by the Holy Spirit.

The close of the book, where Fransje dies, is the most impressive and absorbing part of the whole story. The family struggles to be submissive to God’s will and finds comfort in the assurance that the lad is in glory, based partially on his own confession, but also on the covenant promise ofPsalm 105, and the passage from Isaiah 40:11, from which the title of the book is taken, “He shall gather the lambs in his arms, and carry them in his bosom.” There is, of course, an even deeper comfort in the assurance of faith, that God is just in all His works, and good in all His dealings with His people.

This book can be strongly recommended to all who can still read and enjoy the Dutch language. In fact, one looks forward to more from the same author.

This book is a revised edition of the rather well-known work, The Child’s Story Bible, by Catherine Vos. The revision was capably undertaken by the daughter of Catherine Vos, Marianne Radius, who “has preserved the cherished style and content of her mother’s work; at the same time she has brought the language closer to the understanding of today’s children, eliminated some repetition. . . .” (Cf. the Foreword)

Written for children from the ages of 3 to 13 years, and adhering rather closely to the text of the Scriptures, the book uses simple, direct, and clear language. The stories are, told in a straight-forward manner, and the reader senses the reverence of the author toward the Scriptures as she interprets them for young children. However, the vocabulary in the revised edition is perhaps better suited to the early school-age child than to the pre-schooler.

The author does not add many insights or interpretations of the history of the Scriptures, as, for example, the reason that God did not accept the offering of Cain (it was without blood) or God’s reason why Moses could not lead Israel into Canaan (he was an imperfect picture of Christ); but probably that was not the purpose of this story Bible.

In illustrating this addition, artist Betty Beeby has used discoveries by archeologists for accuracy in portraying life in Bible times. However, her artistic approach is unconventional, and, to this reviewer, distorted and difficult for the young child to understand; and it detracts rather than adds to the dignity of this book.

The author, professor of New Testament at Covenant Theological Seminary has brought together in this little book an expanded edition of three articles which he previously wrote on this subject for different periodicals.

The book is concerned with the growing cry, also within evangelical circles, for women officebearers in the Church. There are several important points which the author makes. 1) The Scriptures emphatically teach that women, because of their subordination to man—a subordination rooted in the creation ordinance—, may not assume a teaching or ruling role in the Church of Christ. 2) That this position of subordination does not, according to Scripture, imply an inferior position in any respect; that, in fact, spiritually, women stand on a par with men. 3) Women, because of their God-given place in the Church, have an important role in the work of the kingdom though they are barred by Scripture from the teaching and ruling ministry. 4) Those who press for women elders and ministers can supports their views from Scripture only by denying the full inspiration of Scripture. Thus their position involves an incorrect hermeneutical principle which denies the Scriptures to be fully the Word of God.

Apart from the fact that the author is not clear on the point of whether women may function in the office of deacons (he speaks of deaconesses, but in the sense of helpers to the deacons; and this may arise from a misunderstanding of the office of deacons) the book is an excellent exegetical defense of the Scriptural position on this question. Although it is brief, it is concise, to the point, Scripturally grounded, a sufficient answer to such men as Jewett in his book “Man As Male and Female,” and to be recommended to all who are interested in this important question. 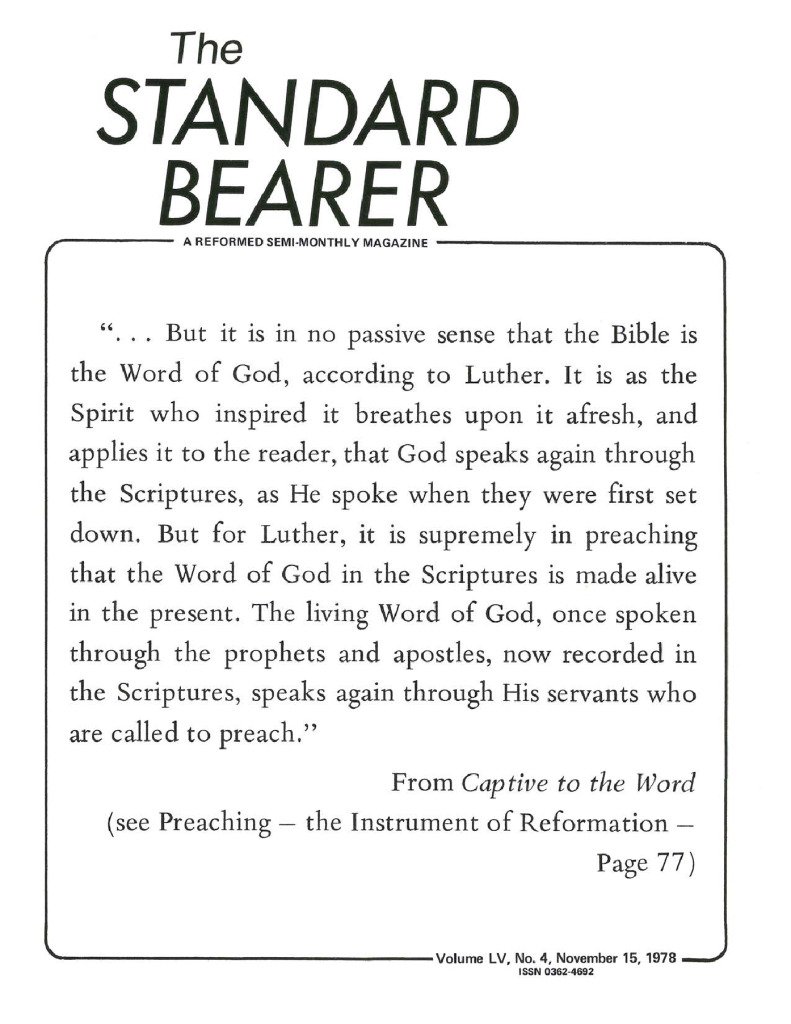