If one may judge the number of books being published of Forsyth’s writings and the number of books published concerning his theology, there is a revival of interest in this author. He lived from 1848 to 1921 and spent most of his life as a minister and teacher in the Congregational Church in England.

This present book gives brief excerpts from his practical writings and is, chiefly, a devotional book. If one can overlook the deficiencies in Forsyth’s theology (which appear quite clearly also in these writings) one can find many pleasurable hours in reading this anthology. Forsyth’s writings are clear and original in though and give profound insight into many problems of the Christian’s life. A brief quote from an address to students who were ready to assume the active ministry will give some idea of this:

You are first of all stewards, not owners. Men with a trust, not men with a property. You have to carry what many others have tried to carry, a Gospel, a Truth many times uttered. And so I would warn you not to strive to win notice by originality but only by the Gospel you preach. The truest things you will have to say are those that have been said many times, but they are still the most original. Grace is the most original thing in the world. However original sin may be, Grace is more original still. The Grace of God is so original as to be unexplainable.

It is a great thing to have gifts to bring home to your hearers, great truths, in a clever way, but remember always that he essential thing fro a minister is not gifts but faithfulness. Faithfulness not to your people but to God. (p. 134)

This book is a reprint of a book first published in 1959 and which has gone through four printings. Dr. Hendriksen is well-known as a lucid and Reformed writer of New Testament commentaries and as a scholar in the field of eschatology. This book is intended as a study guide or as outlines to be followed for Society discussions. It treats a large number of subjects under the general themes of “Death and Immortality, ” “The Intermediate State,” “The Signs,” “The Second Coming,” “Events Associated With the Second Coming,” and “The Final State.” The book suffers from too short a discussion of many subjects, as this type of book inevitably does; but it is highly recommended as a guide to the study of Eschatology and as a valuable book for use in “After-recess Discussions” in Society life. The author concludes each chapter with a number of questions for general discussion.

The author is a reporter for the Cincinnati Post & Times-Star and is thoroughly acquainted with the Washington scene and the enormous influence of churches in their lobbying for particular legislation in the halls of Congress. The book discusses the first major victory for the church lobbyists in the Civil Rights Act of 1964, the role of church leaders in the OEO legislation, especially in the Delta Ministry in which federal funds were funneled through churches to fight the war on poverty. It is a story of corruption, misapplication of funds, involvement of the church in politics and social issues, and power plays by the church. There is also a lengthy discussion of the bill for education passed in 1965 and the part the church played in this legislation. The lobbying roles of various church groups and the problems involved in church lobbying are treated. For those who are interested in this subject, this is a valuable book. It left us with the strong impression that the church in America today is far more apostate than is generally realized. 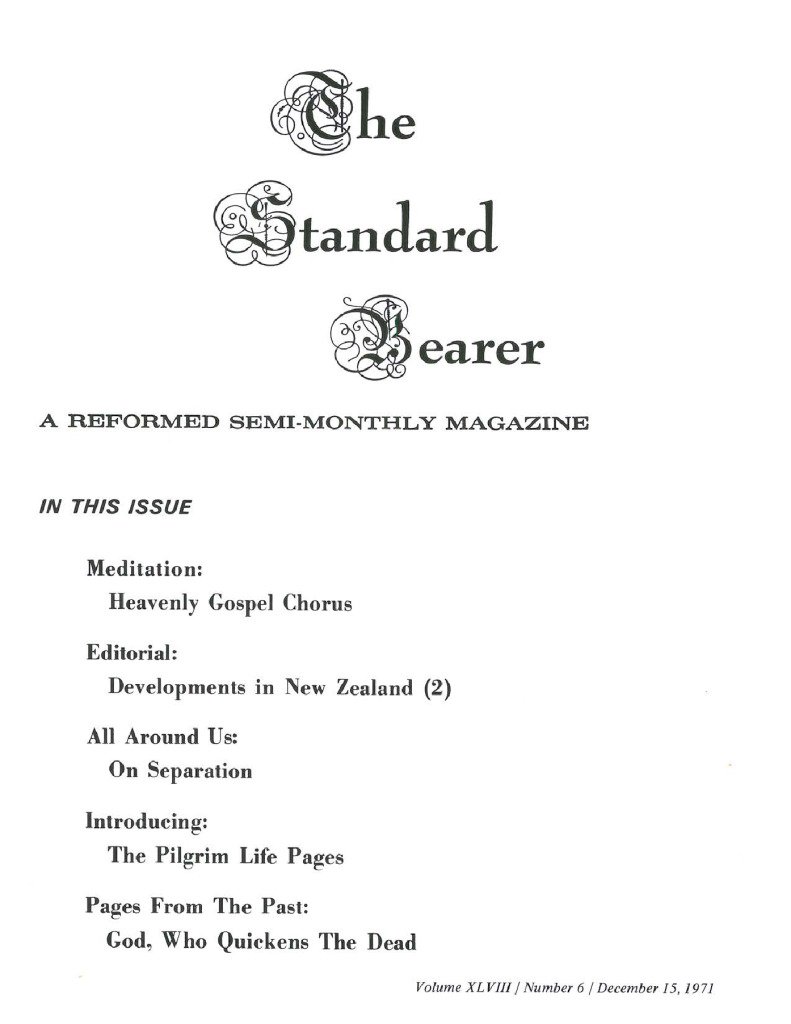