The reader will recall that recently an editorial attempt was made by Dr. Jerome De Jong to put me to bed with Bob Jones. This was done on the basis, undoubtedly, that both Bob Jones, Jr., and I have opposed Billy Graham’s activities.

At the time, I must confess, I was wholly ignorant of the fact that Bob Jones, Jr., (and Bob Jones University) was opposed to Billy Graham, as well as of the reasons for this opposition. Only, from my general knowledge of this individual and this school, I was quite certain that Bob Jones’s bed was too short that I could stretch myself on it, to employ a Biblical figure Recently, however, there has been no small furor, both in the religious and in the secular press, about Billy Graham’s Greenville (South Carolina) Crusade and about the opposition of the Joneses thereto. And through the abundant publicity given to the matter in the press, I have gained information, and, at the same time, an insight into the real nature of said attempt to put me to bed. Moreover, as I had expected, the facts also showed that Bob Jones, Jr., and I were not, unbeknownst to one another, sleeping in the same theological bed.

Meanwhile, this matter of theological beds is indeed more serious than humorous, let us remember. In fact, I would suggest that it can become rather nightmarish, if I may carry the figure a bit farther. Moreover, although I did not state this when I last wrote on the subject, I had the distinct impression that my critic was attempting to sleep in two beds at the same time,—a Reformed bed and a Fundamentalist bed. Now that is, to say the least, rather uncomfortable. Still more, it is utterly inconsistent. Above all, it is highly dangerous: for he who attempts to lie in two beds at the same time runs the risk, certainly, of falling between the two and landing on the floor with a thud. In other words, this all comes down to the same conclusion I have stated before: for Reformed churches to support the teaching and preaching of Billy Graham is to engage in ecclesiastical suicide.

This accounts for my interest in Bob Jones’s bed.

There have been many reports about the rift between the Joneses and Billy Graham. The secular press carried reports about it. In Christianity Today, April 1, 1966, there was a rather slanted report of the Greenville Crusade and of the Joneses’ opposition thereto, as well as an accompanying “news” article which makes several totally irrelevant observations about Bob Jones University. And in Carl McIntire’s paper, Christian Beacon, an editorial is devoted to the same subject, an editorial which makes reference to two (reproduced) Associated Press dispatches, one of which briefly reports the opposition of Dr. Bob Jones, Jr., to Billy Graham’s crusade, and the other of which reports the fact that Dr. L. Nelson Bell (father-in-law of Graham and Executive Editor of Christianity Today) classifies Bob Jones with the Pharisees and a certain Dr. Colin Williams (a liberal, NCC opponent of Graham) with the Sadducees. McIntire, of course, being an arch-opponent of the NCC and WCC and the arch-proponent of the ICCC, supports Bob Jones in this fuss. All these reports, however, were partial. They did not fully state the position of Jones and his university. In one of our exchange papers, The Baptist Examiner, March 12, 1966, I found the complete statement by Jones himself. This was a Chapel Talk delivered by Bob Jones Jr., on Feb. 8, 1965, soon after plans for the Greenville Crusade were announced.

Rather revealing is the introduction which The Baptist Examiner gives to this Chapel Talk:

Both are rankly wrong on many of the great truths of God’s word. On the subject of the church they are farther from the truth than the North Pole is from the South. This goes for the majority of the doctrines of grace. I have heard Bob Jones Sr. make fun of the doctrine of election, from the pulpit, and also the doctrine of security. He claims to believe the latter, but minimizes its worth in a way that makes one doubt how much he really believes this truth.

Be that as it may, though we have differed with these two in many many instances, it is good to see them take a stand against the so-called evangelistic efforts of Billy Graham. I sincerely commend this article and trust that God may bless it to the good of our readers, and I do this with our sincere appreciation to Bob Jones Jr. for having written it.

The Chapel Talk in question is too long to quote here. I will summarize its points and quote as necessary.

1. This attitude of Bob Jones University was first expressed in November of 1956 as an attitude of noncooperation and non-endorsement.

2. This attitude is not based on any personal differences between the Joneses and Billy Graham, but is rather based on Billy Graham’s “ecumenical ‘evangelism'” as being unscriptural. Graham is characterized as guilty of “Scriptural disobedience.”

3. To substantiate this charge, reference is made to the following:

a) Cliff Barrows (a graduate of Bob Jones U.), though formerly “so separated. . .that he did not like to attend a Southern Baptist church,” now “goes anywhere to any kind of church-orthodox or heretic.” Cliff Barrows is the song leader of Graham’s crusades.

b) “Billy Graham has said he would go anywhere under any sponsorship.” And again: “That statement is as broad a statement as one can conceive. He did not say, ‘I would go to any Bible-believing church.’ He said, ‘I will go anywhere under any sponsorship.'” In this connection Jones accuses the Graham public relations department of unscrupulousness, deceit, misdirection, and false statements when they state that Graham does not go under modernistic sponsorship, that he does not “sponsor” them and they do not “sponsor” him.

c) Billy Graham had a Roman Catholic Bishop on the platform in a South American country who made the sign of the cross over the converts as they came forward. In this country Graham called on Cardinal Cushing, who was quoted as saying in effect to Billy Graham, “I am glad to have Catholics go to hear you preach because you make better Catholics out of them.”

d) “Billy Graham went into Southern California and had as honorary chairman of his committee Bishop Kennedy. He is a rank, unbelieving, agnostic, Christ-denying Methodist bishop; and yet Billy Graham’s organization tried to make it appear that his crusade was under the control of Bible-believing folks and that these liberals did not wield any authority. Whether they wield any authority or not, Billy Graham gives them Christian recognition and has them on the platform to pray over the meeting and calls them ‘brother’; and he refers the ‘decision’ cards of the professed converts over to them. That is unscriptural. You are not to turn the lambs over to the wolves. You are to protect the lambs from the wolves.” In this same connection Jones states: “The whole policy of the Graham organization is effective in breaking down all the lines set up between truth and error, between belief and unbelief; and it is contrary to God’s Word, which demands separation.”

e) Jones refers to a personal conversation occasioned by the fact that a film presenting Graham was run in commercial theaters along with regular Hollywood productions. In this personal conversation Mrs. Graham is alleged to have said, “We have made up our minds that we are not to call the righteous but sinners to repentance, and we are going to go just as far as we can as long as we do not lose the prayer support of the Bible-believing Christians.”

f) After warning the students that the Graham Crusade was off limits for them, Jones makes reference to Graham’s associating with Bishop Pike:

You see, they make it appear that we do not want the modernists to hear the Gospel. That is dishonest. That is Jesuit reasoning; that is sophistry; that is deceit. We say, let them go; but let them sit out in front with the rest of the sinners where they are under the gun—not sit on the platform and look pious and try to act as if they were Christians and have Billy Graham say, “I am going to ask Bishop Pike to lead us in prayer.” Pike is the man who says he does not believe the Creed. He “would rather ‘sing it’ than say it.” It is not quite such a big lie if he sings it. Pike sat on the platform in Graham’s Bay area crusade, and Graham publicly congratulated the people of California on this Christian man who was to head the Episcopal Church in that area! Graham sat in a choir stall of the Episcopal Cathedral in San Francisco when Pike was consecrated Bishop—by his presence he approved of this man; and he is the very man who, when Graham had been in New York a year or two before, had made fun of the crusade there. But Pike found it was good “to get on the band wagon.” So he did, and Billy received him with open arms. That is wrong!

Jones concludes by repeating that he cannot support Graham because Graham embraces liberals, the very liberals who persecute those who have stood and fought for the Gospel. And in a final paragraph he explains that if he prayed publicly for Graham the way he ought to, that is, prayed for Graham’s repentance and prayed that Graham might be forgiven for disobeying the Word and for turning little lambs of God over to wolves and for building the church of Antichrist and aiding and abetting apostasy, etc.,—then people would be madder at him (Jones) than if he did not pray for Graham at all.

Such, in brief, was the substance of this Chapel Talk of Bob Jones, Jr.

Whether anyone agrees with Jones or not is not now the question.

But from this speech it certainly becomes evident why Jones does not support and endorse Billy Graham. We may point to the following:

1. There is not a single reference in Jones’s argumentation to Billy Graham’s doctrine. Tacitly the speech assumes, in fact, that’ in his preaching Graham is a Fundamentalist.

2. The thrust of Jones’s attack is against the “ecumenical” character of Graham’s evangelism, against the fact that Graham will accept the sponsorship of anyone, that he will associate with avowed liberals and Roman Catholics in his crusades, and that in, all these policies he is not following a policy of Scriptural separation.

In other words, Dr. Jones claims that Billy Graham is not a good, consistent, separated Fundamentalist!This is the whole burden of Jones’s opposition.

On the other hand, my recent criticism of Graham was:

1. Not characterized whatsoever by references to Graham’s associations with liberals and Roman Catholics and his apparent willingness to be sponsored by anyone at all.

2. But was characterized by criticism of Graham’s doctrine, and that too, from a Scriptural and specifically Reformed viewpoint. On that ground I criticized Graham’s doctrine of the new birth and of total depravity.

And now: who belongs in whose bed?

Certainly, not I in Bob Jones’s bed; nor he in mine!

But as a good Fundamentalist Dr. Jerome De Jong might well ask whether perhaps he should hop out of Billy Graham’s bed and into Bob Jones’s. For from a Fundamentalist viewpoint Jones’s arguments appear to have no little degree of cogency.

Mark you well, I am not trying to put De Jong to bed with either Jones or Graham. He is quite capable, I think, of putting himself to bed. In fact, I would far prefer to see him voluntarily forsake both Graham and Jones,’ and come happily into a Reformed bed,—for example, mine. 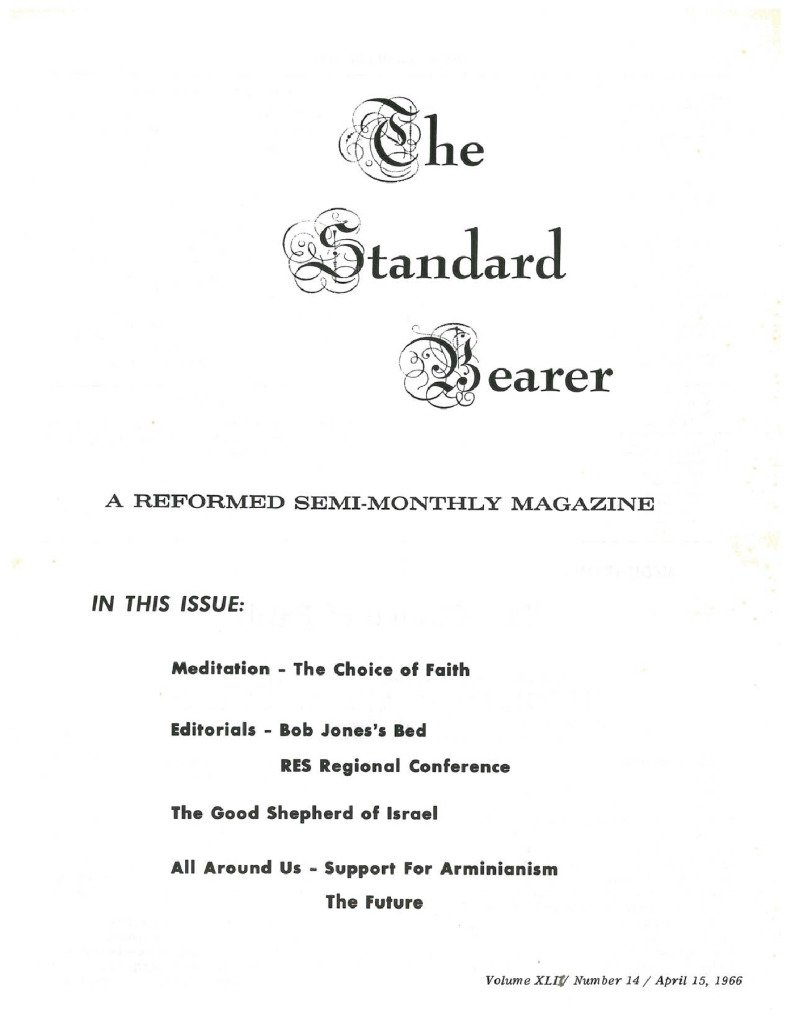