Bibles in the Worship Service

* In the fall of 1989, I gave the address to the annual meeting of the Reformed Free Publishing Association, publisher of the Standard Bearer. This was my first address to the parent body as editor of the magazine – my “inaugural address. ” The group instructed me to publish the speech in the SB. Belatedly, I now obey the order. I have, however, taken the liberty to revise the speech, significantly so in places, as those who heard the speech will discover when they read especially the last two installments. There will be four installments in this series of editorials. We will do our utmost to run them successively. I have purposely refrained from obliterating all evidences that the original mode of this message was that of speaking. The speaking-style has its own force. -DJE

It is being proposed in the church to which I belong to give all our Bibles away. The argument is: Peopleshould bring their own Bibles to church, then they can underline and make notes in their own Bible in the service.

Do any of the churches in the Prot. Ref. denomination have this custom of bringing their own Bibles, with no Bible in the church pews?

First of all, my apologies for not having answered this question sooner. For various reasons, one that I was away from home for four months, second that I do not like to enter into problems being discussed in a local church, I did not give an answer until now.

Whether there are other churches that follow the practice of members taking their own Bibles to church, I do not know of any in our denomination, but that does not mean that there are none.

As to the general question of the propriety of this practice, something can be said for both sides of the question. It is really a matter of preference, since I see no principle involved in this matter. Therefore I can make a few general remarks. Possibly Prof. Hanko will say more about this in his articles on worship services.

To me the main question is this: What can serve best for the solemnity of the worship service and for the edification of the saints through the preaching of the Word?

Years ago, when our services were still held in the Dutch language, it was a common practice for the members to take their own Psalm books to church. Small children received Psalm books as incentive to learn their texts for Sunday School. The older people usually had the New Testament included in their Psalm book, as well as the psalms and the liturgical forms. I certainly do not favor carrying around less than half of a Bible, but this was likely done to avoid making the Psalm book too large and too bulky. My parents were very reluctant to mar their book in any way, but they did have a ribbon or a small card at certain passages which they wished to remember. In the transition from the Dutch language to the English many carried with them a New Testament with parallel columns of the Dutch and the English. Again, too bad that this was limited only to the New Testament, but that was done likely for the same reason mentioned before.

I have seen Bibles that were underscored and had marginal references.

One of them was owned by a girl of Baptist persuasion, and was very neatly underscored, with references written in fine letters in the margins. The underscoring must have been done with a fine pencil and a small ruler. I can see where this can well be done in a catechism class with the Bible lying on the table. One thing struck my attention. There were so very many passages underscored, and so many references in the margins, that I wondered how anyone could keep track of all of them? I also wonder whether all these references will interfere with the private reading of the Scriptures for personal, spiritual edification.

Another Bible was marked with pencils of various colors, crudely underscored and carelessly scribbled, sometimes with large letters, making the notes almost illegible. In one word, it was a very messy Bible, which I would not care to own, much less to take in public. Markings, like friends, should be few and well chosen. Besides, they should be done with utmost care.

In this connection I might mention that there are some who feel that they are benefited by taking notes of the sermon. They say that hereby they can give their full attention to the message, are spiritually edified in a greater measure, and can retain the contents of the sermon much longer. All this seems to be a matter of personal preference.

In any case, we should not lose sight of the fact that the worship services must remain a solemn worship in the communion of saints! 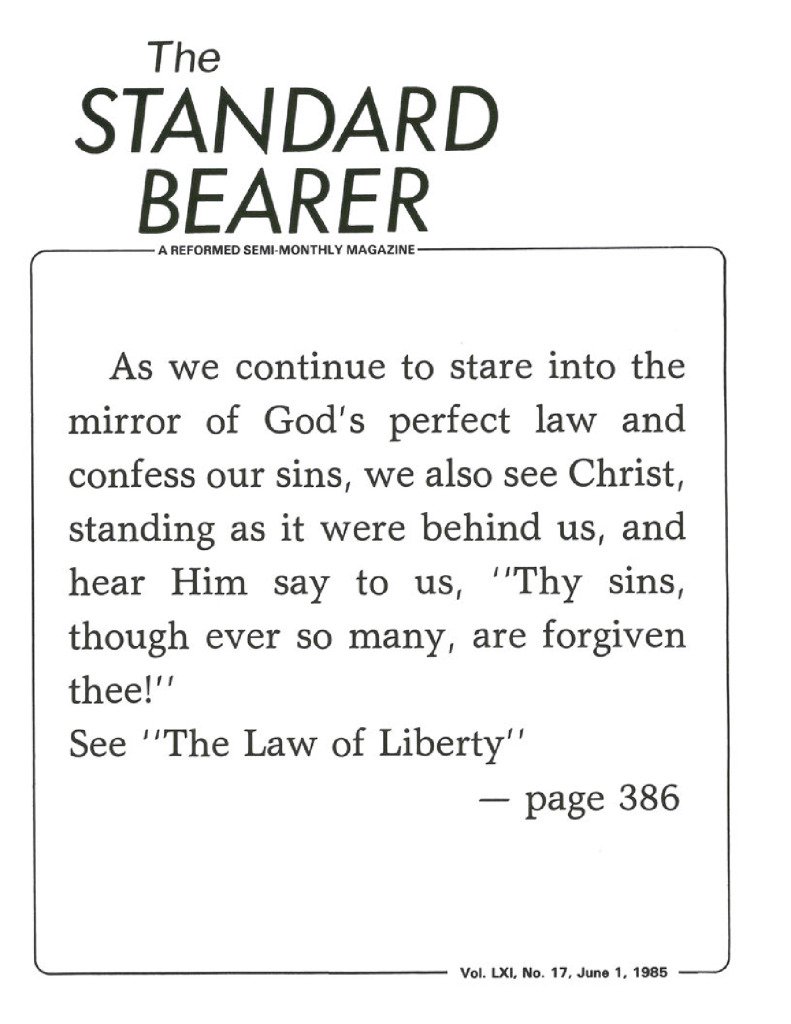