Believing All the Prophetic Scriptures (2)

Believing All the Prophetic Scriptures (2)

The Mystery of the Seventy Weeks in Daniel 9

THE HOLY OF HOLIES ANOINTED

The anointed Messiah came to anoint the “Most Holy”!

There can be little doubt that the term for “Most Holy” in the Hebrew text should be better translated “holy of holies.” In Old Testament language this refers to the part of the tabernacle which was behind the second vail (Heb. 9:3). The writer to the Hebrews explains this as follows: “For there was a tabernacle prepared, the first, wherein were the candlestick, and the table, and the showbread, which is called the Holy place. And after the second vail, the tabernacle which is called the Holy of holies, having the golden altar of incense, and the ark of the covenant overlaid round about with gold, wherein was the golden pot holding the manna, Aaron’s rod that budded, and the tables of the covenant; and above it cherubim of glory overshadowing the mercy-seat . . .” (Heb. 9:3-5). The Holy Spirit says in Hebrews 9:3 that this was called “holy of holies.” Surely this meant to express that here was a place of separation, which was even less accessible than was the holy place!

We ought to notice the following particulars concerning this holy of holies. The common priest could and must enter daily (continually) into the holy place each morning and evening in their courses (Luke 1:8, 9). They stood at the altar of incense offering symbolically the prayers of all the saints. However, they might never enter into the “holy of holies.” Only the high priest might enter here once a year on the great day of atonement in the seventh month and on the fifteenth day! On that day he entered into the Holy of Holies “. . . alone, once in the year, not without blood, which he offered for himself and for the errors (sins committed in ignorance and weakness: agnoeematoon) of the people” (congregation = laos) (Heb. 9:7).

In a parabolical, symbolical manner the people were thus anointed, consecrated into the service and presence of God—represented by the high priest bringing the sacrifice! Once a year the Most Holy Place was anointed from the pollution of our sins which had defiled the holy place. Even the prayers of the “people” as represented in the incense upon the altar were polluted. The best works were all imperfect and polluted with sin! The very high priest who bore the breastplate, representing the twelve tribes, upon his heart, needed to be purified. And, what is more, the very nature of this sacrifice, performed yearly, proclaimed loudly in the heart and consciences of Israel that there was not a sacrifice offered on this day of atonement which could cleanse the conscience from sin; these sacrifices, offered continually, could not “make perfect them that drew nigh”! The sacrifices would not bring about the very perfection, the fulfillment of the law, removal of guilt and pollution, which they portrayed in a symbolical-parabolic way. They could not realize the perfection, the perfect consecration, of the place where God dwells with His people as the Holy One of Israel.

Daniel really confesses this tremendous lack in the sacrifices of the Old Testament temple. Fact is that inJeremiah 31:31-34 God Himself finds fault with the “old covenant” of the shadows and types, does He not? When Israel is carried away into Babylon, and when the temple is burnt, and the holy city and the walls are broken down, then God promises another “covenant”; yes, it will be a new covenant. And the noteworthy element here is that the term (adjective “new”) in the Greek text in Hebrews 9:8 is not the common term kainos, neither naos, but that it is the translation from the Greek verb suntelesoo. This verb really means “to bring to an end, to finish, to complete.” All that was incomplete in the Old Testament “first covenant” will then be completed, will be realized. No more shall it be ours as in a parabolic act, but it will be very really “God with us, Immanuel”, (Ezekiel 48:35).

It will be the realization of the seventy sevens, in the last seventieth “seven” (week).

Yes, as in one mighty chorus we hear Isaiah, Jeremiah, Ezekiel, and Daniel all sing of this perfection of the covenant: God dwelling in His holy place with the lowly of heart. They all speak of that mystery of godliness which is great, as expressed by God Himself in Isaiah 57:15: “For thus saith the high and lofty One that inhabiteth eternity, whose name is Holy: I dwell in the high and holy place, with him also that is of a contrite and humble spirit, to revive the spirit of the humble, and to revive the heart of the contrite”! Isaiah has the ever-pervading theme, “comfort ye, comfort ye, my people and cry unto her that her warfare is accomplished, that her iniquity is pardoned, that she hath received of the LORD’S (Jehovah’s) hand double for all her sins.” Jeremiah speaks of the better covenant, the consummation of the works of God in bringing about eternal righteousness, even calling “Jehovah (Himself) our righteousness” (Jer. 23:6, 33:16). And Ezekiel portrays to us a better city and temple where the glory of the Lord shall forever abide in his temple: “and, behold, the, glory of Jehovah (LORD) filled the house” (Ezekiel 43:1-5).

It is a rewarding experience to study those Old Testament prophecies and to believe them! In all of these we see portrayed the “anointing of the Holy of Holies.”

How does Gabriel show this anointing step by step to Daniel here in Daniel 9:24? As we have attempted to show in this entire study, it is by the way of the blood of the Messiah, the Anointed One of God. He is destined in the Counsel of God to realize that which was “decreed upon thy (Daniel’s) people and upon thy holy city.” And what was decreed by God? It was to finish transgression, to make an end of sins, to make reconciliation for iniquity, to bring in everlasting righteousness, and to seal up vision and prophecy—and to anoint the most holy place!

Thus the covenant is brought to its perfect completion. God will cause his face to shine upon His people and His holy city, Amen. God will then have cut the pieces of the sacrificial animals, parting them in halves, and He will have passed between the pieces, as we read in Genesis 15:17, “And it came to pass, that, when the sun went down, and it was dark, behold, a smoking furnace, and a flaming torch that passed between these pieces”! In that day the LORD (Jehovah) made a covenant with Abram, unto thy seed have I given this land! And Abram believed God and was justified in the blood of the covenant (Gen. 15:6;Rom. 4:1-4). Here David, the contrite sinner, can sing his song of redemption concerning the man who is blessed in having his iniquities forgiven and his sins covered; he can stand before God in the wholly consecrated perfection of His holy place!

There are those who would interpret the “covenant” here to refer to some human covenant, agreement made by some “prince who shall come to destroy the city and the sanctuary” and that after he has wrought his destruction and havoc he will make a binding covenant with Israel, stipulating the mutual terms of agreement. It will be somewhat like the laws of the Medes and Persians which cannot be broken.

However, this interpretation does violence to the sublimity of the term “covenant” in Scripture, as we have shown in our exposition of the work of Christ in “anointing the Most Holy.” It should be borne in mind that we are here dealing with a prophetic word, and that the chronological details are not here spelled out by Gabriel. Rather we have here some historical, future details connected with the coming of the Messiah and the works which He came to perform. There is a close connection between the Cross of Christ and the destruction of the temple in earthly Jerusalem. Christ’s Cross and His sacrificial work at Calvary are closely connected with the final destruction of Jerusalem and the temple. The zeal of the Lord of hosts will perform this (John 2:17)! The LORD in His zeal will perform the breaking down of the temple of Christ’s body by wicked hands (Acts 2:23). However, these wicked hands cannot break down the temple of Christ’s body without the earthly temple becoming a final and perpetual “desolation”¹ (Matt. 23:38, 39). Then God leaves this earthly temple forever, and He leaves this earthly temple at the very moment when Christ gives up His spirit and dies at Calvary (Matt. 27:50-53).

Never before in the history of the temple did God make a complete end, so that His glory was really, radically, and finally departed. Yes, God made an end of the tabernacle at Shiloh when the wife of Phinehas dies in child-birth and names her son Ichabod, saying, the glory is departed. That was when the Ark of God was taken, the place where the Lord dwells in Israel between the Cherubim in the Most Holy. God Himself reminds Israel through Jeremiah of the import of this terrible judgment at Shiloh (Jer. 7:12, 26:6, 9; Ps. 78:60). And we do well to take notice here of the Scriptural-prophetic implications.

However, this was not a full end!

Even later, at the destruction of the temple by Nebuchadnezzar, God did not make a “full end” of Israel. There was even the remnant according to election on the one hand; on the other hand there was ever a future and more glorious revelation of eternal presence of God with His people. With this remnant according to election God wills to dwell forever. This we read explicitly in Psalm 68:16: “why leap ye, ye high hills? This is the hill which God hath desired to dwell in; yea, the LORD will dwell in it forever” (See Deut. 12:5; I Kings 9:3; Heb. 12:18-29). God will make a full end of all the nations which imagine a vain thing against the Lord and His anointed Son, but He will not make a full end of the remnant of Judah and Israel (Jer. 46:26). God will never forsake His people whom He foreknew in elective love. For God’s elective love is the heart of the church, both in the Old and New Testaments. Our fathers called it the Cor Ecclesia. This elective love is the sole reason for Israel’s coming into being (Deut. 4:37, 10:17); it is the great and only sovereign motif for Israel’s continued existence as God’s church in the darkest hours of her history (I Kings 19:18; Rom. 11:1-5); and it is the only reason for the salvation of the Gentiles as they are grafted as wild branches into the tame olive tree of God’s Old Testament planting!

¹ The terms “abomination” and “desolation” are not to be equated with the biblical concept of “tribulation” as is erroneously taught by dispensationalism. These errorists teach that in Daniel 9:27 (a) the seventieth “seven” refers to the time immediately after the secret “rapture” and before the “revelation” which then, according to dispensationalism, ushers in the Millennium. During this so-called seven year period the “great Tribulation” takes place, and all that is prophesied in the chapters 6-16 of Revelation. (b) However, the “desolations” of Daniel 9:27 refer to the ultimate and complete destruction and end of the Old Testament temple and of the Old Testament theocracy. 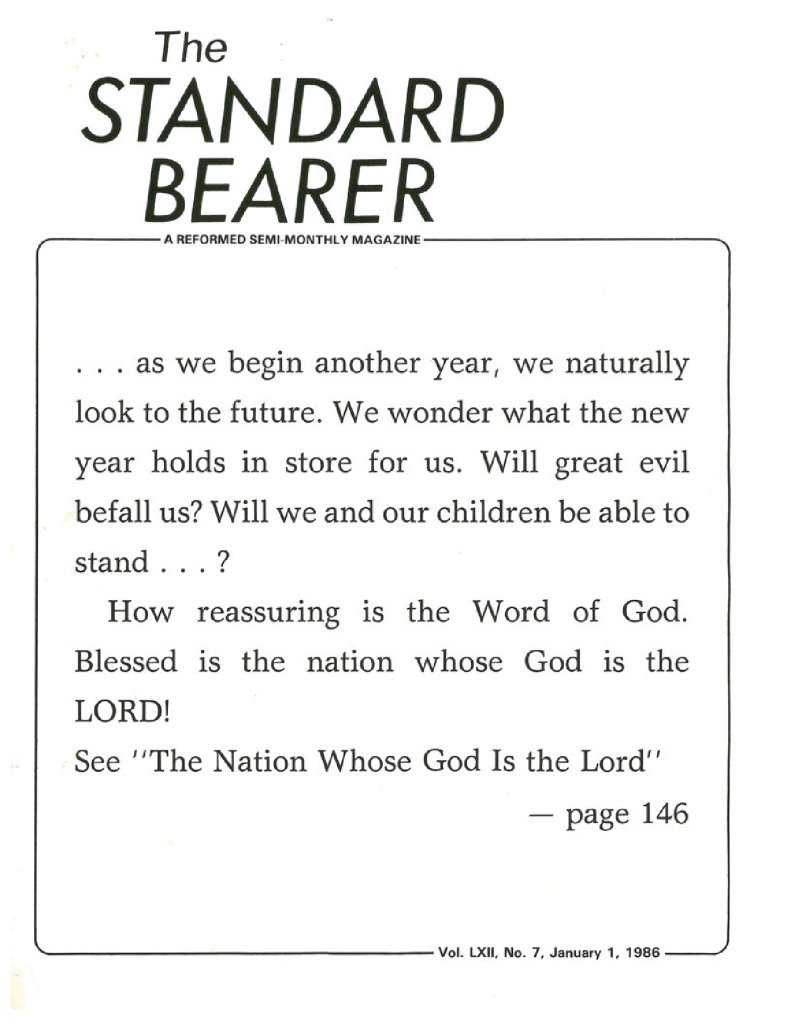