The Mystery of the “Seventy Weeks” in Daniel 9

The impelling reason for discussing this ninth chapter of Daniel in the series of essays on Dispensational Premillennialism ought to be obvious to anyone having but a smattering of knowledge concerning the basic tenets of Premillennialism, particularly in the teaching of the so-called seven years of tribulation. According to this teaching, which we hold to be erroneous, this tribulation period is the time between Christ’s coming in the “rapture,” and His return to raise up the millennial kingdom. This return is denominated “the revelation.”

It is the teaching of Premillennialism, both post- and pre-tribulation, that the Scriptural basis for this teaching must find its bedrock in Daniel 9:27, where we read “and he shall confirm the covenant with many for one week . . . .” This “one week” constitutes the “seven years” of the Great Tribulation, so it is alleged. In view of this strange contention by Dispensationalism it is incumbent upon us to search the Scriptures whether these things are true; whether they are truly a correct interpretation of the word of prophecy in Daniel, as explained by the angel Gabriel to Daniel upon his prayers and supplications.

There is a mighty and positive reason for studying this magnificent revelation of God to Daniel in far-off Media-Persia! It is that these are the Scriptures which are able to make us wise unto salvation which is by faith in Jesus Christ. For let us not forget that in this chapter we are shown the Messiah, the Christ in His mediatorial work at the Cross of Calvary. In this Christ, Jerusalem is saved, and God causes His face to shine upon His sanctuary that is desolate for the Lord’s sake. The Old Testament temple is indeed left “desolate,” with no one to dwell in it. The glory of the Lord was departed from it, even as the glory had departed from Shiloh in the days of Eli (Jer. 7:12, 14; Jer. 26:6, 9). Jeremiah prophesies the word of the LORD, “Then will I make this house like Shiloh, and make this city a curse to all nations of the earth.”

Now we must believe all the prophetic Scriptures!

We must not believe only certain parts which we then try to fabricate into our own humanly conceived constructions. Scripture must interpret Scripture, and we must believe the further interpretation of the prophecy, as God gives added instruction and details concerning the fulfillment of His own sure promise. Even in our refutation of very obvious errors, yea, even heresies, we must so interpret the Scriptures that the truth stands out so sharply and clearly that the errorists must yield the field. Thus did Jesus interpret the Scriptures when He said repeatedly, “have ye not read?” (Matt. 12:5; Matt. 19:4; Matt. 21:42). We could give many, many more Scripture references. Hence, the question is for us to do two things. We must read Daniel 9 well, and we must interpret it according to all the Scriptures!

Our method of discussion will be such that we contend earnestly for the faith which was once delivered to the saints. This does, however, not mean that our writing will be basically “controversial” in nature. We need more than formal polemics. We must contend with trowel and sword, and in that order, too. We must build the temple of truth and keep the work area free from those who will not build according to the plumbline of the Scriptures.

Hence, we must offer positive, constructive exegesis, based on good methods of interpretation and sound rules of hermeneutics. Only thus will we rightly divide the word of truth, so that we shall not be ashamed to present it to God and to His church.

The Historic Perspective of Daniel 9

This historic perspective we are given in the verses 1-2. (I suggest that you take your own Bible and read these two verses, and also that you read the entire 9th chapter of Daniel.)

The first question which should be faced is this: what do I mean with the designation “historic perspective.” When I speak of perspective I am referring to the searchlight of the prophetic word as it shines in a dark place, and as this light continues to shine more and more brightly unto the time when all God’s promises are fulfilled in Christ Jesus. That perspective we will be able to see clearly revealed by God in this 9th chapter of Daniel. The prophecy speaks of the “seventy weeks determined upon thy people and upon thy holy city, to finish the transgression . . .” (Dan. 9:24). Woven into this prophecy we see the fact that all the history of Israel is unto the Seed which must come, the Messiah. Our fathers see here in this prophecy the “Gospel of the Promise,” and rightly so. Here is no mere bickering over words and syllables, but here we see the unerring work of God, who never forsakes His people, whom He foreknew, that is, the elect of both Jew and Gentile.

So much for the term “perspective.”

But we must also notice the term “historic.” The Word of God gives “dates” in the unfolding of God’s counsel. Hence, the prophets are very specific about the time, when they received a revelation from God, if such indication of time is of importance to understand the meaning of the prophetic instruction.

Thus it is here. We are dealing here with “salvation-history”; our Dutch fathers called this “Heils-Geschiedenis.” This is the history of the revelation of the Christ of God, the Messiah, prophet, priest, and king of God. This Messiah is God in the flesh, Immanuel, God-with-us!

When there is a great moment in the fulfilling of this promise, a so-called high-point, something by which the ages will be affected and will ever be remembered, we call this “historic.” Not all that happens in time is historic in this sense! Here we have a great moment in the history of Gods church. We stand here, so to speak, at the crossroads in the history of the Israel of God and of the church of the ages! We stand at that point where in the royal line of the kingdom of Judah the second “fourteen generations” end and the third “fourteen generations” begin, according to Matthew 1: 17. The line runs from Abraham-David-Salathiel. It is the becoming into being of the kingdom, the high-point typically, and thetime of the “dry-ground,” from whence Christ, as the root of David, will come forth in the virgin-birth from Mary.

It is in the year that “Darius the son of Ahasuerus, of the seed of the Medes was made king over the realm of the Chaldeans.” This is the time when Cyrus, king of Persia, will give his decree that the people of God return to rebuild Jerusalem and the holy temple (Ezra 1:1-4). At this time Daniel is an old man already! He was perhaps some ninety years of age. He had been an interpreter of the dreams of Nebuchadnezzar (Dan. 2:36-39; Dan. 4:19-27) and also had interpreted the handwriting on the wall in the festal hall of Belshazzar (Dan. 5:17-31). Daniel stands here as a prophet in the very transition from the time or period of David till the Babylonian Captivity of Judah, to the time when there is the return from the Captivity till the time of Christ.

It is the time predicted by Jeremiah the prophet.

“And the whole land shall be a desolation, and an astonishment; and these nations shall serve the kingdom of Babylon seventy years.”

“And it shall come to pass, when seventy years are accomplished, that I will punish the king of Babylon, and that nation, saith the Lord, for their iniquity, and the land of the Chaldeans, and will make it a perpetual desolation.”

That point in history has come to pass; that prediction of God has been and shall be accomplished.

Hence, it is not merely to the former status-quo of Israel’s typical kingdom-life that Judah shall return, and to the former glory of the earthly temple of Solomon.

It shall be a progressive going forth “till Messiah comes!”

The entire history of Israel and Judah clearly exhibited that the “law” made nothing perfect; all cried with a loud voice for the coming in of a “better hope” (Heb. 7:19). We need a Messiah and a better hope by which we draw nigh to God!

We cannot really doubt that Daniel, when he drew near to God with his supplications, was not deeply aware that from the “desolations” of Jerusalem there must rise a better hope. And when Daniel intercedes before the face of the Lord, it is thus that his prayer is heard and interpreted by God Himself, and He sent Gabriel to interpret the meaning of the Captivity for “seventy years” by the unfolding of the message of the “seventy weeks,” or, better, the “seventy sevens.”

Such is the historic perspective here in Daniel 9.

The “Books” by which Daniel Understood The Duration of the Desolations

It is a remarkable fact that here in Daniel 9:2 is the only instance in which the plural is found for the Hebrew word for “book”: sepharim. In legions of other passages we find the noun “book” in the singular. To cite just a few we call attention to “book of the generation” (Gen. 5:1); “book of the covenant” (Ex. 24:7); “book of life” (Ex. 32:32, 33); “book of the law” (Deut. 30:10;Deut. 31:26); “book of the Chronicles” (II Kings 1:18). These were all smaller books, which were incorporated by the Scribes in the Sacred Canon. However, the term here (“books”) must refer to all the Scriptures which were in existence in the days of Israel’s “desolation” in Babylon for seventy years. Surely Daniel was an ardent student of Moses, the Psalms, and all the prophets which were before him. And these “books” he must have studied in view of ascertaining the time and the manner of the time of the sufferings to come upon the Messiah and concerning the glory to follow (I Peter 1:10, 11).

Daniel had the Spirit of the Most High God in him.

So true was this that, even as Joseph in Pharaoh’s court, so Daniel stands here in the court of the earthly ruler of the world as God’s prophet.

He stands here with the “books” in his hand and reads and studies them with the deep yearning in his heart that God may fulfill the promise made to the fathers of old. And, whereas Daniel believes the Scriptures, he tries to understand and interpret them. In a sense he attempts to penetrate into the impenetrable mystery which still shrouds the future fulfillment. One thing Daniel knew: the Lord was going to perform great things. The Lord had given great and precious promises, and soon the horizons would lift on the heavens; God would break through the heavens and He would “visit His people” in mercy!

For a Bible-believing man is a Bible-praying man. 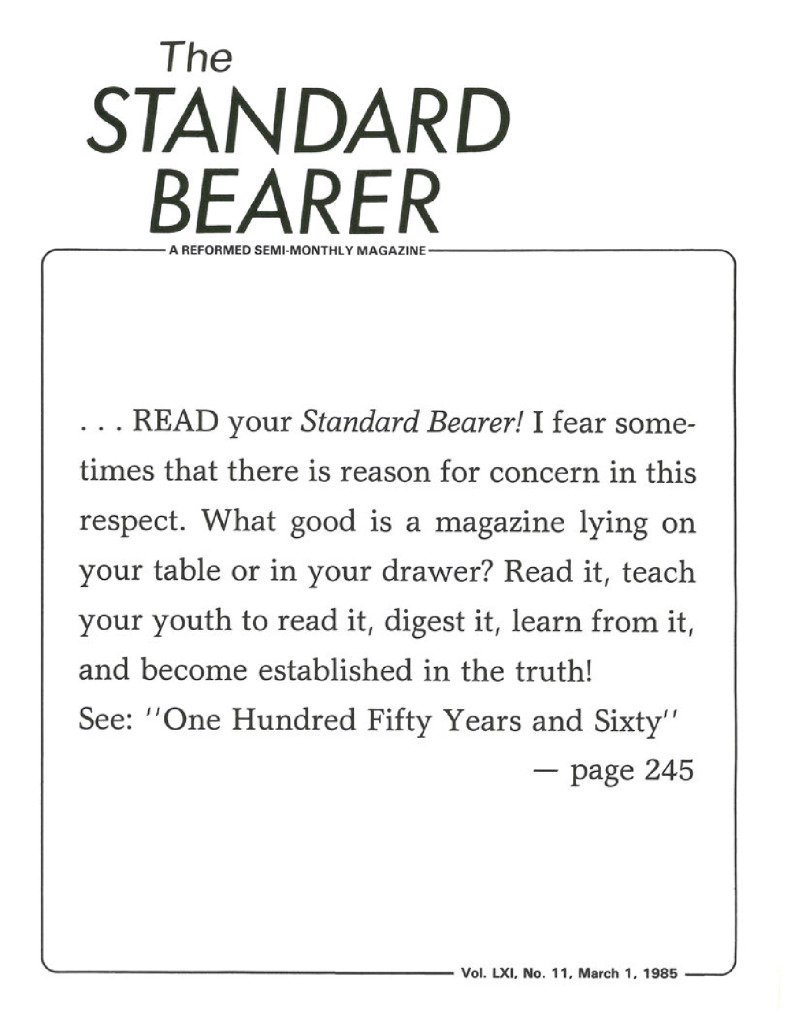