Believers and Their Seed, Covenant Children Who Die In Infancy (Continuation of Chapter XI)

Believers and Their Seed, Covenant Children Who Die In Infancy (Continuation of Chapter XI)

Hence, rather commonly an entirely different consideration is adduced, namely, the fact that the Lord takes such children away in their early childhood. Not so much the covenant as the fact that they are taken away in infancy is then the ground upon which they wish to assume that such children are saved. Now there is indeed a certain validity in this consideration. The reasoning is that one knows nothing else of such children than that they were brought by God into the sphere of His covenant, that they were in no position whatsoever to set themselves against that covenant, and that if it is God’s purpose with the reprobate children of the kingdom that in them sin shall be fully manifest as sin, then this purpose is surely never reached in those little ones who die. And therefore one would rather judge that such children are saved, exactly because of the consideration that the Lord took them away. But although there is indeed something attractive about such reasoning, it will nevertheless have to be admitted that at this point all Scriptural light is lacking. To a sure declaration that all children of the covenant who are taken away in early childhood are saved one can never come along the path of such reasoning. It remains rather a judgment of love than a well-founded item of confession.

Further, appeal is also made to a few expressions of Holy Writ which might seem to shed light on this problem.

In the first place, some like to point to the words of David when the child which he ‘had begotten by Bathsheba was taken away by the Lord. As long as the child was still wrestling with death, the king fasted and wept. But as soon as the child was taken away, the king arose and washed himself and anointed himself and changed his apparel, in order to go to the house of the Lord and worship. And when his servants do not understand this and question him about it, the king answers: “While the child was yet alive, I fasted and wept: for I said, Who can tell whether God will be gracious to me, that the child may live? But now he is dead, wherefore should I fast? can I bring him back again? I shall go to him, but he shall not return to me,” (II Samuel 12:15-23). Especially from these last words some would draw the conclusion that David lived in the conviction that his child had gone to heaven. Now everyone will have to concede that this is a very weak basis on which to build the proposition that all baptized children who are taken away in their childhood are saved. In the first place, it is by no means exegetically certain that David here is thinking of heaven. When he says, “Can I bring him back again?” it is very plain that he is simply thinking of the state of death, and of nothing more. That death is decisive. His fasting and weeping would, from that point of view, be an indication of rebellion if he would continue it also after the child had died. That he does not want. He will submit himself to the Lord and give himself over to Him. But when immediately thereafter it also follows, “I shall go to him, but he shall not return to me,” then it is exegetically improper to think of anything else than of that same state of death. David evidently wants to say that he also will enter into that state of death, that he is journeying toward that same grave, but that the child shall not return out of the grave to him. But even if you would understand the passage differently and accept the idea that the king here actually is thinking of the state of glory, then there is still no ground here for the general proposition that all baptized children who die in infancy are saved. At best one might draw the same conclusion as that which appears in Article 17 of the First Head of the Canons of Dordrecht, namely, that godly parents ought not to doubt concerning the salvation of their children.

Some have also pointed to the example of Abijah, the son of Jeroboam. We are all familiar with the history. Abijah was sick; and Jeroboam sent his wife in disguise to Ahijah the prophet, in order to find out what would become of the child. And with respect to his sick son, the following is prophesied by the prophet in the name of the Lord: “Arise thou therefore, get thee to thine house: and when thy feet enter into the city, the child shall die. And all Israel shall mourn for him, and bury him: for he only of Jeroboam shall come to the grave, because in him there is found some good thing toward the Lord God of Israel in the house of Jeroboam,” (I Kings 14:12, 13). From this some would draw the conclusion that the Lord takes away children in their youth when He beholds some good in them toward the Lord. Now it strikes one immediately how weak suih a proof is as a ground for the proposition that all the children of believers who die in infancy are saved. For, in the first place, we have the instance here of an ungodly king, not of a godly parent. Besides, the Lord does not say that He takes the child away because there is some good found in him toward the lord, but that for this reason the child, in distinction from the rest of Jeroboam’s house, shall come to the grave. Of how little validity it is, then, to conclude from this that when the Lord takes out of this life a child of believing parents, he has seen some good in that child. Much rather would this incident lead one to the conclusion that the Lord takes away children of ungodly parents in their youth because He sees some good in them. 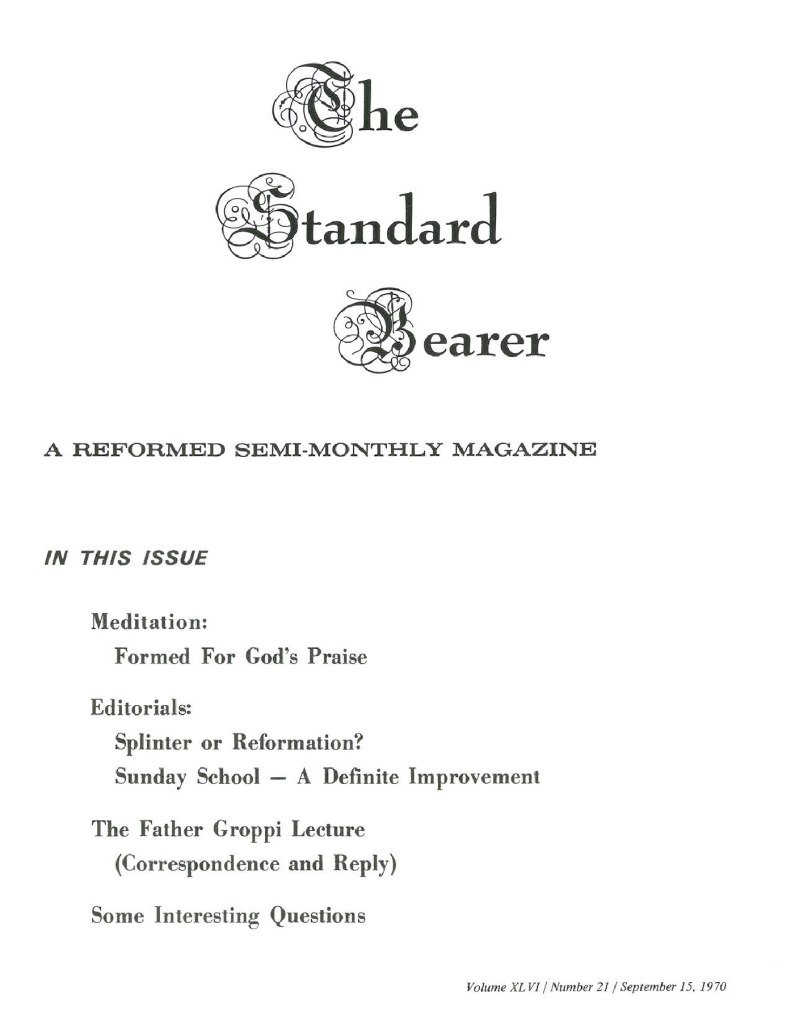