Believers and Their Seed, Chapter VII: In The Line Of Continued Generations

Believers and Their Seed, Chapter VII: In The Line Of Continued Generations

That the Lord establishes His covenant with believers and their seed in the line of continued generations, and that therefore the little children of believers, as well as the adults, are comprehended in the covenant and church of God and ought to receive the sign of the covenant; that, moreover, this sign of the covenant under the Old Testament was circumcision, but that this sign has been replaced in the new dispensation by that of holy baptism,—all this is confessed by the Reformed churches and constitutes one of the fundamentals of the Reformed faith.

We may add to this at once that this truth is so plainly revealed to us in God’s Word that it is a cause of wonderment that so many are blind for this fundamental thought of God’s revelation. And it is then, when men begin to understand less and less of God’s Word as an organic whole and become an easy prey of those who quote Scripture at random and seek their strength in the citation of a few isolated texts, without regard to the great controlling idea of Holy Scripture, that they also become blind for this truth. For a time they may still present their little children for baptism out of the strength of tradition; but they no longer live from the covenant idea. And the more serious souls, who find it impossible to live out of dead tradition, but who nevertheless do not understand the rightness of infant baptism, then very readily turn toward all those movements which acknowledge only the baptism of adults. Those, however, who understand God’s Word and see the great line of the development of God’s covenant in history as it is drawn for us in that Word cannot hesitate for a moment with respect to the confession that believers ought to baptize their seed. Infant baptism is not a matter of lesser importance, but of the greatest moment. He who does not acknowledge it or who belittles it shows thereby at the same time that he does not understand the great and basic idea of God’s Word.

That also infants of believers are comprehended in the covenant and church of God is taught us, first of all, by the history of that covenant of God as it is recorded for us by the Lord Himself in His Word. For that history demonstrates repeatedly that God caused His covenant to develop in the line of successive generations. This holds true with respect to the period of the new dispensation as well as of the old dispensation; and in the latter, it is true of the period before Abraham and Israel as well as of the period during which Israel as a nation was God’s covenant people. This is simply a fact of history.

Those who do not want infant baptism and who have no eye for this continuity of God’s work in generations and who separate the new dispensation from the old like to limit themselves, as far as this question is concerned, with respect to the entire period before Christ to Israel alone. It is true, so they will concede, that in the case of Israel (or, taken more broadly, with Abraham’s seed) God established His covenant in the line of fleshly generations. That was then also a national covenant. Israel was, and still is, a privileged nation, with whom also in the future the Lord will again deal in a special manner. But at the dawn of the new dispensation, such is their presentation, the historical line of that old covenant was broken off; and what held true of that covenant with a view to the seed of believers now no longer holds true in the new dispensation of the church of Christ and her seed. Then the rule was that whoever was out of Israel was in God’s covenant and had to be circumcised. Now the rule is: he that believeth and is baptized shall be saved.

Meanwhile, they forget that the line which they take up out of Scripture at Abraham and Israel nevertheless did not have its beginning at that point, but goes back to Adam. Back to Abraham stands Shem, and back to Shem stands Noah, who by way of the line of Seth takes us back to the very first beginning of the history of God’s covenant in the world. Israel is not a mere drop of oil on the waters of history. The line of God’s covenant in the old dispensation is one. There is difference in dispensation because there is progress in God’s work; but it is always the same covenant that God establishes with His people throughout the old dispensation. 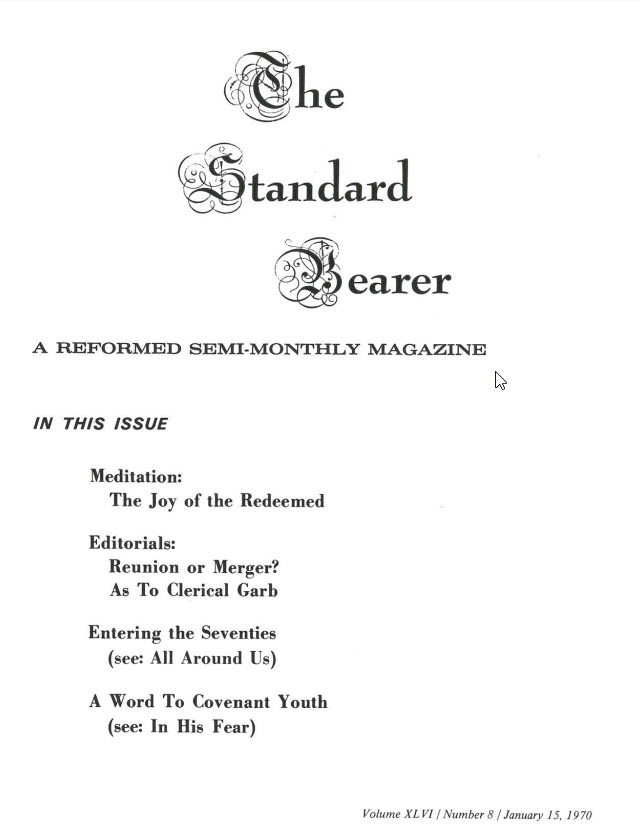