Believers and Their Seed, Chapter V (continued): The Meaning of the Covenant

Believers and Their Seed, Chapter V (continued): The Meaning of the Covenant

But matters surely do not stand thus. Adam in Paradise stands in God’s covenant. He also possesses life. Moreover, only in the way of obedience will he be able to keep the life which he possesses. But eternal life is neither in him nor of him. That is life such as the elect can receive only from Christ, Immanuel, God with us. As far as Christ stands above Adam, so far stands the life which we receive from Christ above the life which Adam possessed or ever could possess. And what Christ merits for us Adam could never obtain.

However this may be, Adam stands in God’s covenant. He was created as covenant friend-servant, adapted to God and to fellowship with Him. For God created the first man after His image and likeness. He is indeed of the earth, earthy: for God formed him out of the dust of the ground. But although by virtue of his creation he stands related to the earth, especially to the animal world, and is himself earthy, he is nevertheless at once distinct from that world and is formed as a creature who also stands related to God. For, in the first place, God did not only call him forth out of the earth, as He had done with the animals, but He formed him with His own hand. And, in the second place, while God thus fashioned him as respects his earthly nature and form, He breathed into his nostrils the breath of life; and thus Adam became a living soul. Through this creative; formative, and life-inbreathing act of God, Adam becomes the creature who bears the image of God in his very nature. There is in Adam a creaturely likeness of God. He is adapted to God. In distinction from every creature round about him, he is the creature who can know God and speak with Him, who can love God and live in His communion, who consciously and willingly can consecrate himself with all his powers and with all that he has to the God of his life. And not only is he a creature who is adapted to God’s covenant life and who can live that covenant life; but he is also at once placed in that living fellowship of God’s covenant. For he is by God gifted with true knowledge of God, righteousness, and holiness. Adam is not neutral, but he stands with his face toward God and is God’s friend. Accordingly, God also speaks with him in Paradise and demands of him that he shall consecrate all things to Him. And as friend-servant of God Adam is also king, and he receives dominion of the beasts of the earth and over the fish of the sea and over all earthly things. God established His covenant with Adam, and in the first Paradise man stands in that covenant of friendship as prophet, priest, and king. God dwells with Adam in Paradise, and in God’s fellowship Adam can and may eat of the tree of life in the midst of the garden.

Besides, God also immediately reveals His covenant in the first Paradise antithetically, and Adam becomes of God’s party. For the Lord God places in the garden the tree of life, but also the tree of the knowledge of good and evil. Presently the word of the devil comes in connection with that tree, putting itself over against the Word of the living God. And Adam stands before the calling, as the friend of God, to reject all that is not of God, but against God, before the calling to fight against and overcome the Evil One and to maintain himself as friend-servant of the living God. And this Adam was able to do: for he was good and created after the image of God. Only by an act of his own will could he turn away from the living, to become the friend of God’s enemy. Spiritually and ethically Adam possessed all that was necessary in order to stand and to do battle for God’s covenant and God’s name in the first Paradise. For God had indeed conceived of something better for His people, and presently Adam falls according to the counsel of His will, and the fall of Adam, the devil, and sin immediately serve that counsel; but that does not change the fact that God had bestowed upon Adam excellent gifts, and that sin remains an act of his own will. Servant of the Lord, friend of God, of the party of the living God over against the devil,—such was Adam’s covenant relation to his God in the first Paradise.

Now to this we must immediately add that this so-called covenant of works is not the ultimate form of the revelation of the covenant as God had conceived of it from before the foundation of the world. We repeat: Adam did not possess the highest life of the covenant of God, nor could he ever have merited it or obtained it for himself and his descendants. The first man is of the earth, earthy; only the second man is the Lord from heaven. The first Paradise is therefore also only an image of the heavenly, even as also Adam. was a figure of Him Who was to come. And the tree of life is an image of the tree of life that is in the midst of the Paradise of God. Adam was also made a little lower than the angels, and heaven and earth were not united in his name. He was indeed king, but not over all things. He was king of an earthly realm. In all this there lay an image of better things. For God had in mind something better for us. The first man, who was of the earth, earthy, the first Paradise, and all that stood in connection with that beginning of the revelation of God’s covenant must therefore also be removed, in order to make place for those better things. For it was the secret purpose of God to perfect all things and to establish His covenant forever, not in the first Adam but in the second, not in the earthly man but in the Lord from heaven, in Immanuel, God with us. And the realization of this purpose, according to the counsel of God, lay along the deep way of sin and grace.

Chapter VI: The Historical Realization of the Covenant

Essentially God’s covenant is not a promise, although all the promises of God for His covenant people in Christ are Yea and Amen. Neither is the covenant merely a way unto salvation, although God out of free grace bestows the blessing of eternal life upon His covenant people, a blessing which is enjoyed exactly only in the fellowship of that covenant of God. But essentially God’s covenant is the relation of friendship between God and His people according to which God is the Friend-Sovereign of His people, and they are the friend-servants of the Lord.

Thus Adam stood also as God’s covenant friend-servant in Paradise. Unto that purpose he was created after God’s image, so that he possessed that creaturely likeness of God which was necessary to enable him to live in that covenant relation with his God. From the outset, then, he also possessed true knowledge of God, righteousness, and holiness. He was not merely. a creature who was adapted to God and who might along a certain way enter into God’s covenant; but he had received from his God all that was necessary in order to stand and to live in that covenant. It is not true, therefore, that in that covenant of God Adam had to earn anything, no more than that should ever be possible. It is not possible to speak of merit on the part of man in his relation to God, Fact is, also Adam stood in Paradise as a creature of God; and as such he possessed nothing which he had not received and which did not belong to his God. His body and his soul, his mind and his will and all his powers, his gifts and-his talents,—everything belonged to the Lord his God, in order that he should know Him, and love Him, and serve Him with all his strength. With those gifts and powers and talents Adam lived and acted in the midst of God’s works in Paradise the First. Round about him there was nothing which was not the Lord’s property. How, then, seeing that he himself, with all his powers, was the Lord’s possession, and seeing that everything round about him equally belonged to the Lord,—how, then, would he ever be able to bring anything to the Lord or to merit anything with Him? No, out of free grace the Lord had created him and supplied him with the excellent gifts which he possessed; and out of free grace the Lord had created him exactly thus, that he might be able to dwell with his God in the covenant relation. Out of free grace he was also actually placed in that covenant relation to his God. And in that relation he also possessed life, and could eat of the tree of life which was in the midst of the garden. He could indeed forfeit that life and lose it, but of a meriting of life there was no question. He would, indeed, in the way of obedience keep that life which he possessed and would not die. But although he was in every respect adapted to live with his God in everlasting bliss, that he could also become a partaker of the higher life and the heavenly glory and bliss which Holy Scripture calls eternal life, of this we read absolutely nothing in God’s Word. Not only could Adam never merit this eternal life, but it is also a life which could never flow to us from him, but which could be our portion only from Immanuel. For the first man is of the earth, earthy; the second man is the Lord from heaven. And the earthly Adam is indeed a figure of Him Who was to come; but the former can never be compared with the latter in glory. And as highly exalted as the Second Adam is in splendor and glory, in grace and majesty and life, so much more glorious is also the life of God’s covenant as we become partakers of it through that Second Adam. 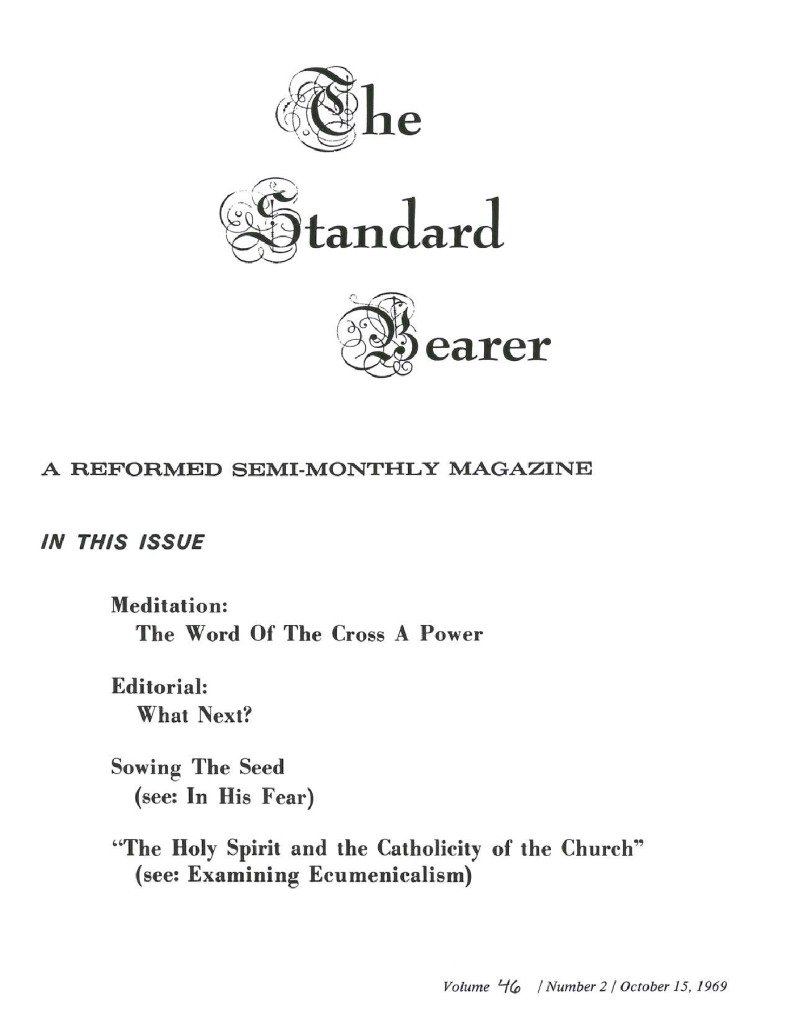