Believers and Their Seed, Chapter II, Arminianism Injected Into the Covenant

Believers and Their Seed, Chapter II, Arminianism Injected Into the Covenant

But in the way in which Prof. Heyns wants to explain this part of the Baptism Form a very strange conception is distilled from it. However, it is very plain that this conception of Prof. Heyns is forced upon the Baptism Form. This Form certainly furnishes no basis for the professor’s conception of the covenant. How would the professor, on the same ground and with the same conception in mind, nevertheless be able to take the language of the Thanksgiving Prayer of this same Form upon his lips? There we find this language: “Almighty God and merciful Father, we thank and praise Thee, that Thou hast forgiven us, and our children, all our sins, through the blood of thy beloved Son Jesus Christ, and received us through thy Holy Spirit as members of thine only begotten Son, and adopted us to be thy children, and sealed and confirmed the same unto us by holy baptism.” This language certainly does not allow for a two-fold interpretation. The church here does not give thanks for something which the Holy Spirit will do, but for an accomplished fact. God has through His Spirit received us as members of His Son and has adopted us to be His children. Here there is mention not of a right to the application of salvation, nor of a conditional promise; but here is a work which the Holy Spirit actually performs and applies to us. No, neither in the confessions nor in the liturgical forms can the professor find any support for his conception of the covenant of grace.

But also in Scripture this presentation finds no ground. According to Professor Heyns, the essence of the covenant is the promise. According to his conception, moreover, all the children of the covenant in the outward sense of the word, head for head, have a part in this promise. God bestows upon them all the promise of the covenant. Hence, too, they are all really children of the promise, according to this presentation; and as children of the promise they all very really have a part in the covenant of grace. Now this is precisely not the presentation of Holy Writ. In fact, the Word of God literally contradicts this. This is the plain teaching of Romans 9. In this chapter the apostle does not speak in general about election and reprobation, but about election and reprobation as these cut directly across the line of the historical manifestation of the covenant and make separation. The subject is Israel of the old dispensation. It seemed as though God had cast away the people whom He had once chosen as His heritage. For what had become of by far the largest part of Israel? As nation they were rejected and had served out their time. And the great majority of them also did not enter into the salvation of the new dispensation. The question therefore arose whether God had abandoned His people, whether the Word of God was fallen out, vs. 6. Was it thus, that God had promised something which He did not fulfill? Was His Word become of none effect? This would exactly be the case if the matter of God’s covenant were as Prof. Heyns wants to present it. Then all would have obtained the promise; then all would have been children of the promise who were called the seed of Abraham according to the flesh. And then, surely, the Word of God would have become of none effect, seeing that all did not obtain the fulfillment of the promise.

On the basis of Scripture and also on the basis of the Reformed line of thought, especially as the latter is set forth in our Baptism Form, we may, therefore, first of all, come to the negative conclusion that the presentation of Professor Heyns is to be rejected. The essence of the covenant does not consist in a promise in the sense of a general offer. All the children of the flesh, or rather, all the outward children of the covenant, all “covenant members” (“bondelingen“) do not receive a certain life. God does not promise salvation in Christ to every child of believers. No more than there is a general offer in the preaching to everyone who hears, no more is there such a general promise in God’s covenant. This presentation must be totally rooted out. It lies wholly in the line of Pelagius and Arminius. 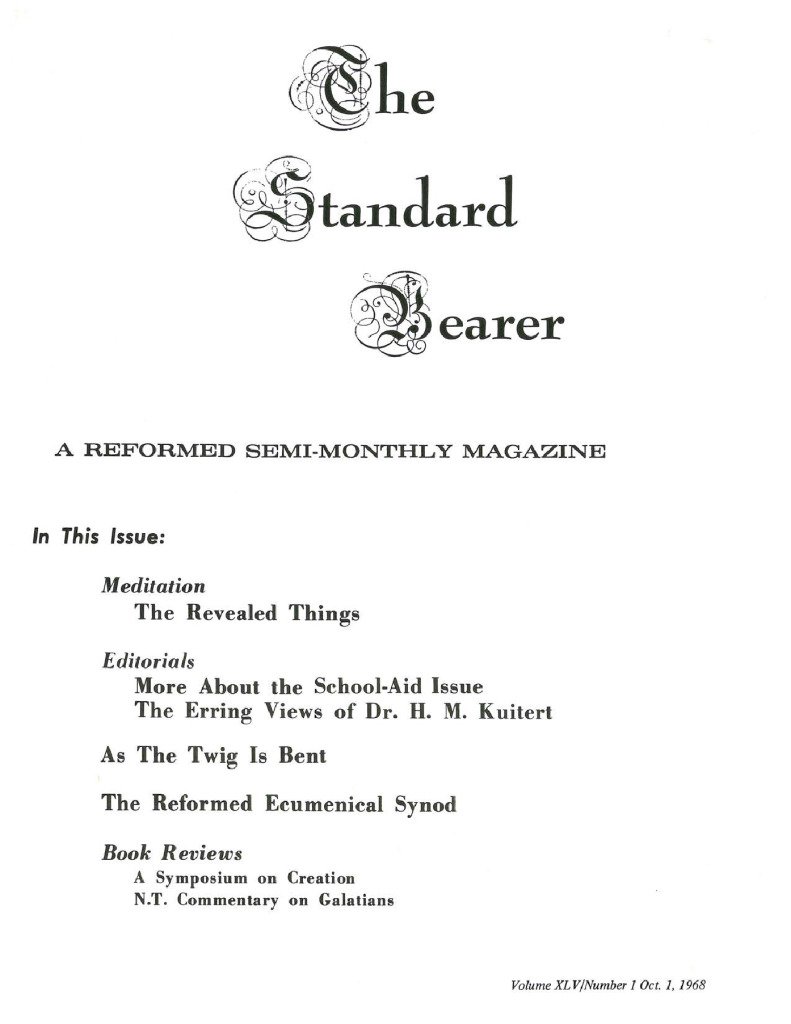